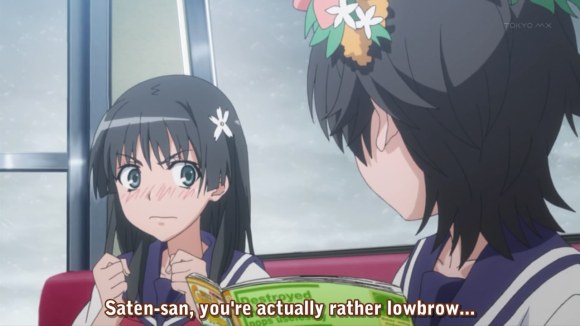 Another episode of railgun about eating sweets and girl on girl crushes and wacky antics, whoo. For a second there before the OP animation I thought the show had developed a story, but nope. Railgun remains K-on! with psychic powers instead of instruments. It’s always hilariously pathetic when bloggers insinuate that they will ‘drop’ a show if changes aren’t made, as though that was a threat with some kind of weight, but no matter how well-animated it is or how interesting the setting this show is not going to be worth watching without a plot.

SZS never had a plot, but that didn’t stop you from watching it. :v

SZS was funny though! And yeah I’m done with Railgun till the end of the season unless something interesting happens to it.

NO ITS NOT OKAY! Believe in the Railgun that believes in the Yuri! Eh, the end of the episode hinted at the climax of the series. So there’s hope yet!

Usually shows without a clear plot have interesting (enough) characters or comedy material supporting them. I’ve gotta say, though, this episode had absolutely nothing to do with anything and they made it up, so now I’m kinda scared about the direction this show’s going to take. I mean, yeah 3 episodes that are not out of the manga plot doesn’t mean it’s going to deviate completely, (I’m sure that’s what the FMA Manga fans thought too,) but maybe that means it might end up longer and more pointless that what it’s supposed to be. Honestly at this point I just wish they would focus more of their time and talent on making a second season for Majutsu no Index instead. They’ve got more material to work with than on this.

Three episodes is a long time to put off introducing a plot. The extent to which the show so far has focused on underwear is to me a credible signal that it’s gonna suck, Index wasn’t innocent of moe but it did seem to be mostly about magic and technology and action. A real sequel or even just a sibling series to that show would be infinitely preferable to this mess.

Can someone please tell me why otakus and others think this show is moe? Isn’t it supposed to be about characters with excessively cute, humongous eyes. Their eyes aren’t that cute. And it’s not like they spend every waking day dressing up in cosplay or what not.

And if this show was moe, why didn’t they list it on tvtropes? So as such, I don’t consider Railgun to be a moe show.

Is there even an international definition for moe? I always thought it was an artstyle with girls with massive eyes.

It’s a loan word, or would be if it were even a real word in Japanese and not some made-up fan term, so individual definitions will vary. I guess what is implied by the use of it here and in the title of the blog it would be something like “a trait given to fictional characters meant to appeal to the lowest common denominator; generally related to helplessness or immaturity (see tsundere)”.

Umm. I don’t see how tsundere are helpless given at least from the shows I’ve seen FSN (Tohsaka Rin) they tend to be powerful and capable women. And hell, the guys are the ones in the helpless position with tsunderes (Love Hina).

This isn’t much as a defence of the show’s merits, but I’m finding Railgun to be steady as an ‘anime for when I don’t like anime’. I requires no thought, it has lots of movement and attention to detail, it is extremely well paced. Where K-On was a sort of eventless rambling Japan-flavoured comedown show for finishing off marathons, Railgun functions as a sort of sugary burst of nonsense that leaves me sated in twenty minutes. Choicest trash for a while methinks.

Eh, if you’re willing to watch trash then yeah it’s very well-animated trash, but just like Code Geass it represents a huge waste of money and talent for such a worthless piece of fluff. And it’s a little worrying to think that what used to be an action franchise could just be seamlessly converted into moe. What’s to stop the tide of moe from washing away other beloved series? We are on a slippery moe slope, that’s all I’m sayin’.

The “plot” setup has begun in Episode 4, and there’s more Touma from To Aru Majutsu no Index. The overall episode is just a lead-in, though, but it’s one of the better episodes of the show. They’re at least trying now. (Just thought you might like to know in case you didn’t bother to watch it.)

Ugh, I don’t know which I hate most; lesbian molestation or godamn tsunderes. But now thanks to the magic of To Aru Kagaku no Railgun, I don’t have to pick! Episode four is the show transitioning smoothly from bad to worse, I’d post about it but I promised myself I wouldn’t stalk this one with weekly hate-filled screeds like I did Tokyo Magnitude.

While on the topic of lesbian molestation played for laughs if that isn’t to your taste, how about other unrequited relationship as comedy?

For example in APH.

Belarus and Russia
Korea and China or Japan

Ah kay. Well I guess it’s a YMMV joke. I think I’m able to enjoy it as I tend to watch entertainment and ignore whatever issues arise in regards to it and just focus on whether I’m entertained or not (I.E the whole anti Catholicism boycott issues with Golden Compass).

But really, I don’t mind it too much as it’s just another take on the recurring jokes in anime involving character lusting after another person only to be ignored (Sanji, Brock). Only with TAKR, it’s played to such ridiculous extremes (there’s a reason why MikotoxKuroko ain’t working, Kuroko) that I find it refreshingly hilarious. Same goes for Hetalia only with Russia/Belarus this recurring joke has new meaning to it as a satire of their foreign relations.

And ironically, Kuroko’s over the top behaviour seem to have earned her some actual lesbian fans.

[…] already made myself clear on how much To Aru Majutsu no Index’s spinoff, To Aru Kagaku no Railgun sucks, and I stand by […]

Leave a Reply to The Fin Cancel reply