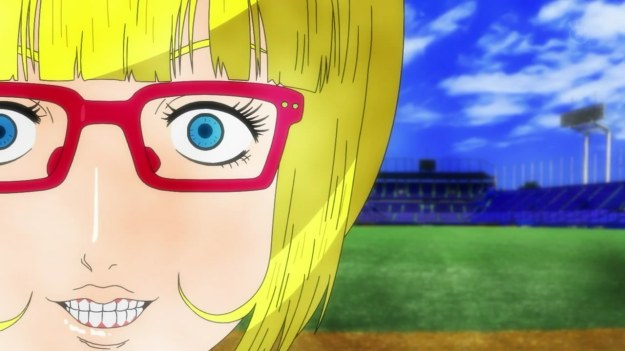 I’ve said a number of nice things about Trapeze (a.k.a. Kuchuu Buranko), but in the end the novelty factor of seeing an anime that doesn’t explicitly pander to 2D kiddy fiddlers isn’t enough to sustain my interest. Trapeze wants to be different, you can see it trying with the whacky visuals and the characters that aren’t big-eyed moeblobs or generic self-sacrificing shounen leads.  It even tries to develop some subtext and symbology beyond the third grade reading level stuff you normally see in TV anime. 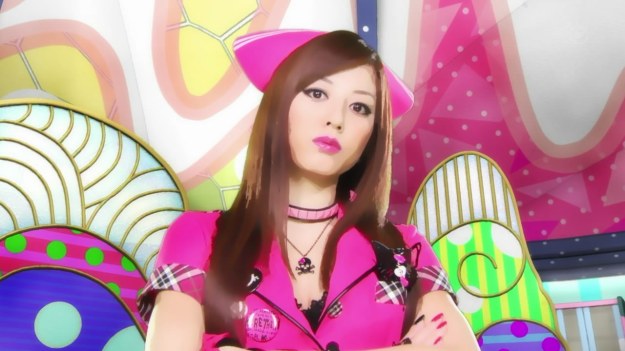 But so what? Stripping away the boilerplate anime dross and creating some visual metaphors is a nice start, but as E Minor suspected from the beginning, Trapeze doesn’t really have much to offer as a replacement. Are we just going to see an endless procession of repressed patients stumble around stupidly while the doctor makes snide remarks at them until they have a flash of insight? I thought the show was about psychiatry, but I’m not really seeing a lot of commentary about the profession, or about the way the mind works (unless the concept of denial is completely new to you). Half the time the patients seem to just cure themselves. 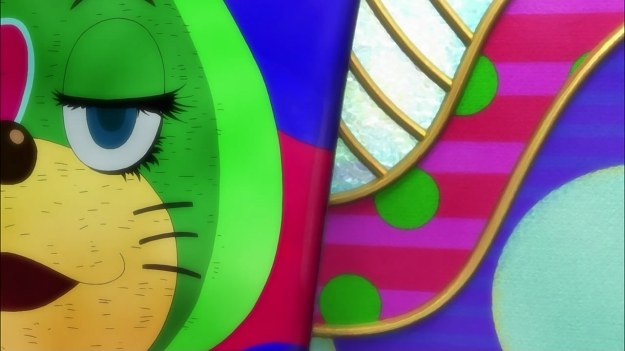 Which is a shame because Dr. Irabo is what keeps me coming back to the show. The premise of a crazy, 3-sided psychiatrist solving peoples’ problems was what attracted me to Trapeze in the first place, but Irabo’s importance to the plot is so limited that I constantly wonder if he will eventually be revealed to be a figment of the patients’ imaginations. His actions and appearance are ridiculous (even by the standards of Trapeze‘s polka-dotted world), but no one seems to question why he is three people, one of whom wears a giant foam rubber mascot head. He often shadows his patients around town, but seldom seems to interact with anyone else. I realize that the patient is supposed to be the focus of the episode, but I expected more of a House, M.D. kind of narrative where the interaction between doctor and patient would flow both ways. Irabo does sample his patients’ professional lives, deciding to try his hand at writing and baseball and falling into the trapeze net, but he always gets bored of them before the credits roll. He’s also still largely an unknown quality, we’ve had more personal moments with the stone-faced nurse than with him. 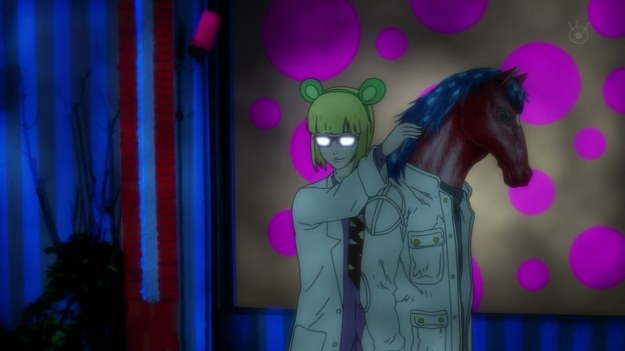 There have been a few more hints about the nature of his multiple personalities. In the latest episode the blond bespectaled aspect (shown above stroking the patient’s mane and at top grinning horribly) is pretty clearly cast as the darker side of Irabo; he advises the patient to abandon his teammate to a beating by yakuza thugs. And from the beginning the animal-headed side of Irabo has been the unrestrained, childlike aspect, too immature to hide his arousal at the nurse’s injections and prone to precociously stating hard truths. That leaves the small, quiet one, and the question of what role, if any, these divisions in Irabo serve thematically. Like the rest of the show, they have me worried about how silly I’ll feel about how much thought I put into them if they turn out to be meaningless and shallow. The clock is ticking for Trapeze to prove that it’s not just a one-trick pony dressed up as something more.