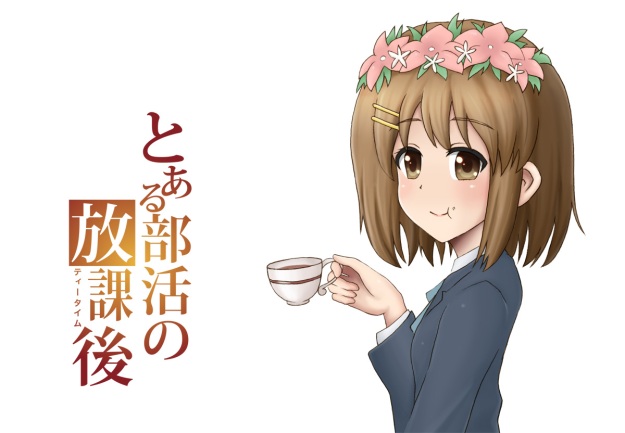 I’ve already made myself clear on how much To Aru Majutsu no Index‘s spinoff, To Aru Kagaku no Railgun sucks, and I stand by my initial impression. However at the time I suggested that the show was somehow not a worthy successor to Index, and I’d now like to recant that statement, because after careful review I’ve determined that they’re both really, really terrible.

I suppose if I had to decide which is the lesser of two evils I would pick Index, but that’s not to say that it isn’t gut-wrenchingly awful. After the first few episodes I would involuntarily flinch every time Touma opened his mouth. Half of the series’ running time must be him flapping his lips about friendship, which he defines as the relationship between a man and whatever half-baked moeblob he bumped into 5 minutes earlier. Touma is as impressionable as a newly-hatched chick; over the course of the show he risks near-certain death to save a young girl he met earlier in the day (several of these actually), a man who claims to be his father but is a complete stranger to him, a tsundere who he has every reason to believe hates him, a living puppet that he is explicitly told is only an extension of a higher consciousness and has no mind of its own, and an undying simulacrum of a human being who is some kind of manifestation of another dimension. All but the first on that list tell him outright not to interfere, but as a main character in a shounen story he gives no fuck and imposes his childish will on everyone around him.

Possibly the most embarrassing part of Index is the creepy way Touma has of accidentally stalking Misaka and completely dominating her with his presence. He just happens to have the ‘bad luck’ to run into her everywhere, and every time they meet she ends up completely losing her cool and being humiliated. I plan to talk about tsundere at length in the future and when I do Index will be exhibit A; it really showcases the coercive nature of tsundere relationships. More to the point, it just looks ridiculous. We’re constantly told that Misaka is insanely powerful, she even gets her own spin-off series, but she never actually gets anything accomplished because Touma always shows up and causes her to melt into a puddle of moe. 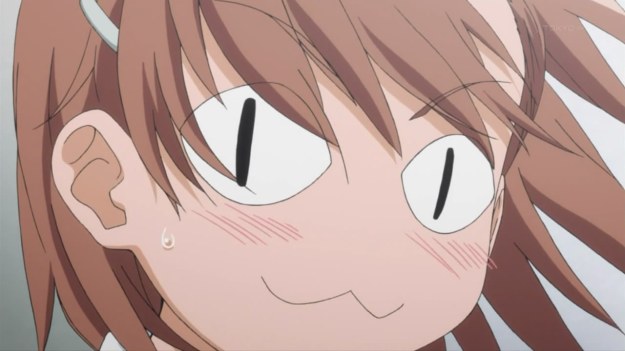 It might seem hard to actually go downhill from a start like that, but To Aru Kagaku no Railgun manages with ease. As the image at the top of this article suggests, Railgun is the retarded love child of Index and K-on!, a plotless mess of a show about four highschool girls who giggle and chatter and are as moe as they are incompetent (the title of the picture reads “A Certain Club’s Teatime” if you were wondering). By the end of the first episode of Index Touma had learned of a secret society of magicians and had picked a fight with a fire golem; by contrast we’re almost ten episodes into Railgun and all the main characters have done is arrest some petty criminals. Index was not without its filler, but in Railgun the plot, such as it is, rarely takes up more than a few minutes of the episode. When things do get “serious” they’re still a pale imitation of the events of the first season. The current ‘level-upper’ arc deals with the same theme as the Accelerator arc from the first series but instead of a dangerous lunatic the opponents are a bunch of hopped-up punks. The most dangerous challenge they’ve faced was protecting a child from an exploding teddy bear, and guess what: Misaka fumbled and had to be rescued by Touma.

In fact Railgun spends at least as much time tearing down Misaka’s character as Index did building up Touma’s. Scratch the surface of the first series’ main character and you find nothing; he’s as boring a lead as shounen has ever seen. Hell his special ability is to suck the fun out of everyone elses’ magical powers. He acts like a hero but he’s a shallow and one-dimensional character. Meanwhile in the second season Misaka is revealed to be all too human; I’ve lost count of how many times her underwear has come up in conversation. She’s riddled with insecurity and is repeatedly portrayed as having an immature streak, favoring childish pajamas and cartoon frog characters. I’ve already mentioned her pathetic little collapses around Touma, but seriously watch episode 4 of Railgun and see how she just keels over and blubbers when she can’t hurt the guy. Saten wonders when she meets Misaka if she’s really the titular Railgun, and I sympathize. For all the hype, Misaka is a pushover.

The To Aru series take a promising little scifi premise and shit all over it. For every neat little physics trick the shows offer there are 3 speeches about camaraderie, 2 pantyshots, and a pratfall with Index that ends in her biting Touma. Despite its technical quality (as I’ve said before, JC Staff can animate the shit out of a cartoon), the franchise is soulless and cheap; frankly if you’re tuning into Railgun every week in hopes of more wacky underwear antics you are what’s wrong with anime.

41 thoughts on “A Certain Shitty Anime”