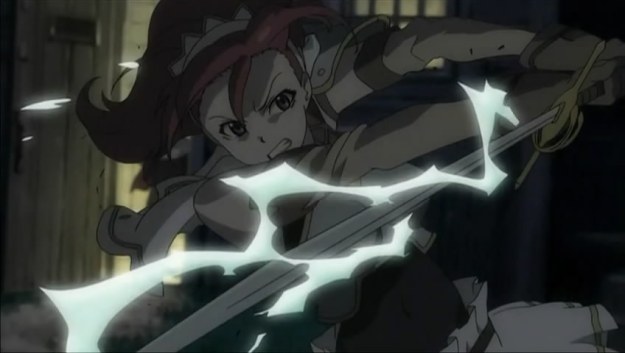 I guess the dude in black is a dark Pokemon: 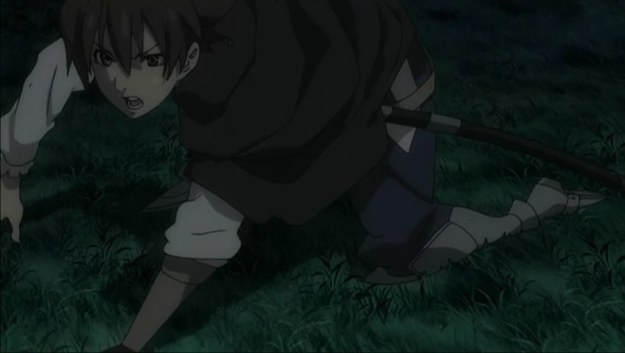 I know they want to add tension but…

…what the hell is Lisa hesitating for? What was she gonna do? Wear that ugly ass outfit from the fifth episode and blind all the fighters? 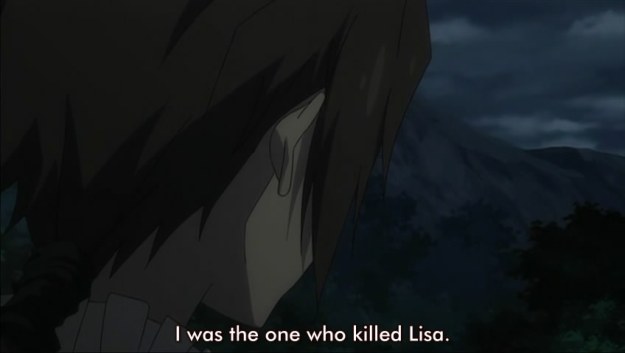 Whoa… the plot is finally moving. Here’s what I don’t get–if Valbanill is this evil and scary beast that only wants to destroy humanity, how did Luke and former Lisa just magically encounter it in the mountains? Lah dee dah, hey look a giant terrible beast! Did nobody ever bother to say, “Y’know, maybe we shouldn’t build our homes right next to the mountain where an evil creature lives?” Better yet, Valbanill lives in a volcano by a forest. Even assuming it’s reasonable to live next to a volcano, did nobody bother to tell the children? “I know you kids like to play with swords and go on adventures but…. yeah…. there’s a man-eating creature in the mountains. Hope that helps.”

By the way, the Wikipedia entry on The Sacred Blacksmith owns:

She loves luke very much but does not want to admit it to anyone when every Luke sees her naked breast or see her wearing clouth other than her armor she gets embarest and beats him up.

I bet Kurumi is a nice girl. I bet there is a lot more to her beyond rumors and speculations. Since she’s trying to “steal” Kazehaya away, however, people will focus only on how a confused girl poorly reacts to awkward high school relationships. In a way, it’s synecdoche, but I guess it’s necessary to villainize someone to garner ever more sympathy for the clumsy clod Sawako. 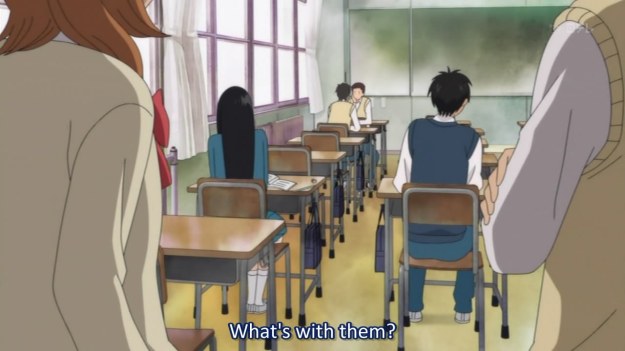 This is a world where people stutter with embarrassment whenever there’s a slightest bit of personal contact (the hands barely grazed… BARELY)… is this cute? I just find it a bit sad when we can’t even hug our friends without dying a little inside. I can only imagine Sawako undergoing a core meltdown on her honeymoon at this rate.

On another note, I’ve admired Production I.G’s animation before but not this:

Yarr, 'tis I, the one-eyed bishie.

So what did we learn from this episode? Well, that this is okay to show on broadcast television: 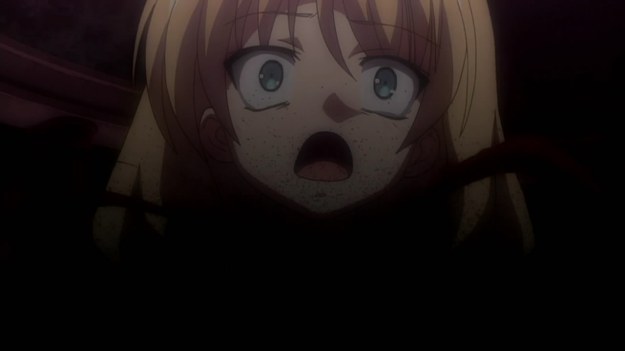 Whatever this is. Most of this episode felt like a dating sim. Kakeru just goes from one girl to the next, giving the right responses to maintain his course toward a harem ending.

I’m glad Yuka’s crazy ’cause she keeps this thing interesting, but man, the execution is all wrong. C’mon Yuka, did you think Misuzu was gonna take a giant gulp? At best, you’d only shave her lip. 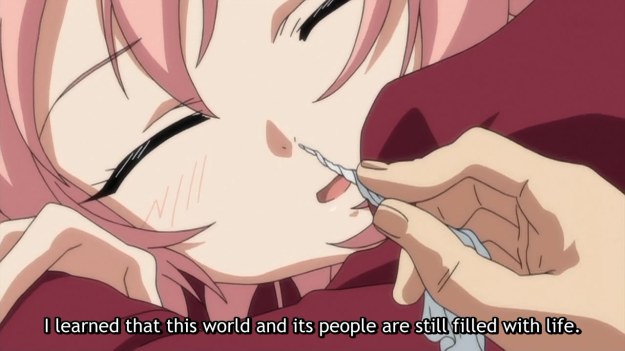 This whole monologue was one giant joke. Silver-haired loli (whatever her name is) claims to be pessimistic about the world due to starving African children, wars, etc., but then changes her mind because durr my classmates are cute and play pranks on each other. 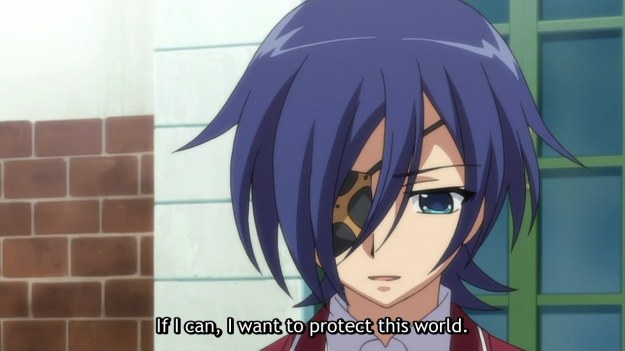 The ridiculousness of the entire thing hits its peak here. Noble things to say while a girl in her underwear is rubbing her body on you like a dog in heat.