Not a hot start for our, ahem, “hero.” Two years after being stood up on Christmas Eve, Junichi is still moping about it. Oh yeah, when I said “moping,” I actually meant “floating naked in a fetal position amidst the lonely stars of frigid space.” Sheesh.

What’s our jilted lover to do then? Well, being the helpful yet personality-less harem lead that he is, he gets to be called nice by Morishima-senpai no less than three times throughout the show. Of course, this leaves him awe-struck. 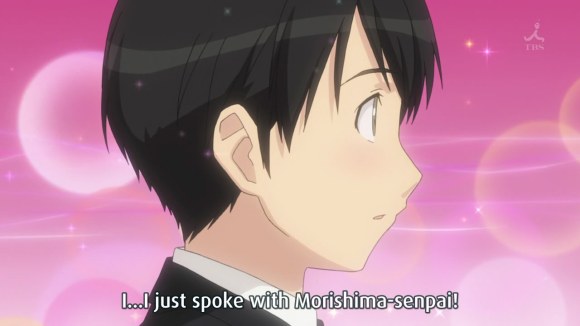 Lots of guys fall into similar traps: “OMG, she likes The Shins. I like The Shins! We’re totally soul mates.” For Junichi, he thinks helping a few girls out and having idle banter means he’s totally in love. This is why it was so delicious when he got rejected at the end the first episode.

Guys like him deserve to fall into a fetal position every night wondering why the girl said no. Unfortunately, he has only up to go from here as it isn’t likely that this show will have the guts to do otherwise.

– Oops, he’s not totally personality-less. My bad. He fantasizes about his sister taking a bath with his senpai. That makes him a creep at least.

– Junichi and his best bud ogle photoshoots of hot babes. Boys will be boys! On the other hand, what kind of photobooks do you think Morishima looks at? Cute doggies~!

What else would girls look at? Teenage girls are so innocent and chaste and would never have any urges whatso-

Once praised for their studiousness, Japan’s teenagers are gaining a less wholesome reputation, for promiscuity.

Anime is so unrealitic. Sometimes I even think it’s just fiction.

I always float nakedly in a fetal position in deep space when I get rejected.

When I get rejected, I hurtle through a space-time tunnel (naked, of course) like Dr. David Bowman, but instead colored lights all around me, the background is full of kawaii Japanese schoolgirl pointing and jeering.

I can’t see anything the least bit likable about Morishima. She’s the school idol, but from what I can see, the only thing she has going for her are her looks. Who’s more shallow, the legions that idolize her or her for using her looks and desirability to gain status and making book carriers out of unwitting wet blankets like Junichi (oh God, why do generic ren’ai game adaptations keep using this name for their male leads?).

Well, judging by the cover of the game, I’m guessing that Morishima’s (I keep typing Hiroshima, how unfortunate) not supposed to be the first love interest (although I read that the anime is going omnibus style so she will be eventually). So you’re not supposed to like her yet. Junichi’s failure here is to be contrasted with his triumph later, presumably with Ayatsuji (I think that’s the girl in the window). Wiki says she’s manipulative and cunning though so oooh, that sounds exciting. /sarcasm

Anyway, I could be wrong and thus they could be going with Morishima first. In that case, I dunno why she’s so unlikeable to start.

Speaking of the Wiki, Rihoko is supposed to have a large appetite but all they did was give her a baggy sweater for her design, LOL.

So, what’s the conclusion? Is it or is it not worth watching?

Looking at the first image made me go ‘sheesh’ and seriously doubt my will to check it out.

I feel bad for the White Knight. I bet his mind is already in the nakid space continuum.

Btw. Thanks god that all the K-On! characters fill in the bigger half. Uh.. cause they do, right?

So, what’s the conclusion? Is it or is it not worth watching?

It seemed pretty generic, but I’ll probably sit through at least a girl’s story before I drop it.

Thanks god that all the K-On! characters fill in the bigger half. Uh.. cause they do, right?

Let’s say half of the group is promiscuous. Oh dear, which one?! Before anyone delivers a treatise on the subject, (or God forbid, a doujin), I’ll just say Tsumugi would be a cop-out answer. Too easy.