Repetition isn’t always bad. You know what’s repetitive? Comfort food. Comfort food is a trip down memory lane. We don’t want our comfort food to be wacky and different. When we dig into that plate of spaghetti and meatballs (substitute in whatever works for you — for me, it’s spaghetti), we want it to evoke childhood memories of, well, itself. 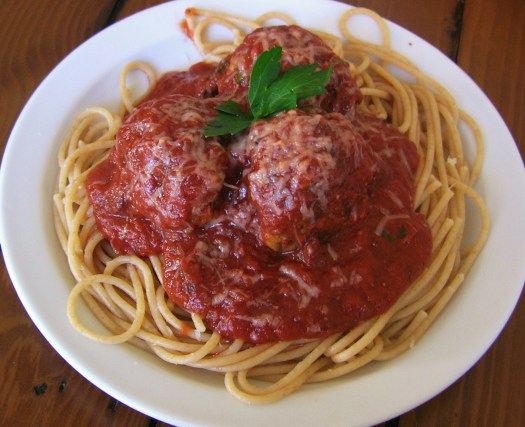 I dunno how comfort food does it for everyone — maybe it brings some people back to safer, happier times. It’s not quite so dramatic for me. All I know is that comfort food is comforting (tautologies own) in all its stark familiarity, its frank repetitiveness, its bewitching nostalgia. Why ruin a good thing and try to reinvent the wheel?

Well, what does repetition do for anime? Is there such a thing as comfort anime? When we trample upon oft-trodden grounds, does any of it bring us back to better, simpler times? 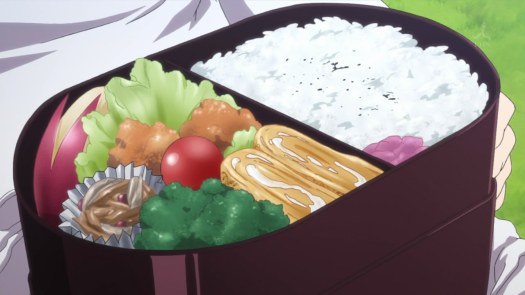 In enters the obligatory lunchtime scene in which all of the fairer sex get to fight for the approval of the pathetic male. They hurdle over each other to feed him meals they so faithfully and dutifully slaved over. The tsunderekko playfully resists, 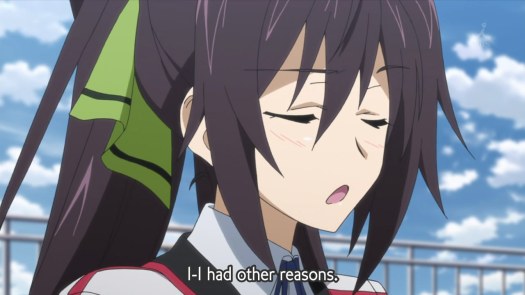 but her intentions are all too familiar as she death-stares the main character gulping down a chunky brown anime thing. 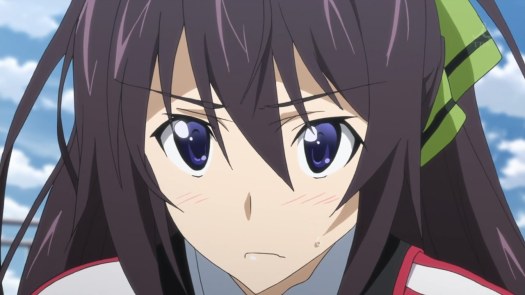 In this scene, and all other scenes like it, what do girls like Houki get out of wasting their precious time and their (parent’s) hard-earned money? A single utterance of “Umai~!” from the dickwad who probably came to the meal empty-handed, ready to be gorged and fed like some soulless cow. More importantly, what do we get out of these scenes? Why must they be included?

There are a myriad of fight scenes in Infinite Stratos full of flashy lights, haughty posturing (OMOSHIROI), incomprehensible moves invented out of nowhere, so on and so forth.

Come at me bro~

It’s a simple dance long perfected by DBZ. The “good guys” play a high risk game, putting forth all their effort. Alas! Have we subdued the “bad guys?”

(They’re all classmates so what difference does it make?)

The billowing column of smoke clears. 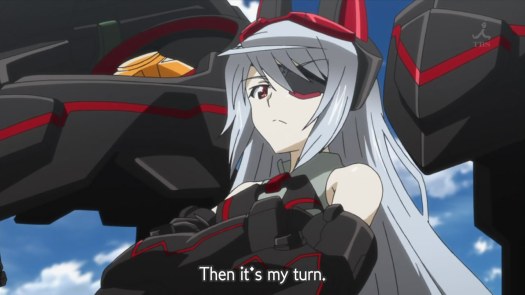 Other fight scenes are followed by static scenes of higher ups spewing forth a verbal broth of blandness in the most monotone voice possible.

I’m so… so… hot and bothered. Reusing the same background and frames for these scenes help to conserve money for the exciting battles, after all!

At the end of the day, comfort food tastes good. It might not be new and exciting, but it’s delicious. As such, it doesn’t have to re-invent the wheel. Does Infinite Stratos evoke anything special in its flagellation of the undying anime tropes? Do we squee with delight every time the main character is being treated to three different bento boxes? Are we dangling precariously off the edge of our chairs when every special move and strategy is painstakingly hammered out in words following the very fight scene we just watched? The show’s iteration of the childhood friend being two childhood friends instead of one (and even ranking them) is like some corporate chain restaurant bragging about breading their mac ‘n cheese with panko bread crumbs and patting themselves on the back for this revolutionary twist.

Other bits and pieces:

We have a bit of a multicultural theme going on: each girl pining for Ichika comes from a different country. It’s like Strike Witches x Hetalia but uglier and dumber somehow.

I think the Japanese girl is Houka? Check out her tsundere demeanor juxtaposed against the soft, floral Nipponese patterns. If you think she’s a grumpy sourpuss, LOOK CLOSER LENNY:

Camera swerves in close and her expression goes from mouth agape to hands-crossed, deredere sensibilities. “If… i-if you had only taken the time to gaze deep into my frivolous soul… you’d see what a vulnerable, delicate flower I really was~” 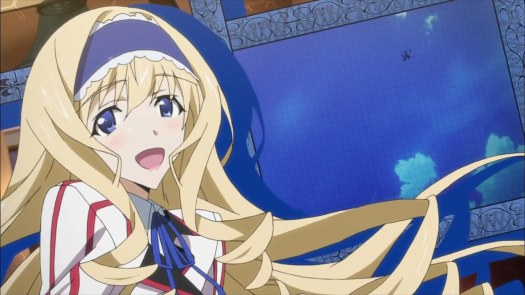 Brit girl gets this simple yet elegant pattern cause she’s Brit, man. They’re like classy and shit. Teas and crumpets?!

Chinese girl gets dragons ’cause she’s Chinese. Dual dragon racing strips down the side of her car and everything. And I love her theme song. It’s this stereotypically Chinese sounding thing that sounds like someone plucking cats. It stops here, unfortunately. Frenchie gets her own theme song too and is added to the ED along with everyone else but she doesn’t get fancy frames in the OP.