Hm, earlier this week, rain forced Okabe and Kurisu to close the distance between them, leading to confessions of love. In Usagi Drop, it is, again, a catalyst in bringing people together. Hell, a storm got Shion and Nezumi to meet in No.6 too. There’s just something romantic about rain, isn’t there?

Did we see potential lovers come together in Usagi Drop this week? While I am crossing my fingers for Daikichi and Yukari, who knows how the anime adaptation will play out. At the very least, however, Daikichi got a chance to feel what it would be like to have a family. The same could be said for Rin too, who doesn’t seem to skip a beat around a maternal role model like Yukari.

Everyone just seems so pleased with this arrangement that one must naturally wonder, then, why not make it a reality? This is where you value a child’s frankness: Rin outright suggests that Yukari and Kouki stay over for the night. Unfortunately, thoughts of impropriety probably prevents the adults from taking the step their hearts are yearning for desperately. You can see it in Daikichi’s eyes whenever he gazes at Yukari. Too bad he’s a little too shy on the romantic front to do anything about it.

Kouki, the jester
I like Kouki. I really do. He’s so full of energy and life, but most importantly, he feels like a kid. He’s running, jumping — he has the missing jouissance that Rin lacks. Rin sits quietly by Daikichi and brushes her teeth while Kouki’s running around the house screaming about poop — you gotta love that. But Rin’s reaction? “Jeez.” I’m not saying she’s not a happy child, but she just seems so uptight. 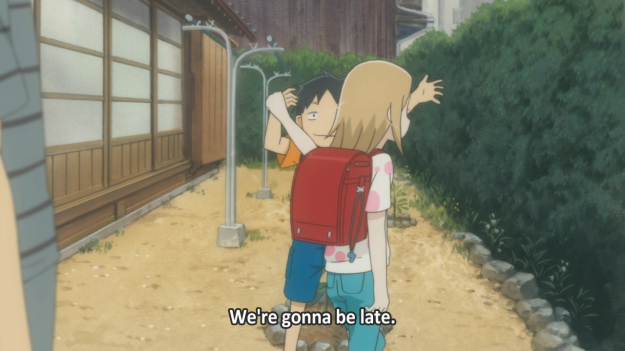 Sometimes, Usagi Drop can feel a little too serious — a little too stuffy. Ah, here’s the perfect father-daughter pair! Bask in the warmth of parenting! It’s like, c’mon, loosen up a little. Bring a ruler for the big turd I just made in the toilet! Is Kouki immature? Of course he is, but he adds a bit of the carnivalesque to the show. Kouki’s the jester; he brings the sunshine to an anime that can be a little cloying at times.

It’s just a little sad when nature is knocking right on everyone’s door, but all the teachers and Rin can do is stick to protocol. Blah blah, your morning glory looks so pretty. Why don’t you sketch it! Yawn. 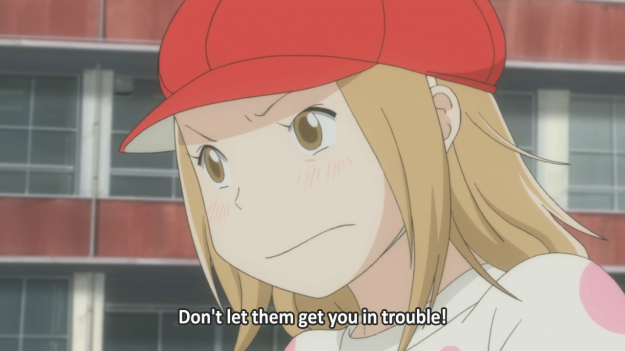 I dunno, there’s just something a little depressing about this scene. Maybe it’s because I grew up in southern California so I would have killed as a kid to experience a rainstorm. Maybe I just don’t think kids this young should worry so much about drawing time and whatnot. They’re at an age when the world seems most lively. Why hold their fun back? It’s only on the way home that Rin finally joins Kouki in screwing around like little kids should. 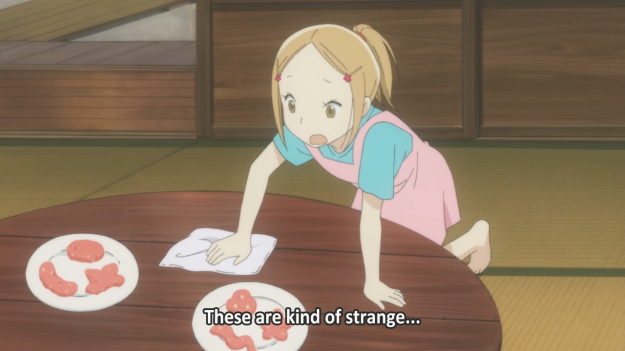 What’s wrong with a little strangeness?

Life insurance
I guess with parenting, the thought of mortality also enters the picture. It’s rare for people without kids to start thinking about life insurance, but when you have someone else depending on you, you start to wonder, “Gosh, what are they gonna do if something happens to me?” These thoughts play out in Daikichi’s head amidst an impending typhoon. The anime barely lingers on the topic, however, so we’re not sure if Daikichi will follow suit and get the various insurances for himself and Rin’s sake.

“…bitching and moaning…”
Daikichi muses that other dads are always complaining about their lives even though they seem perfectly content. Isn’t that just the easiest way to relate to other people though? Maybe I’ve been hanging around the wrong crowd, but most people usually don’t get together to wax poetically about their awesome lives. We connect to each other more easily through a jovial deconstruction of our issues.

This jocularity about the downsides of life just seems to diffuse the seriousness of our actual problems. After all, if you’re saying to yourself, “What am I working for?” you’ll come across a little bitter. But if you’re just relaxing with some friends during a break, and you’re saying, “Ah man, I don’t know what I’m working for!” with a smile, the problem doesn’t really seem real anymore. It’s just rhetorical.

Everything else
• I wish they taught us how to draw kanji like this when I tried to learn it. The circles seem like they would really help:

Instead, it was “Here’s some paper, now try to mimic me–… no, you’re not mimicking well enough!”

• There’s educational insurance? What on earth are we insuring against?

• Man, what a dad: “Even though I kinda doubt he’ll be college material, being my kid…”

• Aha, even contract employers get a welfare pension program and health insurance in Japan. Sometimes, I don’t know what my own country’s trying to accomplish in screwing over its workers.

• There’s just something about the way Rin suddenly sticks herself into this scene that makes me laugh. 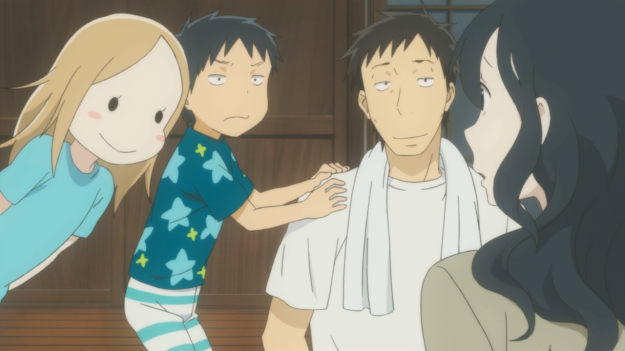