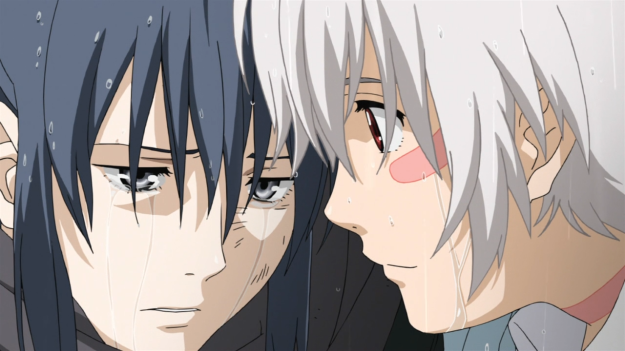 There have been some complaints by other bloggers that it’s hard to understand why the characters of this anime do the things that they do. At the heart of the matter is Nezumi’s intentions. What exactly is he after? I guess I haven’t addressed this particular issue in any of my write-ups for No.6 because I’ve never really seen the problems that others were talking about. In any case, I think this episode pretty much explicitly lays Nezumi’s soul bare for all of us to see.

To understand Nezumi and his affinity for Shion, we must go back to the very first episode of the series. Here, we see a young boy being pursued by authority. Wounded and with nowhere to turn, he suddenly hears a cry of desperation in the raging storm — Shion’s cry. With no expectations, Nezumi takes a chance and sneaks into Shion’s room. He was prepared to take Shion’s life if necessary. The rest, as we know, is history.

One has to understand that Nezumi lives in a dog-eat-dog (figuratively since the dogs in the anime are actually quite nice) world where survival is the utmost concern. This isn’t exactly a secret either; the anime hasn’t been coy at all about this particular subject. Characters like Rikiga are even willing to exploit others for his own personal gain. But all of a sudden, Nezumi meets another boy who isn’t wholly self-interested. For the first time, Nezumi encounters someone who has the ability to actually care for another living being, be it a human or not.

And like any person who encounters something rare — imagine it as if he had stumbled upon a mysterious artifact — Nezumi suddenly gets the urge to protect Shion. I know this might seem silly to us. After all, if we meet a nice person, we don’t exactly think we should smother the hell out of them. But in the world of No.6, Shion is an anomaly. In a world where exploitation materializes as parasitic bees of biblical proportions, Shion is valuable. It’s not just Nezumi who thinks his friend is strange and different. In Rikiga’s own words, the former No.6 inhabitant is an angel.

We can see, then, why Nezumi rescued Shion from No.6. This is also why Nezumi goes to such great lengths to protect Shion from the horrors of reality. At times, Nezumi’s over-protectiveness can even appear paternalistic. Throughout this week’s episode, Nezumi nervously observes his friend as they attempt to rescue Safu. All of a sudden, Shion is acting rather different to say the least. He suddenly takes charge, is full of confidence, and, as Nezumi watches in horror, Shion murders a No.6 soldier mercilessly. Nezumi thus fears that his worst nightmares might’ve come true: this wonderful angel — this Happy Prince — that Nezumi had sought so hard to protect is being tarnished by cruel, brutal reality.

Of course, Shion snaps out of his strange behavior and everything seems to be okay for the time being… but why did Shion change to begin with? Hm.

What changed?
There are three main possibilities that come to mind. First, we have to consider the theory most likely in Nezumi’s head: it is all his fault. Throughout the series, Nezumi has been derisive whenever Shion spouts one of his naive, let’s-save-the-world ideas. The former has constantly instilled in the latter the idea that the world is black and white and that survival is all that matters. While Shion may have had his doubts with Nezumi’s self-interested philosophy, over time, it isn’t hard to imagine that Shion may have adopted Nezumi’s way of thinking.

But did Shion really murder the soldier at the end of the episode? On the surface, yes, but it is quite apparent that there is something off about Shion’s eyes in this particular scene. In anime, where eyes are often the emphasis of a character’s face, Shion’s eyes might very well be the key to understanding his change of character. When Shion suddenly snaps out of his strange behavior, his pupils visibly change before us. In other words, was Shion possessed?

Let’s first consider whether or not Shion was self-possessed. Shion going into rage isn’t without precedent: when Rikiga insulted Nezumi in the fourth (I think) episode of the series, Shion flew into a rage. In this episode, Nezumi has been shot twice and the No.6 soldier is moments away from killing Nezumi. It isn’t hard to imagine, then, that Shion may have snapped in this particular moment in order to “avenge” Nezumi. 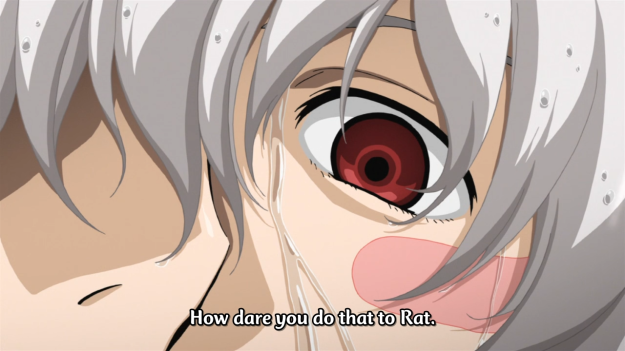 There is, however, quite a noticeable difference between how Shion flew into a rage with Rikiga early in the series and how he acts at the end of this penultimate episode. Shion calmly takes down the soldier with a single shot from a distance even though one can presume that this naive character has never handled any sort of firearms before. Furthermore, Shion casually strolls up to the wounded soldier and executes him. This is a far cry from any murder of passion. In other words, is it possible that Shion might have been possessed by a heartless monster?

Throughout the episode, Safu’s voice has been guiding her saviors, especially Shion, to her rescue. The way the episode ends, with Safu standing all by her lonesome in a laboratory only to turn and smile strangely at our heroes, certainly suggests an omen of grave portent for things to come. Essentially, is Elyurias as benevolent as she had previously been portrayed? Is Elyurias pulling Safu’s strings, who, in turn, is pulling Shion’s strings?

The mass grave
The imagery near the start of the anime is striking. After Shion and Nezumi are dumped into the correctional facility, they land atop thousands upon thousands of dead human bodies. One even questions No.6’s purpose in capturing the city’s outsiders only to leave their prisoners stranded in a sea of rotting corpses. I won’t, however, spend any of my time trying to decode the city’s bizarre intentions. 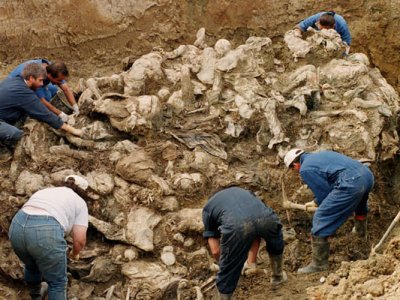 Instead, I am interested in Shion’s escape from “hell.” The mass grave instantly recalls to mind the horrible photographs to emerge from numerous historical conflicts. I immediately thought of the Bosnian War of the late 90s, but honestly, similar imagery unfortunately accompanies any act of genocide. I also thought of the shocking final episodes to Berserk. There, we saw poor ol’ Guts climb a wall of skulls in a hellish landscape. I struggled, however, to find any thematic parallels between Berserk and No.6.

We can, of course, just analyze the scene on its own. In any culture, even though the deceased is devoid of any signs of life, we nevertheless treat a person’s body with respect and honor. There is, however, no dignity in a mass grave. In order for Shion to save Safu, he must literally step upon countless bodies. Essentially, he has to desecrate the deceased in order to fulfill his goals. And this is a very important development because Shion has always been sort of a saint in the story. 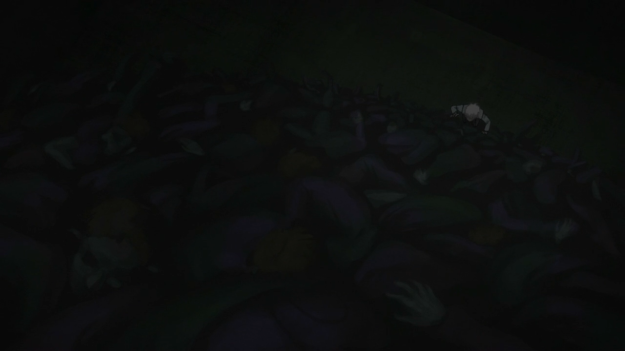 At this very moment, however, Shion is preoccupied with only a single goal: save Safu. And while this goal appears selfless, it isn’t wholly so. Shion’s willingness to disrespect the dead, even if there was really nothing he could do about it, illustrates how one will inevitably dirty oneself in order to get ahead in life. Even if some malevolent spirit ends up being the reason for Shion’s bizarre behavior in this week’s episode, the image of Shion climbing a wall of corpses serves as an ironic metaphor: as he literally ascends upon the deceased, his character necessarily descends.

Everything else
• Operation: Save Safu creates an unlikely duo in Dogkeeper and Rikiga. As I watch Rikiga go along with Nezumi’s plans, however, I’m starting to wonder if the guy isn’t actually as bad as I had previously thought. He’ll always be the guy who exploits young women for his own profit, but maybe Rikiga won’t backstab our heroes after all.

• Dogkeeper claims that she has no clue what to do with a baby, but when she has the child in her arms, the kid immediately stops crying. Eh, I’m not a fan of how this all unfolded. 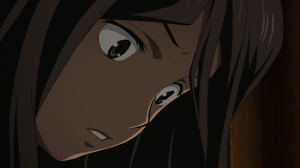 It’s a minor scene that doesn’t really affect the anime’s story one way or another, but I feel as though it reinforces a couple gender stereotypes without really addressing any of the deeper implications. Of course, with so little time left, the anime has better things to worry about, but in that case, why even bother to include the scene at all?

• The animation quality took a major drop at times throughout the episode, especially during the struggle at the end.

I wonder if the team working on this anime just isn’t particularly well-versed with action scenes.

• Other than the horrific mass grave at the start of the episode, the interior of the correctional facility didn’t really meet my expectations. I was expecting some gruesome human experimentation or something similar. But like Deadman Wonderland, all we saw were stark, cold corridors filled with nothing. Plus, Nezumi previously claimed that taking down the correctional facility would also undo No.6. We saw nothing to really lend credence to this idea, but I suppose we do have an episode left for the anime to address this particular issue.

• The little girl stares at the large honeycomb structure and fear suddenly overtakes her. As always, children in anime always seem to have extrasensory perception. 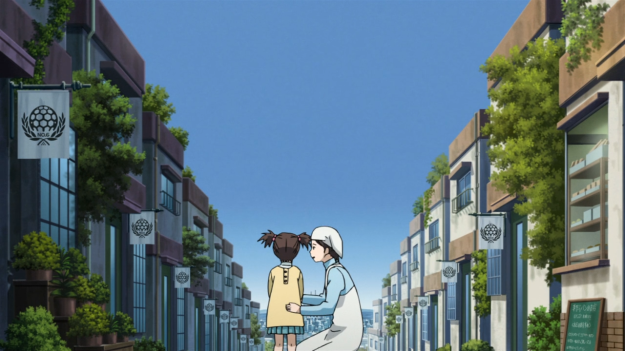 With Rikiga possibly being a good guy, however, I’m going to put my money on Elyurias. Although I’m sure it’s very unlikely that the goddess is actually evil, I think this sudden twist would somewhat redeem the anime’s late turn to mysticism. Something does bother me about the screenshot above though: the absolute uniformity of every single building except for Karan’s bakery (the window’s slightly different). While No.6 enforcing conformity isn’t a stretch, it’s hard not to think the animators are just being lazy here.