But seriously, I’m not going to approach this week’s episode of Blood-C with my usual attitude of incredulity, i.e. “Why is this so bad?” Instead, let me lay down some real talk (I’ve been listening to too much radio) and explain what I find to be Blood-C‘s biggest failure. No, it won’t be about how boring the anime is or how slow the anime is. There are plenty of slow films and series out there that are nevertheless masterpieces. To simply call Blood-C boring doesn’t get us anywhere either. Why do we find it so boring?

A story’s point of reference
In almost all of these strange and crazy stories, there’s always one guy or gal who is willing to question the fantastic. Take Han Solo, for example. He’s the everyday man trying to make a buck in the galaxy. We can identify with that. And when Obi-wan Kenobi starts talking about the Force and all this hocus pocus, Han Solo is like, “C’mon, man, I’ve been all across the universe and I’ve never ever seen anything like the Force. All I need is my trusty blaster.” He’s the character that counterbalances the fantasy in the original Star Wars movies. Sometimes, if a character takes a step back and questions the reality of which he or she exists in, the audience doesn’t feel so lost and disconnected from the story. If you’ve seen the Star Wars prequels, try to identify the analogous character to Han Solo. You’re not going to find one and that is why those movies (among other reasons) are horrible.

Now in anime, the medium reflects a different culture but the general idea is the same. In Mawaru Penguindrum, we have Himari who is completely oblivious to what’s going on around her. We have Ringo who is obviously insane. As for Kanba, he’s not hesitant to break the law, delve into the underbelly of society to procure some money, etc. He’s not really one of us. He’s someone we might want to be, but suppose we are in the characters’ shoes, who would most of us be? Our Han Solo character — believe or not — is Shouma. We may think he’s a little wimpy and uncool compared to Kanba, but Shouma is the character in Mawaru Penguindrum that most reflects the show’s audience. When we’re thinking, “Aw hell, Ringo, don’t rape your sensei,” Shouma goes and stops the crazy girl from carrying out her plans. When Kanba is like, “Yeah, let’s just break and enter someone else’s home,” Shouma, i.e. the audience, is the one who has qualms about transgressing society’s rules. 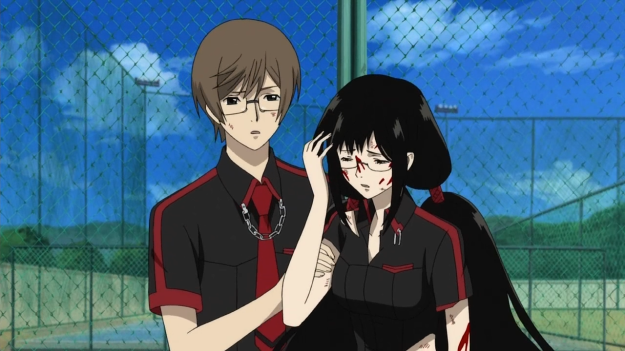 Now, I’m not saying that all of us are Shouma or want to be like Shouma. I’m not saying that most of us even respects the guy. But he’s clearly the most realistic character in an anime where crazy stuff happens all the time. And how many of us are space-faring smugglers like Han Solo? But he’s also the most “real” of the Star Wars characters. Now, here’s the problem: who is that character in Blood-C? Who sits back and asks, “What the hell is going on?” It can’t be Saya; she’s the clueless shrine maiden who fights the Elder Bairns. It can’t be any of her classmates since they’ve all been slaughtered like pigs. The dog? He’s from another damn dimension for Christ’s sake! Tokizane? He would be the most likely candidate, but he’s rarely ever onscreen.

Where is Blood-C‘s Han Solo?
As a result, there’s no one in Blood-C to serve as an intermediary between the audience and the fantasy onscreen. There’s no one who embodies the audience’s curiosity for answers.

No one asks any of these questions in the anime. Tokizane questions Saya a few times, but he’s been in less than half of the series’ current episodes. Anyone else? Maybe Saya, but now you have a single character attempting to fulfill two conflicting roles. She’s supposed to be clueless and yet simultaneously curious. She’s supposed to be an innocent-minded, demon-slaying shrine maiden and yet a real character all at the same time. As a result, Saya doesn’t often ask the questions that we, the audience, are asking. And when she does get around to asking those questions, she is often very late in doing so. For instance, we asked last week, “Why is the school so empty? Why is only Saya’s class in session?” By the time Saya catches up to the audience’s thought process, an entire week will have passed. Now, if Saya’s thought process doesn’t align with how the audience is thinking once or twice, it’s no big deal, but this has regularly occurred since the anime started.

So there exists this disconnect — this gulf — between the story’s characters and the audience. For some people, they can get beyond this chasm and enjoy the anime anyway. I can’t and I suspect there are a lot of people who are in my boat. The biggest gulf, of course, is that the audience has known that something was off about Saya, the village — everything — for weeks now and we are only now nearing some answers. If people don’t find this to be frustrating, they are very, very patient.

Everything else
• When the dog starts questioning Saya’s identity and such, the anime cuts to an empty glass that had previously been filled with guimauve.

You just start to wonder how short this anime could be if Saya didn’t eat whatever people handed her.

• Someone smeared Vaseline on my screen: 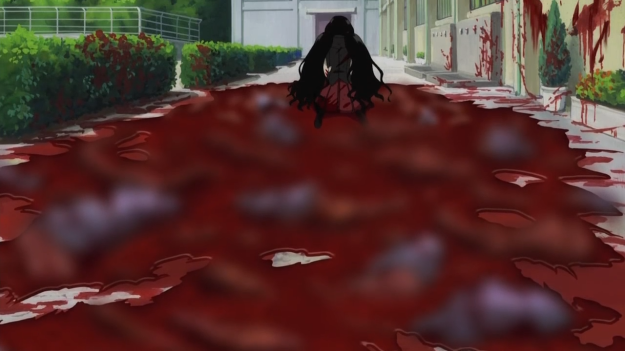 Either that or Production I.G. is rendering this anime on the Nintendo 64.

• The rule of the game is fight or flight. I can’t understand why everyone tried to run away from the danger one-by-one instead of all trying to scatter at once. Oh wait, yeah I do. Gotta make it easy for the monster to kill them. Still, it just feels so dumb.

• I don’t understand how Saya’s weapon can strike this episode’s Elder Bairn and constantly make metallic sounds, but blood nevertheless sprays indiscriminately from the monster. It really does sound like someone’s banging on pots and pans.

Then when Saya gets mad, all of a sudden, her blade can cut through the monster like butter. Does her weapon’s sharpness depend on Saya’s mood or something?

• When the Elder Bairns do talk, I really wish it was in an indiscernible language and the anime would give us subtitles or something. Something just takes away from the tension of a fight scene when a toy-like monster starts talking in a human voice.

• The Elder Bairn seemed to wonder why Saya would actually be mad about her classmates dying.

Are her classmates not human either? Are they evil? Should Saya hate them?