Kaoru likes Ritsuko, but Ritsuko likes Sentaro, who likes Yurika, but it seems like she’s only interested in Brother Jun. Oh boy. I hate love polygons. I really hate the way no one talks. Characters will just stew with their feelings. They stew until things boil over and friendships are destroyed (or irrevocably altered). Meanwhile, the audience can only sit there and smack themselves in the head.

This ain’t a review; I’ve never ever claimed to be a critic. I just blog my thoughts so it’s really irrelevant to me how realistic the characters are acting. I totally get that teenagers are dumb. It’s hard, however, to watch characters–characters you thought you liked–anguish over nonsense because they can’t just communicate their feelings. I just hate love polygons. Sure, it adds depth to the character relationships, but this is not the depth I’m looking for.

But I guess I have to take my hat off to Kaoru. He’s the only character mentioned above to actually put his feelings out there in the open by confessing to Ritsuko. Maybe Brother Jun’s too cool for school and he’ll sweep Yurika off her feet in later episodes, but for the time being, only Kaoru has said anything about his feelings to the person he likes. He even planted one on Ritsuko’s mouth… only to have her run away in tears (kids, man…). Everyone else devolved into the same blushing, wimpering mass that you almost forget that they were distinct characters with distinct personalities.

It’s weird to say, but everyone else should be more like Kaoru in this case. Put your cards all out on the table and let the chips fall what they may. And if you lose, well shit, it’s just a high school crush.

My tone is getting a little too harsh for a show I still (for the most part) enjoy, so enough about the love affairs of teenagers. My main reason for watching this show is to see how jazz is weaved into the story. Even so, the most interesting bit of development in the past two episode was the revelation that Sentaro is half-American, half-Japanese. Sakamichi no Apollon‘s pretty mixed in its own ways as well.

The characters have a keen interest in jazz, a genre of music that was unfortunately labeled “coon music” by a racist American in a bar. You can find the ever-looming presence of Christianity and salvation in every episode, but Christianity isn’t treated as some fetish of sexy nuns and dueling exorcists. Sakamichi no Apollon tries to explore these foreign concepts as much as Kaoru’s tries to figure Sentaro out. At first, Sentaro looks like any other meathead school bully, i.e. harsh sounding–discordant. But like jazz, once Kaoru got to know Sentaro, he finds a friend that is both an eclectic mix of thoughtfulness and spontaneity.

And both guys come from troubled childhoods. Both guys had difficulty making friends. Both guys were abandoned by their fathers. So is this the reason that Sentaro has turned the “father which art in heaven?” Will Kaoru find salvation in the same embrace of the Lord? I’m not a Christian (or remotely religious), but sin and redemption fascinate me. The last time I wrote about Sakamichi no Apollon, I hinted that I would compare the anime to Haibane Renmei. Unfortunately, it’s still a bit too early for that, I think, but I do want to make a quick observation on Sentaro’s behavior. 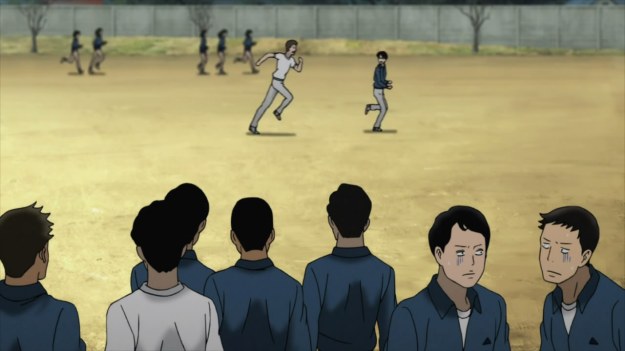 Other than his friends, everyone at school thinks that Sentaro’s a hoodlum. Guys who have never even met Sentaro will cower due to his (undeserved or not) reputation alone (see: the end of the second episode). We know that Sentaro fought a lot as a kid, but you don’t earn such a reputation from such a young age. Sentaro likely fought and fought up until recently to maintain the nasty rumors people say about him. Something then changed and he’s stopped ever since. I’m very interested in finding out what changed, but for the time being, it’s also fascinating to see how Sentaro never ever engages in other people’s discussion of him.

People will bring up the fact that Sentaro’s scary, but he ignores it. He doesn’t even address it. He’ll still fight if he needs to defend his friends, but Sentaro’s usually all smiles nowadays. And, at first glance, we might be quick to say that Sentaro’s just running from his past, but this is where I wanted to draw a connection to Haibane Renmei. There are two sides to every person: one’s facticity and one’s transcendent self. In other words, your history and your free will, respectively. The problem with redemption is how the former often tarnishes the latter. Take Sentaro, for instance: he used to get into fights (or possibly worse), but we see him now as a totally great guy. Still, others, i.e. his classmates, can’t help but see the thug who used to beat them up. Can you ever attain redemption if others won’t allow you to escape your past?

In Haibane Renmei, everyone loses their memory of their past self when they enter the world of Glie. Why? Imagine yourself as the sinner who is now totally repentant. Are you a good person? Now, imagine that you are in Glie and ask yourself the same question. Essentially, Glie allows its inhabitants to free themselves from the trappings of their facticity. A person doesn’t have to worry about his or her past deeds; he or she can just start being a good person and living a good life.

In a way, therefore, you could say that Sentaro is forcibly ignoring his past so that he can just start being a good person. When others say bad things about him, he doesn’t engage them. But look at it in a different way. Sure, there are no mystical powers at work to induce amnesia on Sentaro, but look inward: aren’t we like the inhabitants of Glie. When we first met the guy in the very first episode, we knew nothing of him. We only saw his free spirit, his willingness to befriend Kaoru, etc. So when others say negative things about Sentaro, it’s not that we don’t believe it, but we are quick to affirm Sentaro’s transcendent self, i.e. “Yeah, but he’s a good guy now–he wouldn’t hurt anyone without reason.” It’s as though this is the best way to get the audience past its preconceptions of people like Sentaro, i.e. people who are of mixed blood, people who are physically unlike one of us, people who might not share our religion. etc.

Anyway, I’ve rambled on long enough. Sorry for the lengthy hiatus. Hopefully, I can get back to updating at a steady pace.