Kokoro Connect feels like an eternally unfulfilled promise that something interesting will happen, and it’ll throw the occasional bone to keep me patiently watching, but nothing ever does. Everything is there to make a fantastic anime except for the anime itself. To be fair, the show is competent, but that’s exactly the problem. It’s just a competent, relatively light-hearted story. Yeah, the girls have problems to deal with, but they’re your run-of-the-mill teenage issues. As I’m watching the show, I can’t help but imagine a superior anime in my head.

Inaba confides in Taichi that she has trust issues. When combined with the body-swapping predicament, you can imagine why she might worry herself to exhaustion. After all, what if one of Inaba’s friends commits a crime while he or she is in her body? Unfortunately, this is where the buck stops; Kokoro Connect seemingly refuses to tackle its premise head-on, opting instead for light-hearted but equally mundane resolutions. As a result, the show feels as though it falls just short of some grand epiphany. 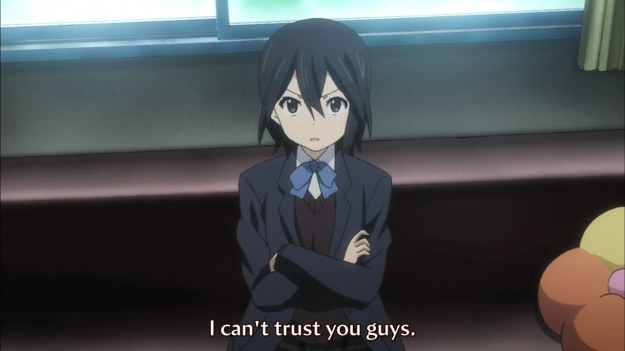 Four or five times a week, I stream anime to my friends. Before I write a post about any of the shows I’ve seen, I will usually bounce my ideas off of them. For bad shows, like the Harem Hill contestants, we usually just shoot the shit, but that’s besides the point. Anyway, when Inaba was confessing to Taichi about her problem, my friends and I had the following conversation:

Enemaduck: This is retarded.
Fin: Yeah, this is really dumb.
Me: Well, If you switched bodies [with a guy], and [he] took advantage of that, you’d be pretty paranoid!
Enemaduck: If I switched bodies and masturbated, did I commit rape?
Me: Maybe.
Fin: Ya, that’s a solid maybe.
Enemaduck: What if I only watched while someone else did it for me?
Me: What does that even mean?
Fin: Well, wouldn’t it be the same as having sex with someone while they were asleep? That’s rape, so body swap masturbation would be too, I think?
Me: It depends on what you think constitutes personal identity.
Enemaduck: Well, if the 2nd party does not know it happened, is it even a crime?
Me: Sure it is.
Fin: That’s a zen riddle.
Me: That’s like saying if you get away with rape, it’s not rape.

Before the discussion could continue, Taichi tells Inaba a very personal secret, and this somehow touches her deeply. She eventually has a talk with the rest of the gang, and everyone’s all smiles and sunshine by the end of the episode. Basically, all of our talk was for naught. The anime stops just short of exploring the limits of its premise. Does it necessarily need to broach the issue of body identity vis-a-vis body-swapping? No, but that’s just one example. My point is simply that the anime could’ve done more. Instead, Inaba’s problem is just her inability to trust her friends, and the problem is either resolved or put on the backburner as quickly as it was introduced. 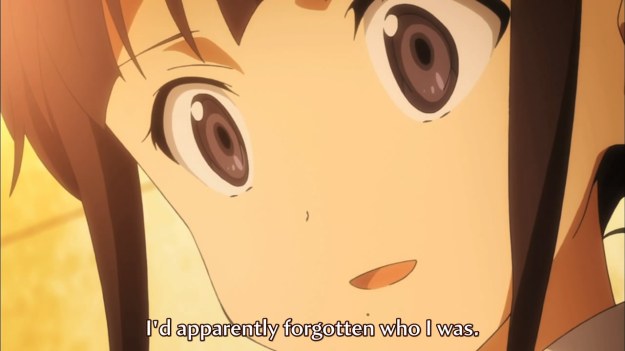 It’s not as though I find the show boring or stupid. I just think Kokoro Connect plays it extremely safe. The anime tantalizes you with some rather intriguing possibilities regarding one’s personal identity, which I’ve even touched upon in a post about two weeks ago. But that’s just the thing: the anime teases you with the possibilities of what it could be, but in the end, the show is just another typical romantic comedy with a wasted gimmick.

So where do we go from here? The episode leaves Iori’s trauma unresolved for now. Some very obvious questions spring to mind regarding her story: is it possible to construct multiple facades or are they all just different facets of a single ego? How can she say that there’s no real her underneath all the myriad personalities she puts forth? Even if we grant that those personalities are mere fakes, don’t they nevertheless need to ground themselves in something permanent and concrete? 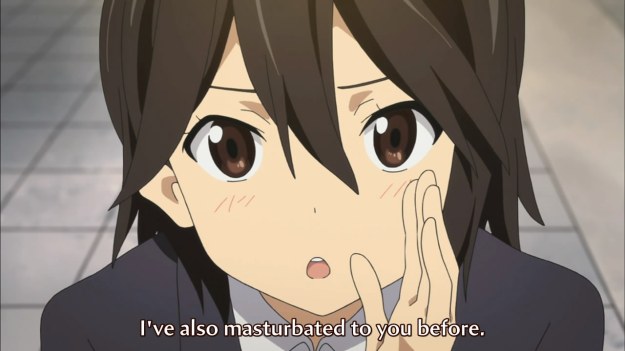 But seeing how Kokoro Connect dealt with Inaba and Yui, I have little faith that Iori’s story won’t unfold in the same disappointingly cursory fashion. Even if I had liked how this week’s episode unfolded, wasn’t the resolution just so anti-climactic? After all, what ends up being the encore seems to be the idea that the typically brusque Inaba masturbates while fantasizing about Taichi. Oh, I guess she’s can be a girlie girl too. Whoop dee doo.