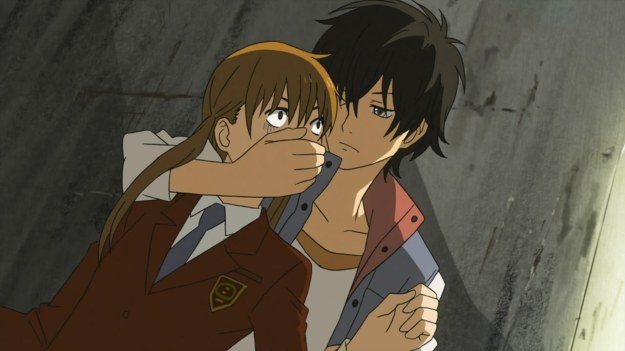 Right now, the massive storm clouds of umbrage find themselves hovering over Tonari no Kaibutsu-kun. People are taking an exception with a certain rape joke in the first episode, and I can’t blame them for that. Now, I didn’t personally find the scene offensive, but I can only speak for myself. On that same token, it has always been annoying to me when others insinuate that we can choose when and where to be offended. Usually, taking offense to anything is a gut reaction. I have not nor will I ever pause and think to myself, “Gee, should that offend me?” In saying this, I hope to establish the idea that this isn’t a post about whether or not one should be offended by Tonari no Kaibutsu-kun‘s antics. If it bothers you, then it bothers you.

Since I mentioned Day in my previous post on Tonari no Kaibutsu-kun, let’s continue with that train of thought. Now, she’s well within her rights to react negatively to the rape joke and Haru’s behavior. This is not, however, my area of contention. Instead, I want to quibble over some of the arguments being made about the show as a whole. I think it’s a little too early to say where the story is going, and as such, I think we can fall into the trap of painting some rather broad strokes about the show’s message without considering the devil in the details.

The guy starts going to school again. He follows me everywhere and won’t leave me alone. My teacher is relieved because he seems to have made a friend, and doesn’t seem to notice that I am uncomfortable with the situation. I try ignoring this guy, and I try to put him off by telling him I’m busy with studying, but he won’t stop bothering me. As we are walking along after school one day, he forcibly kisses me

Does it? I find it very interesting that a lot of Haru’s romantic gestures are inspired by manga. Consider the following scene:

Teacher: “Yo-Yoshida-kun, you’re supposed to treat girls with care! I’ll lend you one of my favorite books! Okay? Get along now!”

Haru: “‘That was when he placed his arms around me in a gentle embrace, and my heart began to pound…'”

What follows is a ridiculous image of Haru embracing Shizuku from behind. If the act is meant to be romantic, Shizuku’s expression belies that notion. Let’s take a look at another incident. Shortly after forcibly kissing Shizuku, Haru quickly turns to his manga, i.e. his guide to romance: “Huh? My heart isn’t pounding. Huh? Why not? So I’ve noticed that you don’t make my heart flutter.” The fact that many people find Haru’s actions uncomfortable can’t be accidental, especially when you consider the fact that he’s taking advice from what is likely a crappy romance manga. As a result, the anime has to be — on some level — tweaking the idea that people can find any meaningful inspiration from pop culture.

People have also been complaining about how Haru never once considers Shizuku’s feelings. I won’t deny this troubling lack of consent. Nevertheless, I want us to consider the details: Haru has no proper role model. We’ve already seen one of the teachers lead him astray, so here’s another one missing the mark:

Haru: “Sensei! What does it mean to treat someone with care?!”

Sensei (he’s also male, for what it’s worth): “You need to be considerate.”

Haru: “What do you do to be considerate?”

Sensei: “You should do nice things.”

But that’s wrong, isn’t it? To be considerate, it might help if you actually consider other people’s feelings. But again, a role model gives Haru the wrong advice. Haru is told to simply do “nice things,” whatever that means. Ah, perhaps those “nice things” can be found in the manga that the other teacher had given him. And as Haru consults his teacher for all the wrong advice, he is oblivious to the ironic fact that Shizuku is lost in her own thoughts and worries right besides him. 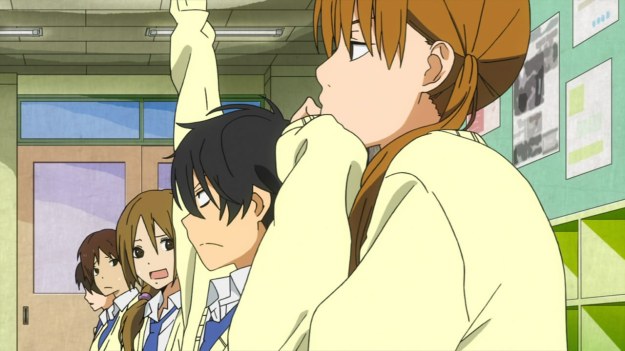 How about when Shizuku tells him that she’s heading off to the gym, so Haru reacts by stripping naked?

What’s normal about this though? Surely, it isn’t normal in real life. Ah, but is it normal in trashy romances? Do lovers unrealistically steal off to a gym and become intimate during the school day? This is your brain…

…and this is your brain on manga. Look, I’m not going to excuse Haru’s behavior, but there seems to be something more going on here. A lot of Haru’s actions towards Shizuku are shaped entirely by the trashy romance that he consumes, and the audience thus finds his behavior disgusting. Is this a mere coincidence? He’s already an awkward kid going through what is typically the most awkward years of a person’s life, i.e. his teens. If you give an impressionable guy the wrong piece of advice, what do you expect to happen?

But, you might naturally ask, why does Shizuku fall or will fall for Haru? If the story actually takes an issue with Haru’s actions, why do his actions nevertheless work on her? Well, first of all, we’re not entirely sure that they do work. Certainly, considering that this is a romantic comedy first and foremost, it’s likely that Haru will eventually win her over, but we don’t exactly know how just quite yet. Shizuku definitely has an interest in Haru, but is this due to his creepy persistence? Or is the fact that she can recognize some good in — and this is Day’s own words — “the core of Haru’s character” despite his unpleasant actions? Day isn’t wrong in saying, “But, yeah, sorry, bro, no cookies for meeting the bare minimum on some fronts and failing massively on others,” but at the same time, this is perhaps Shizuku’s naiveté at work.

Shizuka, like a lot of women, think they can fix a broken man. And while this is often a recipe for disaster in the real world, fantasy always seems to work out. Of course, we can object to fantasy painting a dangerously inaccurate picture about the real world… just like what that manga is doing to Haru. But it isn’t as though he’s incapable of change. He’s slowly learning to do some right things. At the end of the episode, Shizuku notices that Haru is actually quiet for once while she’s busy studying. She wonders why and he responds, “Because you care about studying a lot for some reason, right? If it’s something you care about, it’s something I care about.” So if Shizuku is going to fall for the guy, or if she already has, what are her exact reasons? To me, it’s too premature to argue that the story endorses Haru’s creepy actions. 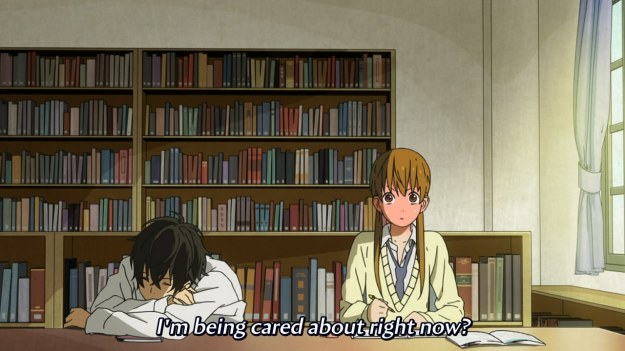 Still, my detractors can point to the fact that Haru’s kiss, despite being forced upon her, made Shizuku’s heart pound. Is this thus an example of a creepy gesture winning a girl over? Well, I don’t know. Do you think she’s reacting positively to the kiss? Sure, Shizuku flushes red and her heart beat accelerates, but who wouldn’t get an adrenaline rush if they are suddenly kissed? But let’s grant that she finds the kiss romantic. I must then naturally ask, “How would a girl in that culture — the same culture that triumphs trashy romance stories — react to said kiss?” It’s not unlikely that Shizuku, a likely consumer of the same trashy manga that Haru has been using as a guide, may find herself swept away by the grandiose but nevertheless creepy gesture as if she is a victim of some sort of cultural Stockholm Syndrome. These same manga often teach young girls to be passive targets in which men like Haru are taught to conquer.

It’s clear that Haru is meant to be a sympathetic character, and as such, it’s understandable why this can seem troubling. Even though he’s pushy, creepy, and overly-aggressive, we’re supposed to just believe that Haru nevertheless has a Heart of Gold™. Unfortunately, Haru’s type can sometimes hit a little too close to home. He reminds us too much of those self-professed “Nice Guys” who seemingly can’t take “No!” for an answer until it is often far, far too late. Nevertheless, I’m interested in seeing where the story goes from here, and I don’t think my interest somehow validates Haru’s behavior. It’s inappropriate, but I wonder if this isn’t — as I’ve stated in my initial post on Tonari no Kaibutsu-kun — somehow the point of the entire show. I’ve often been accused of reading too much into things, and my perception of the anime may very well turn out to be false as we watch a few more episodes. Even so, I just think it’s too early to tell just exactly how the adaptation will handle everything. I think the first episode gives us some rather subtle clues regarding the dysfunctional nature of romance in anime and manga.

39 thoughts on “Beating a dead horse: Another look at the Tonari no Kaibutsu-kun problem”