The episode opens by introducing us to Kira, yet another twisted character with a history tainted by murder and — you guessed it! — rape. So far, nearly every major player in the story seems to have some grimdark baggage, but to be quite honest, the result of this is that the whole is much less than the sum of its parts. Whoever wrote this story seems to think that if he or she keeps piling deranged characters into the narrative, it’ll never get boring. Unfortunately, the result is actually quite the opposite.

Whenever the audience meets a new character, they can almost be assured that there’s something messed up about the new character’s past. This is even true of the good guys. Ryuta has a serious video game addiction, and Himiko is linked to an incident involving gang rape (yes, I know she isn’t really responsible for what happened to her friends). Only Taira seems to have escaped the author’s desire to bludgeon us with people who need psychiatric help, but hey, it’s still early. Taira might too turn out to be a freak.

More importantly, however, the characters are predictable as a result of their grimdark pasts. There’s no wiggle room when you’re dealing with a murderer-slash-rapist. As a result, the potentially intriguing nature of the game goes flying out the window. Y’know how the saying goes: “Society is just nine meals away from anarchy.” Whether you agree with it or not, there’s a cynical thesis out there that any one of us will quickly abandon our morals when survival becomes of the utmost importance. With BTOOOM!‘s premise, you thus don’t really have to try that hard in order to get the players to organically descend into some variant of a Lord of the Flies situation.

Unfortunately, the anime does try too hard. With almost every character introduction, it seems as if the show constantly wants to be edgy and shocking. Meet our fat rapist! Oh, you ain’t seen nothin’ yet! Here’s a 14 year old murderer who just happens to be a necrophiliac too! I mean, c’mon, if you’re just going to stick a bunch of whackos on an island, no shit they’re going to kill each other. It’s just too predictable. Where’s the suspense? Where’s the tension? On the other hand, what if the story had opted to focus on “normal” people instead?

It then becomes a bit of a mystery, doesn’t it? The audience has to wonder, “Who’ll be the first to suffer a breakdown? Who will be the first to shed blood in order to survive and escape the island? Who makes a move to consolidate ‘political’ power?” It’s almost akin to The Thing: you just never know if and when the person next to you will turn on you. Unfortunately, Ryuta knows who to trust and who not to trust. A 14 year old serial killer-slash-rapist? Yeah, probably not him. Instead, I think I’m going to side with the curvy, blonde schoolgirl with tits till Sunday, if you don’t mind me.

• We see a young Kira murdering frogs. Did you know that according to the Macdonald triad, there are three common characteristics to which most serial killers share? Those three characteristics are apparently cruelty to animals, pyromania, and bed-wetting. The last one has always struck me as odd. Anyway, I wouldn’t take the Macdonald triad too seriously; it’s just not that simple.

• How can the lawyer lecture Kira on the wrongness of abusing animals, but then turn a blind eye to the father’s abuse? 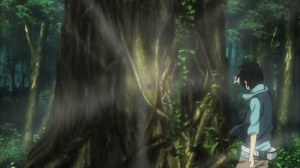 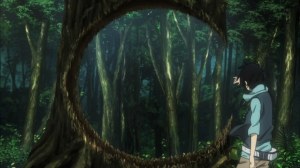 It would actually be kind of clever on the anime’s part if the bomb is meant to reflect the character’s lack of empathy for living things. This wouldn’t be too farfetched. The fat rapist from the second episode had bombs that would release toxic gas. I’ll let you connect the dots.

• Snickers have twice now made a cameo in an anime series.

• Okaaaay… apparently, it isn’t enough for us to see the abusive father grab the kid’s balls and squeeze them painfully. Madhouse felt we needed a a close-up. When I asked for insanity, I swear I didn’t have ball-squeezing domestic abuse in mind.

• Here’s another troubling trend regarding fiction and serial killers: trying to curry sympathy for the psychopath. The episode starts off by telling us that Kira had killed and raped three women. Just a quick blurb. For once, BTOOOM! isn’t very gratuitous about the rape. Over the next ten or so minutes, however, it is a pity party for our deranged psychopath. Y’see, he’s only this way because of his dad! Yeah, sure, I’m perfectly capable of understanding the basic concept of cause-and-effect, but why are we constantly trying to sympathize with our serial killers? Why do we love them so? 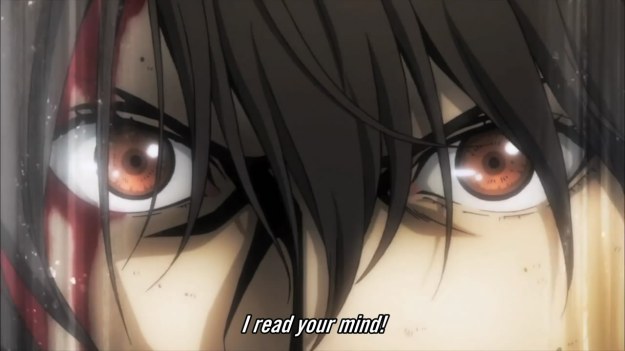 • Radar cancelling? Wow, what sort of magical video game is this?

• Ryuta going into — I don’t know what else to call it it — fantasy mode feels kind of cheap to me. This was the original conundrum: either Ryuta sticks to his morals and makes a difficult escape from a deranged killer hot on his trail, or he gives in to the game’s savage nature and kills Kira. Unfortunately, the story chickens out: Ryuta conveniently hits his head on a rock and, as a result, he mistakes his duel with Kira as simply another BTOOOM! match. Now that he’s fully engaged, Ryuta easily beats Kira, but upon doing so, he magically returns to his senses. Seriously, what a coincidence! Basically, our protagonist gets to win and still feel as though he didn’t have to compromise his values.

• And if you thought that was a cop-out, Kira doesn’t even die.