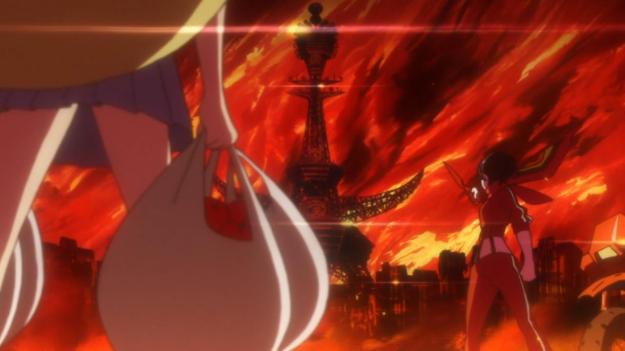 We have more of a build up episode this week, so I won’t be doing any sort of comprehensive analysis. Instead, I’ll just offer my notes and observations as I’ve always done for shows like this.

Episode summary: After Ryuuko recovers, she is determined to retrieve the pieces of Senketsu that she lost in last week’s battle against Nui. Meanwhile, Aikuro sheds his homeroom teacher persona and drives off into the horizon with some unknown (as of yet) purpose. We cut to Satsuki’s army advancing upon Kobe, Kyoto, and Osaka. The first two missions are carried out without a hitch, but Osaka appears to be quite a pickle as its resistance is backed by copious amounts of money. This forces Satsuki herself to show up on the battlefield, which indirectly helps Ryuuko as she has been traveling from one location to the next to reclaim Senketsu’s bits and pieces. As comic relief, we see Mako ignoring the entire war effort to be a typical tourist instead.

• We start off with Senketsu screaming out in pain, possibly because his bits and pieces are now scattered across Satsuki’s army. I guess what I haven’t touched upon is why and how Senketsu seems to uniquely possess sentience unlike the other garments composed from life fibers. Junketsu definitely has eyes like Senketsu, and it seems to be “alive” in some form or fashion as well, but we certainly haven’t seen it utter a single word to anyone. 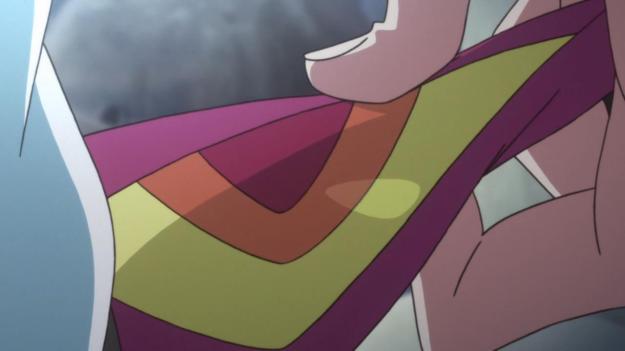 • Aikuro, perhaps jokingly, tells Ryuuko that had he arrived any later to retrieve her unconscious body, she might’ve been arrested for indecent exposure. I say jokingly because I’m not so sure the lowest rung of their society is being policed to that extent. Oh, I’m sure law enforcement exists… but just a gut feeling, I suppose.

• So what part of Senketsu determines its sentience? Just the eye-like portion of the outfit? This seems to be what this episode is implying. But if Nui is such a master couturier, wouldn’t she have identified Senketsu’s critical component right off the bat? I seem to recall that Nui attempted to dismantle Senketsu by targeting its nexus life fibers, she wasn’t aiming anywhere close to Senketsu’s “eyes” but perhaps I am mistaken.

• In any case, in typical JRPG fashion, Ryuuko appears to be on a quest to collect the “legendary weapon’s” fragments. 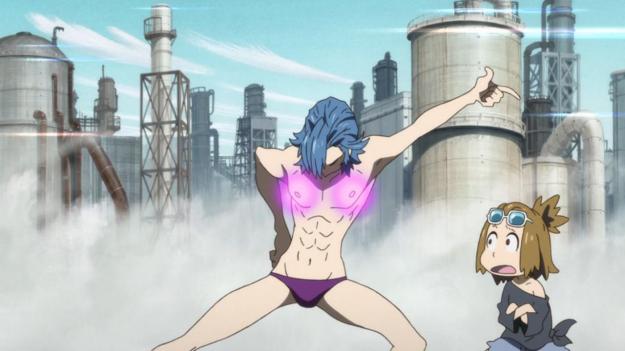 • Even when Aikuro sheds his false identity and reveals himself to a member of Nudist Beach, I see that he is still modest enough to cover his “shame” in a speedo. It wouldn’t be very difficult to have him go completely butt-naked though. No, I understand that they can’t just have full-frontal nudity, but Trigger could have gone with either a black censor box or that pixelated blurring that I’m sure anime fans are oh-so-familiar with. Nevertheless, the two members of Nudist Beach that we’ve seen so far are far from naked. Other than being a humorous aside, is there more to this contradiction? Does it imply a chink in their resolve?

• To revisit Senketsu for a brief moment, Satsuki reveals how she plans to utilize its scraps. We’ve previously known that Senketsu’s abilities can only awaken after it feed upon Ryuuko’s blood. Do the rules change when its bits and pieces are just sewn onto other garments?

• What stands out in these war scenes in particular is how the GUI that we see over and over resemble those crappy LCD electronic games or maybe even a Gameboy screen itself: 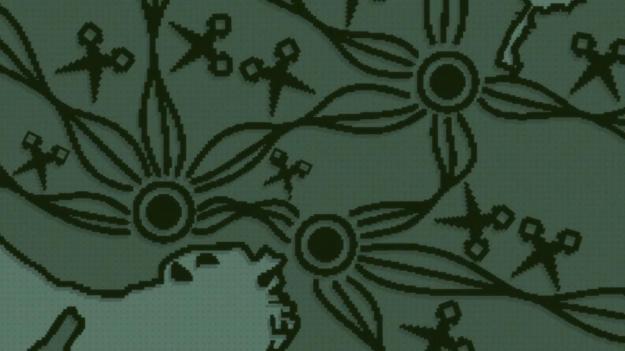 For a world with fantastic capabilities — clothes that augment your abilities with super powers — it’s peculiar how this aspect of the universe is decidedly low-tech. Unless I’ve missed something, I think perhaps the anachronistic GUIs may possibly at the actual seriousness of these events. In my previous Kill la Kill post, I alluded a bit to how the rest of the world might perceive Satsuki’s aims and ambitions as nothing more than childish games. I was basically speaking to how capitalism and its instruments are looking upon these events with bemusement. Perhaps the low-tech GUI contributes to a motif that reinforces the “children and their games” idea. Perhaps to the adults, it’s just a bunch of kids playing pretend war at the end of the day.

• Hm, I see that the football team is predominantly black even in Japan.

• Honnouji Academy’s rules are apparently so ironclad even at other schools that the rulebook can amusingly break the football players’ armor. Not that they were wearing much of any armor, mind you.

• I honestly can’t stand Jakuzure’s voice. If she’s the first major character to bite the dust, I’ll host a party at my place. 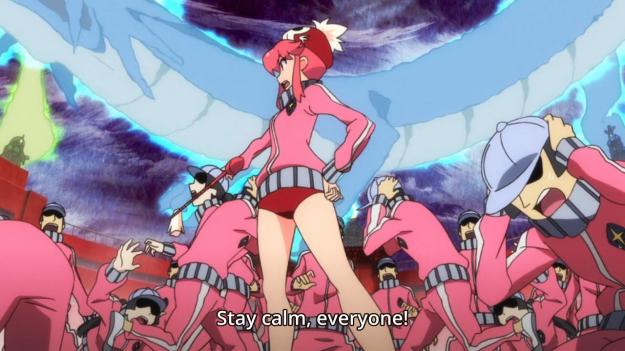 • I’m somewhat surprised her squadron ran at the sight of Kyoto’s Four Sacred Beasts. I’d think Satsuki’s army would have a little more, well, resolve than that.

• It’s interesting to see how the anime portrays the different region. Kyoto is fittingly seen as traditional Japan, attempting to fight back with historical weaponry and East Asian spirituality. According to Wikipedia, Kobe symbolizes Japan’s first contact with the outside, which is probably why we see an American school attempt to assist the region against Satsuki’s relentless warpath. Then there’s Osaka, which the anime proclaims to be a merchant town. Again, I’ll just tap Wikipedia to do the heavy-lifting for me: “Historically the commercial center of Japan, Osaka functions as one of the command centers for the Japanese economy.” Nevertheless, Sanageyama reacts with derision, calling his enemy a philistine for loving money. More importantly, though, is how he seeks to “bring down those… who reek of the old system….” There’s a totalitarian element to Satsuki’s conquest. She doesn’t just seek to unify Japan under her rule. Rather, everyone has to begin to think like her and these individualistic characteristics inherent in Japan’s many regions are an anathema to her ambitions. Again, she wishes to create a hegemonic Japan, which is definitely reminiscent of the past. 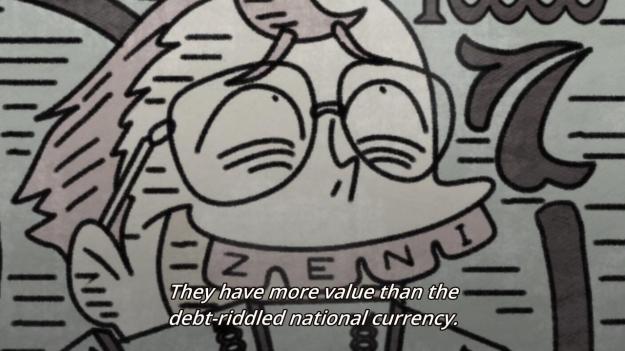 • Nevertheless, there’s something ridiculous about a money-grubbing merchant using literally money as bullets against his enemies. It’s not, of course, real Japanese money, but a new paper currency. It’s also interesting to see how negatively Sanageyama reacts to the merchant insinuations against the national currency: “If you go on mocking northern Kanto….” Although Satsuki’s army wants to tear down the “old system,” it nevertheless seeks to uphold the “old system’s” many foundations. I mean, you can’t find a much better foundation of any system than its own currency. After all, the idea is that the Takarada Conglomerate has such reach and influence now that even other wealthy people can rely upon the Takarada currency to have actual value. This, however, comes at a devaluing of the national currency. At the extreme end of the spectrum, this sort of thing might be considered treasonous, but at the very least, it’s certainly disloyal to the state to some extent.

• As oblivious as ever, Mako complains only about how her trip to Osaka will be a waste if she can’t get a souvenir to take home. And amidst all the chaos, she manages to take pleasure in enjoying Osaka’s famed street food, especially their takoyaki. To Mako, she’s still in school and this is just a school field trip. So while from one perspective, she is certainly oblivious, but from another point of view, she keeps the show anchored in the real world. Her existence is sort of a reminder that you can find enjoyment and meaning in life by just focusing on what you can do at any given moment. Mako seems to only worry about whether or not she’s a good student, a good daughter, and most importantly to Ryuuko, a good friend. She’s like a dim-witted virtue ethicist in a way. 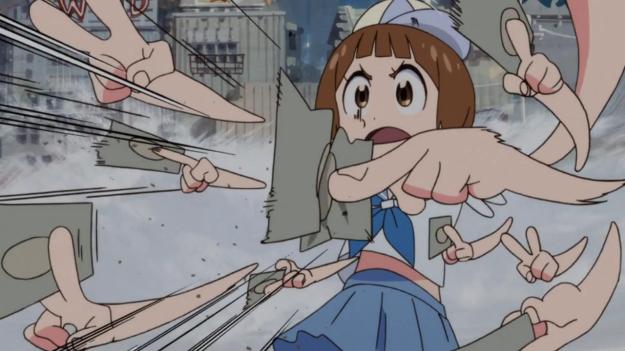 • Again, Mako displays surprising “power” in catching the money-as-bullets that have been relatively successful in repelling the rest of Satsuki’s army.

• Is she an analogue to the Greek chorus? I don’t know. I mean, she doesn’t assist in me understanding the story. Rather, she’s an important player in the narrative itself, rather than commenting on it from the outside. I’m not convinced, but I suppose I could look for compelling arguments in favor of it.

• It’s rather ironic that Kobe beef would be used to protect people against Gamagoori’s ironclad discipline. I mean, it’s so goddamn fatty, it could melt just from the body heat in your hands.

• It should be noted that although Ryuuko shows up to the fight, she only indirectly helps the regions resist Satsuki’s army. Yes, her primary concern is to retrieve Senketsu’s scattered bits and pieces, but my point is that she doesn’t even have a secondary concern. One thing I neglected to address in my previous post is that Ryuuko is also rather apolitical. She doesn’t really seem to care what Satsuki’s up to. Rather, Ryuuko only wants to discern the truth, intervening otherwise if her friend Mako is in danger. As such, Ryuuko is hardly a revolutionary character. Regardless of her actions in this week’s episode, Satsuki’s devas nevertheless manages to accomplish their chief aim: conquering Kobe, Kyoto and Osaka. 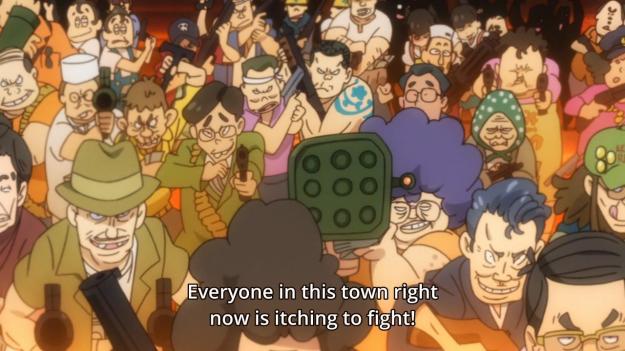 • Osaka falls back to using its adult population to defend its interests: “They’re all Combat Citizens who have been blinded by money.” On that note, I wonder how Sanageyama would feel about the massive corporation backing his master’s warpath. If these commoners are blinded by money, what are we to make of Revocs?

• Out of nowhere, Mako chimes in with some insight: “It’s because what you desire is almost in reach.” This just reminds us that it’s our will that’s synonymous with our power, and the life fibers only serve to enhance what’s already there. Again, I have to think back to Mako’s resolve to save Ryuuko at all costs at the end of the previous season. She is certainly strong, but why hasn’t anyone within the anime recognized this?