Episode summary: Guess what? Yukine runs away yet again. Kazuma, one of Bishamon’s many Regalias, warns Hiyori that if Yato doesn’t get rid of Yukine, Yato will die. Speaking of our protagonist, he reunites with Yukine for a job, but finds that Yukine has become dull because of all the conflicts they’ve been having. Yato uses a bottle of purification water to get the job done anyway, and the two of them walk off into the night. All’s not well, however, as Kazuma’s words echo in Hiyori’s mind. Plus, some shady character can be seen talking to Nora; it seems they are both disappointed that Yato’s a goody two-shoes nowadays.

• Can goddesses catch a cold?

• So not only does Hiyori make breakfast for Yukine, she dutifully carries it on a tray to his room. Quite ridiculous, if you ask me. Is he a pet or is he a friend?

• Yukine’s jealousy just isn’t natural to me. He keeps harping on it every episode, but it doesn’t feel authentic. Instead, it seems like the writers are forcing something that was never really there. After all, Yukine has been by Yato’s side for nearly every single day of the past month. Even when Yukine’s gone off to live with Hiyori, Yato still stalks after him, paying the young kid a visit at night and stuff.

On the other hand, Yukine has only met the other Reglia once. It’s not even as though Yato sits there and goes on and on about how awesome his other Regalia is. It’s not even as though Yato goes out to see her. In fact, he never even talks about her. So I just don’t feel it. I understand that young, immature people can be irrationally jealous, but Yukine’s feelings are coming from out of left field. It’s like “Whoops, we need a conflict. Let’s make the kid jealous without bothering to develop it.”

• Apparently, Nora isn’t solely a person’s name. In Noragami, Noras are a god’s disgrace or something like that — a Regalia with many owners. More importantly, they can’t be trusted because their loyalties are all over the place. Nevertheless, they exist because they can perform tasks that you wouldn’t necessarily want your average Regalia to do. Something taboo, perhaps.

• Bishamon’s get-up at the start of this week’s episode looked pretty cool:

Too bad she’s back to her bikini top and mini-skirt number when we see her again. I mean, at least give the poor girl a properly-fitting top. Lame.

• Goddamn, Kazuma’s got something real bad for Yato: “Please help him. I don’t want to lose him.” What’s going on there, huh?!

• I think it’s a cheap trick whenever a show or a movie cuts the sound just as one of the characters are about to say something important. Now, the same sort of thing didn’t bug me when it occurred in Lost in Translation, because by that point, the story was essentially over. What Bill Murray’s character specifically whispered to Scarlett Johansson’s character is not really all that important in the grander scheme of things. In this episode of Noragami, however, I feel as though the gimmick’s only being used to create an air of artificial suspense. After all, we’ll find out exactly what Kazuma said to Hiyori. We’ll just have to wait for some odd reason, however, and it’s not as though this wait will give us a deeper understanding of either the show or its characters. 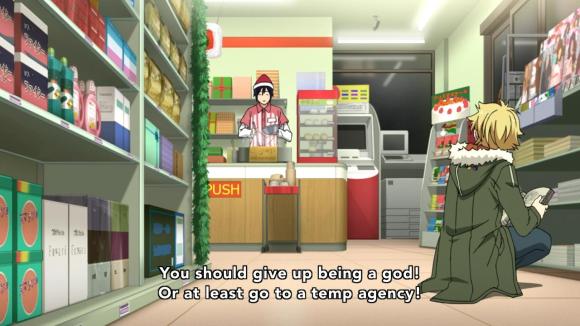 • It’s tiring to see Yukine continue to whine even if he’s just a child. He has Hiyori to dote upon him, and at the end of the day, Yato still tries to take care of the kid when our hero’s been spurned repeatedly. Nevertheless, Yukine thinks he has the right to decide what is and what isn’t a good enough job. I sympathize with how little people care about his feelings, but now he’s gone too far. C’mon, a job’s a job. If it gets food on the table and it isn’t morally objectionable, who cares? The problem is that there’s always this pressure in Japan (and other first world nations to a certain extent) to get that corporate job, so as a result, people look down upon most other positions even if they are good, honest work. This mentality, however, is just unsustainable. We can’t all be white collar workers and there’s no reason to give a blue collar worker any less respect. Respect a person for his or her moral character, not what he or she does for a living.

• “Man, this sucks. Why do I gotta put up with this crap?” All you’re doing is sitting there and reading manga!

• Good lord, really? Of all the things to steal, Yukine steals a box of donation funds for disaster relief victims? This isn’t just a kid acting out. This is more like moustache-twirling evilness. It just seems… weird, y’know? I know the kid’s whiny and ungrateful, but would he actually steal from the needy? There are just some odd narrative decisions being made right now that’s completely taking me out of the story. I can totally understand a selfish character acting out, but this is like Monty Burns level of selfishness. 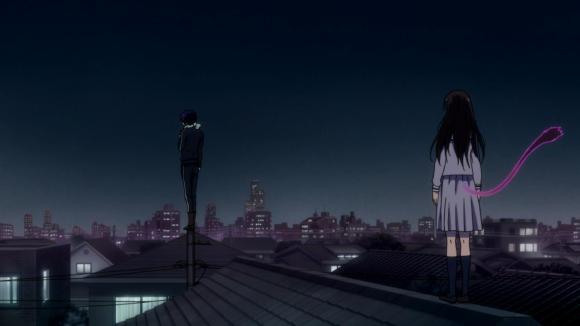 • So the big ol’ lesson for Yato is that he needs to be more considerate of people’s feelings. He should not just see them as nothing more than mere stepping stones towards accomplishing his dreams and goals. Eh, seems reasonable enough.

• So what Kazuma really said to Hiyori was that if Yato doesn’t dispose of Yukine, Yato will die. Big revelation there. Was it really necessary to keep it a secret until the end of the episode? I think not.

• I’m rather frustrated by the last few episodes because it feels as though Yukine and Hiyori aren’t developing as characters. They don’t have to instantly acquire epiphanies — I’m not asking for the characters to have all the answers to life’s problems — but it doesn’t even feel as though the two of them are making even the slightest bit of progress. Hell, I’d even take regress, but they’ve both remained rather static. The one big step in either direction comes from Yukine, but it’s not even a believable step. Like I’ve said, I can understand him acting out, but I just don’t buy the idea that he would steal from the needy. It’s just too extreme. In any case, my point is that Hiyori still hopelessly dotes upon a kid who sorely needs discipline, and Yukine still obstinately runs away from the people who care about him. It’s been three episodes now and it’s getting to be rather tiring.

Honestly, if an ill-fitting top is the worst of the fanservice in a shounen title like Noragami, then I’ll count my blessings. (I’m also grateful the creators didn’t see fit to endow Bishamon to ridiculous extremes.) That said, I do think her other trenchcoat/suit-and-tie get-up we got to see this episode is far snazzier than her usual outfit… not to mention probably a great deal more practical.

Honestly, if an ill-fitting top is the worst of the fanservice in a shounen title like Noragami, then I’ll count my blessings.

I’ll never give in!

A lost cause perhaps, but a noble one. Hang in there.

Yeah, I was kinda confused about Yukine stealing the donation box too. It just seemed so pointless. Not only was there a trifling amount of money in it, does Yukine even need money in the first place? Given that he’s pretty much invisible and can steal stuff easily if he wants to… as you said, it feels like an odd narrative decision.
Thanks for the write-ups, they’re good :-)

I had initially paused the anime to write, “There’s no way he would steal money. He has no use for it!” Then I saw the very next scene with the donation box, so I had to go back and delete what I had initially written.

I keep mixing this episode and the 6th episode into one. They’re both pretty much the same, and if the next one feels the same way, I’m probably gonna drop this series. It just seems like they’re stalling a bit, then have some big build-up where the world is at stake, then conclude the problem into 2 episode where we think one (or all) of the main characters die (or whatever happens to dead people/gods) but then they come back and all is well. Then probably have a noncanon 4-episode special, or something.

I also don’t understand yukine’s hangup over yato having nora as a shinki. so yukine’s solution to go to another god who has an entire harem of shinki?

I ain’t sayin’ he’s a gold digga, but he ain’t hangin’ with no broke… uh, Shinto god, yeah.