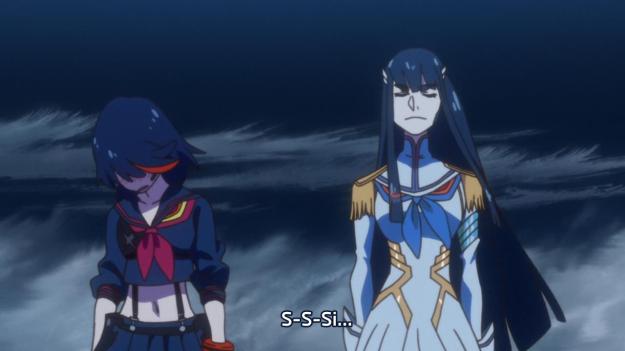 But yeah, Satsuki’s right… that “nee-chan” thing is just cringeworthy.

Episode summary: Ryuuko beats Nui up, but in her hesitation, she allows the Grand Couturier to escape. Nevertheless, Ragyou is unfazed by the news. Nui swears that she’ll get her revenge as she works on finishing up the Shinra-Kouketsu, whatever that is. Meanwhile, our heroes plan their final assault on Honnouji Academy in order to stop Ragyou once and for all, but they run into a little trouble when the bad guys launch a pre-emptive attack.

• According to Ryuuko, “…Senketsu also has Satsuki and Mako’s blood flowing through him.” She even adds, “Compared to that monstrous Junketsu, [Senketsu’s] much warmer…” I thought the bit about how Satsuki’s blood is now flowing through Senketsu is a nice touch. Will Satsuki ever be redeemed in my eyes? Eh, I don’t know about that. But what we have in Senketsu is a bit like a marriage, and what you often get in a marriage is something old and something new. It’s highly doubtful that the relationship between Ryuuko and her mother can ever be repaired, but Satsuki is perhaps the last shred of evidence that anything good can be salvaged from it. At the very least, you can say Satsuki has good intentions even if I don’t particularly agree with her methods.

As for Mako, she represents the “something new” because she’s Ryuuko’s new family. Some people get too caught up on the idea that “blood will always be thicker than water,” but as I’ve said in last week’s post, you don’t actually need to be made of flesh and blood to have personhood. Likewise, you don’t actually need to share a common blood to be family. Family is just the group of people who are willing to genuinely make sacrifices for you, i.e. they’re not expecting anything in return. As we can see, that defines both Mako and Senketsu to a tee.

• If there were still any doubts about Senketsu’s personhood, we see the Godrobe cry buckets of tears upon hearing Ryuuko’s words.

• So, uh, what were the scissor blades made from, anyway?

• Oh come on, Nui gets away yet again? Ryuuko runs out of blood yet again? Why did Ryuuko even bother to give the Grand Couturier a chance to give herself up anyways? It just seems silly that Ryuuko could finally put the unambiguously evil character out of her misery, but our heroine relented. And at this stage of the narrative too! What, are we going to have yet another showdown between our heroines and Nui as the story draws to a close? C’mon, Kill la Kill. For an anime with the word ‘kill’ twice in its title, you seem oddly reluctant to actually kill off any of the show’s major characters.

• It’s amusing to watch Ryuuko argue with Satsuki’s underlings. Both sides are yelling at each other, but they’re both missing the point entirely. Satsuki’s no ordinary human primarily because her incredible charisma has inspired such loyalty from her subjects. Satsuki’s definitely strong, but will she ever be as physically strong as either Ryuuko or Ragyou? Probably not. But despite this, she didn’t build her empire on force and force alone. She’s like that hardass teacher you hate, but you nevertheless respect him or her anyway, so you end up trying your damndest on the exam. In that sense, Satsuki is certainly strong enough to help Ryuuko in their final battle against their mother. Can the older sister go toe-to-toe with Ragyou in a duel? Judging from what we’ve seen in previous episodes, Satsuki probably wouldn’t last very long. But she can lend her strength in other ways: 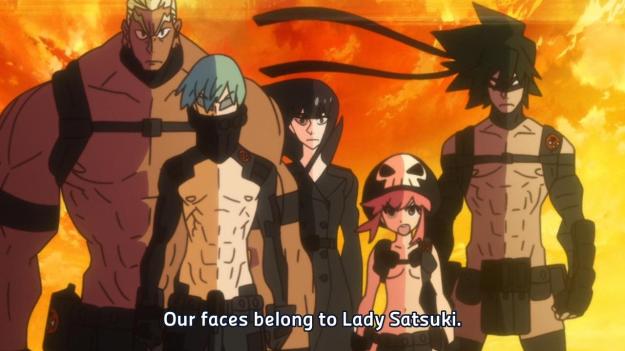 As for the younger sister, Ryuuko is a bit of a loner in comparison. Yes, she’s got Mako and Senketsu by her side — and those two are like family to her — but she’s not an inspiration is what I’m trying to say. At the start of the series, Ryuuko arrived on the scene like a ronin on a solitary quest for revenge. Over the past twenty-two episodes, she’s had to learn over and over how much Senketsu means to her. Hopefully, this time the lesson will stick for good. But anyway, my point is that Satsuki had once commanded an army, and she still can if she could just rescue them from the human-form COVERS. Yes, she built her empire through fascism, but hey, you can’t say Hitler was never loved. On the bright side, at least Satsuki has never committed genocide… that we know of.

On the flip side of the coin, Sanageyama is all, “There’s no way in hell we’d let such a half-hearted punch hit Lady Satsuki!” We in the audience know, however, that Ryuuko never really wanted to clock her sister anyway. We know that deep down she’s grateful for what Satsuki had done to help save her from the brink of no return. At moment, both sisters are just not the type to make gushy, emotional confessions of familial love, and let’s hope the shows ends long before they ever do. But seriously, what Sanageyama mistakes as sign of disrespect is really just the sort of nonsense that you see in a lot of sibling rivalries. That’s why the punches did no damage to either Sanageyama or Gamagoori. Ryuuko wasn’t going to hurt Satsuki; she just wanted to send a message. Satsuki’s underlings are just too thick in the head to realize it.

• Satsuki confesses that she was only giving Ryuuko a hard time in order to toughen the latter up: “I tried to train you so you would be of use against Ragyou’s army.” She admits, however, that this was wrong of her: “But I was sorely mistaken. At the end of the day, I was doing the same thing as Ragyou. Of course I couldn’t defeat her that way. The biggest fool of all… was me.” This is the same girl who once referred to her people as pigs in human clothing. In other words, she didn’t understand anyone who didn’t conform to her will. Back then, Satsuki believed in only her vision of the world, and anyone who disagreed with it had to fall in line or be discarded (see: the no-stars). And because she embodied the Nietzschean Ubermensch, she believed that she was the only one who had the power and resolve necessary to change the world.

Through the course of the series, however, Satsuki has come to see the strength of what she cannot understand. And even though she still refers to other people and their worldviews as “incomprehensible things,” she now has an appreciation for them: “But now I know that the world is not a piece of cloth. …and that’s what makes it beautiful.” This change in Satsuki’s character is perhaps like the democratization of heroism that we’ve been getting in Samurai Flamenco. This is why she now asserts that the world is “not a piece of a cloth.” You cut and alter a piece of cloth in order to shape it into whatever your heart desires. That’s what Ragyou wants to do with the world, and to a lesser extent, this was what Satsuki tried to do with Honnouji Academy. It was “You’re either with me, or against me.” Between her and Ragyou, she perhaps saw herself as the lesser of two evils. These days, however, Satsuki no longer desires to force the world to adopt her worldview; she now respects that others have valid ways of seeing and protecting the world even if those philosophy don’t align perfectly with what she personally believes.

And to really solidify Satsuki’s change-of-heart, she bows to her sister. This is a show of great humility for a character that has always been characterized by her immense pride.

• The lack of animation during the croquette-eating scene is kind of lazy though. After all the high-octane action and the emotional breakthroughs, you can’t animate a bunch of people eating croquettes and drinking tea? C’mon, Trigger. Step your game up. The shoddiness here kinda ruins the mood established by the preceding scene.

• Apparently, Iori still has his Ultima Uniform. I was led to believe Sanageyama had the last one. Oh well. Anyway, Iori’s going to produce some Ultima Uniforms from the Life Fibers they managed to collect in the previous battle with Nui. It may seem strange to rely upon Life Fibers at this juncture of the narrative, but I still maintain that the alien life-form itself is neutral. All the wrongs that the Life Fibers have committed are really just the results of Ragyou’s pulling the strings. Life Fibers are just a resource, and like any other resource, it can be used correctly or incorrectly. Ragyou wants to commodify everything, and that’s why she’s the villain of the story. If you can use Life Fibers in a way that is democratic and fair to all people, Life Fibers are hardly the bad guys at all. Yes, it’s true that Life Fibers “wish” — and I put “wish” here in quotes because this is kind of like saying viruses can “wish” to do anything — to propagate themselves across the world and perhaps the universe as well, but this doesn’t mean that Life Fibers are necessarily parasites. I think the alien life-form has merely been twisted to match Ragyou’s dark heart. After all, how else would you explain Senketsu’s benevolent existence?

• Tsumugu asks, “Is [Ragyou] trying to dress the Earth up?” Ragyou is merely taking unregulated capitalism to its logical endpoint. You’re either a customer or a product to be sold. Now that REVOCS has achieved 100% market share, the only remaining “customer” is the planet itself. Then once the planet has been consumed, it too becomes a product. According to Satsuki, the Cocoon Planet will explode, thereby releasing fragments of Life Fibers to fly off into space in search of other worlds. Well, that’s the theory, anyway. Granted, this sounds ludicrous, but at the same time, this is just the sort of exaggerated example that gets the point across. In reading my previous posts on Kill la Kill, however, it may sound like I’m some sort of Communist scum who wants to destroy capitalism, but that’s not the case at all. Yes, most successful countries out there embrace capitalism, but no one embraces unregulated capitalism. Every successful economy has rules put in place to ensure that the system doesn’t come crashing down at the hands of a handful of people.

Nevertheless, if we’re hedging our bets this much, i.e. the show isn’t necessarily against capitalism in general, aren’t we just attacking a straw man then? Since, like I’ve said, no one embraces unregulated capitalism, what’s even the point in speaking out against it? Isn’t it already a given that unregulated capitalism is bad? Well, perhaps Kill la Kill‘s message isn’t as salient or substantive as it could be. After all, I’m not going to sit here and pretend that some shounen-esque anime series with tons of boobilicious fanservice is the one true treatise against the dangers of capitalism. Nevertheless, there’s still something to be gleaned from the show’s simplistic message. Otherwise, I wouldn’t have written so many words on it. Plus, it’s somewhat impressive in my mind that a show like this would even touch the subject.

• Well, it looks like we’ll return to Honnouji Academy once more. Hopefully, this will be for the last time. 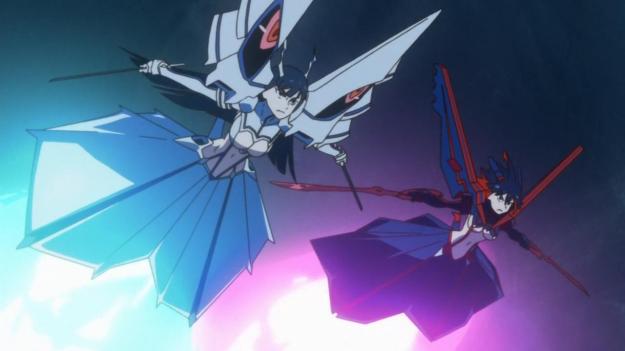 • Yeah, the sisters look kinda silly as they took off in their Godrobes. They’re basically butterflies with tits. But hey, family functions are usually embarrassing, right? One day, these two can look back on this moment and have a good laugh at themselves.

• Apparently, Mako’s been holding onto her Ultima Uniform this entire time. Geez, that could’ve been real useful earlier.