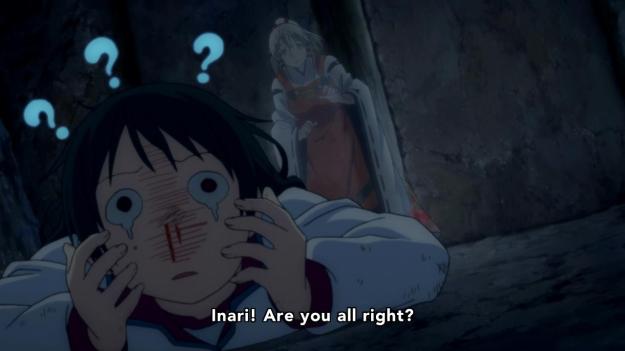 I didn’t expect the anime to be this short, to be honest.

Episode summary: Inari flies up to the Celestial Plains and frees Uka from her prison. Our heroine then gives back her divine powers, thereby saving the goddess from fading away. This means, however, that Inari will no longer be able to see or talk to Uka anymore. And… that’s it. The story’s over.

• The first six minutes of the show, i.e. a quarter of the episode’s length, is an extensive recap of last week’s episode as well as a rather unnecessarily long montage of Inari flying her way to the Celestial Plains on the back of Uka’s familiars. Oh, you can throw in some shots of Uka’s creepy brother trying to be all heroic at the 11th hour.

• There’s a briefly amusing moment where Inari’s friends try to cover for her absence. On the side, you have Kouji just standing there, staring at the girls. I think this scene just emphasizes how the guy contributes practically nothing to the narrative. Everyone has a role to play except him. I’m not even sure what his placid inaction is supposed to convey to the audience. That he’s concerned for Inari? But what friend wouldn’t be?

• Speaking of pretty boytoys, Touka is keeping himself busy too. Busy staring at the heavens and saying, “So you’re just going to up and disappear?” Uh, I gues-… 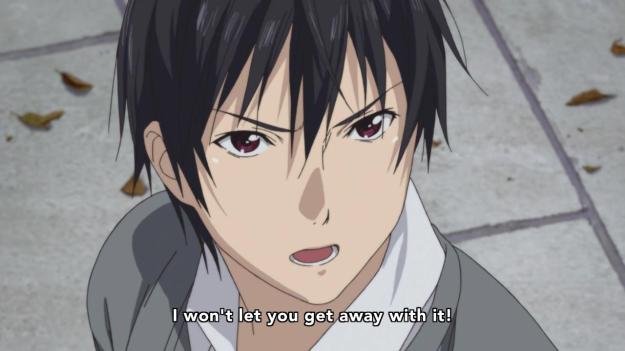 • Two minutes later, we still see Inari’s riding the wave of spiritual foxes on her way to saving Uka. As for Toshi, he’s still busy cutting his way to Uka’s prison. They’re really milking this, aren’t they? The episode’s nearly half over, guys…

• Finally, Inari reaches the cave at the nine-minute mark. But unfortunately, nobody’s come up with a plan as to how they might actually free our goddess from her solitary confinement.

And yes, it shows the resiliency of love or whatever. But since Amaterasu is the one who locked Uka away, don’t you think it’d be wiser to pay that old lady a visit instead of futilely trying to open the cave walls without any sort of proper leverage? I dunno, just a thought…

• But somehow, it works. Or maybe it doesn’t. Maybe Amaterasu felt sorry for Inari, so she allowed the cave walls to open just enough for Uka and Inari to share a conversation.

• The cave walls then slide open even more, allowing for Inari to squeeze just the top half of her body through them. Well, I guess since the atmosphere is getting a little too heavy, we may as well crack a joke about Inari’s flat chest: 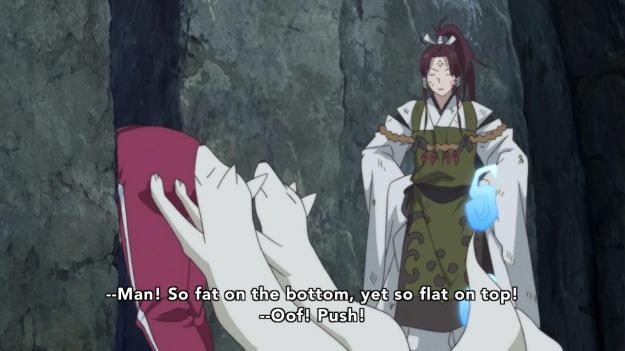 • Okay, okay, Amaterasu finally relents and lets the poor girl into the cave. After a tearful exchange with Uka, Inari finally gives the divine power back to the goddess. I… I don’t know. I don’t feel anything. It feels like this should be some super dramatic, super emotional moment, but after all that we’ve been through, I feel… nothing. But that was apparently the last episode:

Yep, that’s it. So… what did we learn? More specifically, what did Uka learn? After all, she insists, “Mistress Amaterasu, we gods may indeed be incompatible with humans. But they’re quite interesting in their impermanence. We feel there’s much to learn from them.” But what did she  actually learn though. It just seemed as though Uka did nothing but attempt to live vicariously through Inari’s shining childhood experiences. The implicit takeaway from the series is that being a god fucking sucks, so she has to rely upon a little girl for any sort of emotional fulfillment. Thankfully, everything works out great for our heroine, but Uka is still stuck being a god and all the negatives that this position entails. It still feels as though our goddess is unfulfilled. Are a few short months of feeding upon the scraps of Inari’s childhood really enough? I doubt it. Then in the end, Uka adds, “In particular, we found love to be of special interest.” Really? Really though? What love? The love with Touka, the asshole who treated Uka like shit for pretty much 90% of the story? Again, I’m not sure what she managed to learn from all of this.

The story has some loose ends, and if I had been more emotionally invested in the characters by the end of the series, perhaps the existence of these loose ends would’ve bothered me. At this point, however… eh. I’m ready to move on. I’m ready to leave the world of Inari, Konkon, Koi Iroha behind me. It’s not even that I want the loose ends to be left up to speculation. It’s that the story just doesn’t matter to me anymore. What are the loose ends? Well, what’s to become of Inari and Kouji’s relationship? What about Akemi’s feelings toward Keiko? Hell, Touka claimed he wasn’t going to let Uka get away with disappearing. What’s going to happen there? In a longer series, perhaps these questions would be addressed. But then again, I don’t think I would want to watch a longer Inari, Konkon, Koi Iroha. The anime started out as a cute and light-hearted romantic comedy. As things progressed, the story naturally had to get more dramatic, and I have no qualms with it doing so. Unfortunately, it just didn’t do drama correctly. 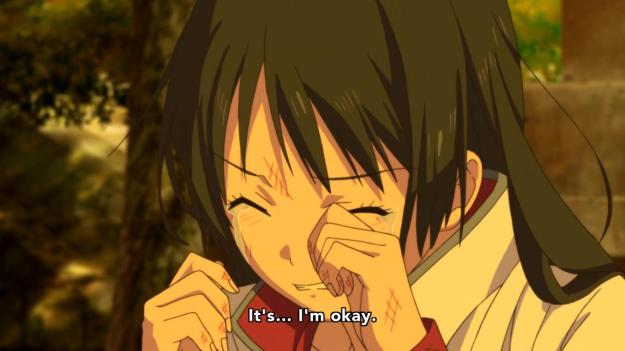 Like I’ve said elsewhere, I don’t want fluff all the time. I love to see characters deal with real conflicts. Still, there’s a world of difference between a family losing its farm, and the forced drama that we got in Inari, Konkon, Koi Iroha. Like in most lazy stories, the conflicts in this anime are born from nothing more than a lack of proper communication. Akemi and Maru had trouble becoming friends because they had trouble communicating with each other. Minami’s friends bullied Inari and her friends because of a misunderstanding between Minari and Inari, i.e. a lack of communication. Touka kept being a jackass to Uka because he wasn’t honest about his feelings. Uka allowed herself to nearly die because she didn’t want to worry Inari. Inari hid things from Uka (like how she had used her powers during the trip to the beach) for the same reason. Communication, communication, communication!

And fine, we’ve all had to deal with communication problems in our lives. As such, I can certainly relate to one or two of the conflicts in Inari, Konkon, Koi Iroha. But that doesn’t mean I want to watch an entire series in which communication is the crux of the problem in every single conflict. And that’s where the show just fell woefully short. At some point, the characters’ troubles stopped being impactful as a result of communication always being the problem. And after a while, I became emotionally spent. You can’t keep dipping your pen into the same well for all your troubles because your audience will eventually gain an immunity to it. By the end of the series, I no longer felt anything for the characters. As such, the ending did nothing for me. I should’ve been cheering for Inari. I should’ve teared up at the fact that Inari won’t be able to see or talk to Uka again. But like I’ve said, I’ve become emotionally spent because the show just kept relying on the lack of communication to drive its conflicts.

Oh well. At least the show was only ten episodes long.