God, there’s a lot of anime this season.

For a world with alchemy, this was pretty bland. So alright, Escha, the heroine of the show, wants to make something with the new cauldron. She mixes some liquids…

…grinds up some green stuff…

…chops up some apples… 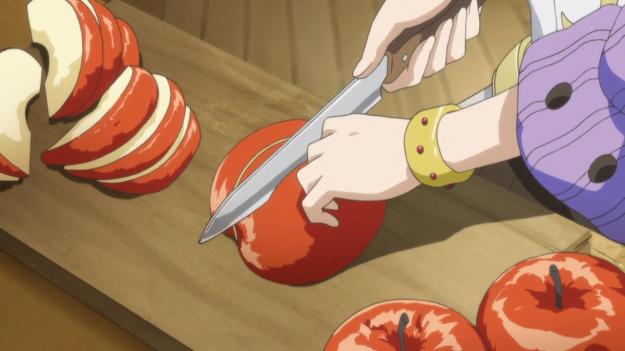 …stirs it all up…

Right. Don’t worry, the apple tart was totally delish! Later in the episode, the boss lady assigns our two main characters the task of fixing an apple orchard’s windmill. When Logy, the hero of the show, is startled by the fact that an alchemist would have to attend to such a mundane duty, the boss lady goes, “You don’t have the time to stand here arguing. Go get it done.” That implies to me that our two alchemist had better hurry! Aaaaand they proceed to have a nice, pleasant saunter through the town. Afterward, Escha and Logy even take a relaxing tour of the apple orchard itself. Cool. The episode then waits until the very last second to tell us about some unexplored ruins floating in the sky:

Supposedly, this is where all the excitement will be had, but not if we keep baking fucking apple tarts. 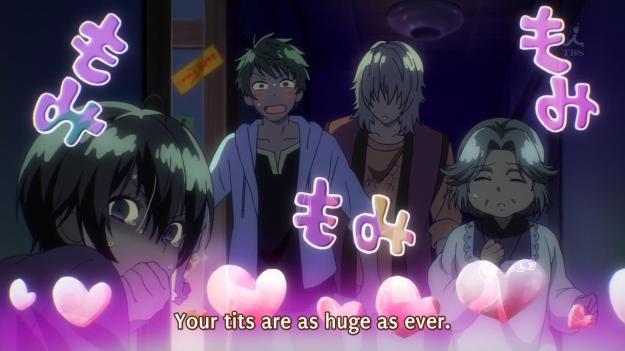 Let’s see… Shiro’s still a pervert, but he’s a total free spirit so this somehow makes up for it! Y’see, his childlike lack of inhibitions allows all of the other characters to unwind and relax! As for Mayumi, she continues to incessantly whine about the fact that she’s single. ‘Cause that won’t get old. Last but not least, Ritsu is as stand-offish as ever, but ah, Kazunari made some crappy jokes that somehow got Ritsu to smile. Gosh, guys, he’s slowly chipping away at her icy exterior! So when it came to no surprise that on horror-viewing night, our protagonist finds out that Ritsu is easily scared. If there’s anything we’ve learned from anime, it’s that unapproachable girls are always deathly afraid of something, and gosh is it cute to see them tremble! See: Mio of K-On!, Chitoge of Nisekoi, etc. We also get to see crap like grown-ups having tons of fun with bubbles. Really. Bubbles.

Near the end of the episode, the anime finally introduces us to Sayaka. Aaaaand the first thing she does is molest Mayumi. That’s just fantastic. 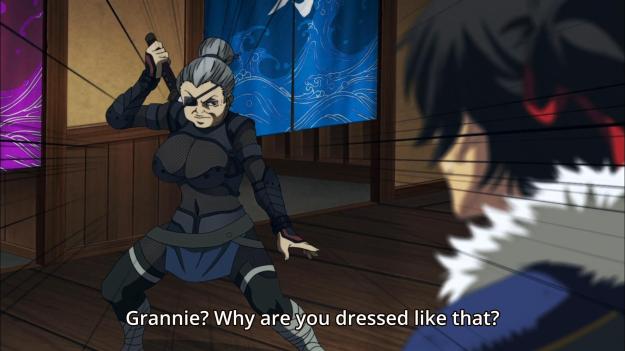 I think this screenshot pretty much says it all. This anime takes place in some alternate universe in which the Meiji Restoration never occurred. Somehow, this also means that Onigamis, basically steam-powered mechas, can also exist. But there’s one really special Onigami, and it’s the Susanoo! Legend has it that only a true virgin of the Tokugawa bloodline can pilot Susanoo. Well, lucky for us, our hero Keiichiro is totally this fated virgin of the Tokugawa bloodline! Having said that, this doesn’t mean well-endowed Japanese maidens won’t throw themselves at him left and right though.

Anyway, I imagine this show would be a whole lot more entertaining to me if any of its humor clicked. Unfortunately, none of it did, so I’m just left with a rather flamboyant re-imagining of what Japan would’ve been like if it had managed to stay isolated from the outside world. 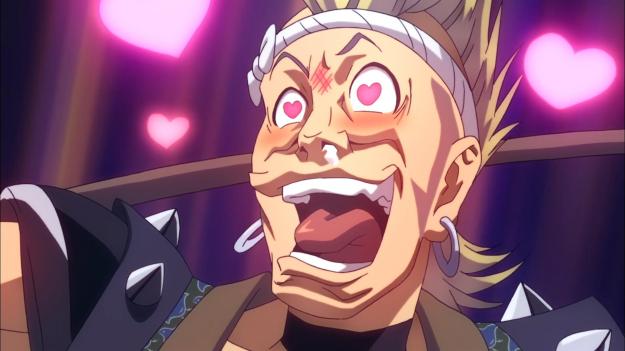 The animation employs a lot of uncomfortable close-ups of the characters’ faces, and this is not exactly my cup of tea. It always feels like we’re right up in everyone’s grill. The anime feels really claustrophobic as a result.

JoJo is manly. JoJo does manly things. The women around him are silly. Not much to say other than that I’m watching this show. 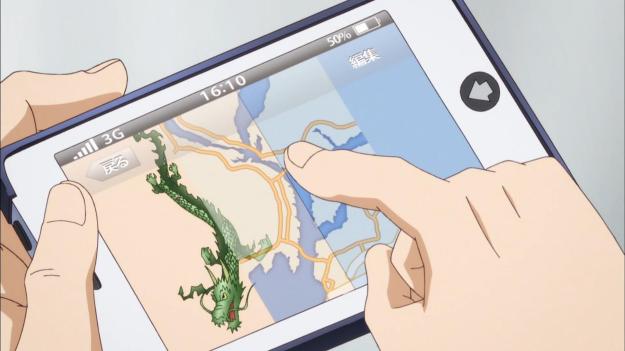 I don’t know how I feel about this week’s episode. The mystery itself is fine. It’s just that the pacing feels a bit off. The episode is pretty much one major revelation one after the other. Everyone’s got the word ‘dragon’ in their name! Everyone’s related! The tattoo isn’t a map to a treasure at all! In fact, it’s a map to a bomb strong enough to completely level Hong Kong! Anyway, as I was watching the episode, it feels as though the mystery isn’t getting a chance to breathe. I’ve said this elsewhere, but part of the fun of watching a mystery unfold is in playing along with it. You gotta give the audience a change to figure things out. The arc’s not over yet, but it seems rushed somehow. 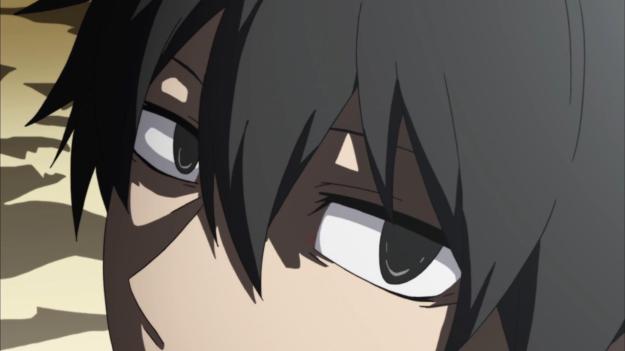 So this “HikiNEET” finds himself going outside into the real world for the first time in a long time. Why? In the middle of argument with the girl in his computer — yes, he’s got a sentient computer program haunting his PC — our protagonist accidentally spills soda all over his keyboard. Now, I’m not exactly sure why a bona fide “HikiNEET” wouldn’t happen to have a spare keyboard on hand, but since a shut-in can’t exactly live without his or her computer, our hero forces himself to go to the mall in order to buy a replacement. When he gets there, he runs into two different groups: 1) a bunch of kids his age that can apparently do… “things” with their eyes and 2) a group of criminals hoping to get a fat ransom by holding the entire mall hostage. The episode then just sorta ends.

Yeah, the show lost me. It didn’t lose me in the sense that I couldn’t follow the events of the plot. Rather, I just can’t get myself to care about anything that was happening. It’s your average Shaft anime with all of the “Shaft-isms” that we’ve come to expect from the studio. The most blatant “Shaft-isms” of all would be the ridiculous close-ups followed by a tilting of the head. C’mon, guys, are you really that enamored by something you’ve done years ago? Can’t we move on from it already? Apparently not. As for the hero of the show, he comes from a long line of neurotic Shaft protagonists trapped inside their own head. Like I’ve said, I just can’t bring myself to care anymore. It just feels all too same-ish. 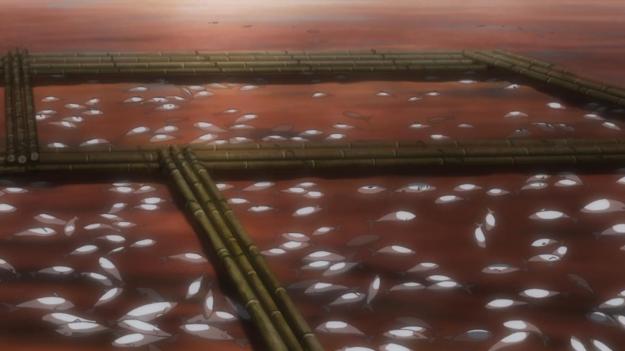 A “red tide” is essentially algae bloom. At times, the population of algae in the sea can grow out of control. Some of these algae can also produce dangerous toxins, which is why all the fish ended up dying in the anime. And of course, if the fish are dying, they’re probably not safe to eat. This applies to the shellfish as well. For a poor village that depends primarily upon the sea for sustainance, an event like this might as well be a death knell. Luckily, Mina found that pearl…

What’s interesting to me is that Mina didn’t really disobey her father. He told her not to talk to the “shore folk,” so she went and lost her voice without ever saying anything to anyone that day. According to Ginko, the only cure is to apparently hear other people talk, which makes the affliction seem harmless enough, but you can’t just listen to a single person, i.e. her father, talk. That won’t be enough. So until Mina and her father rejoin the village, she won’t be able to utter a single word. But here’s the thing: even if she hadn’t lost her voice by listening to a Mushi in a seashell, I suspect she would’ve lost her voice anyhow. Like with most of the stories in this series, this tale is metaphorical. The impending disaster is just as much about the sea as it is about the girl herself. What her father is doing to her, i.e. social isolation, is technically a form of child abuse though not quite as heinous as we’ve come to associate with the term.

Her father can’t isolate her forever; it’s just not healthy. God forbid, should Mina’s father pass away, what will she do with herself? Continue to live in isolation forever? Well, she might not want to, but by that point, she may not have much of a choice. After all, her father doesn’t seem that old, so it’ll probably be at least a decade or two before he passes away. That is, if he’s lucky enough to die from old age. Let’s imagine things continuing at this rate. Mina would’ve been isolated from the outside world until she is potentially in her mid-20s or even her mid-30s. When you haven’t had the chance to develop social skills in your childhood, you can’t exactly decide to just fit in one day as an adult. You could try, but I doubt the results will be anything short of disasterous. So like I’ve said, even if the Mushi hadn’t taken her voice, Mina would’ve lost it anyway. Her father had to change.

At the end of the episode, Mina’s father willingly gives up the pearl his daughter had found in order to save the village. When the chief asks him why he would make such a great sacrifice, Mina’s father replies, “It’s better than letting someone else die, isn’t it?” These words then make the chief cry, but Mina’s father wasn’t being spiteful or anything. Not anymore, anyway. He ultimately realized that he was being a hypocrite. All these years, he has held a grudge against the chief and the rest of the village for allowing his wife to die. Sure, he blamed himself for not being there, but let’s face it… he blamed them too. Now that disaster has struck, however, and the village won’t be able to depend upon the sea for quite some time, Mina’s father would just be a hypocrite if he allowed the villagers to die when he had the power to save them. So even though his words made the chief break down into tears, they were really meant for himself more than anyone else.

So even though Hannibal — who’s a woman, by the way — and Charlemagne have proven that they’re both more than evil enough by holding the people of Owari hostage, Jeanne somehow thinks she can negotiate with them. The girl then stupidly sacrifices herself for the sake of Owari’s people even though Nobunaga wouldn’t have done so. What a shocker it must be, then, that Charlemagne should kill all of the innocent people he’s taken hostage!

Yeah, man! You totally promised! Why won’t hostage-takers play by the rules! Anyway, when Nobunaga goes to strike Hannibal, she holds a knife up to Jeanne’s neck. This is somehow enough to freeze our Idiot-King in place. Right. He didn’t care for the hostages because “[t]his is war,” but he just can’t stand to see Jeanne die! Ah well, the chocolate-cake-baking Caesar shows up to save the day. Uesugi Kenshin too. And just like that, Charlemagne and Hannibal bite the dust in a single episode. Gee gee, friends.