It appears that the damage has been done: Yurie intends to go overseas, and she won’t come back until she has succeeded. You know she’s serious about it too since she won’t even stay to see if Dragon can potentially win the whole tournament. Ah, what bad timing. This is the episode in which Dragon frees himself from the burdens of the game, too. Perhaps if Yurie had waited just a little longer, she might have seen a different Dragon. Then again, she needs to be free herself, and to her own credit, Yurie is doing it on her own. She won’t wait around for Dragon any longer. At her young age, she should never pass up a golden opportunity anyway. Not even for love, but that’s just my opinion. If a relationship is meant to be, it should be able to survive going long distance. But I digress. My point is that Yurie likely would’ve stayed or even delayed her dream a little longer if Dragon had been a better boyfriend. It wouldn’t have been a pragmatic decision — arguably for either side, even — but love can make people do silly things.

Before Yurie leaves, however, she has a curious thing to say about Dragon: “…I’m sure Ryuu will be fine. No one’s waited for a hero longer than he has. So I know one will come for him someday. Tell him to call Auntie Emiko if he wins.” Everyone’s always in need of a hero nowadays, but it’s the last sentence that stands out to me. If he wins… if. Most people would assume that the two-time champion will easily repeat. Somehow, Yurie suspects that victory is no longer a sure thing for Dragon. Perhaps she’s just playing it safe, but still, Dragon is no longer as invincible as he used to be. And if it’s apparent to Yurie, it sure as hell is apparent to Dragon as well. He knows his time will come, and that’s why most of today’s match against Peco is so painful to him. That’s why he’s so worked up: “He never gets like that, even in the Interhigh finals.” Imagine that. A two-time champion being rattled by an unproven player. Talent knows talent, and Dragon can now see Peco’s talent clearly. 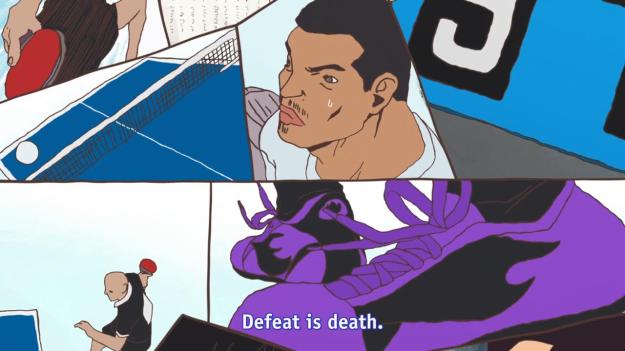 Even so, Kong makes an astute observation when he says, “He doesn’t want to acknowledge Hoshino’s talent. I know how he feels.” Dragon knows he could very well lose this match. And like how Kong used to be, losing is not an option for Dragon. After all, Dragon has never played the game for the love of the game itself. He has never played the game for himself either. Instead, he has always played the game for others: “You’ll learn one day. The anguish of invincibility. The pain of praise. The pressure of burdens. The isolation and anguish.” We know Dragon’s backstory. We know it isn’t a pleasant one. His need to win was never for himself. It was always for his family, Kaio, Poseidon, and even truth: “In victory is where we find truth.” I can’t even imagine what it must feel like to lose a father at such a young age. Not only that, he had to bite his tongue and hold back his anger when the rest of the family trashed his father at his own wake. It must have been a confusing time for Dragon. Therefore, he poured all his pain and sadness into table tennis.

What’s the truth? The truth is that his father was a great man to Dragon, and he can prove it by winning at all costs. He can restore pride to his family name by winning. It’s not so much that victory is where we find truth. It’s that victors get to rewrite history. When you succeed in life, it’s amazing how people will come pouring out of the woodwork just to curry your favor. A lot of these same people are the folks who wouldn’t have given you the time of day before. Dragon changed all of that by winning. Unfortunately, this also meant that winning was never an end in itself. Winning was always a means to some end. As a result, Dragon is trapped. Winning has become expected; it must now be an inevitability. Dragon doesn’t want to return to the old days. He doesn’t want to share his father’s fate. After all, there’s a curious thing about those bootlickers I have mentioned. Oh sure, they’ll sing your praises when you win, but they’ll be just as quick to abandon you when you start to lose.

Yurie is one of the few people in Dragon’s life who has genuinely cared for Dragon, win or lose. Unfortunately, because he is so focused on maintaining everyone else’s approval, he loses sight of her. This is Dragon’s flaw, but it’s an understandable one. He carries the entire burden of his father’s legacy on his shoulders. He feels as though he has to be invincible because his father, someone he had looked up to as a child, was not. Therefore, Dragon gets himself all worked up in today’s match. He tries to intimidate Peco, because he senses that things are different now. He’s no longer invincible. Even if he beats Peco, Smile would be waiting for him in the finals, and we all know how much Dragon respects Smile’s game. As a result, he tries to win his match against Peco with not just pure strength, but pure aggression as well: “[Dragon]’s provoking [his opponent].” It’s all gamemanship. Dragon is rattled, so he wants Peco to be even more rattled. For two and a half sets, it seems as though Dragon’s strategy is working too. Peco starts to worry as well; he starts to think he might not make it to the finals to become Smile’s hero.

Obaba has some choice advice for Peco: “Don’t think, Peco; you don’t have the brains for it.” Strategy certainly has its place in sports, but most of it is usually pre-planned. When things are happening at breakneck speeds, you don’t really have the luxury to plan out your next move. If you hesitate, you’ll see opportunities fly by. Therefore, a lot of athletes will extol the virtues of training so hard that everything becomes muscle memory. Peco hesitates for the first half of his match against Dragon, and he suffers for it. He tries to outthink Dragon, but ironically, he just ends up being all too predictable for his opponent to read. Like Dragon, Peco is worrying about the outcome of the match. After all, he’s putting his knee at risk in order to be there for Smile in the finals. If he loses here, he’ll let Smile down. By worrying about the outcome of the match or even his own knee, however, Peco is just falling into the same trap that Dragon is in. Peco’s calling card is his pure love for the game. When the kid with the bowl-cut thinks back to a fond childhood memory with Smile, he is instantly reminded that fun can make all your worries go away: “Time flies when you’re having fun.”

One of the common strategies when it comes to dealing with trauma is to have fun. You want to encourage the victim to play. Play implies freedom. Play allows people to express emotions that they cannot put simply into words, which, in itself, is freeing. You can see where I’m going with this. After his father had died. Dragon has never actually played the game of table tennis. It has become a duty to him. Winning is not just a result of his hard work; it is now his responsibility. In Dragon’s mind, he has a crisis to deal with, and therefore, he doesn’t have time to play. He doesn’t have to time to rest on his laurels. He has to keep winning, to keep climbing, to stay ahead of the bottomless abyss that awaits him if he ever stops. Dragon is so duty-bound that he couldn’t even give up a single day of his life to enjoy with Yurie. He is trapped. It is no wonder that he says to Peco, “You’re delusional. People can’t fly.” Dragon sees it backwards: in his mind, play is for the free, but people are not free. People have responsibilities. Therefore, people cannot play. They can’t afford to.

Obviously, Peco thinks otherwise: “Hey, Dragon! I’m gonna teach ya something! Table tennis is a freaking blast!” This is when the game starts to turn itself around. By having fun — by playing — Peco starts to forget his worries. He even forgets his trauma even though his trauma is of the physical sort. The act of play frees Peco and allows him to fly. This translates to the kid flying around the ping pong table as if he’s a bird without a care in the world. Pretty soon, his love of the game becomes infectious. Kong can see it too: “Hoshino’s style is offbeat. It’s like he loves the sport so much he can’t hold back it in. Playing someone like that… For me at least, it’s…” What is it? Is it liberating? Peco can’t hold his love for the sport in, so it spreads to his opponents as well. Dragon even starts to smile, which surprises his teammates. For once, Dragon recalls a fond memory of his father, a memory of a time when he was just learning how to play the game. I suspect this was also one of the few times in his life when table tennis was actually fun. 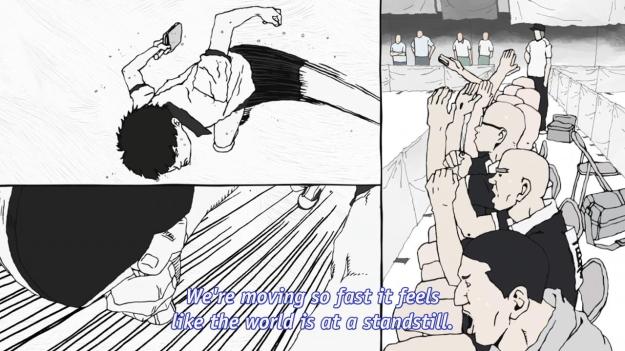 Lately, Dragon has been haunted by the same dream of his father: their trip up some mountain, which always ends with a young Dragon crying out, “Dad, watch out. Dad!” How did Dragon’s father die? Did he commit suicide? Oh well, the exact details aren’t terribly important. What’s important is that Dragon had been trapped by a single painful dream for the longest time. In his match against Peco, however, he manages to recall a fonder memory. As I’ve said, the act of play itself is freeing. It even frees Dragon from his trauma: “It’s clear who the best player is. But I don’t feel anxious.” Just as winning was once an inevitability, Dragon quickly accepts that losing today’s match against Peco is a foregone conclusion. And yet, he is no longer afraid. He even changes his stance and admits, “People can fly.” In the end, everyone frees themselves from the past. Yurie lets go of Dragon, knowing that she has her own dreams to fulfill. Dragon lets go of the past, knowing that it’s okay to lose. Peco lets go of his pain, knowing that he’s a hero.