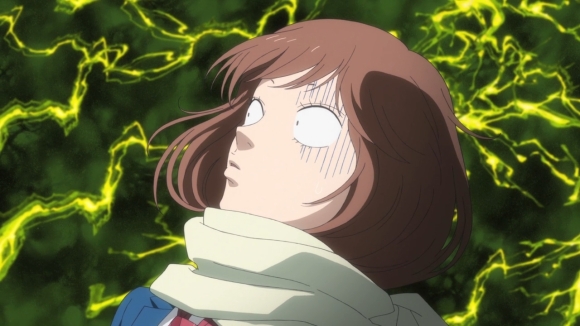 Futaba keeps going on and on about how Kou has changed, but I’m like, “Hey, I like his new personality!” Okay, maybe I wouldn’t have come right out and call Futaba’s relationship with her friends cheap and fake, but honestly, is is cheap and fake. I mean, just take a look at the situation. She’s pretending to be someone’s she’s not just so she can have friends. She’s purposefully alienating herself from guys just so that her classmates wouldn’t get jealous of her. And sure, most of us have a private persona and a public persona. Most of us act somewhat differently when we’re with friends as opposed to our family or loved ones. But Futaba goes to the extremes: “I just try to overeat to try to reduce my feminine appeal…” Are having friends that important to her? Yeah, probably.

Nah, I get it. I’m in my mid-twenties, I’ve settled into my life, I know what I want to be, I know who’s important to me, blah blah blah. So of course, putting myself in Futaba’s shoes, I wouldn’t give a fuck if some girls hate me simply ’cause I’m too feminine or that I get all the attention from the boys in class. For an unsure freshman girl in her first year of high school — and she’s probably been told before that it’s weird how she doesn’t have any friends — it’s not quite so easy. As a result, I understand why she has to pretend to be someone she’s not. Like she says, she needs it. I don’t personally agree that she does need it, but that won’t change how she feels. Y’know, peer pressure and all that jazz. Plus, it doesn’t look like she has the proper support system at the moment to deal with being the odd one out. Still, I can’t disagree with Kou: her relationships are cheap. 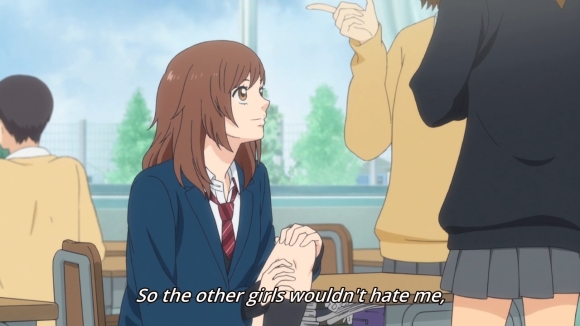 Hitting the reset button. Changing oneself completely to become more popular. Making sure you have a shining high school life. These are such common themes in shoujo romances. Not only that, the female classmates in these stories are almost always portrayed in such a petty light. Futaba says she doesn’t want to feel as though she’s alone anymore, but do you really want to be friends with people who will shit-talk a girl they’ve never even talked to? Not only that, she’s been on the other end of the shit-talking. So she should know how much it sucks. Nevertheless, she’s okay with crossing over to the other side… The thing is, you can see where Kou is coming from. As creepy as it might sound, he’s been observing her for the first two terms of their freshman year. He may not know she’s just pretending to be someone she’s not because she’s afraid of being alone, but he can probably still tell that there’s something not quite right about what he sees.

Yeah, they’ve both changed, but if I have to make a guess right now with the information we’ve been given, Kou’s personality shift is likely a result of his parents’s divorce. I’m just not surprised he’s become more acerbic and cynical. As for Futaba, there’s nothing wrong with a girl choosing to be less feminine, but if it comes out Futaba has only changed so that she could befriend people who wouldn’t have given her the time of day before, well, she won’t come off in a very good light. She may not be talking shit about Yuri, the pretty girl in her class, but her friends are. And people have ears, y’know. If Kou has really been observing Futaba this entire time, I doubt he’ll not have noticed the shit her friends have been spewing. So from his perspective, it’s like, “Why are you even friends with these people? That’s your biggest change right there.” 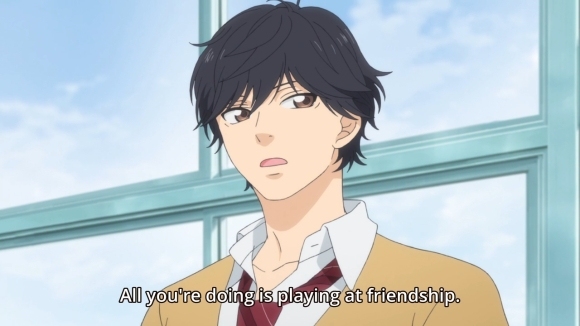 And I find it funny when Futaba remarks to herself, “He helps me, then treats me cruelly. I don’t understand him.” What’s there to understand? If you see an innocent person being accused of theft, wouldn’t you step in and help them out? If you see that justice has not been done — because the old lady seems to think she’s too good to apologize to Futaba even though the girl has been exonerated — wouldn’t you say something to rectify the situation? Basically, Kou is the blunt sort of person who calls it like he sees it. Maybe he does this too much. Maybe he can be asshole at times — like when he insulted Futaba’s relationships with her friends right to her face — but nevertheless, he doesn’t shy away from saying or doing what he thinks is right. The old lady had wronged Futaba, so Kou stepped in. Kou thinks Futaba’s friendships are shallow, so he makes his feelings be known. I’m not saying it’s right to always speak your mind, but I can at least respect his straightforwardness.

On the other hand, I’m not sure I can think very highly of Futaba. After all, we’ve been over how she’s willing to put on a front just so that she could befriend people who are, well, just not very nice. What’s even worse, however, is her blatant inaction, especially when you compare her to Kou. When her friends were trashing Yuri, the pretty girl, did Futaba tell them to stop? Nah. She merely thinks to herself how she’s totally not like Yuri anymore, and thank god for that! And back to the “He helps me, then treats me cruelly” thing. What does that even mean? Should we only help each other if we want to be nice? The way I see it, even though Kou doesn’t very much approve of what Futaba has become, he still has a strong enough moral compass to step in and do the right thing. I understand the need to put on a public face in order to make some friends. I agree that it sucks to be by yourself, especially in your most formative years. But where do you draw the line? When your friends are trashing a poor girl for no good reason, why can’t you do the right thing? 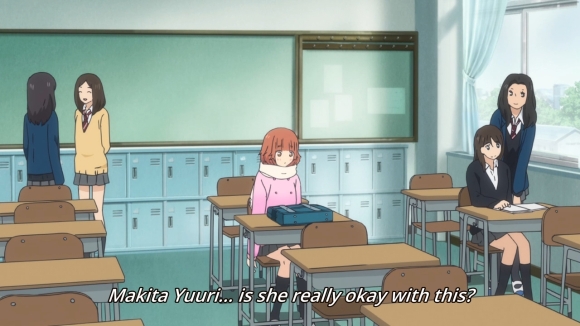 Anyway, interesting start to the anime. I might blog it for the rest of the season just to follow Futaba’s character development. Honesty, I don’t really care too much about Kou’s character, ’cause you know how it is. Oh, is this a shoujo romance? Oh, is the love interest a jerk? Wow, that’s new. Of course, the show may add interesting nuances to his character in the weeks to come. Maybe the reason why his personality has changed completely will be powerful, deep, or whatever. But as always, I’ll worry about it when I get there. For the moment, I’m fascinated with Futaba’s current situation. I want to know where her character goes from here. I want to see her (hopefully) do the right thing.

Hm, I read the manga one time but I dropped it. ‘Cause shoujo protagonists never get together until the last chapter or so.

I remember that in my middle-school years some class mates started with some personality (to me it looked somehow arrogant, I dont think that anymore) and after a while they became more “humble”. I most add that during the “arrogant” days they were somehow isolated by us and after a while they started to behave differently and were integrated in our daily activities. I wonder if they really wished to change or if they were forced by our cold attitude towards them. BTW, I am not proud of my attitude during those days. Nevertheless this is somehow linked to how Futaba mentions that once someone has changed he/she can not go back to the past. That’s a good thing in my opinion, and very natural, we change to keep moving. If we don’t change our personality we don’t adapt with our current situation, either being a scholar, worker, free-lancer, father, grand-father, etc. So, it is a good thing to change and don’t feel attach to the past even if that means that we should forget something as precious as the first love.

As for doing the right thing, I think it is easy to see when an action is wrong or right. Nevertheless how hard could it be to take an action about it. It shouldn’t be that hard, right?
I wonder if the inaction from Futaba’s character is reflecting what most people would do or not in real life. I think social groups (at school, work, etc) sometimes are so cold to some of their members.

Nevertheless this is somehow linked to how Futaba mentions that once someone has changed he/she can not go back to the past. That’s a good thing in my opinion, and very natural, we change to keep moving.

I agree that it’s important to adapt to our surroundings, but only to a point. When people make fun of you, and your first thought is to befriend them and watch them make fun of someone else, I really have to question this change. But I think we can both agree on that.

As for doing the right thing, I think it is easy to see when an action is wrong or right. Nevertheless how hard could it be to take an action about it. It shouldn’t be that hard, right?

Thing is, there are multiple ways to go about it. She could take the most direct course of action, and tell her friends to stop. But I agree, for a kid her age, it’s hard to stand up to the crowd. She could, however, not implicitly endorse her actions by walking away from the situation. There are varying degrees of actions you could take. My biggest problem is that all she did was sit there and think about how she’s no longer a weirdo.

Futaba’s character development in terms of Yuuri are pretty interesting I guess, I hope the anime doesn’t leave any more of the Yuuri/Futaba scenes out from the manga.