Let’s make this a bit more fun by arbitrarily ranking these shows according to my whims. Hey, what could go wrong?

The worst of the worst, basically.

I went back and watched the entirety of the first season yesterday, because people insisted you can’t watch the second season without the first. Nope, I still find this anime boring as hell. I still think there isn’t any meaningful tension in the second season’s first two episodes. Oh no, Sousuke’s mean to Haruka about Rin! Whatever… let’s just be honest. Certain people are willing to turn a blind eye to the anime’s faults when they would’ve been chomping at the bit to criticize the show had it been about girls instead, i.e. like every other KyoAni show. After all, who the fuck talks like this: “At this rate, we’ll have no choice but to run naked through the halls… What’s more important to you: getting naked, or getting zero new members?” Of course, the character is only even asking this particular question to plant the image of hot, naked guys running through a school hallway in your mind. But it’s still an image of hot, naked guys in high school. Just sayin’…. we’re always bitching up and down about the sexual objectification of young schoolgirls. “So this is a nationally ranked swimmer’s perfect body!” Haha, sure…. Then the guy who uttered that sentence proceeds to squirm and squeal like some stereotypical anime shoujo.

Boring. I mean, it was kind of funny when the main character yelled at the pop singers for lacking passion, then proceeded to play the most generic rock ballad ever, but otherwise, this was just as boring to watch as the first episode. Nothing crazy ever happens. There’s something wrong when I remember the different Italian dishes being served more than anything else about the anime. I could really go for a pizza margherita right about now, though…. What was even worse was when they started babbling about the Peace Souls or whatever. I just wanted to go catatonic. Plus, the main characters randomly going 3-D was rather off-putting and ugly to look at. Like all of a sudden, I was playing a cheap PS2 game. 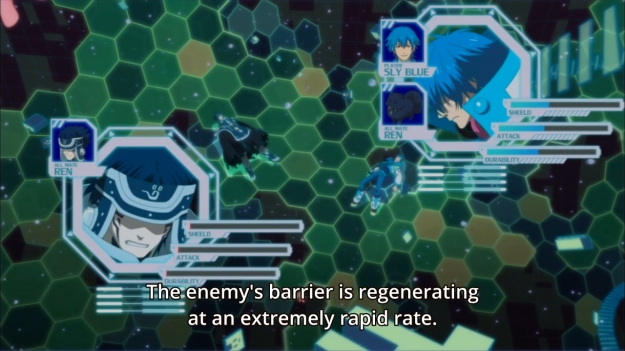 The main character was losing… until he was not. But other than the Rhyme battle at the start of the episode, nothing else really held my attention. In fact, I just had a hard time staying interested in the plot. It’s still all over the place. Wait, no, it feels like something that would make sense if you’ve played the visual novel before. With a game, you get to advance the story at your own pace by exploring the city and talking to the characters whenever you so choose. For an adaptation, the anime just loses me. The characters allude to people dying constantly, but we don’t actually see anyone die. As a result, the mystery feels distant and far off, i.e. something that’s constantly talked about but never experienced. To compound matters, the animation took a huge hit this week. Aoba’s facial expressions are definitely something else in this episode. As an aside, Ren might’ve been cute if it didn’t sound like a 40-year-old man.

At one point, Chopin’s “Nocturne In E Flat Major” is playing in the background as the camera slowly zooms into Kakeru’s face. It was like something out of a generic movie about a serial killer. Then I remember that this is a P.A. Works anime, so I’m in for a snoozejob. When Touka and Sachi go to meet Kakeru at some designated place and location, Sachi springs to her feet and stands between the other two characters as if there’s something dangerous about Kakeru. It’s just ridiculously dramatic for no reason. Kakeru’s character has been a bit… rude, but there’s nothing to suggest he’s a physical threat to anyone on the show. As a result, Sachi just looks stupid.

But anyway, what is this brouhaha even all about? What is so special about Touka that Kakeru will repeatedly insist on seeing and speaking to her? Apparently, she can see into the future! And so can he! Okay, so what? After all, this by itself does not make for an interesting story. Unfortunately, Glasslip refuses to tell us. So instead, the scene comes to the end, and the rest of the episode is all about the other kids and their silly love troubles. For example, Yukinari sees our “David” as a threat to the nonexistent relationship between him and Touka’s, blithely ignoring the fact that Touka has just met Kakeru. But since Yukinari is all jealous of Kakeru, then his own sister is jealous of Touka. Meanwhile, Hiro’s in love with Sachi, but Sachi is bizarrely overprotective of Touka–… ah, who the fuck cares?

Yanagi tells Touka — oh yeah, the latter’s blissfully unaware of Yukinari’s feelings towards her, by the way — that she intends to confess to Yukinari, but if it doesn’t work, she’ll have to leave the group. Oh no, not the group! It’s just the second episode. I have no fucking clue who these kids are, or why I should even care about them. As such, why would I give a fuck if the group splinters? There’s like no character development whatsoever here. We’re just jumping right into the middle of a potential drama bomb, but without any proper build-up, I don’t see why I should care. In fact, go back to the future-seeing thing. At least that was sort of interesting… not really, but still, it’s better than what the rest of the episode is peddling.

The problem is, Kakeru’s the catalyst who sets everything in motion, but he’s barely in the show. He has like three short appearances. For the majority of the time, I have to sit here and watch eye-rolling moments like when Yukinari confesses his feelings to Touka. Thanks, but no thanks. By the way, Touka runs off when she gets his confession. Just your average P.A. Works heroine. Confessions are scary, after all. She then calls Kakeru, because she wants to see into the future, i.e. she probably wants to find out what will happen to her group of friends. If that’s really the case, that is probably the biggest waste of foresight ever.

I don’t get Nice. Why is he still clinging onto the hope that Art is still a good guy? Who else could’ve gassed the entire room full of children. That’s right, an entire room of children got gassed. No, they didn’t die. Art seems to be going around, stealing people’s Minimums. Whereas Moral wanted to level the playing field by giving everyone superpowers, Art wants to make everyone normal by stealing those superpowers back. Y’see, the Minimums are equivalent to human sins in his mind, so he’ll be a Jesus figure if he carry all of their sins for them! Except, y’know, this makes him practically invincible, especially for a guy who has had to live with the special distinction of being the only person to graduate from Facultas without any Minimum. After all, he doesn’t just have every Minimum at his disposal. He also has the Regeneration Minimum! He’s practically invincible! Of course, if he can steal anyone’s Minimum, why didn’t he just just steal Nice’s Minimum instead of Paper’s? ‘Cause plot armor, that’s why. Anyway, the episode was dull up until the last five minutes or so when things finally happened. As a result, I wouldn’t say the anime is a decent watch just quite yet.

I mean, I guess there’s nothing really wrong with it…

The anime’s nothing revelatory, but it makes me chuckle from time to time.

The biggest gap ever!

I still think this anime has the biggest potential to bust, though. Hopefully, I’ll be proven wrong.

20 thoughts on “Everything Else, Summer ’14, Week 2: The struggle continues…”