Gotta admit… I’m still not super excited about this show, so I’ll make this quick and painless.

— We have a bit of a reversal in the damsel-in-distress storyline: Kyotaro’s trapped in the big bad baddie’s lair, and it’s up to Rinka to get stronger and save him. Of course, there’s no guarantee that she will end up saving him, but it’s shaping up to look that way. But seriously, what we have here isn’t exactly groundbreaking, but Rinka’s the lead of her own show, so it’s nice to see the story play out that way.

— The fighting on the tanker was alright. In fact, the whole tanker scene was kinda cool in concept.

— Rinka’s strong, but not overpowered. As cliche as it is to see her train with her overprotective dad. at least she’s actually training.

— The bad guys get away with it… for now. It’s a minor point, but at least it’s something. After watching shows like Captain Earth where every little conflict is wrapped up by the end of the episode with a nice, tidy bow, it’s not to see the bad guys get the upper hand every now and then. 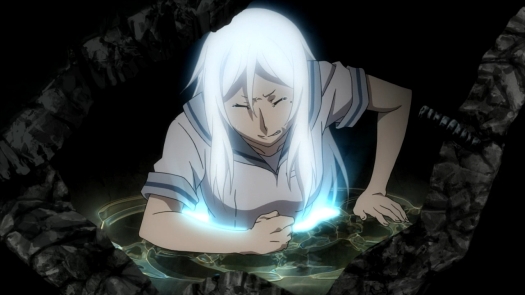 — There are even actual consequences to the bad guys’ actions. I’m not happy to see anyone in pain, but it is so unbelievable when there are no actual casualties. Again, in Captain Earth, we have yet to see a single person lose their life even though the anime repeatedly tries to convince us that the Kiltgang aliens have the potential to wipe mankind off the face of the planet. When bad things happen, people do die. We shouldn’t celebrate it, but we shouldn’t shy away from reality either. I feel too many shows are off in la-la-land, and as a result, I just can’t get emotionally invested in them. That’s not to say I’m emotionally invested in Tokyo ESP yet, but… well, it’s not a bad show. A decent popcorn anime, I guess. Nothing something I’d sit down and analyze, but not something that would make you facepalm either.

— Generic “Have you taken this seriously yet?” plotline.

— As cool as the tanker scene was, the animation when the characters started fighting was a little choppy. That was disappointing to see.

— I imagine the Professor is the primary villain of the series? Well, at least he is for this arc, anyway. Sadly, he’s not very interesting. There’s nothing wrong about his character per se. It’s just been done before. Basically, he’s the one releasing all the glowing fishes into the wild, which causes people to awaken to their “latent powers.” Why? He intends to create a new world order where, I’m sure, espers like himself are the rulers of the world. 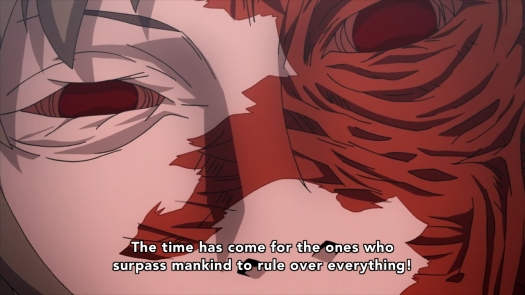 This story is perfectly fine… except we’ve seen it a billion times before. It’s not Tokyo ESP‘s fault that others have already beaten it to the punch, but I just can’t get excited to see the same ol’ plot unfold each and every time I watch a story about humankind waking up to special powers. Sure, there are slight variations every time we see this particular trope play out, but that’s not enough.

— After all these episodes, I still don’t see why the first episode was necessary. The knowledge I got from watching it hasn’t exactly enhanced the viewing experience of episodes two through six. In fact, I’ve mostly forgotten about the first episode.

— Rinka seems to have developed a crush on Kyotaro. On paper, I don’t care who pairs up with who (Rinka’s father and Kobushi is probably a bad idea, though). In fact, I kind of like seeing romance in the shows that I watch. A good romance just give you that warm, fuzzy feeling when it’s done right. Having said that, I’m not trying to imply that the budding romance between Rinka and Kyotaro is a disaster, but the way it has developed just doesn’t seem all that convincing to me. I feel as though they barely know each other. So when I see her blushing and thinking about the guy at night, I just don’t buy it, I guess.

It feels like the romance has been rushed or shoehorned into the story simply because the two main leads are of the opposite sex (but thankfully not related).

— Creepy pervert panda. I don’t care if his name is Master Roshi. Sexual harassment wasn’t funny then, and it isn’t funny now.

— Pointless censorship. There’s no need to elaborate on this.