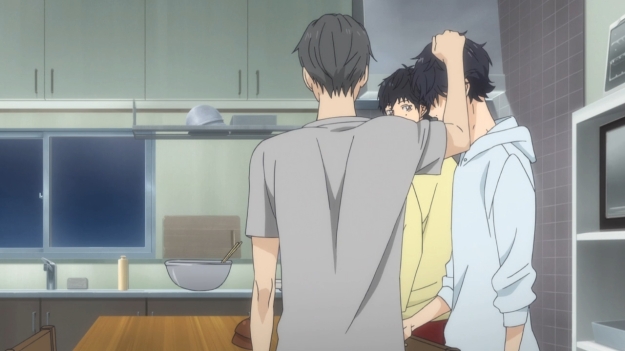 So uh, I guess this show’s over too. For some reason, I thought that this would be a two-cour series. Can you really blame me, though? We haven’t gotten anywhere. There are still so many unresolved plot threads like Shuko’s crush on Yoichi. More importantly, we’ve only just uncovered the true source of Kou’s trauma. I guess Futaba giving Kou a pep talk is enough of a resolution. And really, this just confirms everything I had said last week. Kou’s problem is a serious problem, but all we get is a pep talk. Kou’s father finally rears his ugly face out of nowhere, pats Kou on the head, then all of a sudden, the show is over! Clearly, the story isn’t over. I know that Ao Haru Ride is based on an ongoing manga series. Nevertheless, we’ve apparently hit enough of a breakthrough that Production I.G felt comfortable ending the adaptation here. And that breakthrough came from a goddamn pep talk. Next time someone’s hung up on the death of their mother, I’ll just tell them to ganbatte it up. Anyway, the resolution here reminds me of why I dislike these romance stories, so permit me to rant for a bit.

At one point, Futaba tries to let go and look at Kou’s face, but he holds onto her even tighter. “Don’t let go yet,” he tells her. He needs her. He now desires her. Even though he’s been pushing her way for the majority of the series, he is now pulling her back in. They’re not going to truly connect over a single pep talk, but Futaba got the next best thing: Kou now needs her like a drug. The thing is, they don’t have a relationship. They’re friends who kind of… have feelings for each other. But for all the times he’s helped her out, he’s also been pretty mean to her just as many times. That isn’t really love, though. Love is something you work at for a long, long time. Love takes work. Love is a series of mutual actions between two people (or more if you’re poly, I guess). Love is more than just two people staring at each other from time to time and a running monologue inside the heroine’s head. Love is this special bond between two people that others don’t fully understand. Basically, there was never any love here. At the very least, we don’t have time nor the interest to portray actual love. 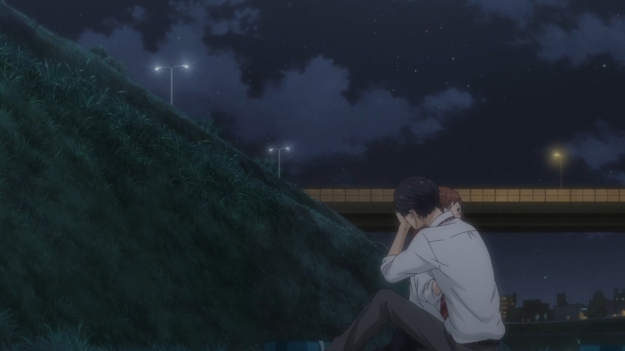 So instead, these romances cut to the chase. The key here is that Kou now desires Futaba. That’s what she’s been fighting for this whole time. She desires his desiring. We’re not here to cultivate actual love. We’re here to cultivate desire, because it’s quick and it’s passionate. It engages our emotions right away. The true conceit here is that we’re looking at love at all! The truth we don’t want to admit is that love is fucking boring. When your girlfriend has had a hard day, you make her a cup of coffee without her having to ask you, you instinctively give her a shoulder rub without even thinking about it, you listen to her when she rattles on and on about her day about the people at her work — people you’ve never even met before nor will you ever meet — and you somehow don’t feel bored out of your fucking mind (okay, maybe you’re a little bored but it doesn’t bother you), blah blah blah. Nobody wants to fucking watch that. Real love is awesome in the moment — it’s awesome to experience — but real love isn’t something we want to look at as outsiders. In all honesty, we watch passion and we call it love.

These romances can’t help but cut to the chase, compartmentalize desire from love, then repackage it as love. Love itself is supposed to be this endless feeling of euphoria, but it’s endless euphoria between two people. It’s so fucking hard to translate that experience to other people, especially people who are not or have not been in love themselves. So the ‘fun’ comes from the endless desiring. This is why the illusion is shattered when the couple gets together. The story ends as soon as the chasing stops. The story ends when it’s no longer 99% passion and 1% love. Sure, love still has desire and passion. I’m not denying that. I’m not saying I don’t desire my girlfriend just because I’ve been with her all these years. Love still has those moments where you sweep her off her feet, but c’mon, that shit doesn’t happen every single time two people see each other. The problem with our stories, however, is that it does have to happen every time the two main characters cross paths, or we get bored. It’s all about the build-up to the relationship and nothing else. The actual love itself is vestigial to all this. 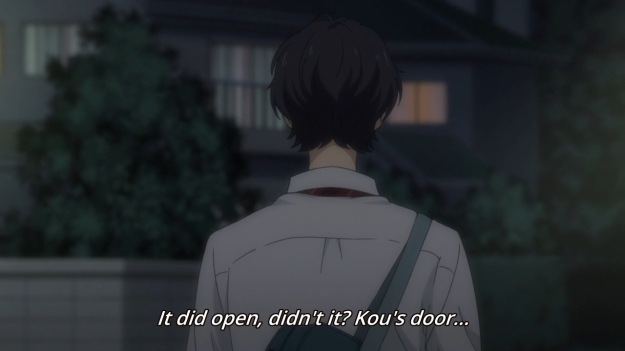 These romances know full well that the actual relationship, whenever it occurs, will never live up to the hype. How can it? When you spend 99% of the story building up to the actual relationship, how can it actually be worth the trouble? Still, this has never been a problem for these romance stories because — it bears repeating — both the actual relationship and love itself are totally vestigial. Why? Because we’re satisfied with it. We don’t give a fuck. We’re not here to to see two people connect. We’re here for our short burst of endorphins by imagining ourselves in Futaba’s place. Yeah, give that tearful speech to the hot bishie. Give it so hard, he will hug you and refuse to let go. Bam, done, euphoria achieved. No matter how much an asshole the bishie has been all series long, when the bishie embraces the heroine and the insert song comes to a crescendo, it is like a Pavlovian trick to tell us that, against all evidence, true love has been achieved. We just have to close the book on this story now to maintain that illusion. As long as the story ends now, no one will notice that we have no clue how the actual relationship is supposed to proceed.

Naturally, the manga series is ongoing, so the relationship has merely been deferred. Basically, something has come along and replaced Kou’s trauma. I haven’t read the manga nor do I plan on doing so, but since I likely won’t watch a sequel to this anime anyway, I looked up some spoilers. It turns out Futaba starts dating someone else after Kou rejected her. But even though she’s with this other guy, and even though this other guy sounds like he’s a good person, she still has feelings for Kou. Well, ain’t that some bullshit? But it makes sense, because what incites the flames of passion even more than forbidden desires? In fact, a love triangle is even better than Kou’s mental trauma! The desire becomes stronger than ever, because that desire should not even be! And because the desire is stronger than ever, the illusion of love too becomes even stronger than ever. In some bullshit, counterintuitive way, the fact that Futaba still has feelings for Kou even though she’s with a decent guy only proves that her love for Kou is the realest shit you’ll ever see. 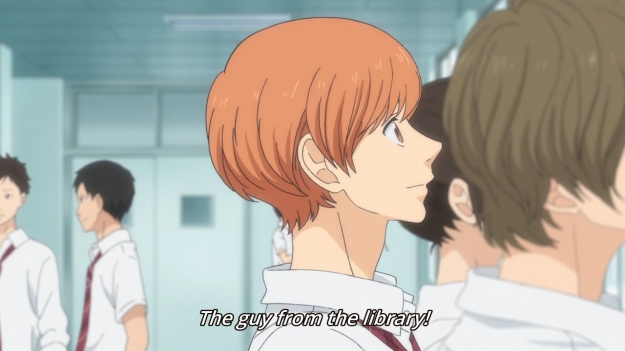 Sometimes, a relationship will be going well, but people nevertheless start to feel antsy. They think the relationship itself is too good to be true. Why aren’t we fighting? Why aren’t we breaking up so you can fight for our relationship? Why isn’t there more passion in this relationship even if that passion is often some combination of anger, sadness, and resentment? Isn’t passion the same thing as love? So even if I hate you now, doesn’t that mean I really love you? So people break up because it doesn’t feel right. It doesn’t align with what they know. It is not the same as the love they’ve seen on TV or read in books. Well, ain’t that a bitch.