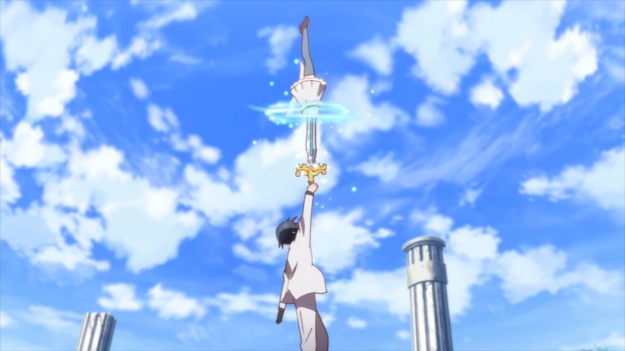 This is the end of yet another amazing harem anime, you guys. Tune in for the last of the tsundere sharks (yeah, I’m not doing that next season).

— Last episode of the season? This is how much TNK cares: 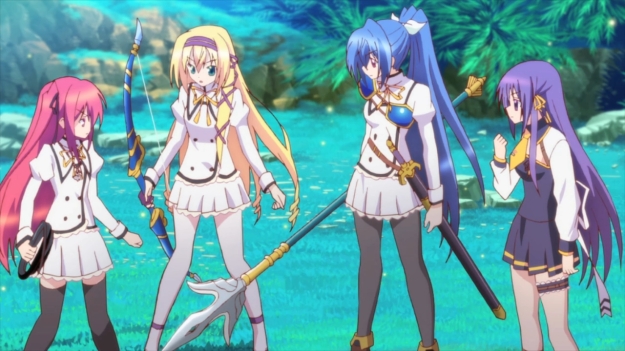 I would love to watch a documentary about the process of making anime. As you can see from the screenshot above, the budget for this show is woefully, woefully low. If it’s that low, then, well, why are we even bothering to adapt this story?

— In any case, I think the girls are going at it alone… for now. The harem lead is still injured, but we know he will eventually the fray anyway. It’s just a matter of when. 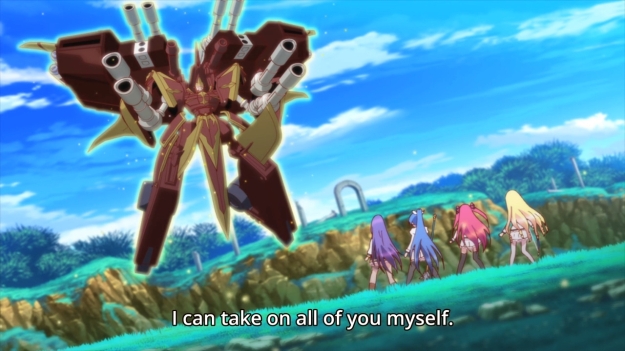 She’s just going to summon a giant, mecha-looking thing to kick everyone’s ass. When did this happened, anyway? I thought a Blade Dance would at least feature swords. And since everyone’s an elementalist, I figured we summon more shitty Pokemon-rejects. What’s with the mecha? Shows you how much I’ve been paying attention to the story…

— There’s something sadly funny about Velsaria aiming her cannons at the girls, which then prompted one of the girls to chime out, “She’s going to attack!” Give her a gold star, everybody! Naw, you think?

— Considering how Team Scarlet are all standing in one place, I really don’t think such a wide arc of explosions is necessary: 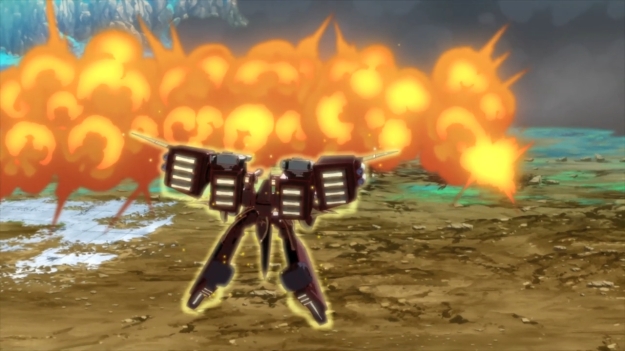 But eeeeeh, what do I know? I’m not a hot anime babe.

— Apparently, our heroines are safe ’cause Rinslet shot Velsaria’s shots down. Shooting down shots. Yeah.

— It saddens me that some of you guys are only following this show through my posts, and as such, you cannot hear the amazing sound effects coming through my speakers as Rinslet releases her ice arrows. Truly amazing sound work. I never thought ice arrows would sound like FWOMP FWOMP FWOMP.

— And the ice arrows work! ‘Cause a giant mecha-looking thing like that somehow has weak resistances to magic! An elementalist like Velsaria literally summons that thing to battle against other elementalists, so you’d think her “fortress” would be good against like-minded magic users… but naw dawg, that’s just not how she rolls.

— Uh-huh, uh-huh, use your wind-based spells to take your sister down: 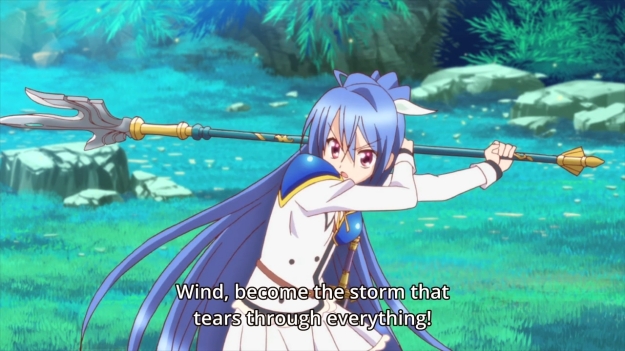 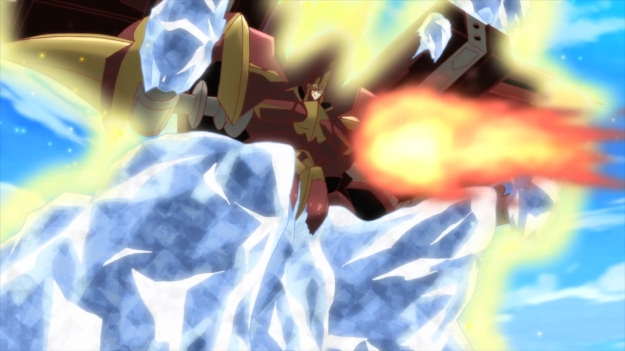 Velsaria: “Lost Queen… I thought you were smarter than this.”
Fianna: “Yes, but I like the way I am right now.”

— Eventually, Claire and Fahrenfart combine their powers to make this Mountain Dew and Cheetos tornado: 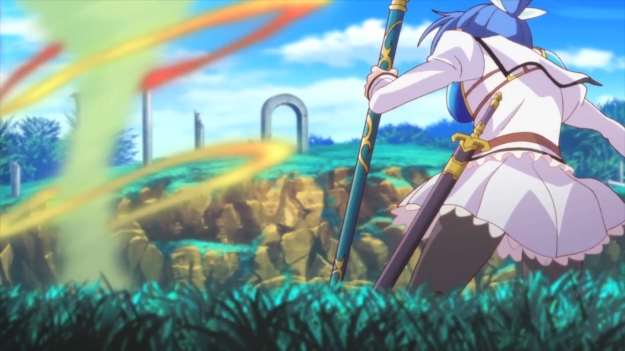 But alas, it is not enough. I’m actually kind of tired at the way this battle just keeps dragging on and on. There aren’t any real stages to it. Both sides just throw attacks at each other indiscriminately. We then cut to Kamito every once in a while so we can see how concerned he looks.

— The girls even proceed to have a conversation while explosions are happening all around them. They’re literally surrounded in smoke, but they’re all smiles and shit: 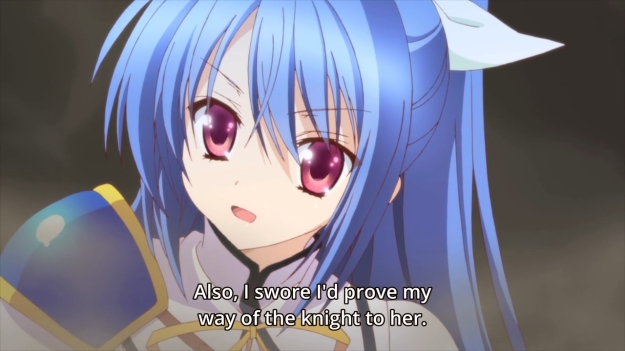 — Today, I learned that if you freeze a mecha then shoot fire at the ice, you can break the mecha. Then Fahrenfart uses her wind powers to blow the chunks of broken mecha away. So did the haremettes win without Kamito’s help? Did they really do something for themselves without his aid? 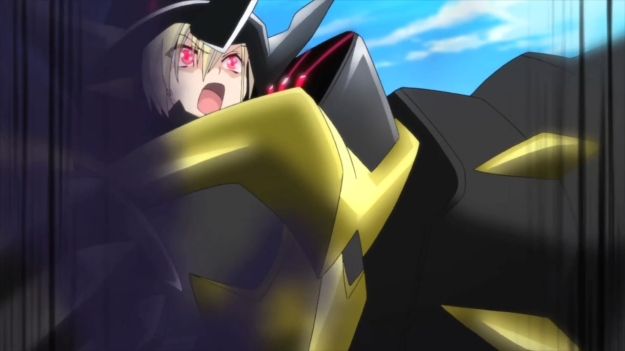 Velsaria has a cursed seal within her. C’mon, harem lead! It’s time for you to flex your dick and save your girls!

— You’d think the school officials would step in and try and stop this. Yo, one of our students is going mad and she’s just hurt a bunch of her classmates. We should do something! Nope. Not gonna happen: “I’m not very happy you’re using my students, but I’ll allow it.” 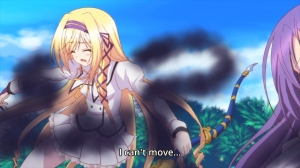 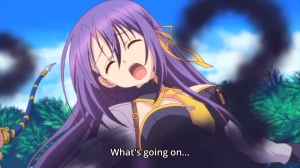 Seriously? Very much so. Luckily, Fahrenfart’s the only one unaffected. At least Velsaria isn’t into incest…

— Basically, Velsaria is draining Kamito’s girls of their divine energy. Nobody drains their energy but him, so he now enters the fray like we always knew he would. 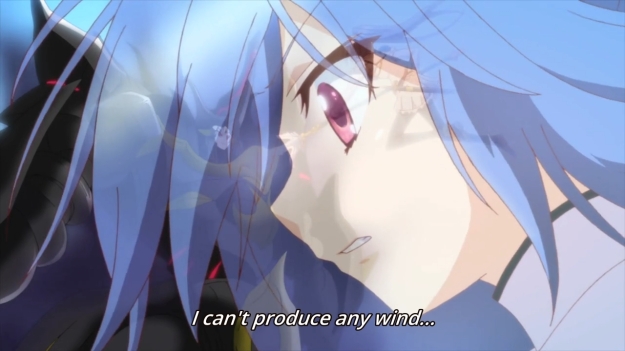 — Whoops, I spoke too soon: 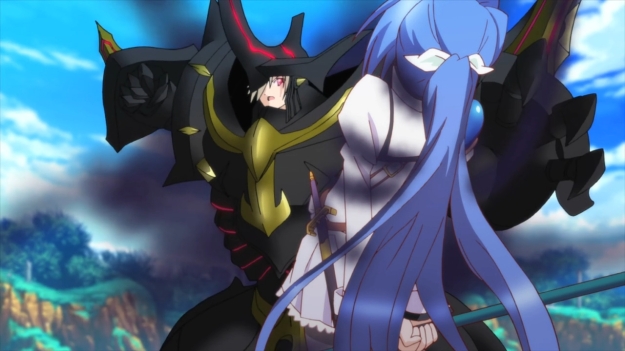 Good thing Fahrenfart even apologizes to the harem lead before her imminent death.

— Kinda looks like a dumber version of that Chobits girl, now that you think about it… 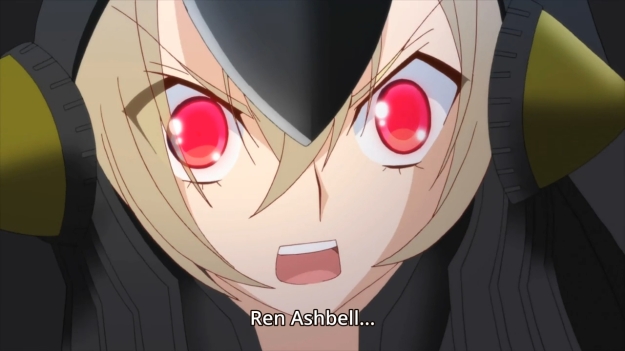 Maybe you can “turn her off” the same way.

— What gets me is how Kamito proceeds to fight Velsaria by himself. The girls aren’t even injured, but they’re still relegated to the sidelines to whisper, “Sugoi!”

— With renewed power, and some help finally from the haremettes, Kamito penetrades Velsaria’s defenses and ends the girl’s threat once and for all: 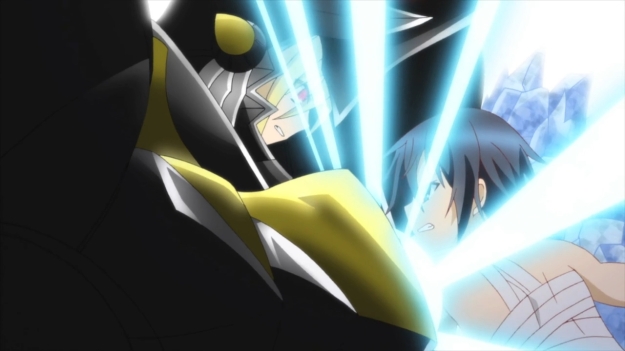 Getting a bit too close for comfort, buddy: 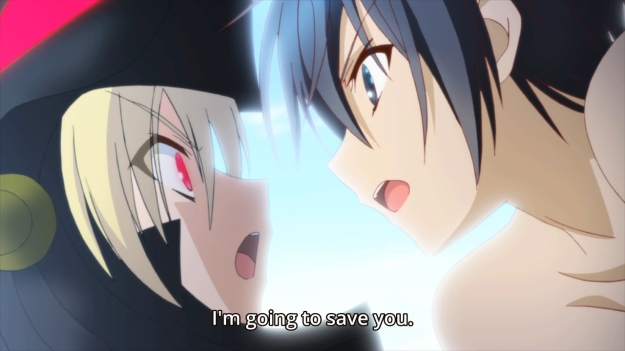 This alone, however, somehow brings the girl to tears. Uh, okay. Not only that, Restia is just posing all over the place in the corner for some damn reason: 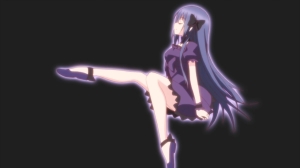 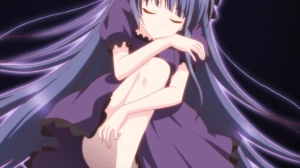 I’d love to know the guy who storyboarded this episode. What was he thinking? What made him decide that this was the best way to tell this story?

— Truth be told, I’m only even blogging this for the sake of completion. Plus, there’s nothing but M3 – Sono Kuroki Hagane left to watch before the fall season starts. Doesn’t that depress you? It kind of depresses me.

— Blah blah blah, I won thanks to the power of friendship. You have no friends, Velsaria!

— Elsewhere, the headmistress finally does something and confronts the lady who had been passing out cursed seals like candy. Buuuuut I’m about done caring about this show, so I’m just going to skip ahead of this nonsense.

— Like a lot of recent harem anime adaptations, the story never got anywhere. Why? ‘Cause this shit somehow has like multiple light novel volumes dedicated to telling its story. The light novels currently go up to fourteen, and I think the anime only covers three of those volumes. Or four. The exact number doesn’t matter. The point is, this shit goes on forever, and we can be somewhat thankful that anime as an industry doesn’t have the funds to adapt all of it.

— The good guys celebrate with caeki… 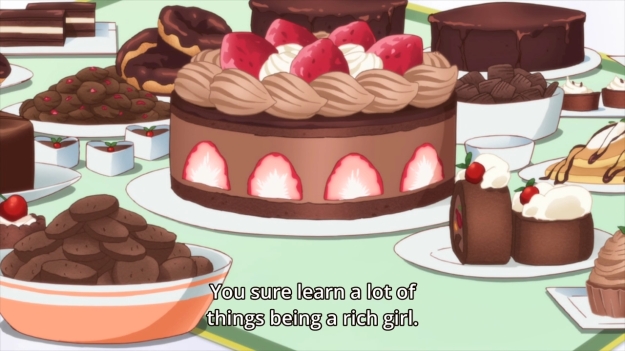 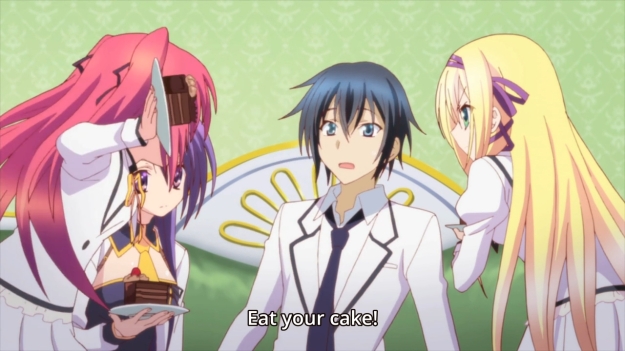 Yep, we are done. I haven’t decided how I want to cover next season’s five or six harem shows. With so many of them, maybe we can actually have a decent contest to decide the season’s shittiest harem anime. But shrug, I’ll figure that all out when the time comes. In the meantime, here are your damn tsundere sharks: 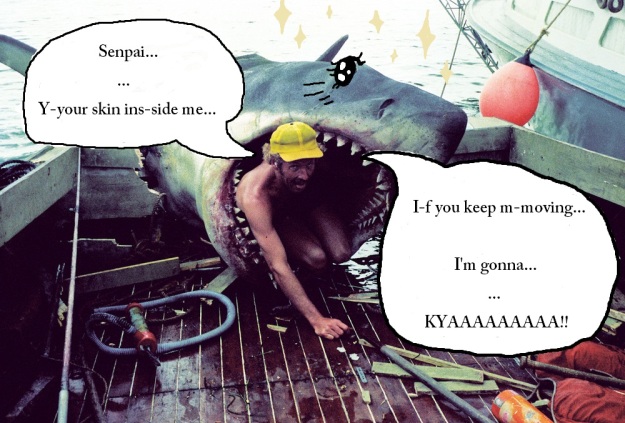