I know it’s a thing to say that anime is getting worse with every year, but I honestly don’t think the fall season is all that bad. Nothing so far has really gotten my mind going, but overall, there are more enjoyable shows to watch than in previous seasons.

— Shingeki no Bahamut: Genesis took first place with 30% of the votes. But which lead are we talking about? Favaro or Amira? Or perhaps even both! Favaro has some detractors, but I enjoy his laid back, rogue personality. It’s a nice change-of-pace from the hero of justice we so often see. As for Amira, I wasn’t too keen on her cutesy moments, but it was just for one episode. Plus, those same cutesy moments seem to have impressed others. As a result, I’m not surprised the anime finished on top of last week’s poll.

— Psycho-Pass 2 grabbed second with 15% of the votes. Akane seems to have mostly returned to her normal self for the sequel, barring a few small and perhaps not-so-small changes. I just enjoy the fact that she’s not as wide-eyed as she used to be. Early on in season one, I just didn’t understand why the veterans constantly needed to lecture the girl even though she supposedly graduated at the top of her class. Needless to say, removing all of those veterans — and relegating Ginoza to the sidelines — has allowed Akane to come into her own. That’s why it’s such a pity that Shinya hasn’t shown up yet. I’d like to see what their relationship dynamics would be like now that the girl isn’t a portrayed as a naive, fresh-faced rookie.

— In third place, we have Parasyte with 10% of the vote. I can’t honestly tell if I like Shinichi yet, though. It’s too early, and he hasn’t exhibited much of a personality other than the usual strong penchant for justice. Migi, on the other hand, is amusing as hell, so Parasyte probably deserves to be this high just for that.

— Garo: The Carved Seal slid in at fourth with 8% of the votes. Although Leon doesn’t bother me, I can’t say he’s impressed me all too much as a character. He looks cool as the Golden Knight, but outside of his armor, Leon still needs to come into his own. At the moment, he’s just a brooding, young man, and those are a dime a dozen. As a result, I have to wonder if some people voted instead for his father German.

— Amagi Brilliant Park also got 5% of the votes, but in raw numbers, it got slightly less than Fate/stay night. Well, Kanye West comes from a long line of KyoAni’s tried-and-tested sarcastic male leads, so I’m not too surprised the show did moderately well in last week’s poll. When you surround him with a bunch of annoyingly prideful mascots and ditzy girls, Kanye starts to look like an oasis in a sea of stupidity. That’s probably why I think Fiddy Cent is the most likely candidate for romance should one ever rear its ugly head. Not only has he already seen her naked, but of the female cast members, she’s the only one who doesn’t seem like an airhead. 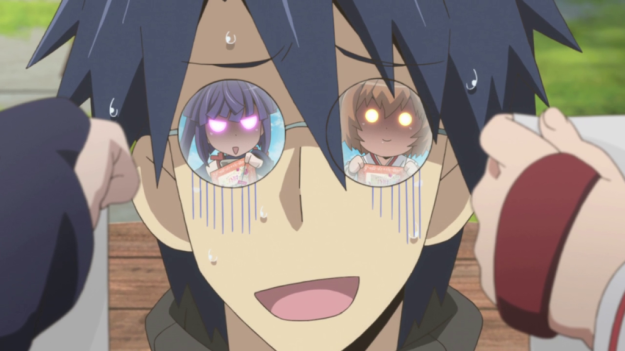 — Ten people — probably not the same ten — aren’t turned off by Akatsuki no Yona‘s spoiled princess. But hey, at least she’ll now change and grow up, right?

— Nine people see something in Gugure! Kokkuri-san, but I refuse to watch that show.

— Once again, Gundam: G no Reconguista loses to its prettier sibling Gundam Build Fighters Try. Neither show got too many votes, though. 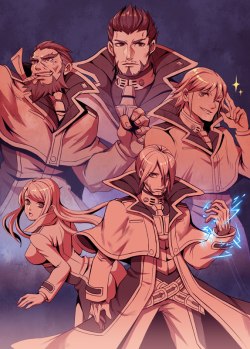 What’s the best way to describe the last episode? A shitty faux documentary masquerading as a shounen anime.

The show had one job: give us a single thrilling fight scene. In 23 minutes, it simply had to deliver one. One. It failed.

Uh, the battle scenes aren’t half bad? That’s all I’ve got. Everything else about the show is trashy. Not to be outdone by a harem anime, Ange even manages to piss herself onscreen. Blah blah blah, people piss themselves when they’re scared. Sure, of course they do. But do I need to see it? No. People also shit their pants when they get scared. How come we don’t see that oh-so-natural reaction to fear, huh? It’s because most people can’t jerk off to a girl defecating herself? Aww, that’s too bad.

It’s boring as fuck, aimless, unfunny, and misogynistic. Wow! Why am I not surprised that this harem anime is also the only one to have people rally to its defenses? “S-Stop picking on Grisaia no Kajitsu! It’ll get better!” 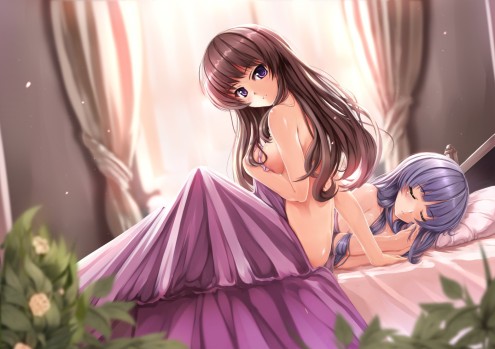 It’s boring as fuck, but somehow, the animation has actually managed to improve just a tiny bit.

Drip, drip, drip. But seriously, it’s boring as fuck, but at least it has a plot.

It’s boring as fuck, but at least nobody pissed themselves.

I could barely get through the episode. I’d say more, but I don’t want to risk falling asleep just thinking about what I had watched.

The story’s return to fantasy is a clumsy, exposition-filled mess. So essentially, it’s business as usual.

It feels like a slightly more clever Chuunibyou demo Koi ga Shitai. But but slightly less charming at the same time. I guess that’s the trade-off.

Every single scene in this anime is cloying.

We got a potentially fascinating breakdown from Tokimune in the second half of the episode. I like the way we couldn’t see Tokimune’s face whatsoever. Instead, the anime stayed fixated on his allies and their reactions to his breakdown. You could only hear his heavy, labored breathing in the background. If Tokimune’s VA was just a little stronger in his craft, the scene could’ve been outstanding. As it is, however, we get a thought-provoking set-up, but the execution was a bit lacking.

You could find this episode in 90% of the shoujo anime adaptations out there. The only difference is that the bishie here won’t just imply that he sees the heroine as nothing more than a dog. He’s a big enough asshole to come out and say it. 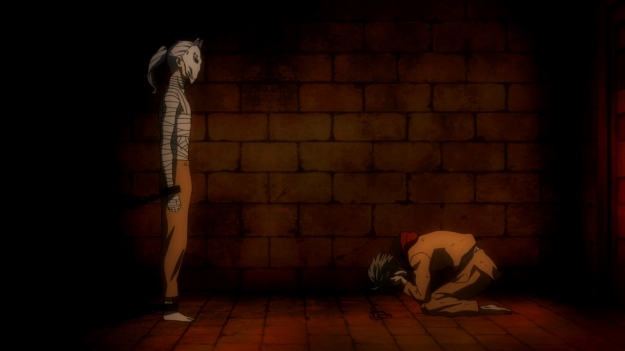 The show got a little more interesting now that we finally see what the lake prison is like. I’m not convinced that it’s hell on earth, but it’s lot more intriguing than the world on the outside. But as always, the characters are the show’s downfall. My problem with Tenka is that it’s so glaringly obvious that he could’ve taken his brother more seriously. Yeah, he’s not perfect, and we all make mistakes when we want to protect our loved ones. I don’t disagree with that. But you lose me a bit when you act the way Tenka did at the start of the episode. You almost want to knock some sense into him. As a result, Sora ending up in the prison feels a bit forced.

Last week’s episode was too predictable. I’m not just talking about the battle. Every single thing about it was dreadfully, utterly predictable. I rolled my eyes so hard when Sekai’s hot-as-hell sister personally visited his class to bring him his bento.

Yeah, the battle between the two armies ended up being a letdown, which surprised nobody, I’m sure. Still, it’s only up here because there’s a precipitous drop in quality for the shows beneath it.

Way too much exposition. Necessary or not, it doesn’t change the fact that I was bored out of my mind. I mean, a vaccine shot might save my life, but I’m not going to pretend that I enjoyed it. Whether or not all this early exposition was truly necessary, however, remains to be seen.

Yeah, it has way too much exposition. It’s just lucky it doesn’t have annoying fans desperate to defend it at all costs. Y’know, like some shows out there…

The show is interesting enough to watch, but instantly forgettable once it’s over. The story just hasn’t convinced me to care for any of its characters.

The show’s retro feel still doesn’t do anything for me, but at least the plot is finally taking shape. Unfortunately, Raraiya’s presence still continues to drag everything around it down.

The story needs to pick it up a bit. We got two flashbacks and nothing else. That’s not good enough. It’s fine to have Korean-sounding names, but let’s not start emulating the languishing pace one might expect to find in a typical Korean drama.

I don’t love the show, but you could do a whole lot worse. I still think that the drama feels manufactured, though.

There was nothing wrong with last week’s episode. I just enjoyed the shows above it more. That’s a good thing, too. I rather like how the fall season is shaping up.

It’s still one of my top anime. I just don’t have anything particularly insightful to say about last week’s episode. I’ll try to get my head back into the game for future episodes.

The show has a good mix of light horror and oddball humor. 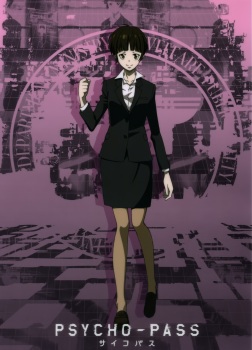 The sequel may have one or two too many characters for my liking, but I’m impressed by the current pace of the storytelling. I realize it’s only going to get eleven episodes, but still, we’re not wasting time.

Other than the undead loli necromancer, I have no problems with the most recent episode. Hell, it even got me to sympathize a bit with Kaisar, a character who I haven’t particularly cared for in the first two weeks.