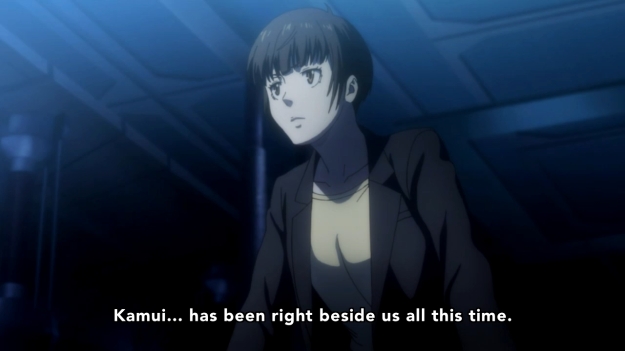 — People are still playing that game, apparently. Of course, there are sick individuals in the world who just want to hurt others, but these perpetrators are newly-minted, if you will. They are the results of the recent rise in elevated stress level. I just don’t see the causal connection between elevated stress levels and directly harming people. Plus, why would you be this stupid? Even if you wanted to hurt people, why would you openly play a game that can be easily tracked?

— Saiga: “Transplanting a lot of one’s organs is like transplanting one’s Psycho-Pass.” That’s an odd thing to say. I kind of wanted Saiga to explain his logic, but I guess the anime felt like it has spelled everything else out enough. On a related note, he’s not really trying to interrogate or pump the representative for information whatsoever. He’s just talking to the audience. I don’t really like scenes like this one because they’re disingenuous.

— It is now nighttime, but Akane is still standing on that ledge. Unless she came back for some odd reason, she literally just stood there for hours. She then complains that she couldn’t shoot. Then why didn’t she let Sakuya shoot the gun? Is it because she cares about him the same way she cares about Shinya? I hope not. Sakuya hasn’t really done a goddamn thing to justify that sort of treatment. But if it’s not that, then why? This is especially bizarre because it sounds like she wanted to take the shot herself.

— By the way, Sakuya is right. They did come face-to-face with their ghost, a.k.a. Kamui. What say you now, Mika? Ginoza? Every goddamn person who has doubted Akane even though it was fairly obvious that technology wasn’t infallible?

— Akane: “Who on earth are you trying to point those Dominators at?” Is that really the pertinent question? How about… “Why are these Dominators still operational?” Or how about “Even if the members of the MWPSB have high readings, why are you allowing the Dominators to fire?” More importantly, why is nobody asking those questions? Why is nobody questioning the fact that the Sibyl System isn’t playing a large enough of a role in stopping this madman? The Sibyl System is doing nothing but sitting back and throwing its hands up in defeat. All I can do is scan for people’s Psycho-Pass! A bloo bloo bloo… all I can do…. is scan! ;;

— Shinya pops out of Akane’s imagination to help her through these tough times. She then snaps back to reality, and realizes that Shinya’s words were actually Sakuya’s. I wanted Shinya to be involved in this story somehow, but not like this, man… not like this. It’s fairly obvious that Sakuya is supposed to be this twisted subversion of the former Enforcer, but it doesn’t work. We hardly know anything about the guy other than that he’s a creep, and he’s aping Shinya’s actions. We spent two-cours with Shinya. We’ve only spent six episodes with Sakuya. Not only that, it was revealed rather early on that he’s up to no good. So not only does the audience not find him credible, the audience doesn’t find Akane’s reliance on him credible either.

— Maybe the answer is just that literal. Maybe Kamui’s color is clear because he’s hiding behind other people’s organs as Saiga had suggested. In other words, he’s this dystopian world’s version of a zombie. He’s dead to scanners for all intents and purposes. That would explain why these same scanners can’t recognize or detect him. But why can’t the Dominator scan his brain, which, presumably, he can’t replace with a transplant? I doubt having a new face would somehow help him avoid this problem.

— Saiga: “As long as Sibyl continues to recognize [Shisui’s] actions as valid, those Dominators will continue to be used.” Oh, so we do acknowledge this… so is anyone going to bring this fact up with Kasei?

— But just look at this:

Shion: “Hey, is that sarcasm towards Sibyl?”
Saiga: “No, it’s suspicion.”
Shion: “That’s even worse.”

God is unquestionable. You can’t even joke about God.

— Oh look, Ginoza’s onscreen. Let’s see what he has to contribu–…

Ginoza: “Tsunemori, you should rest a bit.”

Oh, right. He’s a robot these days. He can’t say anything but a handful of lines over and over.

— Ginoza is exasperated at the fact that Akane hasn’t moved from her apartment yet. I’m sure Sakuya is delighted about this, because he thinks this will make it easier to corrupt her. Do you get the feeling Shinya will just show up at the last minute and save Akane?

— The very brief conversation between Akane and her grandmother feels stilted. It doesn’t feel like two loved ones catching up. Instead, her grandmother is basically telling her what to do next in the story. Epiphanies every time I talk to my grandma! Ahhhhhhh, this writing, man.

— Finally, we ask Kasei some very important questions. And of course, her answer is completely stupid! Shisui’s Psycho-Pass is still clear so there’s no reason to disable her access to the Dominators! Genius! Air-tight logic! We can’t make exceptions! Akane deduces that the Sibyl System just doesn’t want to appear flawed, i.e. it is incapable of handling the current situation. So let me get this straight. A group of super-intelligent brains would rather preserve its reputation in the short-term over stopping a madman who is very carefully and very deliberately causing people’s faith in the Sibyl System to erode? Does that make sense to any of you? It doesn’t make sense to me. I’d rather swallow a bitter pill and stop Kamui dead in his tracks instead of letting him run around and cause mayhem. But hey, that’s just me! I’m certainly not a writer who’s attempting to put himself in the shoes of a group of super-intelligent brains.

— But everyone’s stupid! It’s not just the Sibyl System! Akane wants to know how they can stop Kamui if the scanners won’t even recognize him?

Kasei: “It’s simple. In fact, you tried to do it, right?”
Akane: “Are you saying that killing him is appropriate?”

Of course it is! Look how many people he has killed! His aim isn’t just to commit crime. He’s not just your bread-and-butter serial killer. His aim is to bring down society altogether. 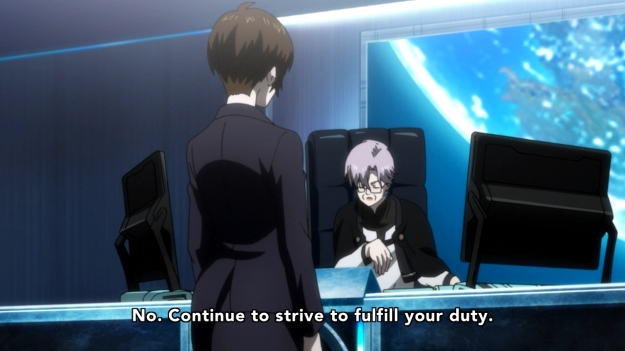 — Like Makishima, this guy is a terrorist. Does he deserve a fair trial? No! But there’s no such thing as a fair trial in this world anyway. Who lives and who dies are completely dependent on the Sibyl System’s judgement. But that’s the problem, isn’t it? These characters are so used to having the Sibyl System judge everyone that they can’t even entertain the idea of passing those same judgement themselves. That’s why Shinya was a hero. He had the guts to judge Makishima, especially since the Sibyl System wasn’t going to do so. No, you shouldn’t go on a rampage and judge every single person out there, deciding whether or not they get to live. But when there are clear-cut cases like Makishima or Kamui, you shouldn’t hesitate and let these assholes kill more people. What is wrong with you!

— Akane: “…we’ll arrest him and bring him to rightful justice.” Sigh. What is justice? The longer Kamui is on the loose, the more people he will hurt. No amount of “rightful” justice will undo the pain and suffering that he has caused or will cause because Akane allowed him to get away in last week’s episode. I know her grandma said that people’s lives are valuable, but I don’t think someone like Kamui is what the old lady had in mind.

— Mika learns that everyone who has worked with Sakuya ends up becoming a latent criminal. Why is he allowed to work for the MWPSB again? I guess we won’t find out until much later. I laughed at Mika being so spooked that she would toss her drink away over a phone ring.

— According to our crack team, Kamui “has an extraordinary knowledge of drugs.” So not only is he a master of psychiatry, he’s a proper surgeon because he can remove your organs without damaging them, he’s a master at holograms, he can hack into incredibly secure networks, he can program a game that somehow translates action in the real world to gameplay that you see on screen, and… oh, of course, he “has extraordinary knowledge of drugs.” Welp. At this point, what can’t he do? 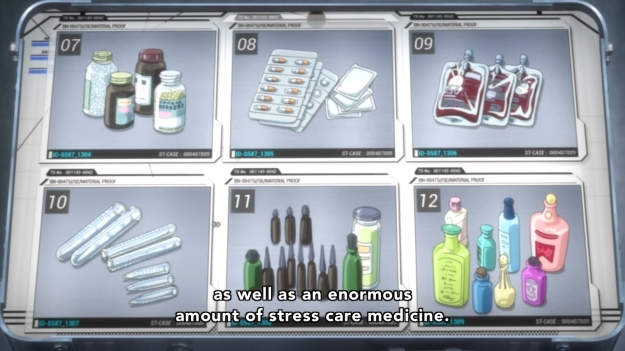 — Can he salvage this sequel?

— Aaaaand in the middle of an investigation, Mika throws a tantrum.

— All of Kamui’s holograms appear to be aged versions of kids who had died on some plane crash. But then the one survivor is… dun dun dun! Kirito Kamui! But if he’s this smart, he would never leave such an obvious clue behind. Obviously, he wanted our investigators to figure this out. The only question, then, is to what end?

— Magically, however, our investigators can’t even access Kamui’s records. They can talk to his surgeon, but not surprisingly, this guy is also a devoted follower of Kamui.

— I don’t think I’m a big fan of Sho’s characterization, especially the whole “big sis” thing. It’s just cringeworthy. Because this season is too short to really develop any of these characters, all the writer can do is distinguish them by giving them very obvious traits. Mika’s a giant baby, Sho stutters a lot, Ginoza just doubts Akane, so on and so forth. It makes for a cast of characters that are difficult to relate to.

— Then we get a reminder that Shion and Yayoi are still a thing. Okay. Yayoi is barely in this sequel, but at least we know these two lesbians are getting it on! There’s no other way to show that they’re lesbians either.

— The Togane Foundation is then linked to the doctor that Akane has just taken in. Man, I think the new writer is too concerned with spinning a web of conspiracy instead of just writing a proper story. 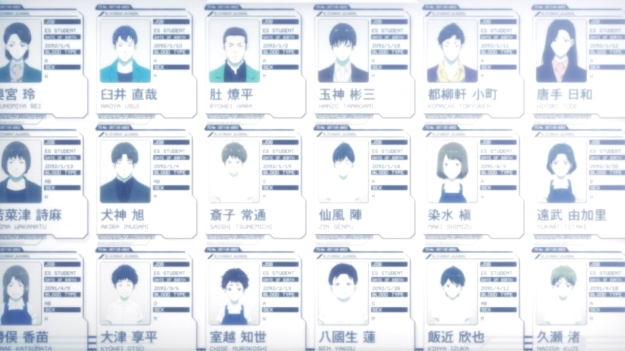 — After Sho finishes aging up all the holograms, our heroes realize that they’ve been interacting with Kamui this entire time! But the audience already knew this from the get-go. Hell, I said this back in week two:

According to Kitazawa, his accomplice had come to see him and made his color clear. Risa instantly believes that this is a lie, because the only person to visit Kitazawa recently was a therapist. Considering what we had just learned about holograms, however, I can’t help but think our villain had disguised himself as a therapist, then made his way to Kitazawa to clear the guy’s color. The problem, however, is that the therapist himself claims that he had talked to Kitazawa. But how do we know that the therapist in front of Akane is actually the real therapist? What if the real therapist had been killed a long time ago, and they’re actually talking to the bad guy?

So the big reveal is a giant letdown. The sequel isn’t as clever as it wants to be.