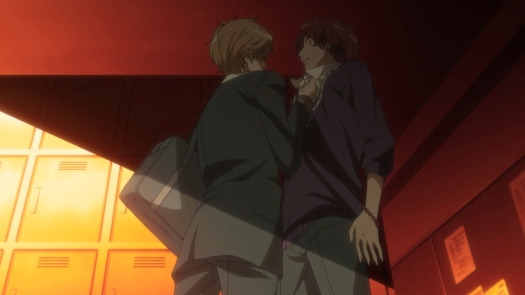 Didn’t Kyouya confess to Erika at the end of last week’s episode? So what is possibly left for us to see? Well, I guess we’ll soon find out.

— Erika and Kyouya are finally on a date — a date to see flowers. Honestly, that sounds boring as hell. The guy doesn’t want to go, however, because he hates crowds. He probably just hates people in general. Still, you make reasonable sacrifices for the person you like/love. It wouldn’t kill me to see flowers if my girlfriend actually wanted to. Thankfully, she doesn’t.

— She’s pleased, but this is just the bare requirements of, y’know, an actual relationship. It’s crazy how much we’ll lower the bar for the person we like, though.

— A guy with a harem walks past our oh-so-lovely couple. The girls in the harem immediately start to praise Kyouya’s looks and shit-talk Erika’s. Sure, mean girls exist. But have you noticed how every single female character in this anime — aside from Ayumi, of course — is incredibly shallow? This isn’t just unique to Ookami Shoujo to Kuro Ouji either. I’ve noticed this before in other series. If you’re not friends with the heroine, you’ll often be portrayed as a class A bitch. And in Ookami Shoujo to Kuro Ouji, even if you are friends with the heroine, you’re still portrayed as a class A bitch. These adaptations are ostensibly aimed at girls, and yet, they have such a negative outlook on one entire half of the world’s population. It’s astounding.

— What’s with the introduction of this character? Is he going to try and NTR Erika or what? Even better, maybe he wants to NTR Kyouya. That’s how sad it is, though. If a new character appears, we don’t think, “Oh, what is this person going to be like?” Instead, we’re conditioned to think they’re going to stir shit up.

— Shit, he can’t even stand to eat gelato. It’s gelato, man. It’s about as inoffensive as you can get unless you’re lactose intolerant. She ain’t force-feeding you durian. Holy shit, just buy a 200 yen gelato in a non-sweet flavor like coffee and deal with it.

— He’s basically saying, “I love you… but doing anything with you sucks ass.” That’s how far we’ve come since the first episode. But she knew what she was getting into. It’s hard to feel sorry for her.

— So our “couple” proceeds to have an argument in the middle of a public space. Awkward.

— But again, he threatens to break up with her. That’s pretty emotionally abusive. As long as he knows she can’t get over him, he’ll just dangle that bullshit over her head every time they have a disagreement.

— Normally, after an argument like that, you’d just expect the couple to break up. Or at least end their date. Not Erika, though! Instead, she comes right back to Kyouya and requests that they enjoy some delicious takoyaki. Can’t have an anime series without those golden balls!

— Then she just gives in: “Listen… next time we have a date, let’s watch a DVD you like.” Oh man, talk about pathetic. Her reasoning: “…even if I want to do something, it’s no fun if you don’t.” Sure, that’s true. But she hasn’t made any outrageous requests. He acts like it would kill him to hold hands or ride a rowboat when, at best, he’d just be slightly uncomfortable. I mean, don’t get things mixed up. You shouldn’t have to do anything you absolutely don’t want to do. But if you tell me you absolutely don’t want to hold your girlfriend’s hands, I’m going to have to say you need help.

— She even blames herself.

— And of course, the Stockholm syndrome sets in. This is Erika’s conclusion after having to humiliate herself by riding a couple’s rowboat all by her lonesome. She basically sat there and stewed in her sadness until she ultimately decided to blame herself for everything. Oh man.

— Seeing his girlfriend beat herself up like this, the merciful Kyouya simply turns to Erika and opens his mouth. Mystified, she asks him what he wants. He thus gets angry with her for not realizing that she should be hand-feeding him golden balls. Hilarious. I mean, how was she supposed to know what to do? After all, he’s turned down every previous attempt to be romantic.

— The sad thing is, there’s no irony in this. It might have been somewhat subversive if this was what Erika had planned all along, i.e. just a little reverse psychology to get this simpleton to come around. But no, she’s genuinely shocked and concerned that he actually wants to be hand-fed. Uguu, a-are you sure you won’t mind? A-are you sure you won’t yell at me?!

— This is supposed to be a romantic moment! This is Erika’s prize for admitting defeat!

— Kyouya then walks away all happy and shit, so we’re supposed to sit there and think, “Awww, he liked it!” But we know better.

— Good friends. As always, these two girls are good friends… What are they mad about? The fact that Erika and Kyouya are in the same class for their second year of high school. What? You expect friends to be happy for each other? Pfft…

— The pretty boys stare each other down. Pretty boy cat fight incoming?!

— And already, the new guy is going for Erika. He doesn’t really care about her, though. He just doesn’t want to lose to Kyouya, because he thinks they’re both harem leads. No, seriously. And instead of just having a simple cock-measuring contest, I guess Nozomi’s idea of fun is to try and break the couple up. 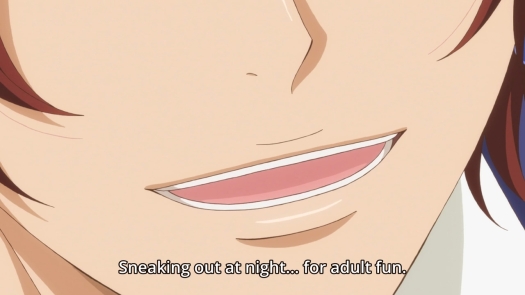 — There’s not much to talk about with the new character. He just boringly throws himself at Erika. They’re stuck doing some committee work together after school, but meh… He tries to sell her on the merits of dating more than one person at a time, but it’s all just self-serving playboy stuff.

— He eventually learns that Erika and Kyouya are dating, and for some odd reason, this really, really surprises him. I thought he already knew that. I guess he’s surprised because he thought Kyouya was a playboy like himself.

— When the two of them are finally done and ready to leave the school, Erika finds that Kyouya has been waiting for her by the shoe lockers. She thinks he’s done this out of the goodness of his heart. I bet he’s just possessive and afraid that Nozomi might steal his girl. This doesn’t stop Nozomi from staring slack-jawed at Kyouya, though. He gawks at the guy as if the Black Prince is really some sort of mythical unicorn.

— Erika realizes that she’s left something behind and thus runs off to fetch it, thereby leaving Kyouya and Nozomi to be alone with each other. The latter takes this opportunity to express astonishment at the fact that our Black Prince is exclusively dating Erika: “No way! Why? It’s such a waste!” Wow, this guy really cares about Kyouya’s love life!

— Nozomi: “You should rethink it. Sata, you’re not the type to stick with one woman.” Dude, how is this any of your business? 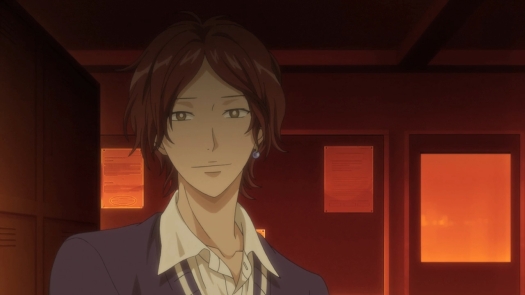 — As Kyouya and Erika walk off together, Nozomi creepily says to himself, “I’ll need to open his eyes soon.” Can you actually imagine someone like that? I won’t let you down, bro. I won’t let you waste your potential! I’ll make sure you stick your playboy dick in as many girls as possible!

— Of all the ways the story could’ve injected drama into our couple’s relationship, this is the path the anime ultimately chooses. I mean, the moral of the story is obvious enough. Even though Nozomi is a playboy, deep down inside, he knows it’s wrong. So to see Kyouya date someone exclusively, Nozomi reads this as an indictment against his own personal choices in life. It’s like when you jealously encourage your friend to eat a lot of food with you even though you know you both need to diet. 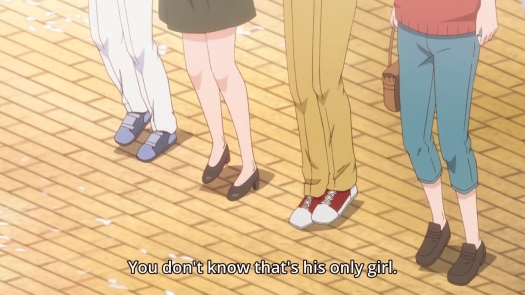 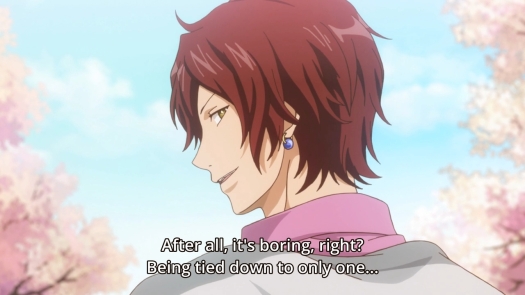 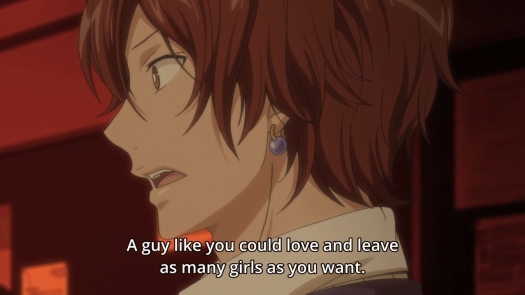