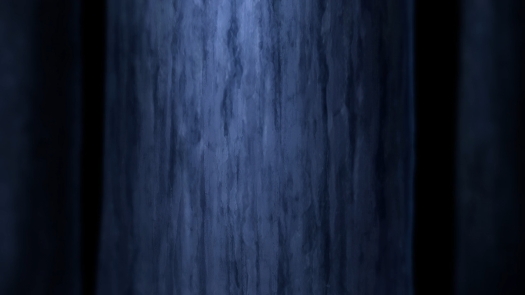 Has anyone ever tried to tell you his or her sob story, and you say, “No, I’m not interested,” but they end up just telling it anyways? Yeah, it’s kinda like that. Then when it’s all done, you’re left standing there with all this useless information stuck in your head, and you can’t help but think to yourself, “Man, what am I supposed to do with this?”

Obviously, there isn’t a giant penguin stalking Mitsumune. Sorry to disappoint anyone who thought otherwise, but our “hero” is just tripping. And he ain’t the only one.

Thanks to Masaki’s fire (that is somehow rigged to not spread despite our characters being stuck in a densely forested area), Lovepon finds herself separated from the rest of the group. 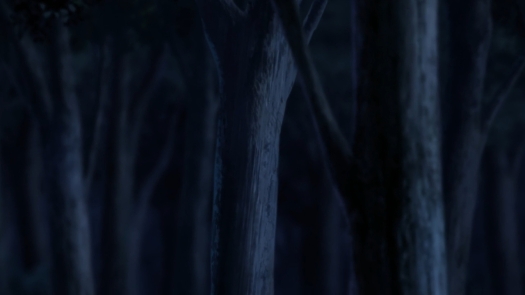 She starts staring at a tree and tripping balls. The thing for me is that I don’t give a damn about Lovepon. I never have, and I never will. I just want her to go away. Her character is annoying, her “Execute!” catchphrase is annoying, and she lends nothing to the show. Ah, but what if I told you her… sob story?

Apparently, her mother was in a lot of debt, so they had to depend on some shady monk. The monk abused them physically, and probably abused the mom sexually. As insensitive as this might sound… so what? First off, let’s brush the black comedy angle aside, because I don’t see anything funny about some old man preying upon a mother and her child. If you laughed at any of these scenes, then I don’t really want to know you. 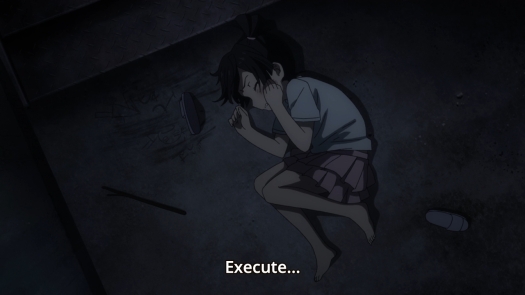 More importantly, my opinion of a shitty character isn’t going to change just because you tack some sad backstory to her past. It’s such a dumb and cheap narrative move on the writer’s part. Like any of this somehow justifies Lovepon’s existence. What, am I’m supposed to sit here and think, “Oh, so that’s why she’s a shitty character who says “Execute!” over and over. Man, have I got an egg on my face or what!”

Actually, I should try doing the same. Whoa, you don’t like my Mary Sue? Well, guess what? Her grandma made her drink hydrochloric acid everyday! Yeah, you didn’t know that, didja? Maybe now you’ll think twice before writing a character off! 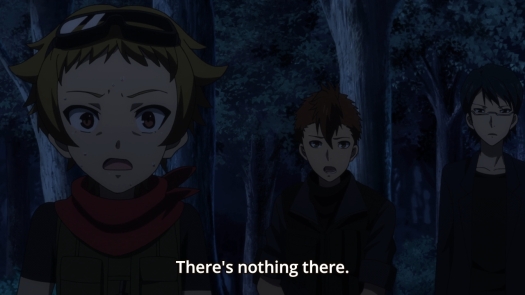 Unfortunately, the episode bets the house on this tactic. Not only do we learn about Lovepon’s trauma, we get to see Nyanta’s sad story as well. Long story short, she used to be bullied by some of her peers. She bought a toy gun to bully them back, but they caught her and traumatized her with some bees or wasps or whatever. Hey, I’m no insect expert. Again, the sob story doesn’t make me give a shit about Nyanta. I’m just bored, actually.

As the giant bee is chasing Nyanta through the forest, I couldn’t help but think of that infamous Nick Cage scene. Oh, you know the one. In fact, I bet you anything plenty of people have already posted a link to this scene as a result of this week’s Mayoiga, but meh, The Wicker Man is legitimately one of those “It’s so bad, it’s actually good” movies. As a result, the infamous scene deserves to be posted yet again:

Next, we are forced to learn about… about… fuck, what is this guy’s name? According to the internet, it is Jigoku no Goka. Riiiiight.

Anyways, this is really stupid, but I may as well get it over with: he was too short for the military, so he got breast implants in his head…? 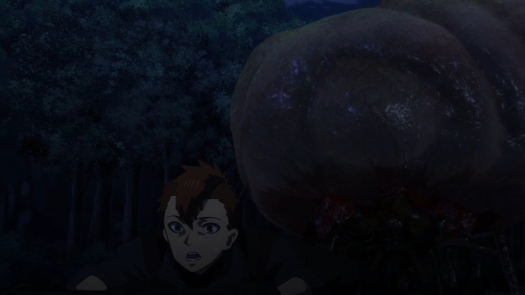 As a result, he’s being chase by some weird silicone monster. To the show’s credit, however, Jigoku no Goka’s section of the episode does have the one scene that actually made me laugh:

Finally, we get to Mikage. He’s got the most boring story out of all of them. 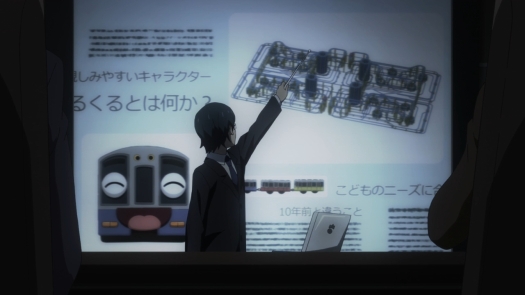 He promised his company they’d have some toy train demo ready for a big convention, but he screwed up on the dates, so he ended up embarrassing both himself and the people he worked for. They started laughing at him, so now… 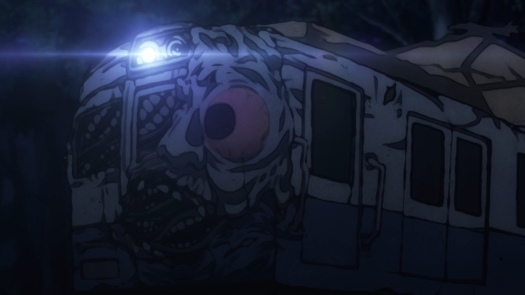 …he’s being chased by a laughing train. Yawn. The sixth episode of Mayoiga basically gives us a bunch of answers we never really wanted. Here are some terribly written characters, and here are their equally terribly written backstories. Woo.

The best part is really all the extended close-ups of the trees in the forest. Those trees have got to be emitting some kind of airborne LSD-like drug. Meanwhile, the rest of the group convenes to tell more scary stories in the dark~ 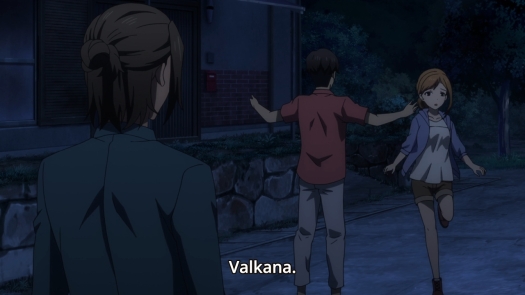 We get a couple semi-amusing bits as a result. First, our tour guide continues to humiliate himself. 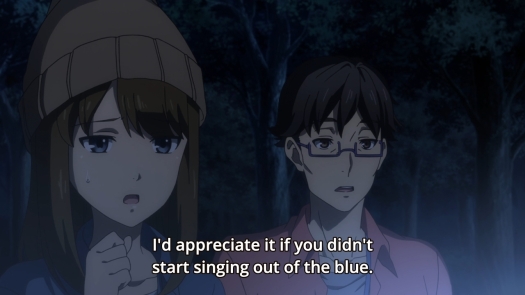 Then, some girl (I’ll look up her name later when we get around to her sob story) says what we’re all thinking. But neither of these moments are enough to really justify Mayoiga’s existence. I mean, if you gotta watch an entire episode for three weak jokes, then that’s pretty sad.

Anyway, the group hastily comes to the conclusion that everyone must be having a mass hallucination. I mean, it is the likeliest explanation, but it’s also kind of lame at the same time. I would’ve preferred seeing how they could justify the existence of a giant penguin in the forest, but at the end of the day, we’ll just have to go with the bad acid trip route. The group then tacks on some cheesy revelation about how the village helps you find your true self by unearthing your deepest, darkest secrets. Or something to that effect. Shrug… Wait, come back! Even though everyone’s just tripping, there’s still something supernatural about this story!

Y’see, Masaki is really a girl who disappeared a long time ago. DUN DUN D–… hey, where did everybody go?