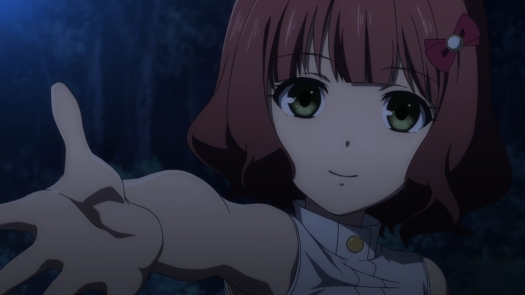 I wish this anime was unintentionally funny. I really, really do, but then it’d at least be entertaining on some level. But we can’t have nice things, so Mayoiga isn’t funny in any sense of the word. It isn’t intentionally funny, unintentionally funny, horrifically funny, spiritually funny, religiously funny, or even ecumenically funny. I think we just want to convince ourselves that both the portrayal and the witnessing of abject stupidity are somehow worthwhile endeavors. That it’s somehow amusing to laugh at these shitty, emotionally retarded characters. It’s as if I’m supposed to take some kind of perverse delight in watching idiots do idiotic things. Not only that, I’m also supposed to applaud Mayoiga for being self-aware of its characters’ ridiculous mental ineptitude. After all, the anime can’t stop beating me over the head with the fact that it’s in the know. Dude in the hat dumbly asserts that blaming everything on a ghost makes for a pretty convincing argument. Mikage goes from “Masaki is a ghost” to “Masaki is trying to take us all with her.” He then asks, “That’s a reasonable conclusion to draw, isn’t it?” As the riled up mob cries for Masaki’s blood, Dahara remarks on the childishness of the situation, but of course, does nothing about it. Mikage then insists that everyone’s insecurities will go away by somehow killing a ghost. So over and over again, Mayoiga puts its characters’ stupidity on display, and for what?

In fact, it’s a cop-out. Mayoiga is using our cynicism as a bludgeon to force this terribly written story down our throats. Since the world is so stupid, then the characters can be stupid too. As a result, we trot out these insipid stereotypes and cliched characters, i.e. Mayoiga’s entire cast.  Since these characters are dumb, they also don’t need proper character development. This is, in effect, what we’ve gotten over the past seven episodes. Case in point, Mari Okada boldly squeezed four characters’ backstory into last week’s episode. As the episode wore on, the backstories just got lazier and lazier. I may not always enjoy her writing, but she’s been in this business long enough to know that you don’t commit this sort of storytelling crime by accident anymore. You only get away with this sort of shoddy character development, because none was needed in the first place. She knows that most of us aren’t here to learn about the characters’ pasts in good faith. We’ve already written Lovepon off. No tragic backstory is going to endear most of us to her character. Like the rest, we’re just here to laugh at her. So that’s what we get: four incredibly shitty and pathetic backstories. For fuck’s sake, one guy literally thinks he’s being chased by a boob. Naturally, the audience laughs because look how stupid this is! He’s being chased by a boob, because he got silicone implanted on his head! Can you believe such a thing? But that’s the point: this is only entertaining ’cause we’re cynical as fuck.

Ah yes, human nature is so deplorable. Look at how these fools drag themselves into the middle of nowhere simply because they can’t face up to their real world responsibilities. Now look at them turn on each other just to protect themselves from their own insecurities. In that case, Mari Okada is simply mimicking the shallow badness of our times! We withdraw from society, because we are cowards, then to further our cowardice, we scapegoat an innocent person to assuage our fears. Ah, such insight! But enough sarcasm. What am I trying to get at? When real life is supposedly so bad, fiction should actually be trying to locate the good. Even if it’s just a tiny glimmer of hope, we should try to find it, try to cherish it, and try to nurture it. You certainly see this in Cormac McCarthy’s novels. No matter how dark the world gets, you have to carry the flame. You don’t give up. In Mayoiga, I guess our flame of hope is supposed to be Mitsumune. After all, Masaki praises his compassion, his kindness, the warmth of his hands, and all that jazz. All he needs, she claims, is faith in himself, and he’ll be able to succeed in life. Our hero is, therefore, the counterbalance to all the stupidity surrounding him. In theory, anyways. Unfortunately, Mitsumune is also one of these insipid characters, so how is this supposed to work? Look, had Mitsumune been the Japanese analogue to Prince Myshkin, then we’d have something to work with. Unfortunately, he’s just as dumb and pathetic as the rest of the group. I’ll expound on this in a bit.

But first, we must address Mitsumune’s past. There’s no doppelganger or anything of that sort, but maybe he’s still dead if we assume Lion is remotely reliable whatsoever. At the moment, I personally don’t, but whatever. We’ll find out soon enough since we’re already up to the seventh episode of the series. So back to Mitsumune, he was the obedient brother. On the other hand, Tokimune was the rowdy, reckless one. As a result, their mother doted on Tokimune, because he’s the one that, well, you would have concerns about. The obedient child won’t get hurt. The obedient child will be studious. The obedient child won’t get in trouble. On the other hand, you can assume the opposite for Tokimune. You can, therefore, understand why their mother paid more attention to Mitsumune’s brother. To a young child, however, he just assumes she loved Tokimune more than she loved him. What happens next is that Tokimune was playing on a ledge when the mother freaked out, thereby causing him to fall and… well, I assume he died, but maybe that’s the plot twist. Maybe Mitsumune is really Tokimune!!! Okay, enough baseless speculation. The point is that the mother is now racked with guilt. To help his mother cope, Mitsumune had to pretend to be his brother. This continued all the way to high school. At this point, he just couldn’t take it anymore, so he ran away. 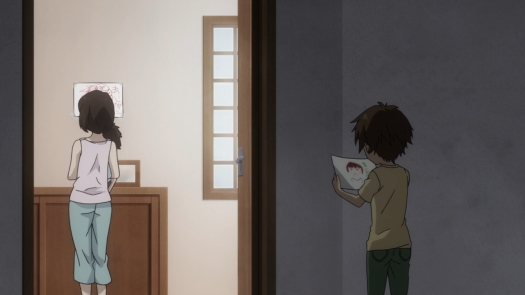 Does this explain everything about Mitsumune? Well, it does explain some of his quirks. For instance, you can reason that he falls in love with any girl who pays him the slightest bit of attention, because he craved his mom’s attention. Due to this, anytime a girl ever does anything nice for Mitsumune, she suddenly stirs up his need for maternal love. She may very well become a surrogate mother for the kid if only for a brief moment. At his age, it’s just easily for him to mistake this for a foolish crush or even a hormone-driven attraction. As I’ve said before, Mitsumune has a purpose in the overall narrative. If what I said above is correct, then he will eventually help everyone to redeem themselves or something to that effect. Nevertheless, I still feel that the execution here is terrible. Yes, Mitsumune’s selfless. Yes, he’s compassionate. But at times, he’s selfless to the point of stupidity. For instance, when he steadfastly defended Masaki regarding Yottsun’s disappearance even though the girl’s story was obviously full of holes. In cases like these, it’s hard to tell if he’s heroically selfless, or just selfless because Masaki is a cute girl. To be fair, he also defended Jack, but again, he did it in way that doesn’t inspire the audience. Rather, it just makes us laugh at him instead, which seems to defeat the purpose. What good is making Mitsumune this idealistic symbol of hope if he just continues to effect derision in the audience?

Back to the present, everyone manages to capture Masaki. She had gone through the tunnel earlier, but then she came back? Again, this is just Mayoiga withholding information from the audience to create a sense of mystery and suspense. We’ll find out later who or what she is, so I don’t want to spend too much time speculating about future plot developments. It’s just not very fruitful in my opinion. In any case, the group ties the girl up to wooden post, then proceed to torture her. Nothing seems to provide any credence to the idea that Masaki is a ghost, but the mob is too far gone. They want blood, and sure enough, that is what they get when Speedstar lightly cuts her arm with a knife. Oddly enough, it’s Speedster who has now gone off the deep end. He hasn’t been chased by any bizarre apparition yet. Rather, he’s fixated on the idea that his buddy needs him and can’t live without him. Perhaps Speedstar’s deepest fear is that he’ll no longer be able to play the role of his friend’s savior. After all, if Masaki had her way, then Mitsumune would be self-sufficient. Speedstar can’t have that, and he’s willing to kill Masaki if necessary. I only wish we had seen more of Speedstar up to this point. It would make his actions here a little less jarring. Then again, most people would unironically argue that being jarring is Mayoiga’s MO. Oh look, we’re almost out of the time. Masaki thus claims that she’ll now reveal the truth to everyone… only for the credits to start rolling. Welp. 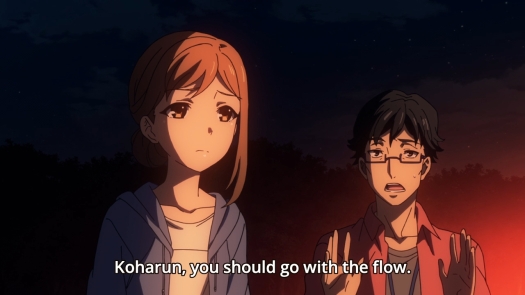 While this week’s episode has given me much to think about, I still think it’s a pretty subpar series for the reasons I’ve laid out above.