I guess it’s time to learn a thing or two about Honoka’s past. Strap yourselves in. It’s about to get misty in here.

— We see a flashback with Honoka and some empty-headed girl who nearly kills herself just to… prove a point? She wants to hammer home the idea that Honoka can’t get rid of her?

— It’s good to be honest with yourself.

— As I am watching the cold opening, it suddenly dawns on me that there is a very heavy emphasis on the female characters and their emotional woes. In comparison, Tenga, Yuta, and Hisomu seem to have gotten the short end of the stick. For instance, Hisomu’s need to feel physical pain is painted in a very joking manner. He’s treated as a pervert when he’s really a self-destructive individual who should receive more attention.

— And certainly, Katsuhira is the male lead, and therefore, he will receive a lot of character development. But his key defining characteristic is that he lacks emotions. So again, the show’s entire emotional burden lies with the girls. Is it because it’s just easier for the audience to sympathize with cute yet vulnerable girls? And is that fair to either of the sexes? 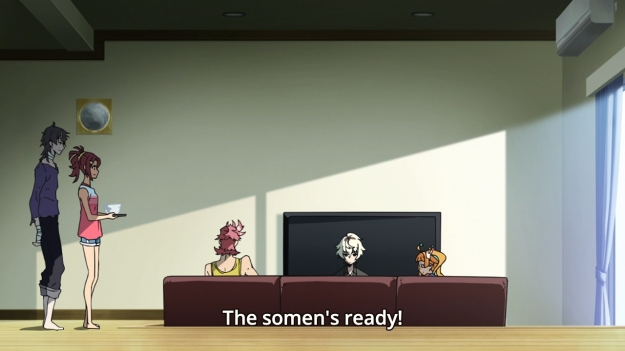 — For the most part, the character designs and their animation are pretty, but the backgrounds are very uninspiring. Lazy, even.

— I agree with Chidori here. I don’t know where the story is going with this Kizna thing yet, but Chidori’s right. Some feelings are not worth sharing. Some feelings should remain private, because feelings are impulsive. You can’t always control what you feel. For instance, let’s say my girlfriend tells me she’s having a girls’ night out, and I’m hurt. Logically, I know it’s no big deal for her to go out. It’s a good thing for her to see her friends, and it’s not healthy for couples to spend every waking moment together. That’s what I know in my head.

But in my heart, let’s say that it hurts. It hurts real bad. It’s selfish, but I can’t control that. I can only control what I choose to do about my feelings. If my girlfriend and I are stuck in the Kizna System, she’d instantly know that I am hurt. And you know what? Even if I tell her it’s okay for her to go out, just the fact that she knows I’m hurt will probably sour the rest of her night. Some feelings just aren’t worth sharing, and part of growing up is learning to recognize the ones that are worth communicating with our partners. I hope Kiznaiver doesn’t go hog wild with the idea that it’s a good thing for these “friends” to suddenly know every single time one of them is hurting.

— Well, what do you know? Hisomu is not an emotional masochist. 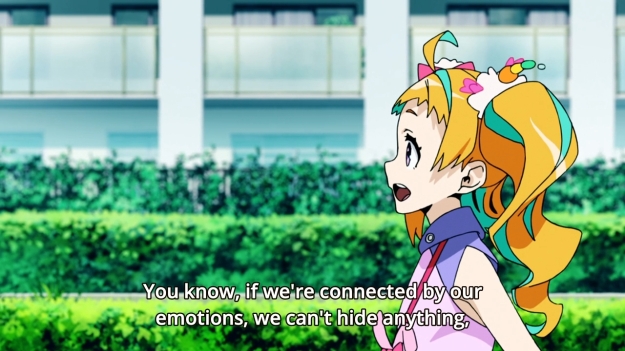 — Nico senses that Honoka is lonely, so she tries to walk home with the girl. She then uses some backwards logic to try and convince the latter that they’re friends. Friends share secrets with each other, right? And since their pain is shared, this must mean that they’re friends! But it’s like when your mom forces you to have play date with some kid you dislike. Yeah, friends share secrets with one another, but that’s after the friendship has already been formed.

In Kiznaiver, nobody is voluntarily sharing their pain. They’re forced to feel everyone’s pain, then they’re forced to do something about it. I’d be pretty salty in their shoes, i.e. “You only give a shit about me, because you have to.” As a result, the friendship between these seven individuals seems pretty inauthentic to me. It’s forced. It’s phony.

— I want to give the anime the benefit of the doubt. I want to think Okada’s message isn’t this one dimensional. But just earlier in the episode, Tenga observes that Honoka isn’t honest about her feelings. She acts as if she’s annoyed by the group, and yet, she always shows up when they invite her to gatherings. Likewise, the whole friendship spiel is coming from Nico, the one person in the group who I would least suspect of having ill-intentions. So maybe Kiznaiver really does believe that these unlucky seven can somehow become best friends just because they are forced to share their deepest, darkest feelings.

— As the weeks go by, I’m losing any hope that the Kizna System will lead to anything compelling. Noriko meets with the mayor, and she is told that investors are pulling out. They’re also getting bad press. It’s such a short scene, however, and the episode goes right back to our seven teenagers and their teenage problems.

— It turns out Honoka and her friend penned some manga that became an overnight sensation due to the fact that it was written by two middle school girls. From the sounds of it, the premise of the manga does not sound very appealing. A high school girl falling in love with her teacher? Ugh. But that’s not really relevant to our story, so I’ll just leave it at that.

— It’s certain at this point that Honoka didn’t kill anyone. We still don’t know what happened to her friend yet, but Honoka just feels really, really guilty about it on an emotional level. Well, like Yuta said, she’s not in jail so this is arguably obvious from the get-go, but hey, you never know with anime. Still, Honoka’s past was the one thing about Kiznaiver that I found potentially interesting. And now that we’re slowly peeling back the layers, I just want to glue them back on.

— Honoka wants the past to remain in the past, but some studio wants to adapt the manga into a film. Worse yet, they want to do a documentary on the creators of the manga. I have a lot more to say about this, but we’ll get to it soon enough. Hold on to your butts. 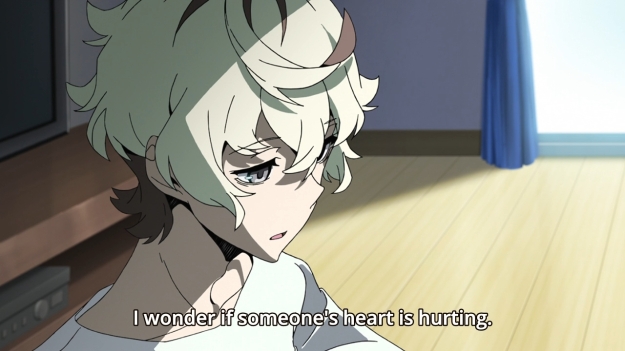 — On the one hand, at least Kiznaiver is taking some light jabs at the ridiculous eyes you sometimes see in manga. At least, I think they are. But on the other hand, the manga here was done by a couple of preteen girls, so… I mean, I’m not expecting some fucking Van Goghs in middle school.

— So is this an animation error or is Kiznaiver still mocking bad manga art? Either way, I’m reminded of the elvaans in FFXI. Goddamn dhamel necks…

— The documentary crew ambushes Honoka, but luckily, her friends show up to scare them off. The girl still suffers a breakdown, though.

— Unfortunately, Tenga lets it slip that they’re here on a mission to save her. Well, nobody wants to hear that. Again, it’s the whole “You only give a shit because you have to” problem. So naturally, the girl storms off. Everyone proceeds to stand around and look sad. Cue the slow, aching string soundtrack. They also tell us that they feel sad. More specifically, there’s a gloomy feeling in their stomachs. Hey, psst, do you realize that they’re sad? Wait, let me spell it out even further just in case it still isn’t apparent:

Nice DBZ reference. At the same time, however, emotional pain has been equated to a fucking power level. We’ve quantified our feelings.

— Even though Honoka doesn’t want to share her feelings whatsoever, Nico argues that it’s a good thing! After all, Honoka’s emotional pain has been divided seven ways, so it doesn’t feel as bad as if she was carrying the burden all by her lonesome! Yeesh. How ’bout the new pain of realizing that everyone is now up in your business?

— Before the episode ends, Katsuhira pays Noriko a quick visit. After all, he hasn’t had much to do all episode. He may as well steal the show now.

— The guy then tells Noriko that he’s disappointed in her. I guess that’s progress.

So how do I feel about Honoka’s story? It’s a step up from Chidori’s love problems, but like with most shows, the problem is in the execution. We still don’t know what happened between the two girls, and yes, I know we’ll find out eventually. But it’s like the friendship definition from earlier: everything’s done backwards. The story is trying to achieve an emotional payoff without actually creating the foundation for it. Honoka feels bad, guys. She feels really bad. She’s hurting. The characters tell us over and over that she’s hurting. They know, because they’re hurting. Golly gee, she feels bad. Do you realize she feels bad yet? And this entire time, we don’t actually know why she feels bad! Okay, something happened between her and her friend. But that’s all I know, so as a result, I can’t actually feel anything for the girl. 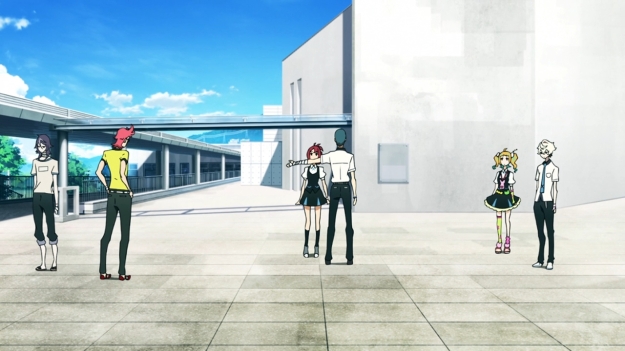 I just have these characters standing here, looking sad while being perfectly spaced across the scene, telling me over and over that they feel super sad. It’s like the story needs to prime us for the eventual reveal. If they tell us over and over that this is a sad situation, we’ll just believe it no matter what happens in next week’s episode.

“So this is what it feels like,” Katsuhira says, “when your heart hurts.” Ahhhhhh, it’s so maudlin. 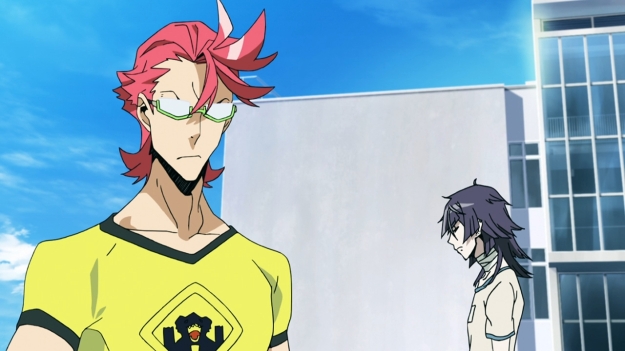 It’s heavy-handed as all hell.