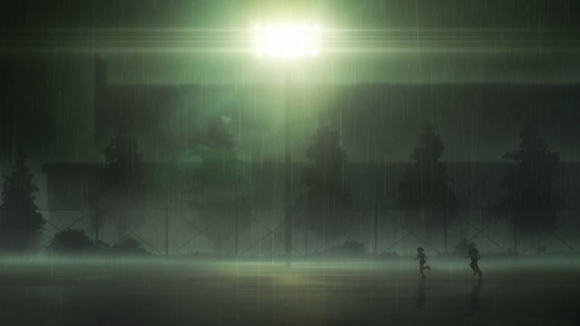 Chidori sees Katsuhira embrace Noriko, and she is heartbroken. Eventually, her emotions get the better of her and she runs away from her friends. An angered Tenga commands Katsuhira to chase after her. The latter doesn’t understand the need for him to perform such a grand gesture, but other than a meek utterance of ‘why,’ he doesn’t really question it. I doubt the audience questions it either. It’s sort of expected for guys to run after crying girls, isn’t it? You never see it the other way around. Anyway, Tenga continues to throw his anger around. He’s frustrated, too; after all, he’s in love with Chidori, but the girl’s too hung up on Katsuhira to notice Tenga’s feelings for her. More importantly, he doesn’t really understand why she prefers Katsuhira over him. Unable to resolve his frustrations, he tries to take them out on Noriko, It’s interesting, isn’t it? Tenga, too, has an unrequited love, but for him, it leads to anger, not heartbreak. No tears. No sorrows. Even when he’s beating the hell out of Katsuhira later in the episode, I see no tears. That sadness has completely manifested as rage and only rage. Why?

While this is all happening, Nico is also hurt. She’s in love with Tenga, but not surprisingly, Tenga is too hung up on Chidori to notice her feelings. But what does she do? Much like Chidori, a painful realization sets in when she realizes that she can’t compete with her rival. And much like Chidori, she runs away in tears. Now it is Yuta’s turn to command Tenga to chase after Nico, ’cause, y’know, guys are supposed to chase after girls. Girls are supposed to run away and cry. And like Katsuhira, Tenga doesn’t understand why he should chase after Nico, or what he’s even supposed to do once he catches up to her. Hm. Hmmmm. Earlier in the series, I couldn’t help but notice how the girls seemed to have more profoundly emotional stories. To briefly recap what I mean by this, take a look at how the story develops or hasn’t developed these characters. Chidori gets to tell the world not once but twice how much it hurts to be in love with Katsuhira. Maki’s tragic backstory tugs at the heartstring, especially since it deals with unrequited queer love. Nothing wrong with that. 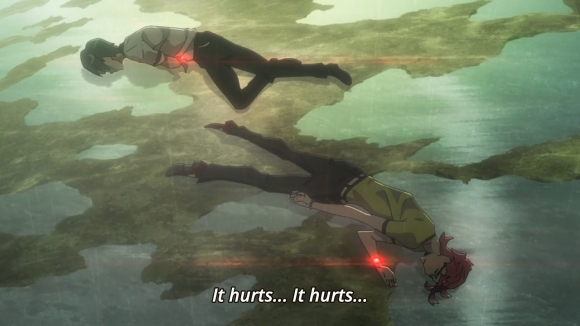 But there is something wrong with how Tenga and Yuta have been left out of the mix. All we know about Tenga’s past is that he’s scared of dogs. Maybe he’s come from an abusive family. Maybe. But he doesn’t get an episode devoted to him and his feelings. At best, he’s allowed to be angry. Sometimes, he’s a braggadocio, but that’s the extent of Tenga’s emotional spectrum. If he’s sad, it’s a byproduct of other people’s sadness. He’s not sad for his own sake. Likewise, what do we know about Yuta’s past other than that he used to be fat, and he’s deeply ashamed of this? In fact, he’s shown even less extreme emotions than Tenga. Neither profoundly sad nor angry, Yuta has only served one purpose: from a certain point of view, he too has chased after a sad girl. Despite her protestations, Yuta impinged himself on the self-pitying Maki during her mini-arc, and helped the girl resolve her issues. In that sense, Maki is not so different from the other girls either. Hell, one of the past episodes featured the girl running dramatically away from the group while they stood there and told us how sad she must feel. Good god.

What does this all mean? I think I’ve said more than enough. You guys can draw your own conclusions, and I’ve certainly drawn mine. 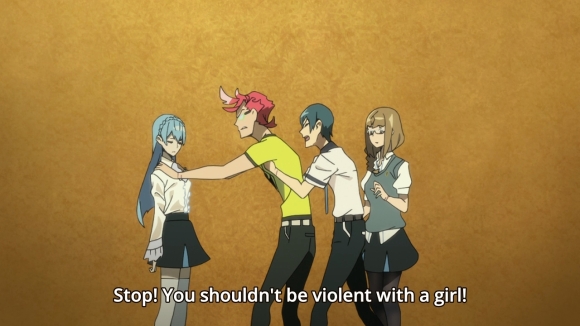 — Instead of using the Gomorins to scare everyone into the same room, why doesn’t Yamada just, I dunno, tell them to go to the same room. Why wouldn’t they listen? They’re trapped in the school, so they may as well listen to what he has to say.

— I’m so distracted by the stuff I wrote above that I can barely discuss the rest of the episode. Um, like before, I’m guessing that Noriko did something (probably tried to commit suicide) in order to give everyone pain, but the pain was so great, it nearly broke those kids. Meanwhile, the incident traumatized Katsuhira so much that he’s repressed his memories. Only by holding her is he able to slowly remember those early days and those kids. Or something like that. If I’ve got something wrong, the Internet never hesitates to correct me anyway.

— This moment is like something outta 2001: A Space Oydssey… except, y’know, without all the kids writhing in pain.

— Noriko must be Katsuhira’s Nanaki. But on a more serious note, is Okada obsessed with painful pasts or what? 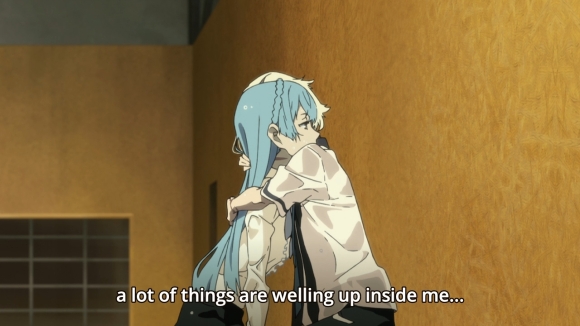 — Is that a candy bar in your pocket or are you just happy to see me?

— “Watch this, Lise. You can actually pinpoint the second that her heart rips in half. Aaaaaaand… now!”

— Again, Chidori is heartbroken, but Katsuhira never even said that he likes Noriko. Thinking about someone is not the same thing as liking them. Hell, I’m not sure if he’s even able to like anyone in a romantic way. But she’s a kid, so she probably doesn’t understand this nuance.

— And like before, it’s hard to relate to this ridiculous love polygon, because I don’t know why anyone likes anyone. An unexplainable crush is one thing. And if I saw my crush doting on someone else, well, that kinda sucks, but life goes on. I’m not gonna cry over a goddamn crush. As such, a love so deep that it makes you run away in tears is another thing entirely. I’m not saying that love has to be perfectly logical as if we’re from the Planet Vulcan, but it has to make a little sense. But we’ve been so caught up in this gimmick of mi dolor es su dolor (I just used Google Translate, so don’t shoot me if I used the wrong Spanish word for pain), that we never even bothered to develop these relationships and why X might love Y, and why Z might love X. These guys aren’t even close friends yet, and you want me to believe that they are in genuine love with each other? Enough for Tenga to commit battery? Enough for these girls to stereotypically run away from the group one by one as generic anime maidens are wont to do? Eh…

— “Watch this, Lise. You–…” Oh, I can’t do the same Simpsons reference twice? Fine, just take this screenshot of a sad Nico and get outta here.

— Y’know, if Tenga can’t understand why Nico would like him, he should probably ask himself why Chidori should like him over Katsuhira.

— The kids are now broadcasting their desires, and it starts with Chidori’s heart begging for Katsuhira to embrace her the same way he had embraced Noriko. But no one likes being second place. Likewise, no one likes being comforted simply because the other person is obligated to do so. So as soon as Katsuhira pulls Chidori into his arms, she calls him cruel. Haha, oh man…

— It turns out Urushi has a conscience, so she wants to stop Yamada’s shenanigans before the kids really hurt themselves. Naturally, the guy tries to stop her, but he can’t just grab her arm or anything. Oh no, you gotta full-on pin a woman to the wall with her hands at each side of her head. Pardon me while I roll my eyes for the billionth time at this anime.

— I like how Tenga is beating the tar out of Katsuhira, and Chidori just stands there and screams. Once again, Yuta has to intervene and try to hold Tenga back.

— Nico starts broadcasting her inner desires, then Maki gets all defeatist and gives up on their friendship. The resulting emotional pain is so heavy that everyone falls to the ground and writes around in the mud (much like those kids in Katsuhira’s past). Meanwhile, our emotionless hero doesn’t feel any of it, but he should probably go and get some medical attention.

— Eventually, the storm breaks, and Urushi finds the kids still lying there on the football field. What’s worse? Overwrought emotional drama or a typhoon-induced hypothermia?

But eventually teens grow up and most grow out of their overwrought drama period. That said, if they stayed in hospital recovering from hypothermia, at least they’d have an excuse for the drama.

You know, other than the medical experiment performed on them without permission.

You can get help for drama, too. Mental help.

Worst episode yet. I can only imagine things spiraling from here.

I’m genuinely curious as to what lies in the minds of the people who apparently thought this episode was a brilliant and emotionally devastating piece of drama. Like, holy shit. I could almost get over the paper-thin love polygon, were it not for the fact that it blatantly only exists so we can have yet more ‘yay, friendship!’ stuff afterwards.
The characters have just degenerated to clockwork toys playing out utterly banal roles. But I love him! But I love her! Argh I’m angry! Argh I’m crying! Oh no, friendship is over! (At this point only Honoka and perhaps Yuta seem to have anything more to them, so of course they’re irrelevant this week. And I still don’t know why Hisomu exists.) The gang’s upgrading to telepathy seems to arbitrarily happen at the peak moment of angst, and then manifests in the most boring way imaginable. Every single aspect of this series has become so fucking slapdash, it feels like “Close Enough: The Script”.
This comment went on longer than intended, I just keep recalling more things I was unimpressed with. The first time I’ve considered dropping the show.

I’m genuinely curious as to what lies in the minds of the people who apparently thought this episode was a brilliant and emotionally devastating piece of drama.

Whether people will admit it or not, there are certain shows that they want to love. This is one of them.

“B-BUT THAT’S A FEMALE!!” always bugs me. Are women people or fabrige eggs? If eggs then they shouldn’t be given character or personality in your world and so just let the men be humans. If people then why, oh why, must you bring up this nonsensical notion?

How about just “Don’t be violent”? Ever think of that one? Whether the thing you’re beating has a uterus or not doesn’t matter. Heck I’d say the thing’s humanity or lack thereof doesn’t matter. Short of an inanimate object, just don’t wail on anyone or anything.

Anyway, the only thing I liked about this episode was Katsuhira’s face after getting beaten. Not that the situation was at all well written but I was surprised to see a modern anime actually give physical violence any weight by having its protagonist get a visibly smashed face.

Also, is it just me or does this episode’s forced dynamic of violent Tenga and protective Yuta seem like fujoshi bait to anyone else? Maybe I’m cynical in thinking too much about the potential marketing meetings behind this anime but it seems like something suits would do.

I was surprised to see a modern anime actually give physical violence any weight by having its protagonist get a visibly smashed face.

Let’s see what his face looks like next week. I wonder how fast it’ll heal up.

And no, I don’t see the fujoshi bait. They don’t interact all that much, and besides, if people want to ship those two, they will do it. Shippers have never needed much help in this department.