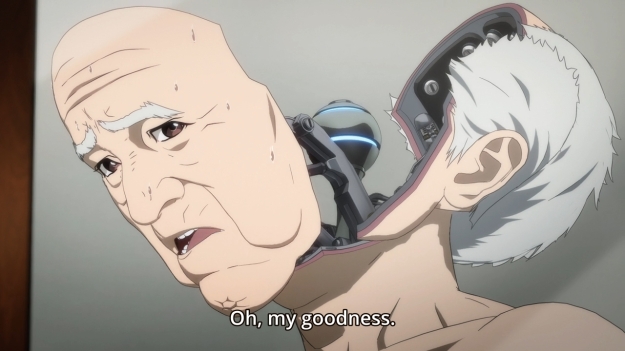 Hmm. Hmmmm. Sorry, I’m just at a loss for words. Well, not really. Here comes a bunch of words about the episode. Upon first impression, however, I have to admit the anime left me in an odd place. Inuyashiki is certainly different. It’s not often that an anime protagonist is a 58-year-old man with the charisma of a tin can. Shortly after being diagnosed with terminal stomach cancer, Ichiro tries to deliver the bad news to his family. He’s a very meek man, though. He’s incredibly soft-spoken and passive. He might look like he’s pushing 80, but when I first heard him speak, I thought I was listening to a kid. And for a variety of reasons — some his fault, some not — Ichiro’s a huge disappointment to his children. Hell, he can’t even tell his own wife that he has skin cancer. But I can’t blame her. She asks him point blank, “What? Is there something you want to say?” And if you think her words seem harsh, watch the episode. She doesn’t sound uncaring. She simply sounds like a mildly annoyed wife, and who wouldn’t be in her position? She just had to clean up dog shit. On the other hand, he needs to speak up, but he just runs away. I suspect this is not new behavior. I suspect Ichiro has often run or shy away from difficult situations.

I guess what I’m saying is I don’t pity Ichiro that much. After failing to talk to his own wife about a very serious and necessary subject — for Christ’s sakes, man, you are going to die in three months! — he runs off into the night, sobbing to his dog because he doesn’t believe his family would even cry for him. He might be right… but still… Look, terminal cancer sucks. Your children not respecting you sucks. But people can’t read minds. And if you’re this passive, then what do you expect? No one deserves respect simply because they’re old. Therein lies the issue. I don’t automatically venerate the elderly. Blasphemy, I know, but in my eyes, respect has to be earned. That doesn’t mean I think we should disrespect people until they prove themselves, but hey, if you people treat you as though you don’t matter, maybe it’s because you act like you don’t matter. Don’t like that? Then do something about it. And the truth is, by being meek and passive — by running away from his problems — Ichiro is the one who dehumanizes himself. By not being assertive, by not asking for what he wants, by not having self-respect, he dehumanizes himself long before the aliens ever could. 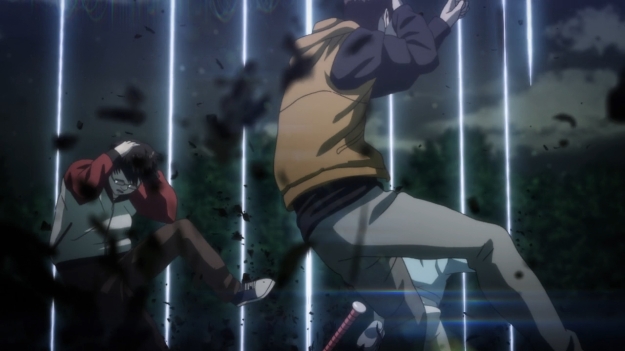 Oh yeah, the aliens. So uh, it’s not clear what the aliens are doing on and around Earth, but they accidentally kill Ichiro and some kid. Well, let’s unfuck the situation and just restore those two back to life. Unfortunately, they don’t have organic matter on hand. They simply have weapon parts. As a result, our protagonist comes back to life as a robot. A very dangerous robot. So we get the usual “What am I? I’m a monsteeeeeeeerrrrrrr!” schtick. Ichiro no longer has to worry about stomach cancer nor does it appear he ever has to eat organic food again (maybe he’ll still need to “refuel” in some other capacity). On the other hand, he laments the fact that he’s unable to cry even though he’s sad, and he blames it on the fact that he’s no longer strictly human. But when he runs into a bunch of punk kids picking on some former vagrant — the man’s apparently not homeless anymore because he’s managed to rent an apartment — Ichiro springs into action. Very specific action. After driving them away with a pretty laser show, he somehow uploads a video of these kids being sociopaths, and IDs them to the rest of the country. That’s some superpower, alright. It’s not entirely clear who’s in control. I don’t think Ichiro’s the one who did all of that, but yeah… More importantly, the good deed of merely stepping in allows the old man to suddenly be able to cry as if he’s still human.

But that’s curious, isn’t it? Why would a robot need to cry? And why couldn’t he cry before? Well, the first question is unnecessary if you really think about it. Why would a robot need to human skin? In order to look human, duh. So why would a robot need to cry? In order to feel human. So like a lot of stories involving human-like robots, androids, replicants, and what have you, it’s as if Inuyashiki is trying to say that it doesn’t really matter what you’re made of on the inside. You can still have personhood. Conversely, those kids might be made of fleshy matter, but they’re clearly monsters. They have no regard for another living being, so who’s to say they’re human at all? And the reason Ichiro can cry at the end is because he’s finally earning it. He didn’t just walk away. He’s actually doing something. And when you perform a good deed, you earn respect even if it’s only self-respect. It doesn’t just fall in your lap. Again, I would argue that even before the alien encounter Ichiro had dehumanized himself. I don’t blame it all on him. I’m not saying he deserved to be disrespected by his kids. Nevertheless, we are ultimately responsible for our lot in life. As the old adage goes, be the change that you want to see. If people don’t care about you, do something about it. So I don’t think the lesson is, “Hey, let’s just respect old people more.” You gotta earn it, man.

Boy, that OP sure was something, huh?

King’s Game walked up to the edge, then immediately backed out. It looked as though Natsuko would be raped, but it turned out she was just putting on an act. The show didn’t even have the balls to end the episode on a cliffhanger, thereby making us wonder if the guy was going to go through with it or not. Maybe that’s for the best. I don’t know if I’ve ever found much substance in shock value. Plus, the whole “Is rape justified if it would save both parties” is not exactly a thought experiment I particularly want to explore. At the very least, I wouldn’t expect King’s Game to answer the question in any meaningful way. So instead, Natsuko goes completely 180. Any sudden change in personality is jarring, but somehow, it feels a cheap here. But at least it was unexpected? 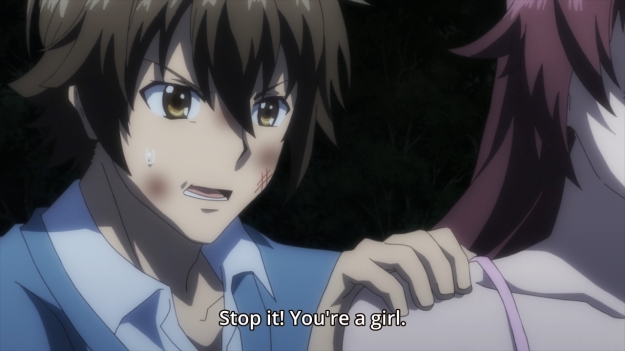 That’s more than I can say about Nobuaki’s flashback. Have you heard the tragedy of Daisuke the wannabe rockstar? Well, don’t bother. It’s so predictable and bland that I was just dying for the episode to end. Kids receive the King’s orders, kids think it’s a joke, it’s not a joke, someone die, kids get scared, more people die. We got this same basic plot structure last week, so seeing it again was redundant. The show tries to get you emotionally invested in Daisuke by going on and on about his dreams to be a musician. I can’t speak for everyone, but it didn’t work for me. He dies pathetically, and I’m just waiting for something juicy — anything — to happen.

But what is juicy? Do I want to see these kids get tortured or sexually assaulted? That’s really hard to say. The cop-out answer is to simply say that I’m bored. That nothing I see here is remotely original. It’s easy to say, “Just tell a better story.” And I guess that’s true. For something that should feel like a page-turner, King’s Game is rather bland. I’m not dying to see what happens next. But what would make it a page-turner without making the show too trashy? 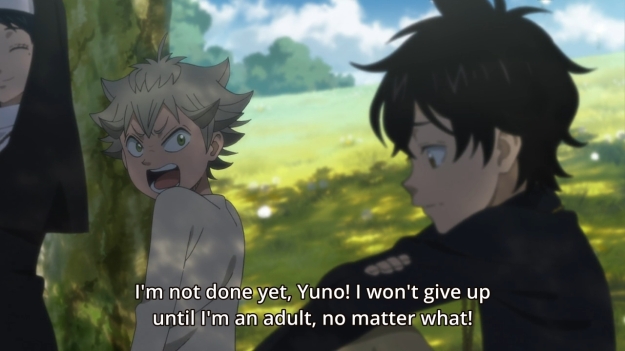 I shut the episode off at the 10:45 mark. Instead of grown-ass Asta screaming every line at me, I got chibi Asta screaming every line at me in a flashback. Also, Black Clover has one joke at the moment, and it’s content to ride that joke into the ground: “Hey Sister, will you marry me? No? WELL, I WON’T GIVE UP.” So I’ll do it. I’ll give up. I give up on you, Black Clover.

4 thoughts on “Inuyashiki Ep. 1 and more”