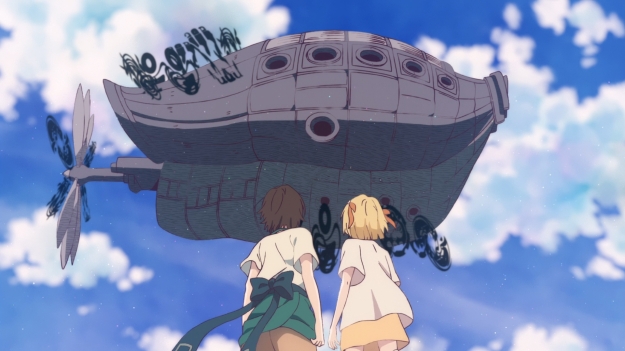 Boy, did that not escalate quickly. I was waiting for something to happen, and it finally did. Just at the very end of the second episode. Okay, now I want to see more. It’s not that Children of the Whales is bad. It’s actually pretty decent. And if we can only compare it to other fall offerings, you might even say Children of the Whales is downright excellent. It’s just… well, every season, there’s a show that people want to love, and I can’t help but think that this is a perfect example of that very idea. If we had an Oscars for anime, Children of the Whales would be Oscar bait. It has that kind of feel, y’know? In truth, I want to love it, but I don’t. But don’t get me wrong, the show is not without merit. Right off the bat, it has two qualities that are genuinely praiseworthy.

First, the anime definitely has a distinct visual style. The show is not mind-blowingly gorgeous or anything, but even an 8 will look like a 10 when surrounded by rejects. And let’s face it, most anime series are fugly. Of course, looks aren’t everything, but you need to have a style. You need to wear your look with pride. Most shows, however, don’t even want to look different. There’s a certain generic anime aesthetic that, although it slowly changes over time, most studios are content to ape without shame. Even if you don’t have the budget for great technical animation, style doesn’t exactly require it. That’s not to say Children of the Whales is wholly original. The characters definitely aren’t. But the world around them is at least novel. Novel enough for an anime series anyway. The show hasn’t hit a home run with its visuals, but it’s at least trying. 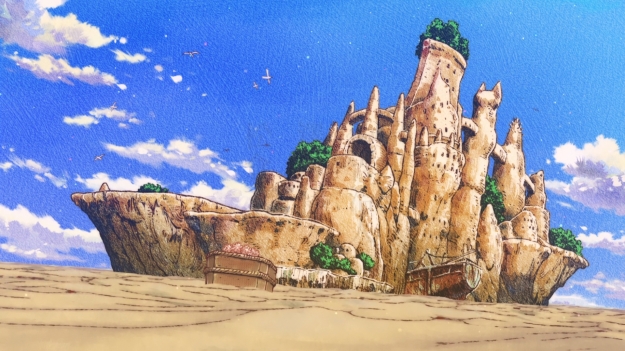 Secondly — and speaking of being cast adrift — what an interesting setting! Chakuro and friends live on a giant castle-boat made out of mud. In fact, they refer to their home-slash-vessel as a Mud Whale, and surrounding them is an endless sea of sand (which must be coarse, rough and irritating — it probably gets everywhere). Every so often, their castle-boat bumps into a driftland, an island from which people can go on expeditions to scavenge for supplies. But this time, Chakuro stumbles upon a mysterious girl, yadda yadda yadda, their lives will never be the same again. You thus can’t help but wonder why the world is like this. What happened to the rest of humanity? What do you mean the people of Falaina are sinners? Why is it necessary to pursue and kill what appears to be peaceful nomadic community? Naturally, it’s too early for the show to divulge its secrets.

There are a few tantalizing clues scattered across the first two episodes. Chakuro refers to the mysterious girl as Lykos, but it is not her actual name. Rather, Lykos refers to some pulsating, organic mass that devours emotions. That sounds almost Lovecraftian, doesn’t it? Even more monstrous, a countless number of people have voluntarily rendered their hearts hollow by coming into contact with Lykos. “Emotions ruin the world,” says the mysterious girl, “They are unnecessary.” Which is ironic considering how the lack of emotions is seemingly what allows her people to wage endless wars. Still, I don’t know enough about this universe and how it came to be, so I’ll withhold much of my judgment for now. Unsurprisingly, the Council of Elders no longer want their people to go anywhere near the girl’s driftland, but it’s too late. Even more mysterious strangers suddenly appear from the sand seas, and they do not look friendly.

My dissatisfaction with the show stems from two issues. First, the characterization is woefully unimaginative in its execution. The world is fun and fascinating in its construction, and yet, we’ve gone and filled it with such basic anime archetypes. Here’s the wide-eyed boy who’s not so talented, but he’s full of heart and spunk. He’s going to internal monologue your ears off, but it’s okay! He’s an archivist, so it’s his job to spell everything out to the audience. They say rain is a sign of good omen. Thus, I turn to my friend and tell her that good luck is on the horizon. Christ, how redundant. When he accidentally touches Lykos and a flood of memories pours into his mind, the scene would’ve been far more effective without his internal monologue. Oh yeah, these kids have magical powers too. You can also be an adult and have powers, but barely. At best, you’ll live till your early 30s, but all thymia users die young. Well, I guess that explains that.

But the cliches don’t end there! Chakuro’s foil is the angry, brooding Ouni. Unlike our boy hero, he’s tall, cool, rebellious at heart, and incredibly gifted when it comes to manipulating his thymia. But he yearns for freedom whereas Chakuro is a bit of a scaredy-cat. Ho-hum. Oh yeah, did I say mysterious girl? Why, we have a mysterious girl who’s totally a Rei-type, i.e. completely cold and emotionless. Chakuro will eventually, I predict, convince her that feelings are A-OK! She also has blue hair, but she’s slightly different because she has dark skin. I mean, we gotta change things up a little bit. There’s also Sami, the childhood best friend who’s totally in love with the main character. And of course, what isolated society is complete without a Council of Elders who know more than they’re letting on?

Despite it all, I could still forgive the show employing such generic characters. But Children of the Whales almost did me in with its early light-hearted atmosphere. Outside of a handful of scenes — like the ominous graveyard of fallen swords or the alien Lykos — the majority of the first two episodes are a bit too slice-of-lifeish for my taste. At the same time, I’m not crying for grimdark, edgelord bullshit, but right off the bat, I’m buried under a mountain of romantic subplots. Alright, I’m exaggerating and it’s more like three subplots, but that’s still three too many. I already mentioned Chakuro x Sami, but there’s also Lady Taisha (she doesn’t look remotely 42) and her admirer as well as Suou and… probably every girl on the island aside from his sister. It’s just too early for me to care about their love lives! Hopefully, the sudden twist of violence at the end of the second episode means we won’t have to deal with Chakuro x Sami any longer.

But let’s pull it back. Children of the Whales does have some promise, especially regarding its subtext. There’s a term for people who can’t express their emotions: reduced affect display. It has several causes, but the one that jumps out immediately is PTSD. In other words, war and violence often render survivors emotionally numb. Meanwhile, Lykos devours our emotions, because painful ones are too much to bear. Food for thought. But even on the Mud Whale, people are discouraged from crying. The kids tease Chakuro, because he couldn’t fight back his tears at Behini’s funeral. Customs be damned, aren’t funerals the perfect time for mourning? Aren’t negative emotions — as long as they aren’t debilitatingly overwhelming — actually healthy for us? Crying is like a reset button for our mental state. It allows us to express ourselves and release our pent-up emotions in a (usually) controlled and safe environment. Why would you want to deny that?

So yeah, the anime has a lot of potential beyond the second episode’s cliffhanger. Of course, I want to know what happens next. I want to know who lives and who dies. I want to know if this is truly the end of Sami (probably not). But the show also has the opportunity to explore some rather delicate topics through its fantastical setting, which is the primary reason I watch anything. I just hope that we’ve truly turned a corner, and are ready to leave the carefree atmosphere and generic anime archetypes behind.

2 thoughts on “Children of the Whales Ep. 1 & 2: Flawed but promising start”