But before we get to the big bad baddie, let’s wrap up the Moon Festival. Rindo drops by to tease Kuga for his third day defeat, but she has a point: he lost because he’s so cooped up in his pop-up restaurant. I even pointed this out last week. Kuga’s biggest mistake was turning down a taste of Yukihira’s food. What self-respecting chef doesn’t want to try new food? What self-respecting competitor doesn’t want to see what his rivals are up to? Kuga gives in, and is ready to accept a shokugeki, but Yukihira insists that they ride the rest of the festival out. There’s still one day left, so he hasn’t necessarily won. I’d quit while I’m ahead. After all, he dug himself a huge hole in the first two days, so in terms of total sales across the whole event, he’s still in second place. Why risk it? Then again, I’m not a shounen hero with plot armor, so what do I know? Something, something, dignity, I’m sure.

Then whole thing ends anticlimactically. Without any fanfare, Kuga comes out ahead in total sales. What a letdown. I didn’t get to see if Kuga would do anything on the last day to counter Yukihira’s curry mapo tofu thingamajig. I didn’t get to see if Yukihira himself had one more trick up his sleeve. I know this arc has gone on long enough, but I’d rather have a good ending than a good set-up. They could’ve sacrificed some of the earlier episodes to flesh out the final day. We’re also shown a montage of how the other stalls finished, but I don’t care about them. I have no emotional investment whatsoever in the other characters, and unless you’re showing me something neat about cooking or running a restaurant, their numbers are completely irrelevant to me. I only like the chocolate and curry concoction because it does honestly sound kinda cool.

What follows is a mini-backstory about how Terunori wanted to soundly beat everyone in order to re-challenge Eishi. Welp, so much for that. Back in the present day, Rindo takes Yukihira and Megumi to try Eishi’s food. The top ranking member of the Elite Ten has his restaurant in the Yamanote Area, which looks bourgeois as fuck. Every single diner tries to come across as European elite as possible, which is ridiculous. You know the drill: fancy gowns for every lady and 3-piece suits for every gentleman. I’m surprised I didn’t see a tux. This is not what the average 3-Michelin star clientele looks like. This is just anime once again glorifying some really outdated idea of upper-class French culture. The truth is, most 3-star chefs are a bit of a contradiction. They put together meals that will cost you hundreds of dollars per head, but at the same time, they insist on making little to no fuss about it. Oh, diners should just come as they are. So you can dress relatively casually. For men, a long-sleeved shirt with buttons and a sports jacket is honestly as formal as it’s going to get. No restaurant would ever ask you to wear a suit. I’ve also been to 3-star restaurants where the dress code is straight up casual. You could show up in a t-shirt if you wanted, especially when the chef is blaring 80s music in the background. It’s all about perception. These chefs want to feel as though their food is accessible. They want to feel as though they’re cooking for the people. Of course, this is anything but the case. The bottom line will always be the bill at the end of the dinner, and if you’re charging a table more than 100 or 150 bucks (this will vary depending on the size of the party), you’re never cooking for “the people.” But hey, whatever gets these super chefs through the day. Don’t get me wrong. I love fine-dining. I just find this attitude bizarre at best and hypocritical at worst.

On the way to Eishi’s restaurant, we hear about Eizan successfully managing twenty booths. A few chefs end up building an empire, and thus no longer really spend their day-to-day within a kitchen anymore. Gordon Ramsay, for instance, has 19 current restaurants scattered all across the world. He also does those trashy reality TV competitions like Hell’s Kitchen and Masterchef. Well, I’m not sure if Hell’s Kitchen is still a thing anymore. Anyways, you build an empire to make money, but you also get to the point where you need to expand just to keep talent within your fold. Say a talented cook comes up through your flagship restaurant. You see a ton of potential in them; they deserve a head chef position. But your flagship is already being helmed by your right-hand man. What are you to do? Just open up another restaurant. Over the course of decades, you’re going to end up having a lot of talented people who need to get paid. It’s easier to help them find opportunities elsewhere, but if you’ve got a giant ego like Ramsay, you’ll just keep opening restaurants. When’s the last time Ramsay has ever spent an entire night on the line, I wonder?

At Eishi’s restaurant, he is shown chopping asparagus in an empty kitchen. This is silly especially compared to Terunori’s giant Chinese operation full of Shaolin monk-wannabes. If you’re pumping out 9-course meals, you need to command a strong staff, i.e. sous chefs, line cooks, garde manger, patissier, etc. The fact that Eishi is even cooking at all instead of running the pass is also out of touch with how a high-end restaurant really works. No single person can put together a real 9-course meal by themselves. In anime world, sure, but in the real world, no chance. I don’t care if you’re only cooking for three tables at a time. Even if you could pull this off, why would you want to? Having more people means you can ensure a higher quality meal. Plus, who did the prep work? Don’t tell me he spent all day doing that too. As the head chef, you are the conductor. You make sure every ingredient comes to the pass on time, and nothing leaves the kitchen without your approval. Rindo reveals that Eishi is afraid to let others manage his food. Lots of people can cook. Not everyone, however, can be a leader.

As a side note, the decor of Eishi’s restaurant is ghastly. Everything is shrouded in dark colors. You have these weird crystals dangling from the ceiling. It doesn’t feel inviting whatsoever. It’s like eating in an RPG dungeon.

Yukihira and company are immediately blown away as soon as they taste Eishi’s cooking. Yadda yadda yadda, the dishes are transcendent, and everyone loses their clothes. Yukihira marvels over the progression of the courses, and admits that Eishi is out of his league. I don’t know about the second part, but the first part is true. Designing a 9-course meal is a completely different beast. Now throw in some wine pairings.

The chef comes to greet the table, and proceeds to freak out about the temperature of the room, whether or not the seats are comfortable, and if the lighting is too dim (hint: it is). That’s a turn-off. This guy is just a talented cook. He’s definitely not a chef. Rindo also docks his food for its lack of passion. Eishi counters that his entire goal is to erase his presence from his dishes. That’s just odd. It’s even more odd that he doesn’t ask about the food. Sure, that’s confidence. But it’s also stupid. If you get the chance, you always ask the diners how their meal was. It doesn’t show weakness to ask them how the food was. It shows the willingness to accept criticism and grow. 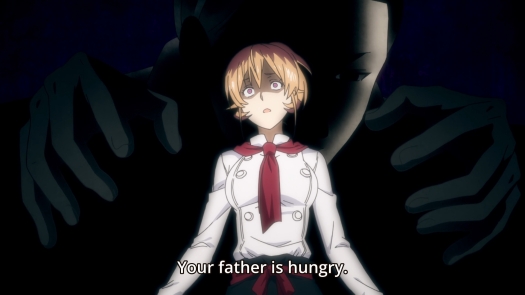 Over in Erina’s restaurant, she’s still waiting for Yukihira’s dad to show up. So that crush is still a thing after three seasons, huh? Gross. But instead, an anime supervillain shows up. Oh wait, it’s just her father. He’s so bad he was exiled from Totsuki… whatever that means. His own existence has even been erased from the family. That’s a bit dramatic. Her father then proceeds to insult her diners, and she just stands there frozen in fear. Way to go, chef. Way to protect your customers. The guy then goes on some elitist spiel. Whatever. I’m not even going to bother parsing any of it. It’s just hyperbolic anime villain nonsense but with a culinary twist. I don’t know any 3-star Michelin chef who wouldn’t enjoy a good burger. Ferran Adria draws his inspiration from street food. Nobody gives a shit about “true taste.”

Luckily, Yukihira shows up just in time, and his obliviousness manages to cut through the tension. He even has another black pepper bun for Erina. Somehow, his presence alone causes Erina’s father to lose his appetite, so the jerk leaves. He steps outside to greet a fleet of cars surrounding the restaurant. Oh my. But we’re not done yet! With the help of a simple majority of the Elite Ten, Azami announces that he’s taking over the school. What an anime supervillain!