Normally, I’d do a write up of Mahoutsukai no Yome, but I couldn’t finish the latest episode. The show just feels so repetitive. Every week, someone tells Chise that she’s too dependent on Elias. She then gives the same basic response: my childhood sucks, my family didn’t want me, boo hoo, Elias wants me, so I don’t mind being complacent. Well, I’m tired of it. I’m tired of the anime’s characters and setting. We never learn anything new about her or her past. The girl just isn’t developing fast enough for my tastes. To compound matters, the setting doesn’t capture me. You can’t just slap a slow piano track onto a scene and call it atmospheric. People will disagree with me vehemently about this, but so be it. I’ve given the anime ten weeks, and I have yet to see anything that takes my breath away. To sum it all up, I don’t enjoy writing about the show, and those posts never get a lot of views, so why not move on?

I finally got my copy of Xenoblade Chronicles 2 last Friday, and I’ve already put in about… 30 hours? Gameplay-wise, I’m enjoying it a lot. The battle system is a little slow, but I like the comboing, the position requirements, the button-timing a la Super Mario RPG. I haven’t run into any boss encounters that are too difficult to handle, but hopefully, it just means I haven’t gotten far enough into the game yet. Still, the overworld is massive, so I’ve been wasting a lot of time just running around, sightseeing, and collecting materials. Materials for what? Crafting, I guess. I’m not sure. There’s a bunch of gameplay mechanics I still haven’t really dove into earnestly. I just unlocked some mercenary group where I have to assign people to missions all across the world. There’s just so much to do.

Storywise, hoo boy, the game is definitely no Xenogears. One of the things I hated the most about Trails of Cold Steel 1 & 2 was how often I’d beat a boss, then in the post-battle cutscene, I’d see my characters getting their asses handed to them by said boss. My team is panting; they’ve been driven to their limits. Meanwhile, the typical JRPG boss tosses his hair all cool-like. Heh, didn’t even break a sweat, kid! Ooooh, it turns out the boss was just using a fraction of their powers. Well, unfortunately, Xenoblade Chronicles 2 is full of this nonsense. I don’t mind unwinnable battles. I do mind, however, this sort of bait-and-switch. It’s just so jarring to go from a dominant victory to getting my ass kicked. I understand that at this point in the story, my party is too weak to really stand up to the bad guys… so let them kick my ass from the get-go! 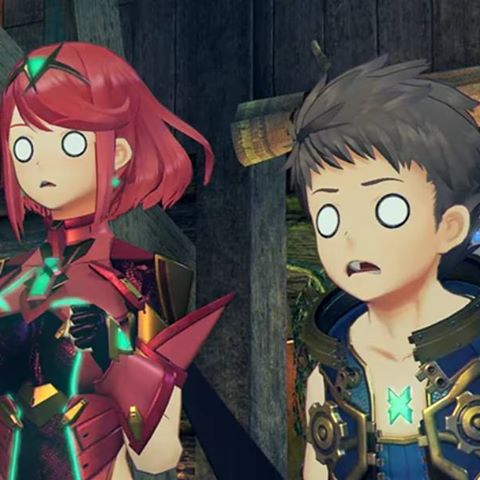 The dubbing is a mix bag. I hate Rex’s voice, but I like Pyra’s voice. The whole adult woman thing is a whole lot better than what she sounds like in Japanese. In the Japanese voice track, she just has that generic, canon priestess waifu voice if you know what I mean. Even though she conjures up face-melting flame and can do spins in the air with a sword, she sounds like someone who couldn’t hurt a fly. Speaking of which, your party feels like a big waifu zoo. You got the default waifu who also doubles as the girl with a mysterious past. Of course, she’s an expert at cooking. You then have the obligatory catgirl waifu, who might also be a bit tsundere for the main character. Then you meet the cute JRPG mascot character — no, the other cute JRPG mascot character — who then builds you a robot waifu that can double as a maid! There’s even a cutscene where robot waifu teaches your priestess waifu how to be moe, but it’s translated to “blushy-crushy.” Anyway, I’m not sure if Morag will join my party later, but there’s the stern, semi-reverse trap military waifu. Bring on all the goddamn waifus.

What they do with the translation is just weird. I don’t want to spend all day talking about it. It’s just something that sticks out like a sore thumb. The subs say Pyra, but the Japanese voice track has Rex referring to his partner as Homura. But whatever. She has fire powers, so pyro… pyra… yeah, sure. But Mythra is really Hikari. Where on earth did you get Mythra? They don’t even have similar meanings. Poppi is really Hana, but I guess poppies are at least flowers. Still, why keep Tora then? Why not call him Tiger? But then you have Ahkos, who is really Yoshitsune. I really have no idea why they bothered to change these names. Tora refers to Rex as aniki in the Japanese voice track, but they just stick with Rex in the subs. I guess big bro doesn’t quite have the same context? But it does, doesn’t it?

More broadly, the story is currently very light and breezy, so it isn’t all that compelling yet. I keep playing because the gameplay is addictive, but the end goal — reaching Elysium to prevent all wars — isn’t emotionally resonant to me. The story doesn’t do a great job of driving home the fact that people are running out of space to live. The characters keep referring to the fact that the nations are on the brink of war, but this is poorly conveyed to the audience outside of maybe one or two scenes of soldiers being mobilized. Hopefully, things get a lot more serious and a lot more interesting from here on out, but so far, I’m pretty much just sleepwalking through the cutscenes. The characters aren’t interesting themselves either. Rex is the type of generic JRPG asshole who unironically says nonsense like “We’ll win with the power of our friendship!” Or maybe it is ironic. The distinction begins to blur after the hundredth time you’ve heard the same battle lines over and over. At one point, I thought to myself, “Okay, someone needs to die to lend this story some gravitas.” Naturally, they kill off the only non-cutesy character. Can’t kill off my waifus.

Oops, I didn’t mean for this post to primarily focus on Xenoblade Chronicles 2, but I guess I don’t have much else to talk about. I still haven’t gotten around to watching Children of the Whales nor have I really gotten the chance to marathon an older anime series. My usual routine is work, watch anime, watch movies, sleep. I have been watching a ton of movies, but I’ll talk about them in an end-of-the-year post. That way, I’ll also be able to cover the new Star Wars movie. I can also finally get around to detailing my thoughts on Blade Runner 2049, which I’ve now seen three times.  But I know you guys would rather hear me rant about A Bad Moms Christmas, huh?

Anyway, you’ll see more of these posts from here on out. From time to time, I want to step back from the episodic write ups and just ramble a bit about everything and nothing.

13 Replies to “Just Rambling: Mahoutsukai no Yome and Xenoblade Chronicles 2”