We find out that as kids Alice tried to send letters to Erina, but evil Azami would shred each and every one of them. As a result, Erina could never reply to Alice. She never knew she got any letters. The best part is when we see young Alice checking her mailbox every so often just to find it empty. It’s so sad, you guys! She even checked her mailbox in all the elements. All of them! In the rain, in the heat, in the dead of winter! You even get to see snow pile up on her head because she walked… what, like five minutes outside of her home to check the mailbox? SO SAD.

Since Ryo managed to score a victory against Central, Alice asks Azami if he still thinks his way is the only way. It’s a bad argument, though. There have been 33 matches today, and Ryo is the only challenger to pull out a victory. That’s hardly an indictment against Azami’s philosophy; if anything, he’s being vindicated. Either that or the judges are unqualified and biased. It’s hard to say since we’ll never get to see those matches. Azami’s beliefs are just bad anyway, and you don’t need a bunch of upstart kids to beat him to know that. I know, I know. It’s a silly shounen cooking show, so it’s not meant to be taken seriously. But you must also realize that I love the art of cooking and the restaurant industry, so I’m merely using these Shokugeki no Soma posts as an excuse to talk about topics that I’m really passionate about. If you don’t care, then you can skip the next four paragraphs.

As I was saying, not only does Azami’s beliefs violate the spirit of cooking for reasons I’ve pointed out in previous posts, it also doesn’t make any logistical sense. It’s too top heavy. You cannot sustain a restaurant industry that serves nothing but haute cuisine. The profit margins are too thin. If you’re in the upper echelon — like say Thomas Keller, Joel Robuchon, Alain Ducasse, etc. — then sure, you’re booked out every single night for months and months ahead of time. You can safely operate without fear of going into the red. You never have to worry about empty covers or no shows. But again, that only applies if you’re the creme de la creme. Where does that leave the rest of the industry? It’s like going to buy a car, but finding nothing but Bugattis or… fuck, I don’t know cars, but you get the point. That’s why even the top chefs of the world will play it safe. They always open up something casual to operate alongside their top restaurants. Why? ‘Cause you can pile ’em high, and pile ’em cheap.

Thomas Keller has The French Laundry and Per Se, two incredible flagship restaurants, but he also has various Buchon Bistros and Buchon Bakeries all across the US. These smaller, less ambitious locations are where you actually make the bulk of your money. These places have much cheaper ingredients, cheaper labor, cheaper rents, just cheaper overhead all around. Most of all you can turn tables over and over and over. Go back a few episodes to when Yukihira dined in Eishi’s ghastly-looking restaurant. He had only three tables in the entire place! This is an exaggerated example, but it’s not really that far off the mark. If you look on Atelier Crenn’s website, it boasts the fact that they only serve eight tables at a time. They have two covers a night, but still, that’s only 16 tables altogether. A bistro can do maybe five or six covers a night by comparison. In flagship restaurants, the dining experience is everything. You don’t want to turn tables, because you don’t want to harry the diner into finishing their meals before they’re ready. That does mean, however, losing out on a ton of potential profit.

So here’s what’s going to happen… for the creme de la creme, they’ll get to keep their fancy restaurants. They’ll get just enough business to keep their restaurants afloat. For the other 99%, however, they’ll go bankrupt and have to close their restaurants down. They just can’t find enough diners to pay exorbitant prices for their food. Meanwhile, all those kids that just got expelled from Totsuki? They can and will likely go on to open their own places. You don’t need Totsuki to be successful. You certainly don’t need a culinary degree to be successful. You just need to provide something that people want. It’s simple economics. People who can’t afford Azami-style food will flock to these places as long as the food is good. The expelled students will become successful. On the other hand, the 99-percenters will become resentful when they see that they’ve been led astray by some crazy Billy Joel wannabe with his black-on-black shirt and suit combinations.

At the end of the day, a chef is a servant. There’s a bit more pomp and circumstance, but c’mon, you cook food for others. Sure, what you do is an art, but Joel Robuchon is vastly different from the likes of, say, Monet or Picasso. Centuries and centuries from now, you’ll still be able to appreciate a Pollock. A meal, however, is practically ephemeral. It can only be enjoyed in the moment. The beauty of the dish can only last a couple of minutes before everything goes cold, the sauces begin to coagulate, the fat begins to congeal, so on and so forth. And when you pass away, who will remember you? A hundred years from now, how many people will still know what Joel Robuchon contributed to the culinary arts? Would we remember Julia Child at all if she didn’t have a TV show? Moreover, can any of us name a single chef from the 1800s? 1700s? Fat chance. So again, cooking is an art, but it’s not like other forms of art. It shouldn’t be treated as though it belongs in a museum.

Alright, let’s get back on topic. 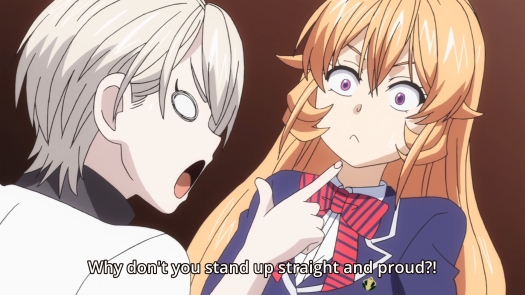 Alice finally gets to give Erina some real talk, so maybe the latter will stop being such a sad sack. As for the rest of the episode, however, we pretty much get nothing but exaggerated humor, so there’s not much to talk about.

The way they’re being all secretive here makes it seem like they’re cooking meth or something. 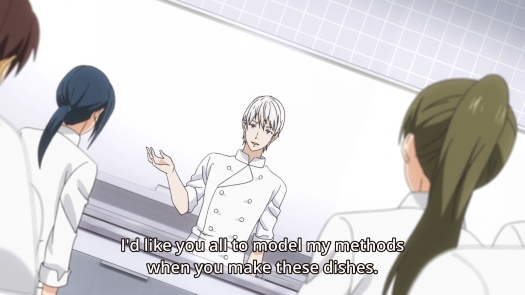 Eishi ends up being a substitute teacher for one of Yukihira’s classes. Anyone can follow a recipe to a T, by the way. That’s what cookbooks are for. You can easily look up recipes from Alinea and pretend that you’re Grant Achatz for the night.

Yukihira ends up being Eishi’s sous chef, so the former gets to show off all his recently acquired French techniques. It’s a boring sequence, though. Everyone in the class marvels at the hero’s ability to keep up with Eishi, but we don’t actually get to see any real cooking. Ingredients flying up into the air is not particularly interesting.

Also, these are way too big to be amuses. An amuse bouche is ideally a single bite or two at the start of a meal. You can certainly have a series of amuses, but you shouldn’t stuff the diner before they even get to their full course meal. 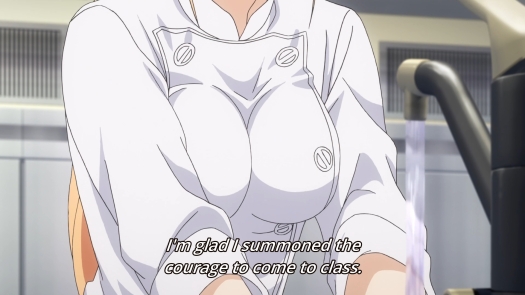 Elsewhere, Erina is back in class, and naturally, the camera’s focus is back on her chest. Clothes don’t normally conform to breasts like that, but who knows? Maybe Erina got someone to tailor a chef’s breastplate just for her. 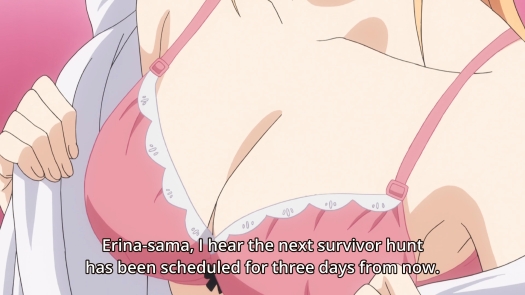 And when I say the focus is back on her chest, I am not joking. Y’see, this is necessary bec-

In the land of infinitely less curves, Eishi offers Yukihira a chance to become his right-hand man. You’d be killing two birds with one stone. Not only is the hero rather skilled, you’d also cut off the resistance’s best chance at toppling the Azami administration. Christ, I just used the word “resistance” in a Shokugeki no Soma post. But in reality, Eishi only really wants Yukihira for our hero’s ability to support him perfectly in the kitchen. Yukihira declines the oh-so-generous offer, and after some banter, things get a little heated in the kitchen. The First Seat is suddenly on the line. Hoo boy, that escalated quickly. 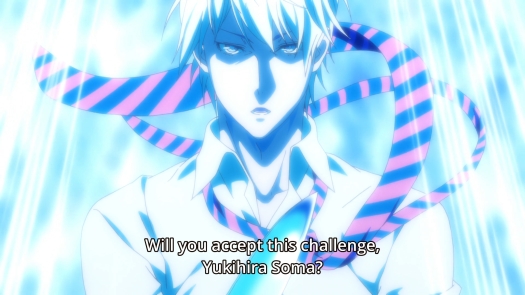 If Yukihira loses, he’ll have to join Central and become Eishi’s man-slave. Obviously, Eishi is confident he’s going to win, and he’s right! Yukihira is no doubt going to lose. It’s way too early for him to start challenging the big boys. After all, you can’t defeat Vegeta without first dying, running along a path for fifty bajillion episodes, spending another fifty bajillion episodes training with King Kai, then naturally, taking the last fifty bajillion episodes to get back in time to save Earth. Yeah, something like that but replace all the fighting with cooking. You can keep the vegetables, though. My point is, there’s no tension here, because you know Yukihira can’t win yet. More importantly, even when he loses — and he will lose — he won’t have to join Central. You also just know that Eishi won’t make the hero do it. It’d be interesting to suddenly see Yukihira on the wrong side for a few episodes, but this is neither a particularly creative nor risky anime. Our only hope is that these two will whip up a couple of interesting dishes, because Shokugeki no Soma is terrible at drama and general plotting.

The juices are rippling? What?

Yeah, whatever. Before he starts cooking, Yukihira asks Eishi what the endgame is. What exactly is Central after? The latter reveals that they hope to shut down every restaurant in Japan that isn’t serving gourmet food. First, that’s impossible. I mean, under whose authority could you even use to pull this off? Second, it’s like I said up top: this is just bad business. Gourmet food — and I mean legit gourmet food and not the premium mediocre bullshit from Whole Foods that is nevertheless labeled “gourmet” — is super expensive. But sure, whatever… Azami is a supervillain who can somehow make places shut down because he said so. Even if you make tons of money serving delicious, affordable food, somehow you’ll have to close up shop because some creepy child abusing asshole said so. And now, it becomes personal for Yukihira, because gosh, he really loves his family restaurant. Tune in next week for his inevitable defeat but renewed determination!