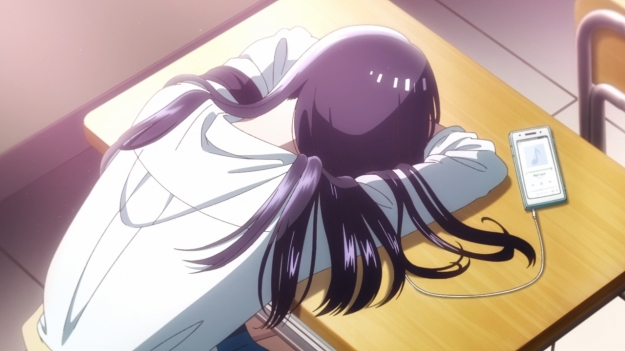 Love is like after the rain, huh? I don’t get it. But at the same time, I don’t really have to get it. Akira used to be on the track and field team, but an injury has sidelined her indefinitely. In the meantime, she works at a diner and she has fallen in love with her manager, a middle-aged divorcee with a kid. He’s no Prince Charming by any means. When her friends ask Akira to describe her type, this is what she has to say: “…someone who has bed hair, and leaves his fly down sometimes. And someone who sneezes loudly.” Sometimes, our lover’s quirks make us love them even more. Let’s just hope they just remain quirks and don’t become character flaws once we truly get to spend a lot of time with them.

Throughout the show, there’s some interesting use of imagery at play. Here, we see that there are two worlds, and our heroine is clearly separated from her peers. Here, the viewer are separated from the kids via a net. Here, the guy stands behind the curtains while Akira sits directly in front of an open window. When she disappears right before him, it’s almost as if she had flown out into the blue sky. Here, a former teammate of Akira’s stands in the shadows whereas the heroine was just out in the sun moments earlier.

We later see a plane flying way up in the sky. We cut to a shot of the peaceful suburbs, which is of course contrasted with the heroine standing before the clouds (pictured above). It’s as if she’s looking down at the world… her old world. In truth, she’s standing on a hill, which would explain the perspective. Nevertheless, the “camera” pulls back and eventually pans up into the sky before the title comes onscreen. The sky is obviously very important to this story… whatever it’s supposed to represent. Freedom? Happiness? Infinite possibilities? It’s even all over the OP. The heroine and the manager soar up into the sky a la Mary Poppins.

Rain obviously doesn’t represent anything sad or depressing in this anime. At the end of the OP, both characters pull out a red raindrop and push them together to form a heart. As previously mentioned, an injury played a part in Akira quitting her team. But rather than feeling grounded or defeated, she seems to have been reborn as a different person — a person who is clearly different from her peers. Would she have the time and energy to work part-time at the diner if she is still on the team? Would she have ever met the manager if not for her injury? The rain is depressing to some people, but for others — like Akira — it obviously symbolizes rebirth. This is her coming-of-age. Whereas her friends all seem to fall in love with the same cute boys at their school, she has one foot already planted in the adult world. Fittingly, her first love is an adult man. We later get to see what that specific injury was.

When it starts to rain, the manager brings Akira coffee on the house. He even does a corny magic trick where he produces a small cup of milk out of nowhere. We jump back and forth between this scene and shots of her breathing in the scent from the manager’s used shirt. Then as she pours the milk into the coffee to turn it into a soothing brown color, the sun comes out and floods the diner with golden light. When she leaves the diner, the world outside is covered in drops of dew. Everything seems to sparkle as a result — it’s as if the world has undergone the same rebirth that she had gone through. Everything is glorious and pristine again. The heavens have opened up to welcome in our heroine.

Or if you want to be more lewd about it, here are some wet flowers to let your mind run wild. I’m not gonna spell it out.

At this point, I should probably address the elephant in the room. Yes, I wish this wasn’t about a girl falling in love with a man old enough to be her father. Granted, this sort of thing happens in real life all the time, but before I go any further with this anime, I have to admit my bias upfront. When the age gap is this big, there’s just an inherent power and experience difference between the two individuals. It’s easy for older men (and women) to take advantage of young, naive people like Akira. Sure, the guy she likes is probably a saint, because this is fiction. The manager is probably the nicest guy in the world, because this is fiction. But in the real world, the odds are poor at best.

Having said that, again, I have to reiterate that I don’t need to understand Akira’s feelings. I don’t need to understand why she likes this guy. We shouldn’t read books or watch films that only feature characters who walk in perfect unison with us and our beliefs. It’s important to see things from the other side. And for now, this is what we’ve got… we’ve got a young girl who’s in love with her manager. At the moment, that’s all it is, and I can take the show at face value. Like it or not, this is a glimpse into her heart.

Love is like after the rain… yeah, I still don’t get it, but whatever.

— We’re even animating the tiny specks of dust now? Someone’s a high roller…

— Uh, what the hell is with her neck?

— This girl almost looks like she’s from a different era of anime.

— I guess you can tell who’s ugly on the inside by how ugly they are on the outside.

— Seeing the burnt bibimbap, I have no clue what the nasty lady is complaining about. Of course he’s going to apologize to the customer when you serve them charcoal. On the other hand, the burnt food should’ve never been served in the first place. Whoever’s running the pass — the last line of defense — let the restaurant down.

— “He’s the type who’ll stay a manager forever.” As opposed to what? Other than becoming the owner, is there a position higher than manager in a small, dinky diner like this?

— Oh no, it’s starting to get all shoujo sparkly in here.

— Oh man, the guy she likes already even has a son. Girl, c’mon… I wonder where the kid’s mother is.

— The following day, Akira doesn’t even bat an eyelash at the school’s supposedly cutest guy. Well, he’s no middle-aged divorcee who manages a diner, I’ll tell you that much.

— More of that contrast I was talking about. Even when her friend walks up to her, they’re sort of separated from each other. She stands before an open door again while her friend remains framed within the school.

— Ah well, at least the show is gorgeous. You can hardly tell that she has a freakishly long neck from here.

— Awkward. Should’ve just taken it home to smell it later. But I’ve seen worse. In Call Me By Your Name, we have a similar moment, but the guy ends up smelling his lover’s boxers instead.

— Even though she got caught, I like how she just plops back down to enjoy the rest of her lunch. She’s brave enough to not just storm outta there.

— She tries to get his contact info, but he doesn’t even know what a social media ID is. Welp. They’re generations apart. Generations.

— When she leaves, Yoshizawa — the guy who had tried to hit on her at the start of the episode — suddenly runs up outta nowhere. He calls it a coincidence, but I’m not so sure. The manager sees all of a this, and for a brief seconds, he pictures himself in Yoshizawa’s shoes. He quickly closes the window when he realizes he’s being silly, but still, it’s just the first episode. Surely, as the story unfolds, he’ll increasingly begin the entertain the possibility of him and Akira as a couple, no? Ehhhhhh… that’s also a bit much, don’t you think? I’m not as old as the manager, and yet I can’t find anything remotely attractive about teenagers.