When we last left off, Theo and his trusty mage trusty mage Siluca managed to knock off some pathetic lord and claim his territory as their own. Now, a nearby lord by the name of Lassic wants a piece of Theo. This definitely feels video gamey and not in the good way.

I like how the OP doubles as backstory for Theo. He arrived in this new land all by himself, and that white horse was just like, “Ride me, bitch.”

Meanwhile, Siluca is busy advancing LGBT causes. Yeah, that’s right. I made the same joke on Twitter. I’m not funny enough to come up with two different jokes. 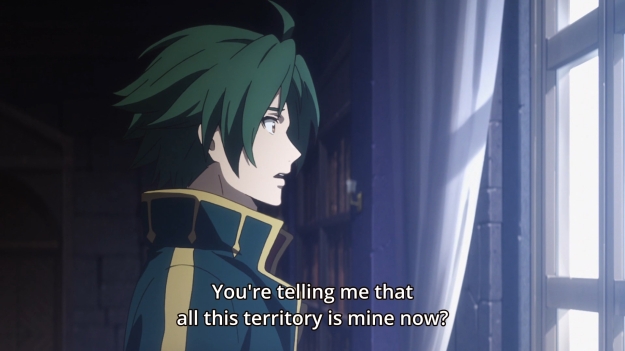 I like how this guy meets some strange girl for the first time ever, steals a guy’s territory that same day, and it still hasn’t sunken in what he’s done. 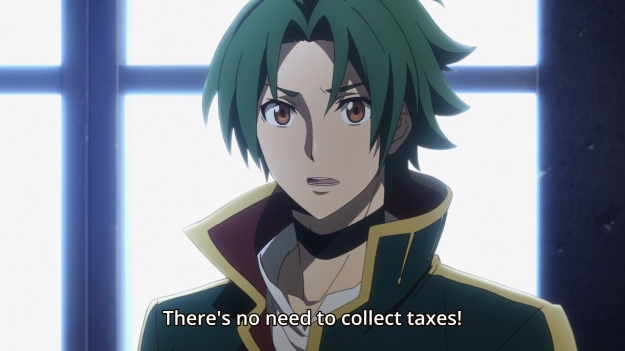 I suspect that using stilted dialogue to fill in a character’s backstory is forced and clumsy!

I’m so excited to see this whole map fall under Theo’s rule. Nothing is more exciting than conquest. 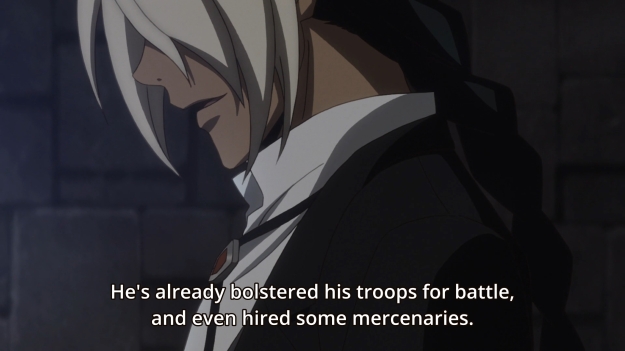 In the following scene, Irvin acts as Siluca’s sole intelligence-gathering agent. Everything seems to have come together. Theo randomly becomes a lord. Siluca becomes his chief advisor. And this guy heads up the CIA equivalent or whatever. People just  magically know their roles and fulfill their duties without any question or prior discussion. I wonder if he’s even had a single conversation with Theo. Probably not. He’s just happy to serve Siluca. None of these characters have strong, compelling motivations besides Theo (he wants to help his impoverished village). They’ve all just decided to put their fate in some fledgling young lord.

In yet another scene, we see characters stand around in a room, having the most scintillating discussions. This is the fourth scene in a row now. Four in a row. More exposition! We need more! Siluca wants to serve someone who resembles the legendary hero by the name of Leon!

Theo just accepts her reasons for serving him. Her reasons are… uh.. in any case, when he thanks her, she suddenly clutches herself like so. Maybe he makes her feel doki doki down there, and that’s the real reason why she decided to follow him. But she won’t admit it. Nor will he if and when he ever feels anything for her. 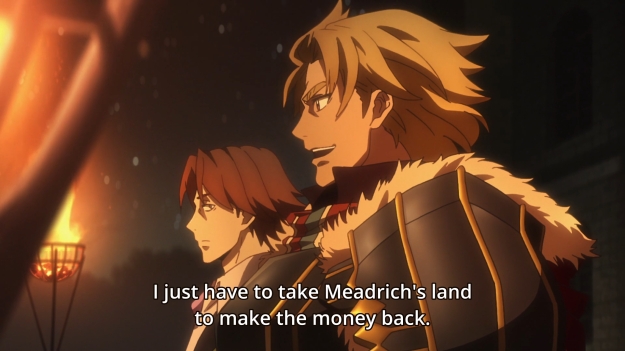 Fifth scene in a row in which characters stand around and talk. 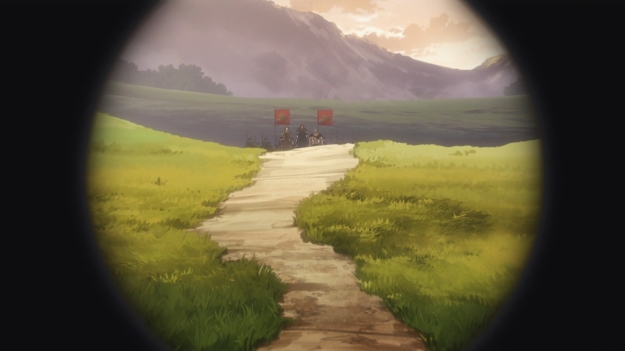 Finally, the day of battle arrives, and it couldn’t have come soon enough. I’m getting antsy here. 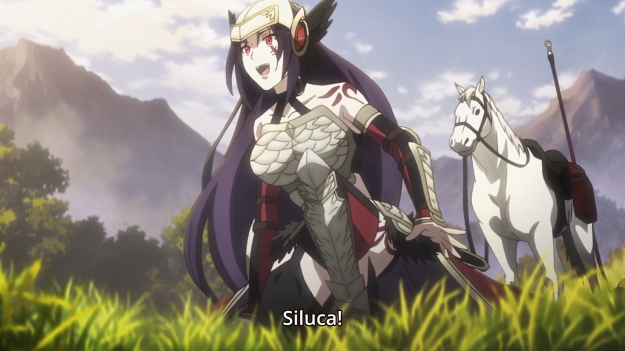 Siluca calls in a favor from an old friend: this Valkyrie-looking lady who seems to have a big woman crush on our heroine.

Don’t you love it when shows have to cut costs and it’s blatantly obvious?

The enemy forces sure do look menacing enough. But it’s okay, because we have Aishela. Like one of those stupid Dynasty Warrior games, one special character can take on an entire battalion of men by themselves. Speaking of which, I’m tickled that people are excited for Hyrule Warriors on the Switch. I’ve never liked those games, and I especially dislike weirdo spinoffs. 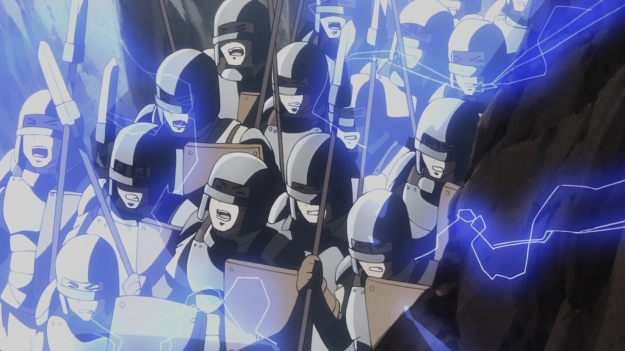 The battle begins and Siluca starts by channeling Pikachu.

Meanwhile, Aishela gets to fight this kind boi. Can you tell which of these characters is the special one?

It’s this guy! Why is she kissing him? Oh, no real reason. He just didn’t die instantly to her, so uh… she likes him? He’s also protective of his men, but somehow I doubt she cares about that. 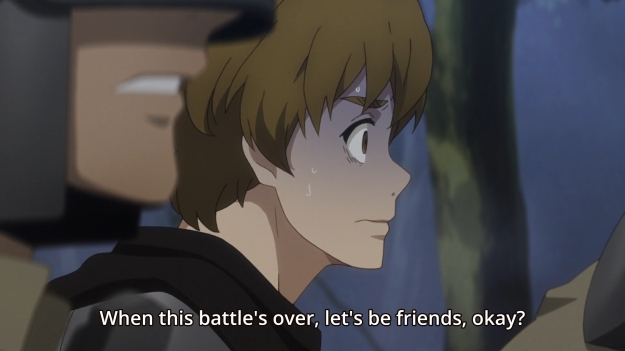 He looks thrilled to have caught her attention. I’d be thrilled, too.

Irvin fights Iron Man, and all it takes is a dagger to the eye. Makes sense, I guess. But it’s not terribly exciting.

Meanwhile, Siluca seems to have her hands full against the opposing mage Moreno. Luckily, her dashing hero comes to her aid, and both men engage in another low budget action scene. Eventually, Theo comes out on top, but we don’t get to see how. In a following scene, he just confronts Lassic with Moreno as his hostage. And with that, Lassic throws down his sword and surrenders. Really. No, really. The battle is over. 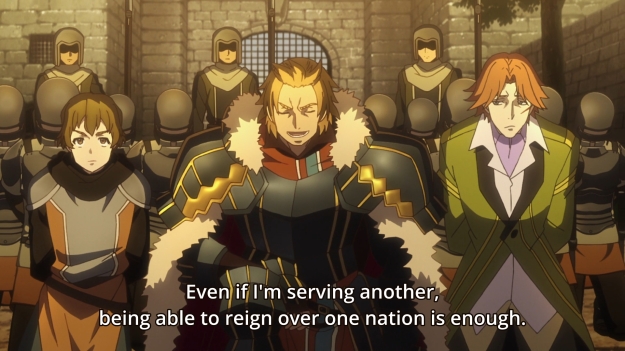 Lassic explains that he’s a follower. He wants to conquer the world, but it’s okay if he’s doing it under someone else’s orders. And that’s it. Just like that, Theo gains even more territory and another crest.

After the credits, some creepy Oedipus boi threatens to punish Siluca. Yay… I dunno, man. On the one hand, this anime is dumb and simple enough. It only takes me maybe 15 minutes to churn out these lazy, low-effort write-ups. But at the same time, it doesn’t have anything to tear into like Killing Bites. Record of Grancrest War is just dull. It’s like flavorless gruel. Maybe I’ll call it quits after one more episode depending on how the rest of my winter schedule shakes out.