And you certainly can’t do it well if you’re easily embarrassed. In this week’s episode, we finally get to see what it looks like on the inside of a FranXX. After putting on an incredibly skin-tight suit that apparently needs to be “painted” onto your body, the pistil then dons a large helmet that has a screen on the back. She then assumes a position on all fours. A device around her waist activates and dual controls jut out. The stamen is seated upright behind the pistil and grabs hold of the dual controls. The two partners then proceed to connect. The pistil’s buttocks light up. Her spine lights up. The monitor on the back of her head lights up. According to their instructor, “If two partners are even slightly out of sync, their para-capacity will fluctuate wildly. The key is to trust your partners and accept them wholeheartedly.” So… it’s essentially doggystyle except without all the good stuff.

I mean, let’s face it, our minds can only connect during sex if our bodies are also compatible. If it doesn’t feel good, then you can’t trust your partner. And if you can’t trust your partner, your bodies won’t be in sync. For all of these kids, connecting with their partners still feels weird. But hey, that’s understandable. Sex is kinda weird the first few times, too. Hiro hasn’t been kicked off the squad, but he’s not yet a parasite, i.e. a pilot. HQ wants to test his abilities individually, so they let him participate in a mock battle. Unfortunately, he won’t get to ride with Zero-Two this time. Ichigo, the childhood best friendly, quickly volunteers herself to be his partner. Not only does she want him to succeed, she also wants him to succeed with her. She wants him to succeed without that demon temptress. But unfortunately, as much as she might like him outside the bedroom, they have no chemistry in it. Hey, it happens. You can meet someone awesome, but just have no sexual compatibility.

This alternate universe is a strange one. For instance, none of these kids are familiar with the act of kissing. Well, aside from Zero-Two, that is. Oh, our demon girl is all about body compatibility. When Ichigo tells the pink-haired girl to stay away from Hiro, the latter has a quick taste of the childhood friend and determines that, yes, childhood friends are sweet. Meanwhile, we see mysterious individuals gather in a room — and in mecha anime, when do they not — to discuss very important matters. One of which is how Plantation 13 is low on fuel, and should commence “kissing” with Plantation 26. Oh no, kissing is such an awesome activity. What has it been reduced to in this strange universe where sex has become a video game? The kids assume the position within their respective FranXXs, but their bodies never actually touch. Where’s the fun in that? At least Hiro got a kiss. But since we don’t know what else happened in there, he might have gotten more.

As you can easily imagine, Hiro’s attempt to partner up with Ichigo fails disastrously. They just don’t have any compatibility. She’s a very nice and caring girl, and her actual partner Goro seems to reflect that. He, too, is very support of Hiro. While the other kids find connecting weird, Ichigo’s connection with Goro actually puts her at ease. I can see why those two have enough affinity to connect with each other. But although Ichigo appears to harbor deeper feelings for Hiro for reasons currently unbeknownst to the audience, it is clearly not mutual. Hiro’s primary concern is to fly. Beyond that, it’s hard to say what else he truly cares about. He clearly is oblivious to how Ichigo feels about him. He sees her as a friend and nothing more. To be fair, it’s also hard to say why he and Zero-Two appear to have that certain je nais se quoi. Why does he click with her and not with Ichigo? Well, they appear to be kindred spirits since they are both loners. Also, he doesn’t judge her and her horns when everyone else clearly does. Then again, two people can just click. Sexual chemistry can be weird like that. 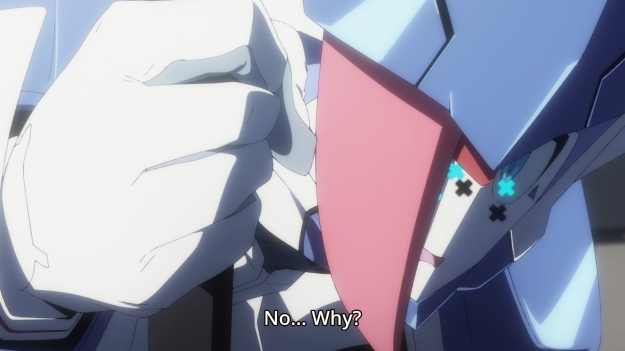 Opposite Hiro and Ichigo are Zorome and Miku. They both seem to have loud, boisterous personalities. Zorome takes offense at the idea that Hiro can partner up with Zero-Two and play the hero. He seems desperate to be the star of the squad even though he isn’t the squad leader. As such, he volunteers himself and Miku to go up against Hiro and Ichigo in the mock battle. Hiro and Ichigo’s partnership quickly falls apart, because he just can’t seem to connect with anyone other than Zero-Two. But at the same time, he can’t actually remember piloting the FranXX. He only remembers entering the cockpit and being kissed by Zero-Two. As a last ditch gambit, Ichigo tries kissing him. Again, why not her? She can be just as good a partner as Zero-Two, right? But Hiro feels nothing. Ichigo wants to protect him, but he doesn’t want to be coddled. She doesn’t get why he’s so desperate to fly. She doesn’t get how lonely he truly feels. She just doesn’t get him. At the start of the battle, Ichigo tells him to just focus on connecting and leave the rest to her. It doesn’t feel like she trusts him all that much. She’s not helping him prove himself to HQ. She’s just doing this for herself. And maybe now, after their abject failure, Ichigo can finally swallow that bitter truth.

He didn’t kiss back, did he? Besides, her “trembling lips” apparently filled him with guilt. There was no enthusiastic consent here, boys. Abort, abort, abort. Anyways, I don’t know about you guys, but I still enjoy the hell out of this show. It’s not brilliant by any means, but I don’t think it’s objectively bad. The sexual metaphors are as goofy as they are obvious, but I don’t really mind them. It seems, however, that I am in the minority on this.

— I don’t care for the OP. The song tries to be sensuous to match the anime’s themes, but I really dislike the singer’s voice.

— Ichigo and Goro pilot the Delphinium, and this duo appears to set the standard for the rest of the group. From the outset, they certainly do seem to be the most mature couple. Ichigo’s latest meltdown over Hiro, however, might a throw a wrench into things.

— Miku and Zorome command the Argentea. The guy seems to have a bit of an Napoleonic complex. He obviously thinks he’s hot stuff, and it didn’t help that Zero-Two treats him like a piece of napkin. On the other hand, Miku is talkative, but I don’t know much else about her. She still seems nice? When Zorome stupidly suggests aloud that maybe he should pilot the Delphinium instead, the trust between them is shattered. That’ll probably be a major subplot in next week’s episode.

— Kokoro and Futoshi ride the Genista. I don’t know much about them, really. They seem like generic anime archetypes for now, i.e. these two are probably warm, friendly characters that tend to avoid confrontations.

— Same goes for Ikuno and Mitsuru, the pilots for Chlorophytum. There isn’t enough time in one episode to flesh all these characters out, but the guy seems to help goad Zorome into doubting Hiro even more than the latter already does. If we’re talking generic anime archetypes, these two are probably aloof and cold on the surface.

— Who is this for? I thought Naomi at first, but then we are later told that she’s recovering from her injuries in the hospital.

— Ichigo tells Hiro that Zero-Two’s partners can only last three flights. But hey, 3 > 0.

— Zero-Two really likes her honey. It’s made from flower nectar, after all. It obviously symbolizes sexual fluids and all that jazz, which disgusts Miku. And yet, the twin-tailed girl seems to enjoy her banana.

— It’s weird how they all talk about Zero-Two as though she isn’t within earshot.

— Zorome just walks up to Zero-Two and volunteers to be her partner even though he already has one in Miku. That can’t be good for the girl’s self-esteem.

— Mitsuru gulps down some milk. Milk and honey, huh?

— Does the term “Sunday best” even mean anything in this universe?

— These kids don’t know what a darling is either.

— Here’s Nana, some lady who will watch over the kids.

— “…it seems to be a rare sample without signs of physical aging.” All the parasites are kids, but Zero-Two’s last partner appeared to be an adult. Is he implying what I think he’s implying? That Zero-Two ages her partners, but Hiro is somehow immune to this side effect?

— “With no established cause, mixing with the special specimen will taint her blood.” Why would her blood be affected from just partnering up with someone? Or are they perhaps talking about future offspring?

— Futoshi seems to have food hidden even in his locker. Look at him greedily munching away right before a training exercise.

— How can you go from this to this? Flat as a pancake. What a travesty.

— As if connecting wasn’t an obvious enough metaphor for sex, here’s how Miku describes it: “It’s like your body being stirred up from the inside.”

— How come the other FranXXs all have the same face? I wonder if Dr. Franxx modeled them after someone important to him. They also seem to model a bit of their looks after the female pilots. For instance, the Delphinium has that one bang covering its right eye like Ichigo. And the Argentea has twin-tails.

— These FranXXs are all in their human forms, too. Hell, who’s to say that they even have a second form? Maybe Strelizia is the only one that has an animal form due to its pilot.

— Zero-Two sniffs at Ichigo like how an animal would approach someone. Well, she’s beast-like, I guess.

— Ichigo calls herself the leader of the squad, but she doesn’t keep Zorome in check. Isn’t that part of a leader’s responsibilities? He has obviously been picking on Hiro, and he’s just a jerk in general. And yet, the best she can say to Hiro is, “Don’t let him get to you.” That has never helped.

— The way I see it, Hiro is meant to fail. It’s silly to measure someone’s aptitude with someone they’re not comfortable with. I can’t exactly get an A on a project if I have to work with someone I don’t work well with.

— Zero-Two: “I’ll let you have him this time. Go for it.” It’s like she knows Ichigo and Hiro can’t do it, so she has no cause for concern. She’s almost taunting the girl.

— The look Miku gives Ichigo also implies that she wants to upstage the top girl in their squad.

— Sex is apparently an acid trip.

— They’re fighting with such itty-bitty weapons.

— This should be considered a failure for both teams, no?

— And Zero-Two simply walks off with a smile.

9 thoughts on “DARLING in the FRANXX Ep. 2: You can’t do it without intimacy”