I thought about writing every post from the main character’s point-of-view, but even a Bargain Bin Kirito is too manly for me. So back to normal posts we go! 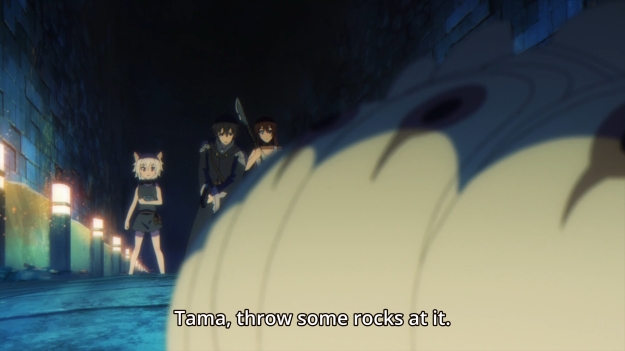 The episode opens with Bargain Bin Kirito micromanaging his slaves. Yes, his slaves. Let us never forget that he literally owns these poor girls. In fact, they would be emotionally devastated without him! Throw rocks! Distract the enemy! Jab once! Collect cores!

Our max level hero has to let the girls do all of the work because he’s still pretending to be a weakling. Why? So he doesn’t stand out, but I don’t believe the story has ever adequately explained why he feels that this is necessary. Maybe he doesn’t want the burden of having everyone depend on him. Maybe he thinks they would distrust him. Either way, we have Ainz who embraces his godliness, and we have Bargain Bin Kirito trying his damndest to pretend that he’s an everyday slave owner.

Oh good, I get to watch these girls level up gradually. That’s always exciting. 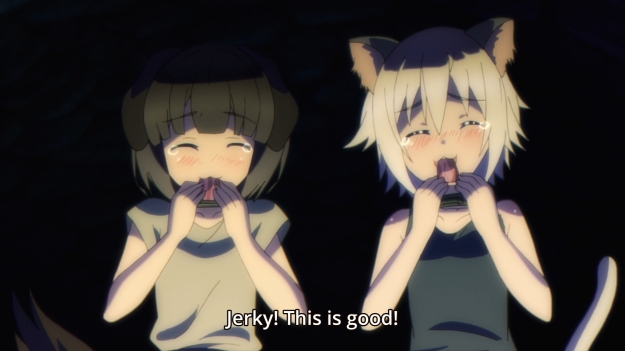 Then I get to watch them go nuts over jerky. Isn’t that sad? They’ve probably had nothing but trash to eat all their lives, so jerky is like fine dining to them. They should swing by my office. We’ve got all sorts of jerky. Peppered jerky, teriyaki jerky, you name it! Buncha health conscious freaks have stocked our pantry with nothing but shitty health bars and jerky. 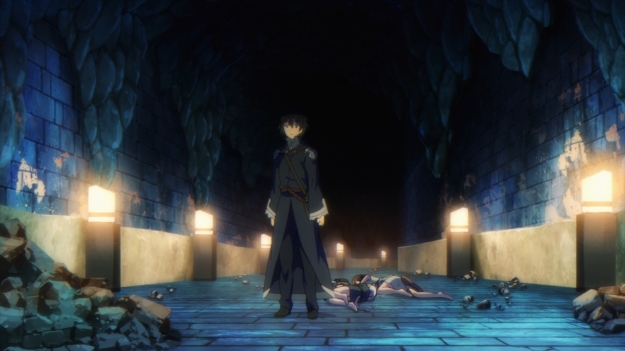 Unfortunately for these girls, Bargain Bin Kirito didn’t think to drop by Seiryu City’s Bed, Bath & Beyond. Sleeping on the floor of a dungeon must suck. Anyways, it’s time for a montage.

Raticate is weak to lightning (not really)! 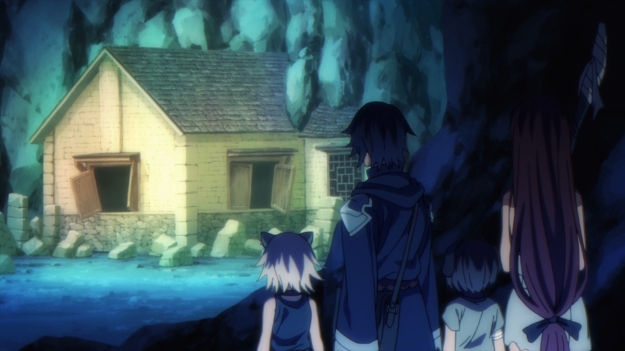 A house deep underground for no apparent reason!

Full of books! Eventually, Lizard Girl suggests that she cook up one of the monsters they’ve killed. 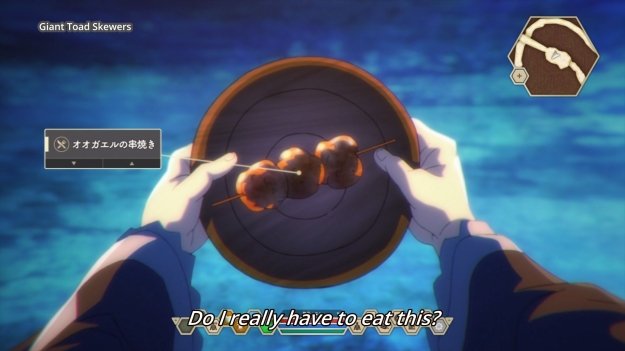 Like chicken, he says. And apparently they are bland because the only seasoning at their disposal is salt. I’m sorry we don’t exactly have paprika and exotic Himalayan salt down here, goshujin-sama.

Oh yeah, our slave owner has to give his slaves permission to eat. Okay, now that we’re done eating, what’s nex–… 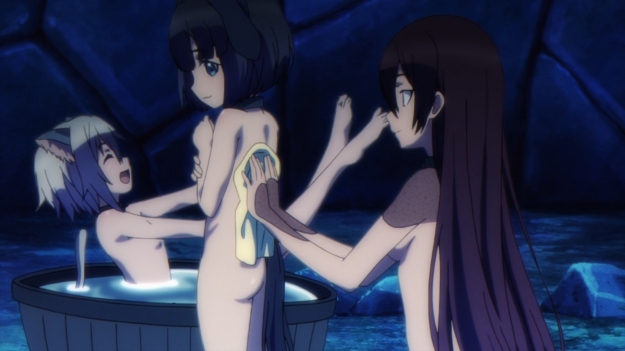 OH FUCK IS THE FBI OUTSIDE?

Nevermind, they’re too busy fighting with the White House. Phew. Back to pretending I’m not a lolicon.

Eventually, Bargain Bin Kirito comes across a slime mob. Every RPG ever has taught me that slime mobs are weak to magic and especially fire. But apparently, these slimes are different. 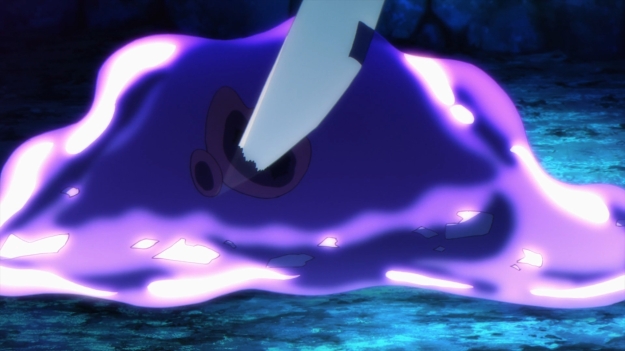 They do retain their weakness to piercing damage, at least.

I’m not exactly sure why Bargain Bin Kirito is struggling unless he’s actually pretending to be struggling as well. 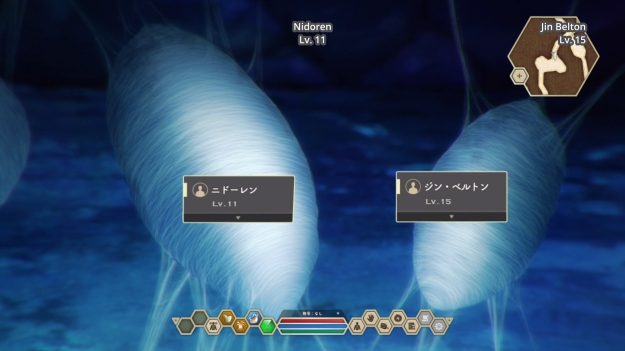 After the undead beast, the party comes across NPCs trapped in spider webs. 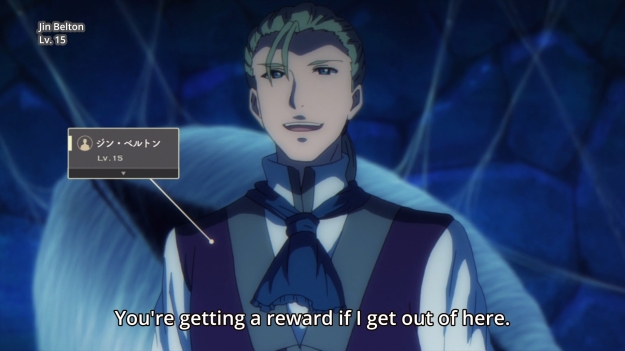 Naturally, the NPCs emerge from the cocoons completely sound in mind and body. After all, this is an MMORPG, so I guess that makes sense…

Oh hey, the jerk who had picked on the slave girls in episode 2 is back! How did you even get stuck down here, buddy! Were you one of the assholes trying to stone them last week?

I like how another NPC is straight up a slave trader. Nobody bats an eyelash. I know slavery is a part of this world, but Bargain Bin Kirito isn’t. Doesn’t he find this an affront to everything he’s learned in his world? 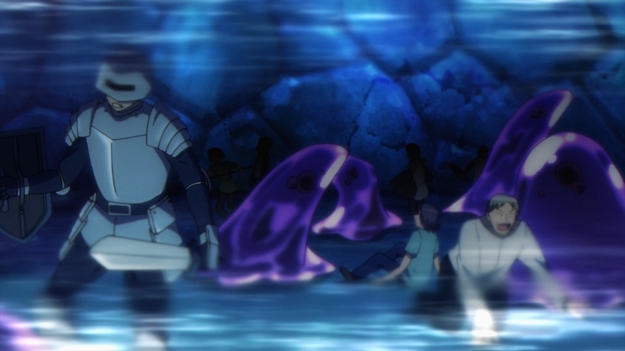 Finally, Bargain Bin Kirito reaches a group of soldiers trapped in a room with more slime mobs. Of course, we’re too cheap to actually animate anything. We’ll just slap some ugly Vaseline-like filter on the screen. Also, if you’ll recall, Zena is with these guys. 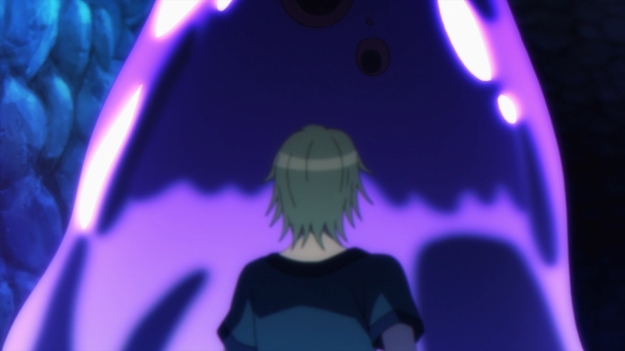 That jerk from earlier still got freed by somebody, but I’m not sure who. He then proceeds to get owned by slimes, so the slave girls have to step in and save his ass. 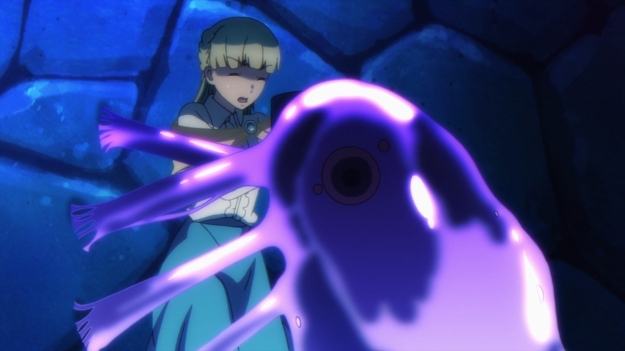 Oh hey, it’s Zena, and she’s pinned to the wall by a slime… mob… oh dear, I know how this will end. 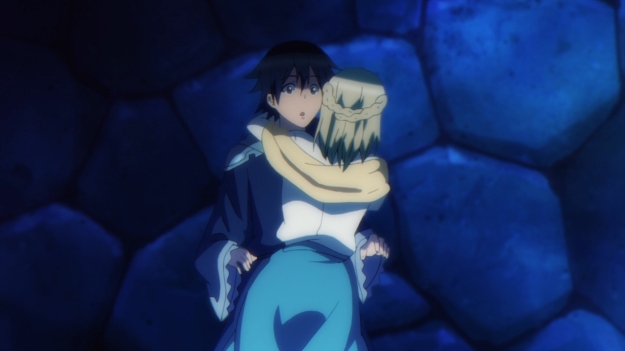 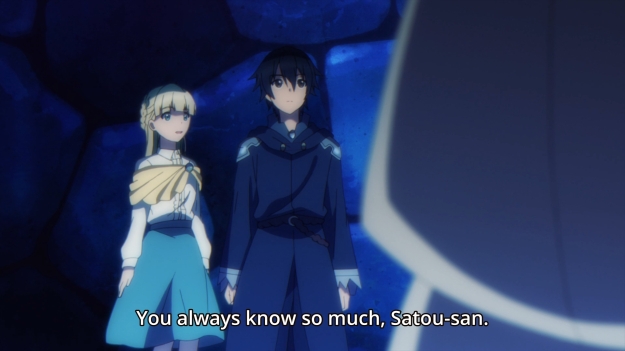 I like how Orna and her soldiers don’t know how to defend themselves against the slime mobs, but the beast girls do. The world-building feels… arbitrary.

Then again, these NPCs aren’t particularly bright. In the background, you just see a group of soldiers banging against a giant iron door with their weapons. Keep at it, boys! It’ll open one day!

Another group comes across a conspicuous-looking chest, which is so obviously a mimic. 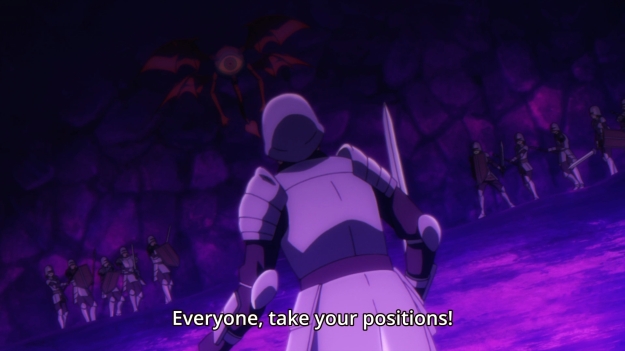 And now, we have ourselves a raid boss encounter. Main tank grabs the boss! Offtank on the lookout for adds! And trust me, if you stand in the fire, I’m going to kick you from the guild!

So in this anime, everything is about food. When the ahriman confuses everyone, they end up seeing their own party members as giant hunks of meat. 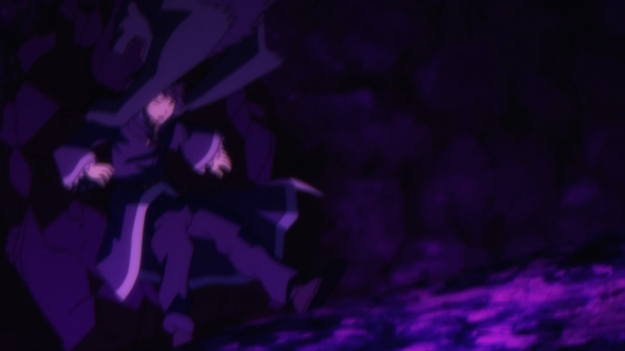 Bargain Bin Kirito desperately wants to help, but he also doesn’t want to blow his cover as an unassuming merchant, because…? In any case, he allows one of those undead beasts from earlier to tackle him through a fake wall…

After killing the beast with one blow, it’s time for Bargain Bin Kirito to assume yet another facade… 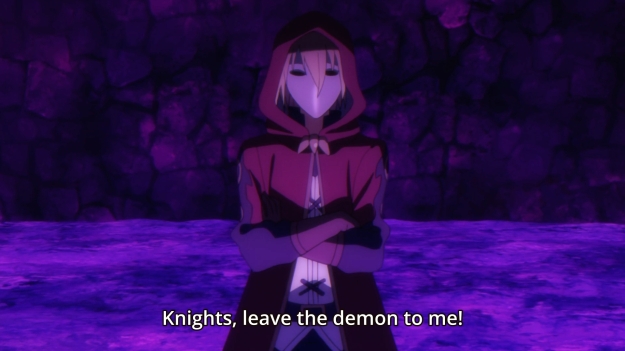 …yes, it’s Masked Bargain Bin Kirito! Such creativity! And he’s beating the raid boss with nothing but rocks! 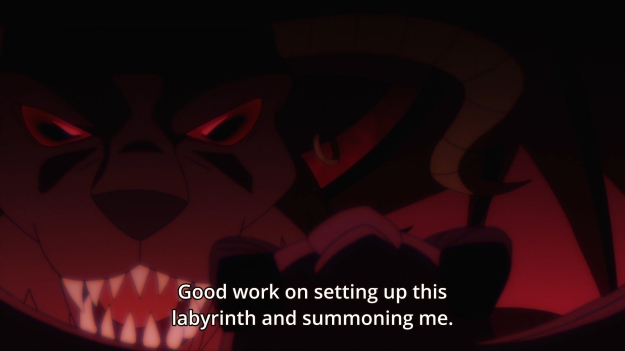 As the ahriman goes down, a demon lord appears in its place. Wait, we’re up against the demon lord already? But what are we going to do for the rest of the series, then?

Not only that, the demon lord is only level 62. Our hero’s at max level, and with his disguise, he doesn’t have to hold back. This is going to be a breeze. 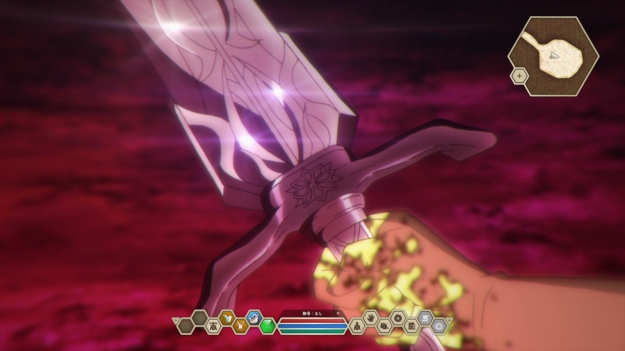 Apparently, the holy sword won’t work for Bargain Bin Kirito. I guess he’s not the chosen one… yet.

So instead, he’s just going to simply max out one of his spells…

…and voila! So the key here is to equip the correct title. Yes, you need magic or a magical weapon to hurt demons, but you also need to have the proper title affixed to your character for the demon lord. Have any of you ever played an RPG with this sort of setup?

And now he gets the Demon Slayer title… boy, that would’ve been useful about five minutes ago. 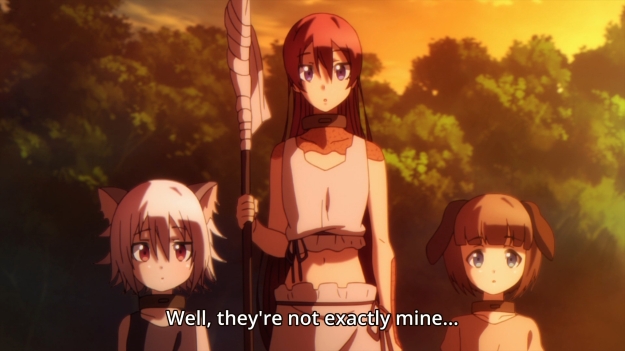 Once everyone has escaped back to the surface world, some guy asks Bargain Bin Kirito if those demigirls are his slaves. Oh no, is he rejecting them?!

But you know Bargain Bin Kirito can’t find it in his manly Kirito heart to abandon a bunch of servile lolis. 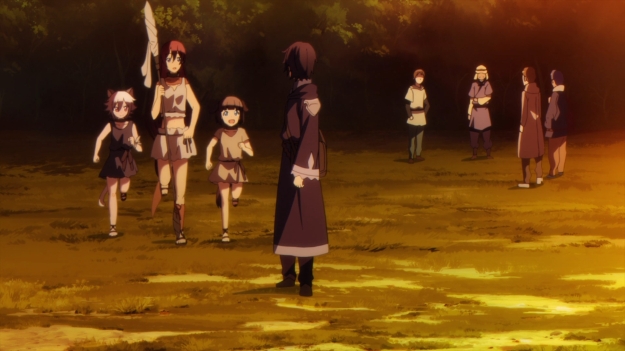 Just look how happy these girls are that they get to belong to some teenage boy. 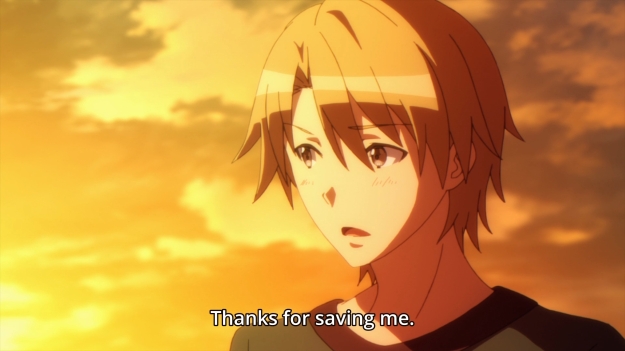 And look! The big, bad racist now feels bad! See? If someone is ever picking on you for your race, gender or what-have-you, just get trapped in an RPG dungeon with them and save their ass from slimes!

Your bully won’t be so tough if he’s about to delevel in a dungeon.

Afterwards, Bargain Bin Kirito makes it official: he definitely owns these girls now. Phew, I was getting a little scared there. Wasn’t sure if he was going to have full control of these lolis or not for the rest of the series. Nevertheless, the anime reminds us that he is truly the hero of the story. Don’t believe me? Check that title, son. That makes it official.

Yaaaaaay. But wait… are there perhaps more loli slaves to own and boss around to my heart’s content?

OH BUT IM NO LOLICON TRUST ME

Should I know who this girl is? Anyways, that’s the episode, you guys! Come back next week to find out if Bargain Bin Kirito manages to add more cute and fragile-looking loli slaves to his collection!

8 thoughts on “Death March to the Parallel World Rhapsody Ep. 4: Where a grown man gets to pretend to be a teenager and own female slaves”