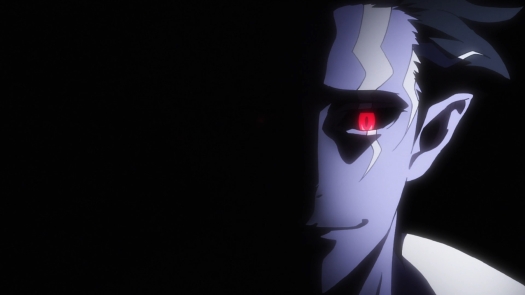 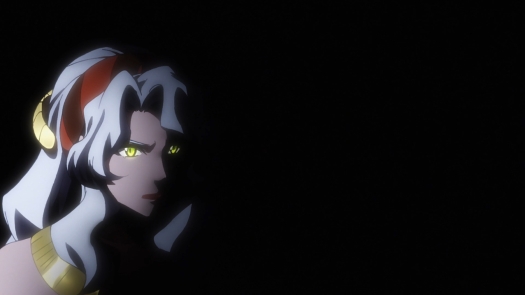 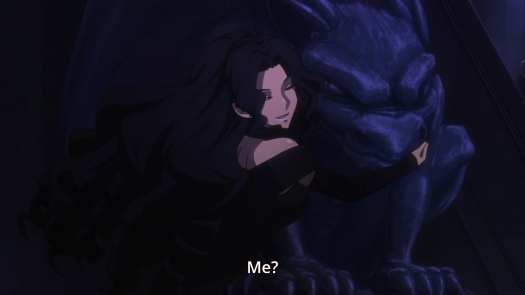 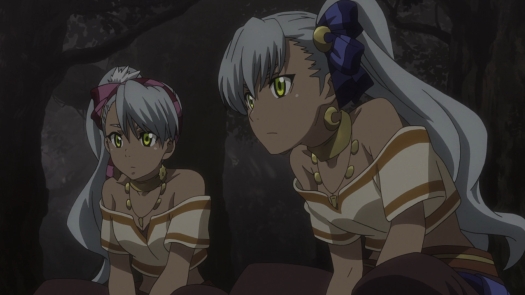 Whoever these two are? Am I still watching a show about Theo and Siluca? 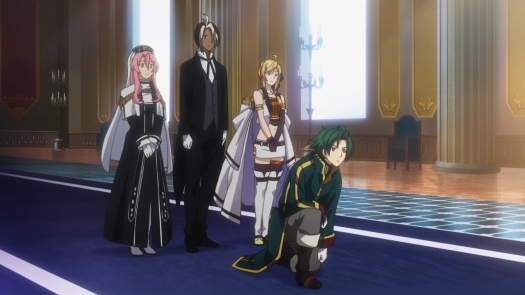 Yes, yes I am. Of course, we’re in a new arc now, so it’s about time we introduce some new characters to the story. Still, it is a bit jarring to suddenly see vampires, werewolves, and witches. After all, aside from that short bit with Diabolos in the very start of the very first episode, we’ve pretty much kept the focus on humans and human affairs. As for Theo, he’s been relegated to guard duty. What a huge step down from leading an army. 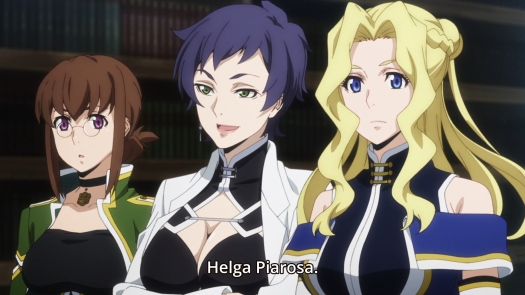 We also meet Villar Constance’s other mages. I could learn their names, but knowing this anime, they’ll probably be killed offscreen. 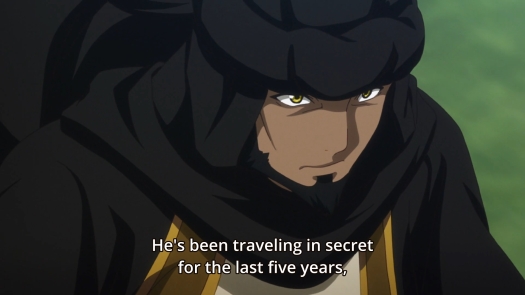 The episode continues to throw new faces at us. If Record of Grancrest War does a good job incorporating them into the story, I’m sure I’ll keep them all straight in my head. 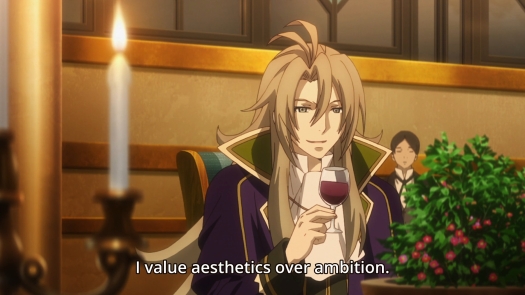 There’s some talk about who might become the next emperor. Let’s just hope Villar means he doesn’t want to become an emperor if it means he has to dirty his hands. 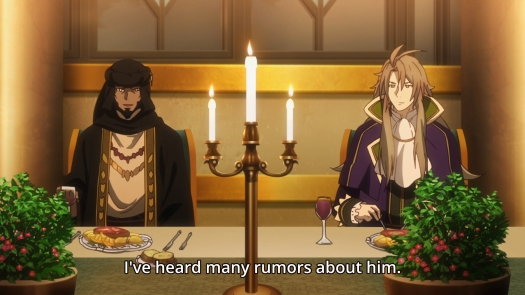 Also, Theo’s gained a bit of notoriety for sacrificing his rank just for Siluca. I don’t know how important a viscount is supposed to be, though. If you tell me it’s higher than a baron, that doesn’t help either. Sure, I could look this up on the internet, but isn’t it the story’s job to make these things clear to me? I’m just saying… being a viscount is apparently a big deal, but I have no proper frame of reference from which to work with.

Anyways, the new guy looks down on Theo, because he has no respect for someone with no ambition. Oh man, if only he knew how useless Theo is without Siluca. He can only hope to achieve his ambitions if he has her by his side. I don’t give Theo credit for much, but keeping Siluca is the smart move. 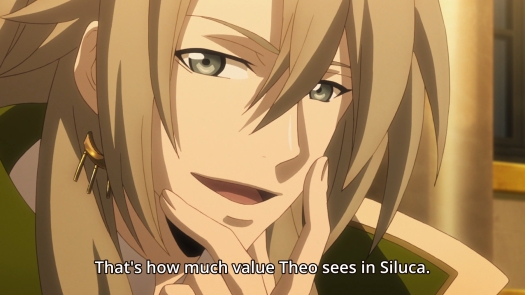 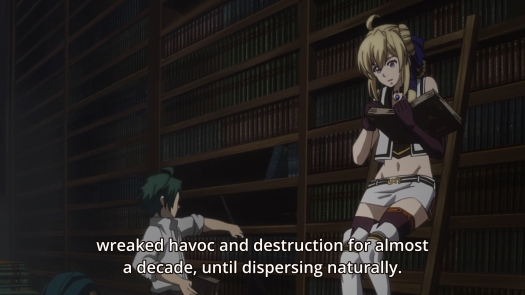 Nor is it interesting to watch Theo dust a bookshelf while Siluca fills us in on this universe’s lore. It’s just such a transparent way to get us up to speed on vampires, werewolves and witches in a not-so-exciting manner. We then cap it off with Siluca once again believing in Theo’s ability to rally his people. I know why he believes in her. I have no clue why she believes in him. 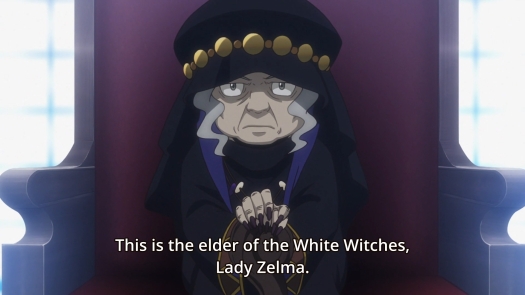 More new faces. Black witches, white witches, rainbow witches, we got all dem colors. The old lady comments on Siluca’s clothes, which the girl is supposedly used to now. If he’s so not a pervert, then why did he want her to wear such a skin-baring outfit in the first place anyway? Anyways, Theo and Siluca finally have something interesting to do. Villar sends them to investigate the Forest of Eternal Darkness. Bad blood is brewing between the vampires and werewolves, and that’s probably because that witch from earlier did something to those two girls. 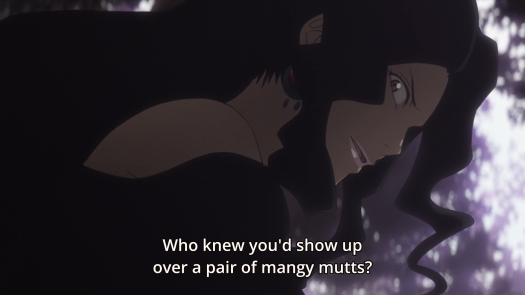 Hm, yeah, it’s so crazy that people would try and save their offspring. What a concept. 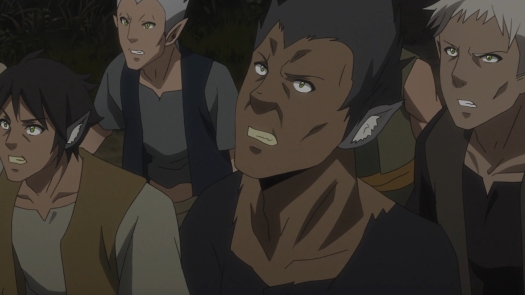 And now we have an entire forest full of people trying to growl like wolves. It sounds really lame. I mean, it looks pretty lame too. They all look constipated. 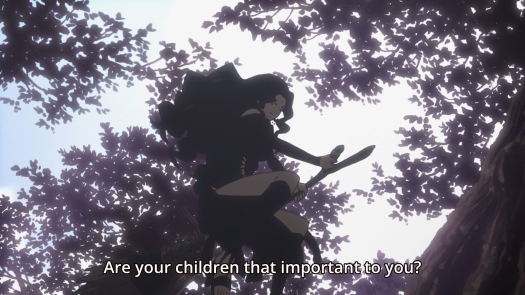 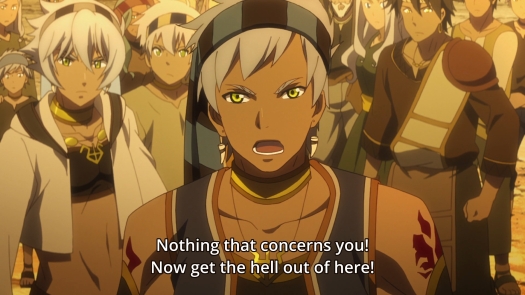 Afterwards, Theo and Siluca arrive to offer a helping hand, but of course, the werewolves act like jerks. I dunno, it just feels like them creating drama for drama’s sake. I thought Siluca just read an entire book about Artuk treating the werewolves well, so I don’t even see a strong story reason for why they’re being so cold to Theo. 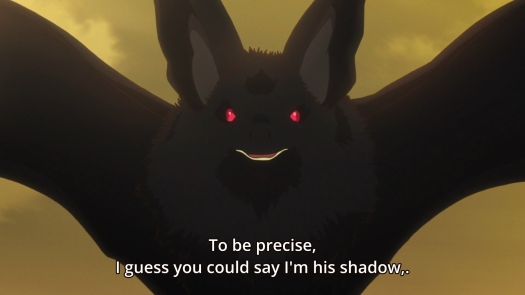 On the other hand, the Vampire King is all too eager to greet our hero and his trusty mage. 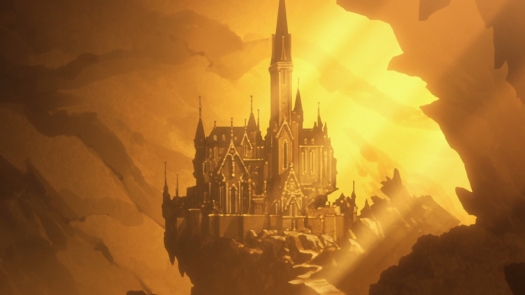 Vampires always live in sick ass castles. One castle for each vampire, too. I dunno how they manage it. The upkeep must be insane. Also, peep that sick organ music. I love how Bach’s Organ Toccata got associated with Dracula, and it just stuck… forever. Even if a movie or show doesn’t play the same song, you can bet your ass it’s playing an organ. 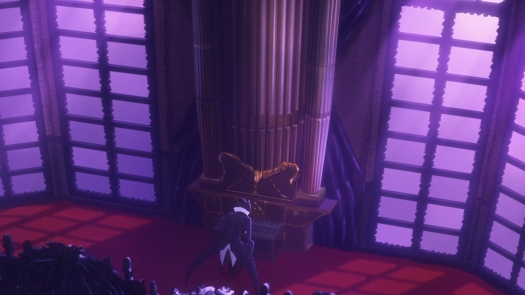 You can’t be a legit vampire if you’re not jamming away on an organ in your castle with enough purple aesthetic to make Prince blush. Hell, Prince was probably a fucking vampire too. 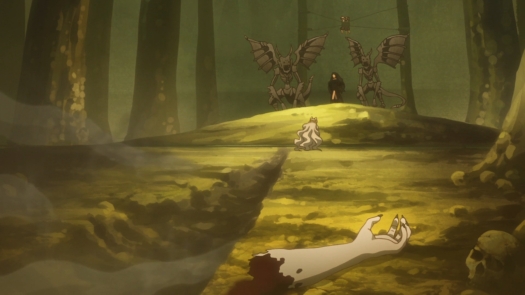 On the other hand, the Werewolf Queen… 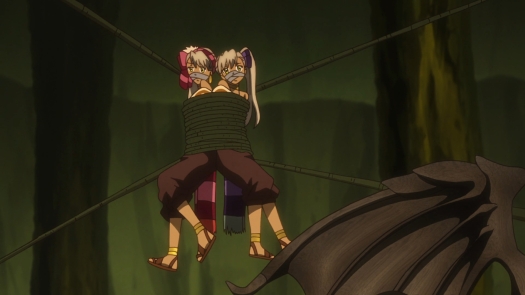 …and her daughters aren’t doing so well. More than halfway through the episode, and I still don’t know why Yana hates these werewolves so much. I guess we’re supposed to be just as clueless as Theo. 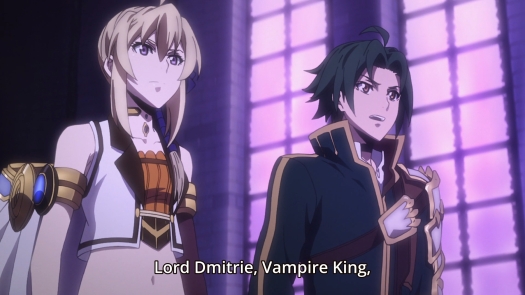 Of course his name is Dmitrie. Odd spelling, though. We learn through yet another conversation that he intends to plunge the world back into darkness or whatever. This is because if all the crests unite, then something lame called the Emperor’s Crest will emerge. When this happens, Chaos will disappear from the world, and this means vampires and werewolves would lose their powers. Well, I suppose everyone has a right to fight for their existence, right? Siluca wonders, however, if Dmitrie was the once responsible for the massacre at the start of the whole series. Anyways, the Vampire King doesn’t wanna fight. He just fucks off into a colony of bats, but right before he leaves, he points our heroes towards Yana and the Werewolf Queen. 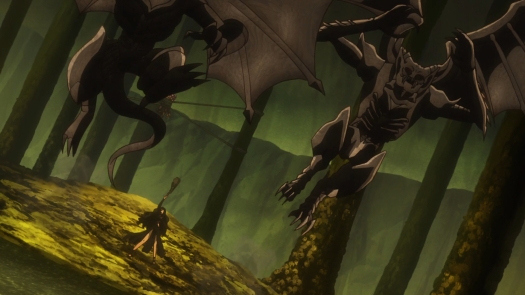 So this all takes place within the “cellar” of Dmitrie’s castle. At least… that’s what he claims. How exactly is this place lit right now? Where is the light source coming from? Is it weird to be concerned about that? Also, this is a huge damn “cellar,” I’ll you what…

Well, finally some action that isn’t a battle between two armies with bad CGI, but y’know… this isn’t much better. 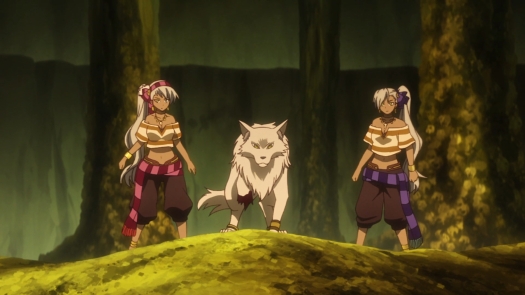 In the middle of all the chaos (har har), the three-legged dog frees her daughters. Now that it’s like… five vs three, Yana decides to run away from the fight. So nothing’s resolved yet, but I guess Theo and Siluca have managed to repair Artuk’s social link with the werewolf clan? 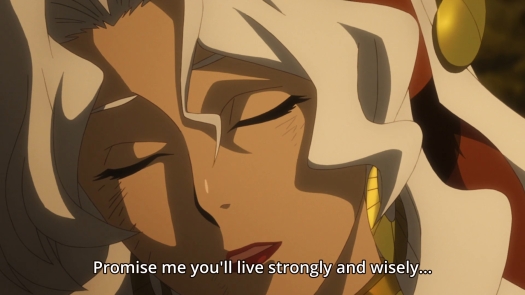 But unfortunately, the Werewolf Queen hangs on just long enough to say one final line then immediately dies. Welp. She was barely a character, and yet, she’s already gone from the story. Maybe if she didn’t try to lunge at Yana one last time, she could’ve survived. 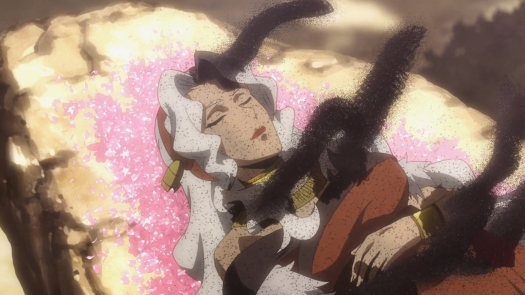 In fact, it’s kinda gross when she dies. And only now do I learn that her name was Clara. Great. 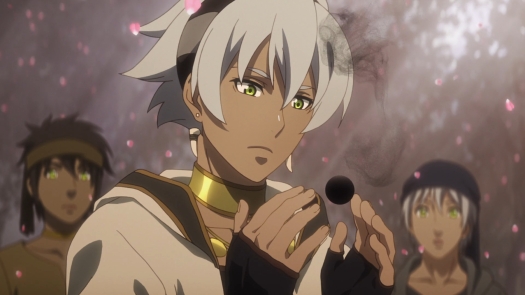 Eventually, the black miasma splits into a bunch of black spheres. I imagine one goes to each of her kids. What does this do for them? Shrug. Also, the Vampire King has left for real. I… I don’t get it? I suppose he feels that if he stuck around, the werewolves would go after him after what Yana did to Clara. But then he gave Yana permission to run free and do whatever she wanted, did he not? So what was the point of all this? Why not just hold the black witch back so he can continue staying in his castle? Or am I missing some crucial bit of information that the adaptation didn’t bother to provide? I know Yana goes after the Werewolf Queen because she thinks that the werewolves would eventually attack Dmitrie, but what did he think would happen next? Why did he then invite Theo and Siluca and point them towards Yana? Was he trying to rid himself of her? Ah well. No point getting to worked up about Record of Grancrest War.

Afterwards, Theo and Siluca both resolve to become stronger. Theo reasons that there are battles he simply cannot afford to lose. Isn’t this a conclusion he should’ve reached from the very start? I also like how they’ll get stronger by facing “challenges” in the Forest of Eternal Darkness. It’s just like a prime leveling spot in an RPG or some shit. Yeah, mobs give great EXP here! Also, Theo seems to have gained some new party members… 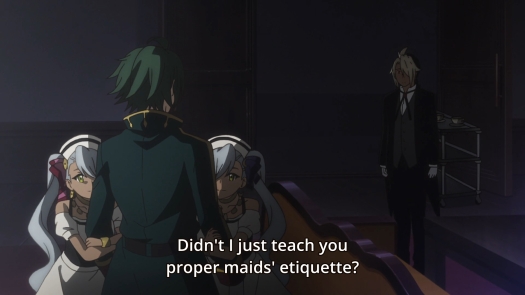 …oh for fuck’s sake. Not you too, man. Are you trying to pull a Death March on me as well? Also, I wonder how these girls’ remaining family must feel. “Welp, mom died to save you guys, and now you want to be some asshole’s loli maids. Great.” I mean, you could argue that I should’ve seen this coming if I had paid closer attention to the OP, but why the hell would I wanna do that?

Anyways, I guess I enjoyed this episode more than the last three, but does that really say much? Nah.

2 Replies to “Record of Grancrest War Ep. 5: Back to fairy tales”