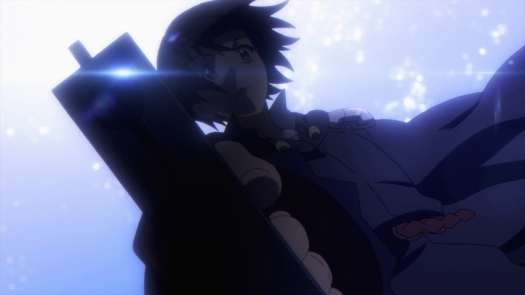 It’s fun to hate on Sword Art Online, but Death March somehow manages to be worse in every possible way. How? Well…

— So what’s on the itinerary for today? First up is finding suitable housing for Bargain Bin Kirito’s lolis. Naturally, Zena wants to tag along. Doesn’t she have anything better to do than to spend all her day with a lolicon? Apparently not.

— Whoa, too old! Put her back in the closet!

— So where can he live? According to the real estate agent, if BBK wants to house his lolis, he’ll have to do it in the ghetto.

— This dormitory might look like it’s too big for just one lolicon and a few of his girls, but obviously, you want a home that has expansion potential. Unfortunately, BBK passes on the place because he’s scared of a little assassination. Chicken.

— He rejects another place because it’s right next to a brothel. After all, you wouldn’t want older women distracting him from the purity of lolis.

— Aaaaand we’re back to shopping.

— Unfortunately for Zena, BBK can’t even turn a corner without bumping into his lolis. Such is the life of a 29-year-old Japanese programmer.

— Visually, this anime is so boring. BBK’s loli slaves will tell him all about how they’ll buy stuff for him, and the entire time, we’re staring at Zena. Yep, just a static view of Zena smiling.

— Boring scenes of a play follow our extremely short shopping trip in which BBK ends up buying Zena a pair of tacky, heart-shaped earrings. He gripes that it isn’t easy to shop for the blonde girl because she doesn’t come out and say what she wants. Imagine that. We don’t even get to watch the play. Instead, BBK is recapping it to us, because this anime is that lazy. As a result, I’m not gonna bother recapping BBK’s recap. Moral of the story: rich people get what they want.

— YES LETS GET BACK TO THE FOOD

— NO THIS IS NOT FOOD

— I like how one of the lolis passionately speaks out against arranged marriages. By the way… SHE’S A SLAVE.

— BBK then disciplines his loli slave for daring to speak out against antiquated cultural practices. He even gets the title of mediator for using violence. Nice.

— Fang Ants? Wererats? All of a sudden, the city is besieged by pests and rodents. Man, I was so looking to watching the lolis eat meat.

— Fucking ants, though. The guy who wrote this story thought it’d be cool to have his hero fight off a swarm of giant, flying ants.

— We even get to see the loli slaves in action, too. Meanwhile, BBK is so OP, he just flicks pennies at them. Eventually, he gets bored, so he goes and saves the real estate agent from before.

— GET YOUR ADULT COOTIES AWAY FROM ME

— Plus, BBK would have competition in the form of an elf if he went for the real estate agent. That’s the problem with dating nowadays. They’re either too young or taken.

— Some soldier tries to steal BBK’s precious cores, but he forces the guy to buy them instead. As a result, the lolis get to feast tonight. I’m not sure why this scene is included, but there it is.

— Case in point, BBK randomly runs into a bunch of weird shadow enemies and a hooded figures in an alley. Naturally, one of them is a loli who needs BBK’s help. Not only that, she’s a loli elf. Of course it is. As soon as he saw the elvish manager, he knew he had to get an elvish loli of his own. Ooooh, I get it now! BBK’s purpose in this game is to collect them all! With 151 different types of lolis out there, he’s got his work cut out for him! Gotta fill out that Lolidex!

6 Replies to “Death March to the Parallel World Rhapsody Ep. 6: Fill out that Lolidex”