Oh my God… Killing Bites is what? It’s what?! The suspense is killing me!

— To briefly set the stage, Honey Badger and Taiga Aisaka are about to throw down. But sadly, we have to first listen to a bunch of boring old men have a little conference…

— So the baddies want to legalize turning everyone into furries. That’s real bad.

— And of course, the zaibatsu who wins this Destroyal will get to reap all of the profits. Why? I mean, why not? I, too, make all my business decisions based on some stupid deathmatch.

— This Orrin Hatch-looking loser obviously wouldn’t object, since Orrin Hatch himself is a massive bootlicker.

— But of course, the person who stands to benefit the most is Shidoh! Dun dun d–…

— Man, I don’t care. I really, really don’t care about these crusty old men. Bring it back to Hitomi, our honey badger. I need to know: do you need the sharpest fangs or not?!

— Just a reminder that this guy technically still exists even though he’s completely useless.

— It’s kinda funny how Taiga Aisaka can’t prance around in his own skin and fur. No, he has to wear a tiger-patterned pair of pants instead. And when I say funny, I really mean stupid.

— The smart thing to do is to have three people crush Honey Badger. But of course, this is anime, so Taiga Aisaka will not allow anyone to interfere with his hunt! He would hurt his own sister if she tried to help!

— We briefly interrupt the main attraction just to inform you that, yes, Bunny Girl is still an idiot, but Gorilla Boy looks so dumb, he gives her a run for her money.

— Running is itself a strength. You can easily tire your predator out. It’s totally valid for Bunny Girl to lead Gorilla Boy on a wild goose chase. Her problem is that she has no clue what she’s doing.

— Gorilla Boy: “When it comes to brute force, gorillas are the strongest in the natural world.” Riiiiiight…

— If you care, his backstory is that he used to get bullied a lot in school. It’s so perfunctory, it’s literally like a two-second throwaway scene.

— Unfortunately, Gorilla Boy tosses some tree trunks at Bunny Girl in order to trap her. If you remember anything from last week’s episode — and I don’t blame you if you don’t — Tree Hugger Kido hates that. He totally hates it! So does Gorilla Boy apologize? Does he promise to plant a thousand trees to make up for his crimes? Nah, he doubles down. He then triples down for good measure. Then he dies. I thought gorillas were smart. Oh Poor Man’s Donkey Kong… we hardly knew ye. And yes, Kido killed his own teammate.

— I still don’t know what animal Kido is supposed to be..

— No, this is not her shadow. Jesus Christ, anime… Luckily for her, Kido is ordered to move elsewhere. Plus, you know the anime wouldn’t hurt any of the main female characters.

— Oh my God, Solid Snake is still alive. He launches one last attack at Taiga just to die. Honey Badger stupidly tells the camera crew to rescue Solid Snake and take the rapist to a hospital. Why?

— And now, Taiga tells us all about his BFF Leo like we give a damn. I get it — he wants to jump Leo’s bones. What does that have to do with this Destroyal, though? Just fight. You’re here to fight, not tell stories.

— Sadly, this episode has been so full of pointless backstories and distractions that it’s already almost over. We only have a couple minutes of actual runtime left by the time Taiga finishes telling us all about how Leo took it easy on Honey Badger.

— The episode is almost over, and these two are still just glaring at each other.

— Finally, something happens: Taiga strikes Honey Badger so quickly, we can’t even see it without instant replay. ‘Cause, y’know, tigers are known for their frightening speed and agility.

— Chesty Cheetah claims the fight is over, but of course, Honey Badger somehow “dodged” the attack even though she went flying. I guess it’s one of those stupid anime things were she dodged just enough to avoid being knocked out.

— Then to set the stage for next week’s episode… 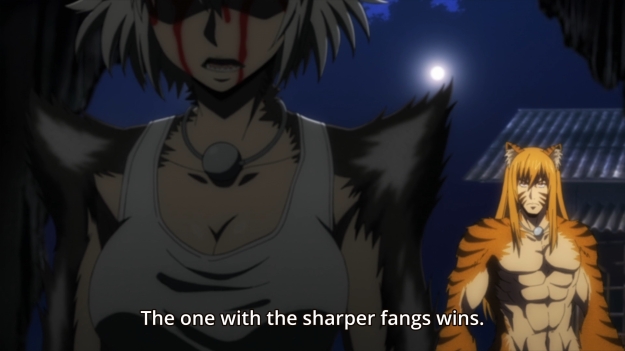 — The guys behind this show’s soundtrack must be having a blast. They probably don’t even know what the anime is even about. They’re just rocking out. I can respect that. I wish I could say the same about the show, but right now, it’s just a Friday night filler. I blog it precisely because it’s Friday night, and I don’t want to think.