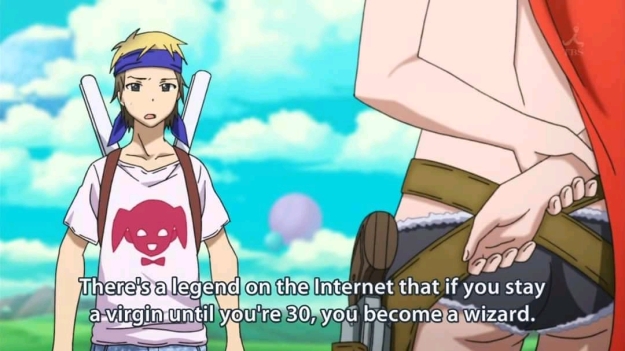 Before we get started, I’m calling it quits on Ramen Daisuki Koizumi-san. Why? Well, I only started blogging the show in the first place as an excuse to talk about my own ramen-eating escapades. Since I’m no longer doing that, why bother watching the show anymore? I’m keeping Takunomi since it’s at least short and to the point. 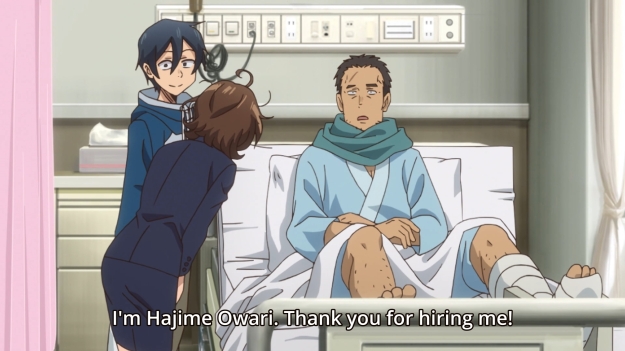 Remember the website that Hajime created for Shikada Dagashi? Well, the store just got its first online order. Both the girl and Coconuts decide that they should do the delivery together, which just seems horribly inefficient. I mean, who’s running the store while they’re gone? Anyways, the delivery ends up being for Coconuts’ dad, and he teases him for hiring Hajime. He swears he didn’t place the online order, though.

Afterwards, Hajime picks up a few beers on the way home. Once she’s all good and sloshed, she starts teasing Coconuts:

His reply is interesting:

He also can’t help but wonder if Hotaru had placed the online order.

Anyways, the remainder of the episode involves Coconuts attempting to finish a manga chapter in time for a contest that is just in two days. He realizes, however, that he can’t do it alone. As a result, his buddies (including Hajime) will help him out.

Also, Hotaru is finally making her return in next week’s episode. I feel bad for that top she’s wearing. It bears a burden none of us will ever know.

Power creep is fine, but you have to at least be consistent. When Goku got his Super Saiyan God form for the first time, there was a possibility that his duel with Beerus could inadvertently destroy the universe. Meanwhile, both he and Jiren throwing down, but the battle doesn’t feel any different. None of these battles have ever felt different. Without the inane commentary from Krillin and company, you’d never know that Goku had just gotten stronger and faster. This was Dragon Ball Z‘s biggest weakness in a nutshell, and it’s interesting to see that Dragon Ball Super doesn’t really know how to tackle it either. 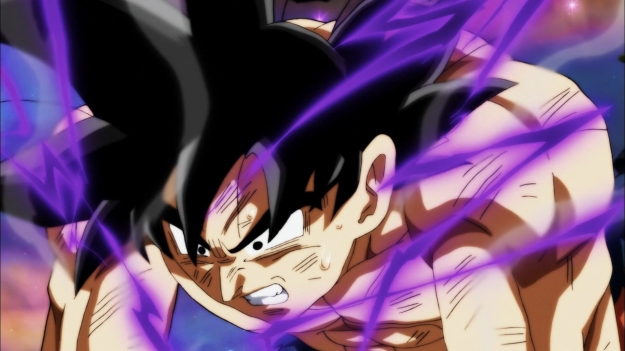 I am also incredibly annoyed by the fact that Goku’s body conveniently falls apart just as he’s about to win the tournament. What a stupid fucking way to extend the tournament for at least another episode. 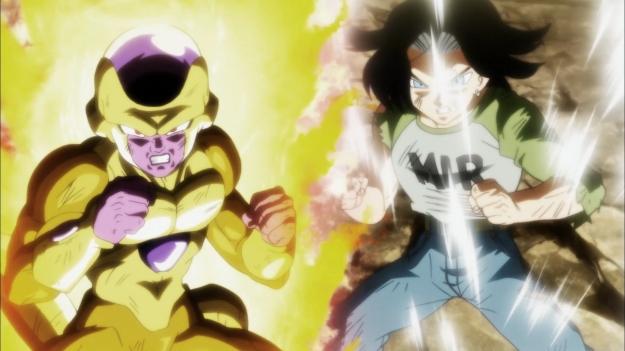 Last but not least, I’m not bothered that Frieza is still alive, but what the hell is Android 17 doing here? Way to render his noble sacrifice completely worthless.

Banba’s ex seems nonplussed to see him living with a trap. I sometimes wonder if this show is guilty if queerbaiting. Lin and Banba act like a romantic couple; all that’s missing is the sex. The other characters relentlessly joke about it, too. Anyways, the former eventually tries to leave, because he realizes he doesn’t trust his only friend. He’s been betrayed before, and it doesn’t help that he doesn’t understand what Banba is thinking. So to protect himself from being hurt again, Lin’s just going to bail. I dunno, Banba has never struck me as someone who is all that mysterious. He’s just your generic good guy who wants to do good deeds. Lin’s overthinking it.

Anyways, Banba wants to assassinate every single Kakyu Association executive, but Saruwatari (aka Submarine Ninja) has also been hired to do the same thing. The Kakyu Association counters by hiring Fei-lan (aka Lin’s old frenemy). Get ready for an explosive finale? Probably not.

The first short story takes up more than two-thirds of the episode’s runtime, but it’s incredibly silly. For some reason, weird stuff just happens wherever he goes. At one point, what looks like Godzilla emerges from a lake. But even though the small town has turned into “Bizarro World,” the only people who seem to notice are the six kids in the Occult Club. Personally, I didn’t find this story all that enjoyable. It’s kinda hammy, but not in a very interesting way.

In the second short story, a scarecrow molests a guy to death. Kinda. Not really. Meh, Ito Junji Collection as a whole has been pretty lackluster.

This one image pretty much tells you everything you need to know about the anime. I hope the last episode has him admitting to himself that he likes Takagi, but the odds are slim. 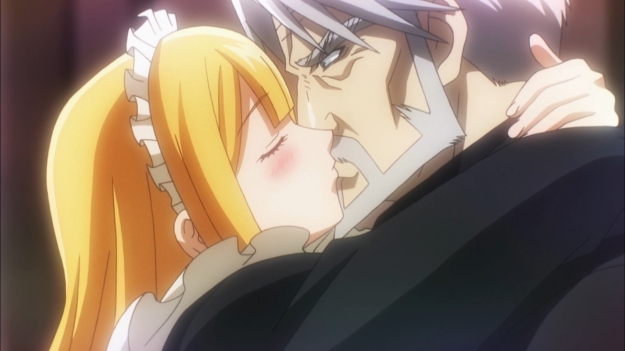 Gross. Anyways, Ainz tests Sebas loyalty, and in the end, he allows Tuare to work as one of Nazarick’s maids. Why? Tuare just happens to be Ninya’s older sister. Great. What’s not so great is how we spent more than half of the episode just to sort all of this nonsense out. Once again, an Overlord episode moves at a snail’s pace. Unfortunately, the poor girl gets kidnapped by the end of the episode. Ainz will, of course, stop at nothing to help Sebas save the girl. This confuses Albedo, but what’s the point? 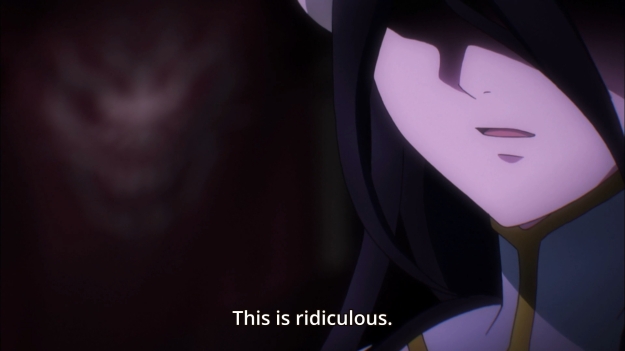 The show wants to act as though this will lead to potential drama down the line, but it won’t. 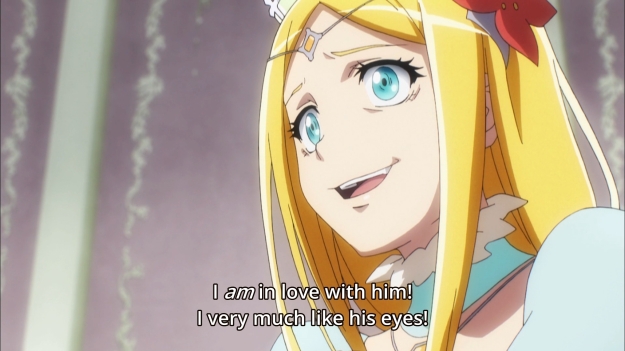 The remainder of the episode lets us see more of Renner’s true nature. Shrug.

Okinawan food is the theme of the day. That pork belly looks pretty good. As for this bitter melon dish? 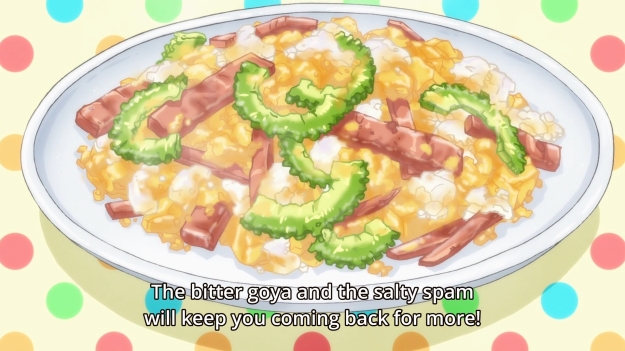 Eh, not so much. I can’t stand bitter melon, but your mileage may vary. My mom used to always make a bitter melon soup for dinner when I was growing up. No matter how many times I tried it, however, it was an acquired taste I could never pick up. 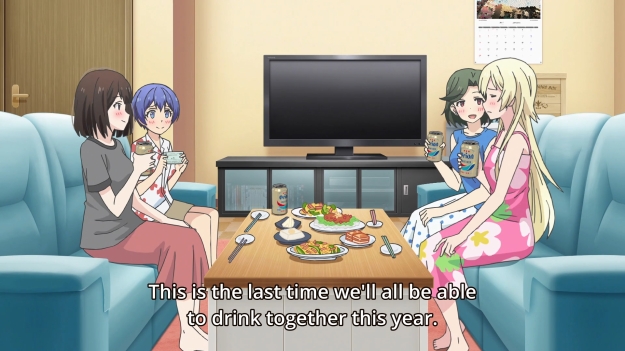 As for the alcohol this week, we have these Orion cans that look as though they have been amusingly photoshopped into the anime.

These suits have only enough juice for about half an hour of combat, so let’s stop in the middle of nowhere to talk about God knows what.

Alright, chill out for a moment there, female Jiren.

Toji no Miko is one of those shows were the bad girls are so obviously evil, it’s hard to imagine how they could ever function as a team. We’re nearly halfway through the story, and I still have no clue why anyone would throw their lives away for this Yukari-sama. I know I sound like a broken record about this issue, but it is by far the show’s biggest flaw!

Plus, the villains all have incredibly weak motivations. It’s all just a whole bunch of nonsense. For all their talk, however, nobody ever dies. Nobody ever, ever dies, so the show has next to no stakes. The story is too goddamn scared to kill off any of its precious girls.

…unless, of course, it’s Yume dying from the inside from some generic terminal illness. Y’know, the type that always likes to rear its ugly head in anime. 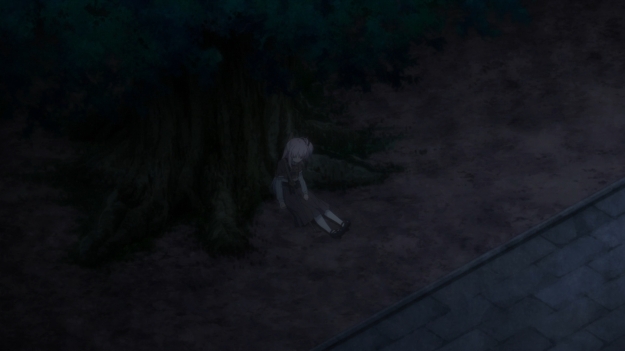 We’ll see if she actually stays dead, though. If anything, they’ll probably want to redeem her. Anyways, tune in next week for the halfway point of the series. Kanami and Hiyori finally get to face off against Yukari in probably yet another deathless battle.

Just to say something nice about this week’s episode, the choreography in the swordfighting was fine.