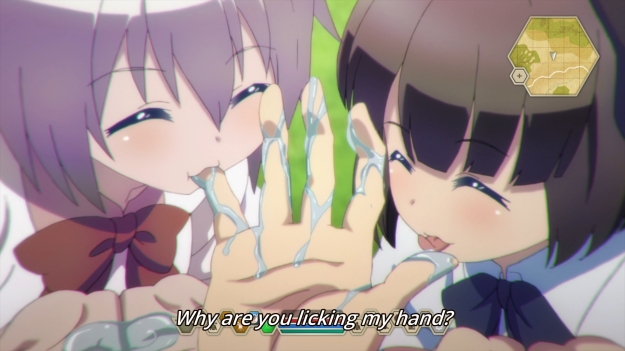 Get ready to say goodbye to Bargain Bin Kirito and his army of lolis. I knew I said I wouldn’t cry, but… sniff…

— BBK and his girls take over a local kiln, but these look nothing like the potion vials that they need. I also like how this scene starts off with the lolis moaning variations of “No!” and “Don’t do that!” These lines are accompanied by close-ups of their mouths and blushing cheeks. Ho ho ho, what could these girls possibly be doing! Whhhhhat? No, we’re totally not sexualizing these underaged characters at all.

— Aren’t they supposed to be glass vials? These are just plain clay.

— By the way, you don’t dry the clay to prevent it from bursting. You dry the clay so that it doesn’t warp or crack. Also, this reminds me of an art elective I once took in middle school. I was sculpting a polar bear, but I failed to get all of the air bubbles out. As a result, it exploded in the kiln. Yeah, I’ve always been a disaster when it comes to art.

— Naturally, BBK gets around this problem with magic. I’m amazed that he’s the first person to even try this. In fact, this could revolutionize the entire pottery industry for this magical universe. Vials are in short demand, but this changes everything!

— After a long and predictable montage, the team is on the verge of success. Unfortunately, evildoers are lurking in the treeline. Dammit, Charlie…

— The guy says all they gotta do is let the vials cool down… maybe magic might help.

— A group of assholes drop by to smash up the kiln. Apparently, you need a permit to even make potion vials. Like what? Of course, BBK knew this guy would drop by, so he had placed junk in the kiln beforehand. Great. But the nice potterer still lost his kiln.

— Where did he place the potion vials? Oh, just in his inventory. Even though Arisa is also not originally from this world, she does not get to play the game, so to speak. No, she’s literally just a loli slave. 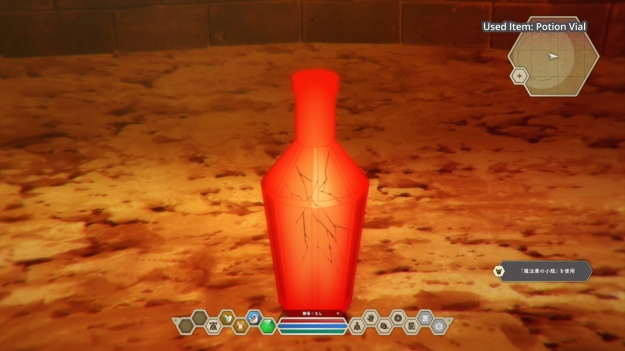 — Unfortunately, the vials crack and shatter as soon as BBK takes them out of his inventory. After all, he grabbed them when they were all at 1250 degrees. So we get to watch him game the system with magic and item boxes. It’s all terribly unexciting. I’m just amazed that someone actually thought that they could write an entire series of novels on a guy hanging out with lolis and fiddling with a game’s UI.

— BBK and his lolis go to deliver the potions. Naturally, the bad guys demand to know how he managed to get everything done in just a few hours. BBK’s reply is a groaner.

— The assistant viceroy flat-out refuses to sign the delivery note, so this guy has to show up to do the job instead. BBK simply told the witch to reach out to the count, who is now all aware of the evil deeds happening right under his nose. But then why didn’t we just do this right from the start? Blah blah blah, they had a contract, but so what? Contracts can be amended under extreme circumstances.

— The bad guy won’t go down without a fight, but the count simply brushes off the attack. After all, he can’t be harmed in his own territory. Wait, what? 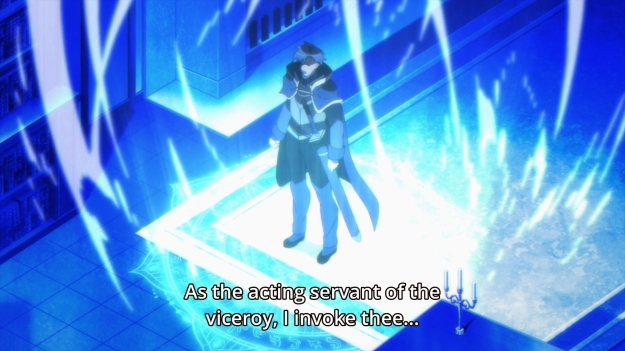 — He then adds, “I have pity for my old friend, therefore I will not charge you with treason, but will let you off with death.” So… it’s treason, then?

— But as soon as the count draws his sword, BBK rushes in and knocks the two baddies out. Remember, this is the last thing that a loli sees right before BBK goes in for the kill. It’s terribly frightening, no?

— Nevertheless, BBK interfered simply because he didn’t want his lolis to see people get killed in front of them. Hilarious. They’ve had to suffer through discrimination, endure enslavement, trekking through dangerous dungeons full of murderous monsters, listen to BBK’s annoying voice, and all sorts of other nonsense. But watching two bad guys get killed is a step too far.

— As a reward, the guy gets a lantern. What? No witch-type loli?

— He also gets a crappy title.

— But wait, we still have 8 minutes left in this terrible finale of an episode. What are we going to do with the remainder of our time? 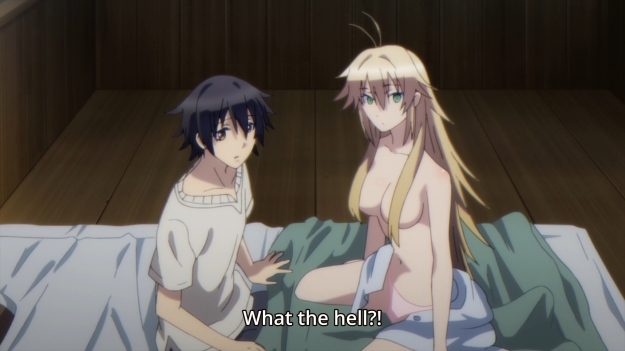 Oh, right… B-but it’s nothing perverted! He simply has to recalibrate her whatchamacallit. And in order to do so, she has to strip down to just her panties! That’s how it works! The elf-type loli quickly adds, however, that BBK could simply accomplish the same result by touching the doll’s back instead.

— Jesus, shoulder blades do not look like this, kids. Naturally, the doll has to moan when BBK touches her. Of course she does. This is how we’re going to cap off this terrible series.

— “We will travel anywhere at our client’s request… even this terrible isekai if need be.”

— What the fuck, now I’m watching the lolis lick fluids off of his fingers.

— Later that night, BBK reads to his lolis, but by this point, I’ve already checked out. I didn’t bother to pay any attention to the story. Let’s just wrap this up.

Look, what do you want me to say? This anime is just terrible. There’s no plot, the voice acting is bad, the animation is somehow even worse, and we have apologists coming out of the woodwork to claim that BBK isn’t a lolicon despite surrounding himself with nothing but lolis.

But even viewed as simply another dumb isekai, this show fails. It has no entertainment value whatsoever. The harem bits aren’t even worth mocking. The hero is overpowered, but he spends the vast majority of his time playing around with his UI instead of actually enjoying his time in a new world. The world-building is nonexistent. How something like this ever gets written, I don’t know. How something like this ever gets adapted, I don’t know either.