(Editor’s note: Whoops, I was wrong!) Speaking of Shidoh, he feels that Yuya’s continued existence would somehow become a problem in the future, so he has the guy assassinated. I’m not too worked up about the so-called protagonist, though. He was relatively useless from start to finish. Hell, he couldn’t even stop his so-called friends from attempting to gang rape some random school girl. Had they not unluckily picked up Hitomi of all people, Yuya would’ve just sat on the sidelines and done nothing. He’s that spineless. As a result, I’m amazed that Hitomi even cares about him at all. She tries to put on a brave face, but she clearly didn’t want to have to kill him. The story even wants to hint at the idea that Hitomi might have had feelings for Yuya, but that’s ridiculous. Not only that, it doesn’t really make sense why she had to do the dirty. Shidoh could’ve sent anyone to finish the job. Maybe he wanted to test her loyalty. Either way, this sudden heel turn isn’t what actually bothers me about this final episode. Rather, it’s a different incident altogether.

Those chameleon bastards that showed up at the end of last week’s episode? Well, Hitomi gets up from the ground and quickly eliminates two of them. The other two are taken out by none other than Shinozaki, the super hyped-up announcer. She’ll protect the integrity of the Destroyal at all costs. She’s just that passionate about this tournament. Back on the boat, Shidoh quickly moves against his opponents in some kangaroo court-esque scenario. Yoko’s grandfather is apparently guilty of causing the Japanese recession. Nope, I’m not fucking with you. And since he intends to use this whole human-animal hybrid technology purely for profit, Shidoh wants the old man gone. Leo quickly kills the guy who had sent into the chameleons. Yoko’s grandfather then tries to talk big, but Leo unceremoniously kills the old man too. According to Shidoh, this will now usher in a new evolution for mankind. The world will be completely changed as we all become furries! Sure, I guess. But here comes the part where all of the fun is immediately sucked out of Killing Bites. 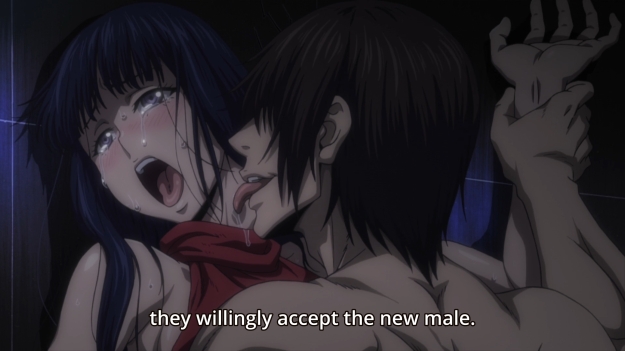 Yoko returns to find her dead grandfather’s body, and naturally, she’s pissed off. She tries to call for everyone’s heads, but Leo is no longer on her side. He won’t kill her, though. He’ll just rape her instead. Wait, what? Yes, the guy is going to fuck her right here and right now. The stupid nature commentator suddenly chimes in to inform the audience that this is just what happens in the animal kingdom. First, we’re not in the goddamn animal kingdom. These are just people endowed with animal-like abilities, so they’re still subject to human morality. Nevertheless, let’s continue. The narrator then tells us that when the usurper kills the leader of the pride, the female lions will simply accept the new male. Yep, Yoko is totally accepting Leo with all those tears streaming down her face. If you want to add rape to your story, then just do it. God knows plenty of stories feature rape. At least have the decency not to skirt around the issue. Don’t fucking wuss out and offer up weak-ass justifications. “B-b-but that’s how lions work!” Fuck you, Killing Bites.

Anyways, there’s now a special island just for human-animal hybrids. Bunny Girl is famous due to her winning the last Destroyal, but the anime soon teases us with new faces. They’re all here for the next tournament, which leaves things open for a potential sequel. But why would I want a sequel? I only tuned into Killing Bites in the first place for some mindless fighting action. I just wanted a tournament full of dumb animal gimmicks and awesome nature facts to follow. Unfortunately, the actual tournament ended a week ago, so for the finale, we got an episode full of, well, dark machinations that leave me feeling as though I need a long, cleansing shower. I can shrug off Yuya’s death because he’s really not as innocent as he is portrayed, but I don’t want to watch anyone get raped. Seriously, what the fuck, man? And now, the show wants to dangle a potential season two in front of us like I’m going to tune in. And for what? To watch Shidoh manipulate Hitomi to his own ends even more? To watch the now enslaved Yoko attend to Leo’s every need? To meet more iterations of stupid assholes like the rapey Snake guy? Yeah, I’ll pass. I was going the show a higher grade, but after this episode?