Oh right, the last episode airs today… but it never really ends, does it? Sigh, you’ll see what I mean. For now, let’s start from the top.

— Last week’s Mission Impossible isn’t quite over yet. The enemy leader manages to pull himself back up, so he continues taking shots at both Violet and Dietfried. Our girl steadfastly defends Gilbert’s brother with her arms and ends up losing one of them in the process. Eventually, the bad guy tries to jump off the train, but Violet prevents him from doing so. Sorry, but I don’t really understand what happens here. How do we go from this… to this?

— Ah, whatever. Violet’s precious brooch goes flying from the bad guy’s grip, so she tries to reach out for it. It somehow finds its way into Dietfried’s hands, but he gives it back to the girl. This means he no longer hates her. Cool, I guess.

— But they’re not out of the woods just yet! The bad guy reveals that he and his boys still have one last trick up their sleeve: bombs have been planted on an upcoming bridge! Okay, what are you doing? No, seriously, what are you doing? The bad guy calls Violet and Dietfried naive, but here he is, telling them all about the bombs. If he had just shut his damn mouth, our heroes wouldn’t have even known that the bridge had been rigged to blow up. Not only that, why did the anti-peace faction even bother infiltrating the train in the first place if they already had bombs in place to derail the train?! 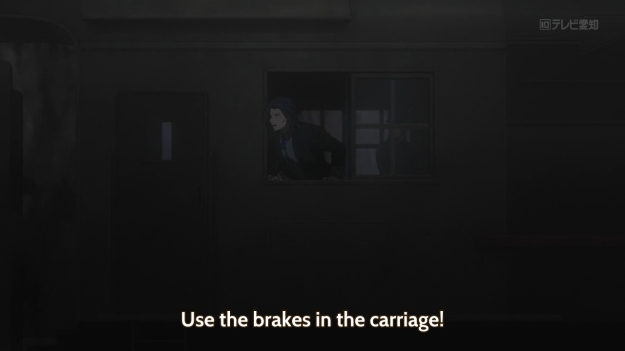 — Naturally, the train won’t stop in time. Of course it fucking won’t. That means Violet will have to leap off a moving train, race to one of the bombs, and try and pry it off before it blows up.

— But what about the other bomb?! Benedict finally gets to be useful. He also jumps off a moving train, jump-kicks the other bomb off the bridge, then manages to cling to the bridge at the very end. Amazing! And by amazing, I mean nice shoes, bro.

— Meanwhile, poor Violet-chan is trying to yank the other bomb off with her one remaining arm. First, her some of her fingers get torn off, but the girl gets right back to it! Eventually, her last arm goes flying off as well, but she manages to pry the bomb loose! She gets it done in just the nick of time! The bomb goes boom in midair because… well, because we just couldn’t end this scene without an explosion, I guess. Benedict also saves her in the nick of time.

— Oh yeah, the bad guy decided to commit suicide at some point. Shrug. Who even cares about him anymore?

— The next day, we see Cattleya and the special envoy at the peace talks. The war is officially over as all sides agree to the treaty. Not only that, Leidensuperlongname will even commit to aiding in the north’s recovery. All this thanks to Violet! If the special envoy hadn’t made it to this summit, these wonderful things would’ve been tabled completely! Can you believe that!

— Also, how ridiculous is it that Cattleya is still dressed like that during some super important meeting between several heads of state? Like c’mon, she doesn’t have any sort of formal wear?

— Outside, people are throwing a celebration with confetti and everything because we finally, finally have peace. I guess the anti-peace faction is no more.

— But I mean, why couldn’t they have just flown the special envoy via air? Wouldn’t that have been faster? Didn’t a postman literally just fly through a warzone without issues? Didn’t a postman literally just deliver Violet to her destination also without any issues? Even if this special envoy had died, couldn’t some pilot have “airmailed” another representative overnight?

— Plus, if you’re going to set it up so that Violet is the superhero who saves the day, then why not go all the way and shower the girl with commendations? She literally gets nothing for all her efforts. You’d think the girl would get medals or some shit, but nah. She just gets another set of arms.

— Anyways, some air show is fast approaching, Cattleya encourages Violet to participate. You can do so by submitting a letter, but the girl confesses that she has yet to write a letter for herself. Clearly, her letter would be addressed to Gilbert, but the girl suddenly finds it difficult to find the right words. She can transfer other people’s feelings to paper, but not her own. She still has a mental hurdle left to overcome.

— She thinks back to that night before the final battle. She wanted to know why Gilbert didn’t want to issue orders to her anymore. We finally get to see the rest of the conversation. It turned out Gilbert got really incensed by the girl’s refusal to live on her own without orders. He raised his voice and wondered if she really thought that he saw her as nothing more than a tool. He then told her to stop lying about her emotions, because he could clearly see that she had them. Eh, I can’t really blame either of them here. On the one hand, you have a little girl who had been forced to serve as a child soldier. Taking orders was all she ever knew, and at the time, she mentally could not process her own feelings. On the other hand, Gilbert was frustrated and the stress of war didn’t help. He only wanted the best for the girl.

— The next day, Violet tells both Cattleya and Claudia that she couldn’t write her letter. All of a sudden, she gets a visitor: a Bougainvillea has come looking for her. The girl rushes downstairs and clutches her brooch, because she still clings onto the hope that Gilbert is alive. Of course, it’s just Dietfried.

— Dietfried ends up taking the girl to see this frail, old woman. It’s none other than Dietfried and Gilbert’s mother. The woman wanted to see the child that Gilbert had wanted his family to adopt. She then tells Violet that she doesn’t blame our heroine for her son’s fate. At the same time, however, she won’t give up hope that her son is still alive out there somewhere. What’s up with that? Over and over again, this episode seems to hint at the idea that Gilbert might still be alive. Please don’t go there. Anyways, Violet can’t help but cry as she understands that she still loves Gilbert too. Likewise, the man will live on in her heart even if she never meets him again.

— Outside the Bougainvillea mansion, Violet prepares to leave when Dietfried tries to do her a favor. He orders her to live for his brother and eventually die from old age. So again, if you haven’t already realized it, Dietfried no longer hates the girl. As a character, however, Dietfried never endeared himself to the audience, so I find it really hard to care either way about his latest breakthrough. Anyways, the girl impresses him when she tells him that she no longer needs orders. That night, she manages to write and finish her letter to her major.

— We next see Violet hanging out with Erica and Iris at the air show. Luculia even shows up for good measure. She informs everyone that she finally managed to write a letter to her late parents. Meanwhile, Iris reveals that she wrote to her future self. She still intends on becoming the most popular doll in Leiden, but with Violet next to her, good luck with that. As for Erica, the girl who had all but disappeared completely from the story since the second episode, she tells us out of nowhere that she’s in love…

— Cattleya had already told us that she was going to write a letter to soldiers she had met during her time as a showgirl. She then pulls out a piece of a paper, which supposedly contains one of Claudia’s many drafts. The guy had written some sappy thing to his future daughter. It’s a bit cruel to read his private thoughts out loud to everyone, isn’t it?

— A plane then flies overhead and dumps a ton of letters into the air. The idea here is that you’re sending your feelings to the person you hold dear in your heart no matter where they are, but the metaphor feels overwrought. I mean, we even see those letters sparkle as they float through the sky. We get it, KyoAni. We get the SymbolismTM. 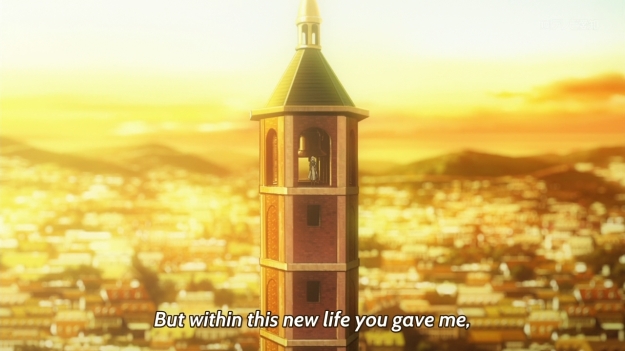 — We then see Violet depart on a trip. As she reads her letter to her major out loud to the audience, we see her visit many of the locations from throughout the series. We also get more close-ups of the girl’s face as she cries for like the umpteenth time in this episode. Yes, it’s very sad. Very, very sad. But her words feel kinda redundant. She understands his feelings now, she understands her feelings now, she appreciates life now, she’ll always believe that he’s still alive, and last but not least, she loves him. If all those letters floating in the air felt overwrought, this epilogue completely blows them out the window. Throughout this horribly tortured sequence, we see a solitary letter fly through the air. It’s Violet’s feelings, y’all! Violet’s feelings are trying to make their way to Gilbert! When she finally finishes reading her letter to us, we eventually see the letter nestled softly in a field of flowers. Her feelings have finally made it! Then we watch as a drop of water fall through the air in slow motion. Around it, the heavens are literally turning! We go back to the drop of water, and in it, there’s a glimmer of fire, representing a spark of life! The drop of water finally lands on a violet, and as the flower undulates with life and vibrancy from the touch of the water, the night sky suddenly brightens up to show that a new day has come! Violet has learned to live!!@!!

Dude… who the hell directed this? it’s like some fucking high school art project with all the SymbolismTM it throws at you.

— Finally, we see that Violet has returned home. She’s in the middle of writing a letter when Claudia tells her that she must depart urgently to meet a client. When the girl arrives at her destination, her eyes light up… but we don’t get to see who she sees. The episode — and the rest of the series — comes to and end as KyoAni informs us that a new project has been greenlit: 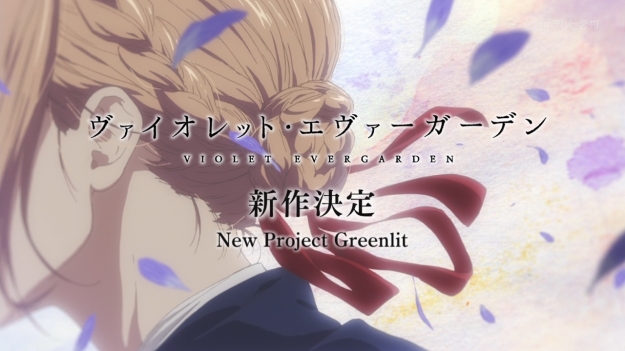 I’m going to laugh so hard if it turns out Gilbert is still alive.

I’m just… I’m out of words to say about this anime. I won’t ignore all of the good things it’s done, but I can’t deny all of its pitfalls either. Some of you will think that I’m being too harsh, and others will say that I’m being too lenient. Either way, I’m tired.