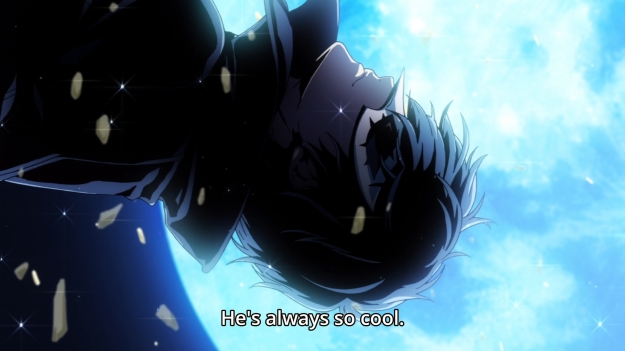 For people who haven’t played the game, I’ll try not to spoil too much of the plot.

— So for starters, Persona 5 was my second favorite game of 2017 (Nier: Automata just barely eked it out). It was pretty much a guaranteed that I would cover this series. I didn’t do the same for Persona 4 The Animation, but I think I took a hiatus from blogging around that time.

— There’s a distinct lack of Lyn Inaizumi so far in this adaptation. I know she does both the OP and the ED, but the casino opening just doesn’t feel right without the “Life Will Change” track.

— I think Ren is far more interesting than Yu Narukami. For one, Ren kinda has an intriguing duality to his character that the other MCs lacked. He’s all about flair and bravado as a Phantom Thief, but he plays up the innocent schoolboy shtick in the real world. In certain scenes, I can’t help but wonder if he’s putting on an act. I’ll try to point them out as I come across them.

— It looks like anime MC got beaten up a whole lot more than his video game counterpart, but I might be misremembering things. It’s probably about the same now that I think about it. 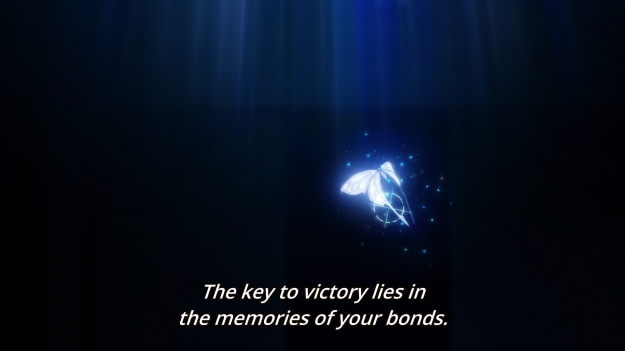 — If you’re watching this as someone who has never touched the Persona series, I have to wonder if the opening isn’t slightly confusing. I mean, a butterfly just shows up out of nowhere and starts spouting gibberish at the main character. I think I’d be confused too if I wasn’t already used to both Persona’s brand of storytelling and its aesthetics.

— Sae begins to interrogate Ren, so now we flash all the way back to the beginning of the year. What we’re watching now is the story that Ren wants to tell… people are often biased storytellers, though. There’s no reason to think that Ren is an unreliable narrator, but at the same time, there’s no reason to think he wouldn’t embellish a few details either, right? And since the game is all about putting the player in control of a kid’s life for an entire Japanese school year, then wouldn’t it make sense that we’d exaggerate a few things too in order to make ourselves look cool? Eh, just some food for thought. Essentially, both P3 and P4’s stories started out in much the same way, so it’s nice to see P5 change things up slightly with a framing device.

— Huh, Akechi shows up rather early. Plus, there’s even a mention of P4’s Naoto. There’ll be plenty of time to talk about Akechi.

— This adaptation likes its nods to previous games.

— This scene is another example of what I’m talking about. Ren notices a strange new app on his phone, then all of a sudden, the world freezes around him and turns a bloody crimson red. A huge flame appears out of nowhere… then everything returns to normal. The main character isn’t even phased. Odd, isn’t it? And if you were new to the story, you might even say that the narrative so far is a bit confusing. 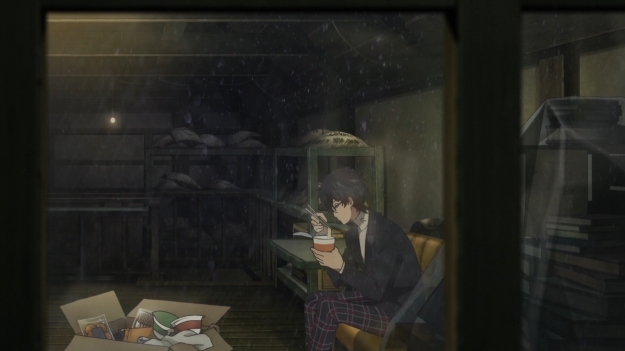 — What’s cool about adaptations is being able to see old locations from different angles.

— Also, that dog is not mean to you in the game at all. Game dog is a good boy. Anime dog, on the other hand… well, not so much.

— No, I didn’t miss Takemi. I saw her too, but since she’s not important yet to the story, no need to mention her now.

— Anime Sojiro seems a whole lot nicer and softer than game Sojiro. They share the same words, but it’s all about the tone and delivery. I thought game Sojiro was kind of an ass, honestly. Early on, anyways.

— Then we get anime Igor… not much to say right now other than that I miss his old voice.

— I wasn’t a big fan of Caroline and Justine. Even after finishing their storyline, I didn’t care much for the results either. Still better than Margaret from P4, I suppose. God, Margaret’s English voice-acting was terrible.

— Oh wow, they hinted at this super early. Speaking of Kawakami Sadayo, who ends up becoming Ren’s homeroom teacher, she’s probably the worst conceptual character in the story. There’s a lot that I like about her, but there’s also a lot that just don’t jive when you consider the first arc’s conflict. But again, we can debate that later when we finally get to know anime Kawakami.

— We finally get to see an example of those strange traffic accidents that have been occurring all throughout the city. Train operators are randomly going nuts. I actually think the anime cutscene within the game does a better job than what we see here.

— Ren’s mask falters a bit when he asks Sojiro why the latter even agreed to take him in. Sojiro begins to give a terrible life lesson, and this reveals a bit about why I vastly prefer Ren to both Yuki and Yu: “If you can’t beat ’em, join ’em. And no matter what happens, pretend like you didn’t see it.” We then see Ren ball up one of his fists in anger. He’s trapped in a culture that prides order and maintaining the status quo over freedom and individuality. At the same time, however, he has to pretend to be good kid. Not that he isn’t one, but y’know what I mean — wearing glasses that he doesn’t need to wear, always keeping his jacket buttoned up, being soft-spoken around everyone, so on and so forth. Remember, he’s a Phantom Thief. He’s a trickster. His real life personality is a fake; it’s his Bruce Wayne to the alter ego’s Batman.

— Ah, Kamoshida… I think he’s a good villain for the story to start with. He’s very easy to hate.

— And finally, the anime introduces us to Ann. I like Ann. From what I can tell, she’s not particularly popular in terms of P5 waifus, but I don’t mind her at all. She’s a bit of an airhead, but I find her a whole lot more relatable than some of the later characters we’ll encounter. I know I’m sounding like a broken record, but I’ll expand on this later.

— I’m glad they kept Ann’s discomfort in Kamoshida’s car. Actually, she looks even more put off here than she did in the game’s cutscene.

— Ryuji is infuriating, because he’s a huge goddamn idiot. His heart is in the right place, but for reasons that you’ll see later, he’s such a dumbass. I never really felt bad that everyone kept making fun of him. He often brought it on himself. But honestly, he’s less annoying than P3’s Junpei by far. Between Ryuji and Yosuke, however… I think it’s a push. 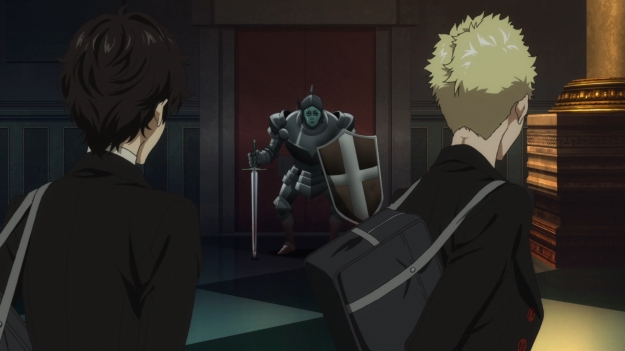 — Eventually, the mysterious app sends both Ren and Ryuji to the other world. Shadow Kamoshida looks smaller than I thought he’d look. He’s not as big as I would expect from a former Olympic medalist. They kept his pink speedo, but he might be missing a few leg hairs. These details don’t really matter. I’m just pointing them out ’cause they came to mind. Also, if you don’t know why there’s a Shadow Kamoshida, it’ll eventually be explained to you in a future episode (likely next week’s).

— I always liked how the majority of the people who played the game would cringe at Ren tearing off his mask. It’s also a great example about how metaphors don’t necessarily have to be subtle. There’s nothing particularly subtle going on here. Yes, tearing off the mask that you wear is necessarily painful. The imagery is powerful enough that subtlety isn’t needed. I think the game version looks much more painful than what we get here, though.

— Hm, Ren looks too pretty here, I think. His eyes need more craziness in them.

— But overall, the adaptation seems pretty solid. The animation is great, and I hope to see A-1 Pictures keep it up. There are a few minor changes that aren’t as effective, but nothing too major — nothing that actually detracts from the story. I hope the adaptation continues to lean on fleshing out Ren’s personality, since the previous Persona adaptations really dropped the ball on that front. I hated anime Makoto, and anime Yu seemed more like comic relief than anything.

10 thoughts on “Persona 5 The Animation Ep. 1: So when can I start fusing Arsene?”