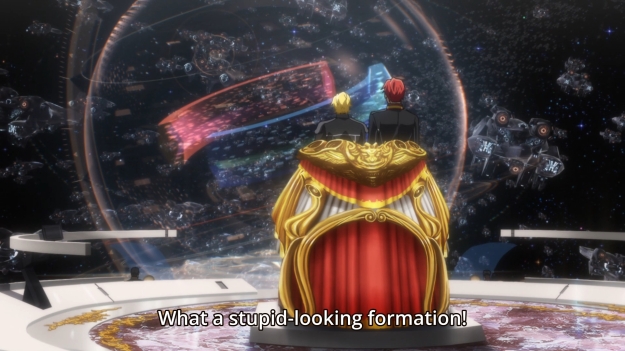 Last season, I looked forward to Tuesdays. After all, I had the pleasure of watching and covering A Place Further Than The Universe. This season? Eh, not so much. 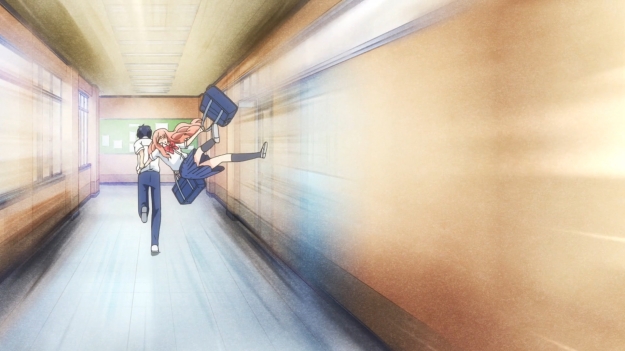 I initially planned on doing an in-depth coverage of this show, but the more I watched, the more hopeless that prospect became. Hikari is just a horrible, horrible person. Iroha wants to know if he has any plans for an upcoming Sunday, and as it turns out, he does! He’s going to wait in line all day to buy a new game. What a winner. Well, Sunday rolls around, and he happens to see his girlfriend out in public with another guy. So what does Hikari do? He instantly jumps to the conclusion that Iroha is two-timing him. How nice.

Sure, I get it — the protagonist is both young and socially awkward. Worst of all, he’s insecure. He doesn’t know how to communicate, and he can’t understand why a girl like Iroha would wanna date an otaku like him. But it doesn’t help his case when he spouts shit like, “By the way, if this is really your first time, you have to value yourself more.” What’s going on, you ask? Because he doesn’t think that their relationship is serious, Iroha offers to sleep with him. Naturally, she’s a virgin. In other words, Hikari thinks she should be more protective of her chastity simply because she’s a virgin. Hear that, girls? Sex devalues you!

The guy eventually storms off, because he’s not ready to have sex. In fact, he claims that he wants to do some research on it. Nevertheless, he can’t help but bitch as he leaves his girlfriend behind: “I just… wanted to talk properly.” Are you kidding me, my guy? She’s right there. If you wanna talk to her, she’s right there. I understand that he has a hard time with communication, but you can’t complain about it when the golden opportunity is served up to you in a platter! He follows this up by doing the same stupid shit that all loser heroes do in these romance anime: he tells his supposed rival — y’know, the guy Iroha was with on Sunday — to take good care of his girlfriend, ’cause she’d be better off without him.

Up until that point, I had been taking my usual notes on the show — the notes I take whenever I watch any show. I didn’t quite ragequit the anime, but I definitely trashed my notes completely. Fuck it. 3D Kanojo Real Girl doesn’t deserve its own post every week. I mean, just look at this show’s shoddy animation. It’s like something from ten years ago. I know Hoods Entertainment aren’t amateurs. I know they can draw high school girls breastfeeding an edgy asshole, so don’t you go and tell me now that a loser romance series eight years later is suddenly too difficult to animate! Anyways, I’m just going to create a whole new feature to cover all these uninspired Tuesday anime.

Legend of the Galactic Heroes – Die Neue These Ep. 2: Another genius pretty boy

What sucks is that this show isn’t even bad. It’s just… unnecessary. I thought that after the first episode we’d maybe get to see a new twist on the original story, but no, this is really just a remake. Why, though? And coincidentally enough, half of this week’s episode ends up covering a good chunk of last week’s episode. The good news is that we’re seeing things from the other side, i.e. from Yang Wen-li’s perspective. The bad news? His perspective is a whole lot like Reinhard’s! He, too, is a brilliant tactician. But he, too, is held back by short-sighted idiots. Yang pretty much predicted most of Reinhard’s moves. After all, it’s just pure logic hurr hurr hurr. Unfortunately, he can’t convince Commander Paetta that he knows what’s best for the Alliance. As a result, both the 4th and 6th fleets have been defeated, and the 2nd is about to go down with them. But as soon as Yang takes over, he instantly lures Reinhard into a battle of attrition, which, by the way, is fittingly shaped like a donut. In the end, our blond count has no choice but to grudgingly pull out. After all, he’s already fucked both the 4th and 6th fleet; he’s already won the battle. This works out for both sides, because Yang also gets to enjoy his moral victory.

Like I said, the show’s fine… it’s just hard to get excited about a retread.

Tokyo Ghoul:re Ep. 2: That awkward moment when you bump into your ex

Last week’s episode ended with Haise unleashing his ghoul side, so I thought we’d just pick up where we had left off. But no, he quickly loses to Orochi. So what does he do? He breaks his finger and unleashes his ghoul side again. I thought we just did this. This time, however, it works…? Not only that, Orochi’s mask falls off and reveals Nishio’s face underneath. He even refers to Haise  as Kaneki… gee, I dunno guys… do you really think Haise and Ken are the same person?! Anyways, Haise goes nuts, Nishio escapes, then a bunch of boring nonsense follows. Let’s just skip ahead to Haise’s one-on-one with Arima Kisho.

For some reason, they’re just fighting in the middle of a large conference room. There’s no leadup to this at all. They’re just fuck-fighting. But it’s also a therapy session as Haise talks about his recent harrowing experience: 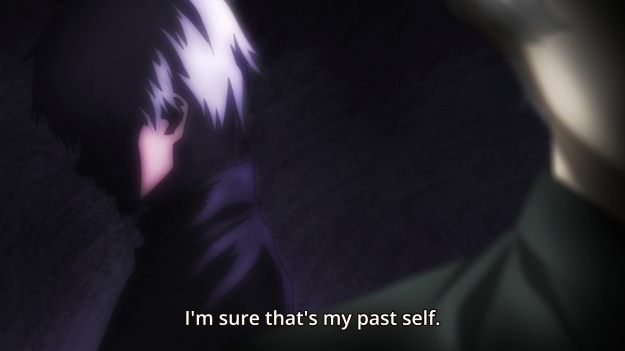 Man, I dunno, do you really think Haise and Kaneki are the same person? Haise then confesses that although he has no recollection of the first twenty years of his life, he’s still currently happy. Eh, I guess I can believe that. But then the guy continues: “If my past self returns, I feel like everything I’ve experienced the last two years will disappear.” Sure, sure, but how about the fact that your first twenty years have already disappeared? Arima naturally asks, “Don’t you want to see your previous family or friends?” Haise responds with, “I already have a family.” So your old family should suffer! What a dumb reason to want to stay an amnesiac. It’s interesting, though. If Haise had delivered these lines with more nuance, the subtext of the scene would change completely. For instance, if he had seemed remotely unsure of himself at all, we’d then naturally wonder if perhaps he’s just deluding himself. Ken was never really all that confident in himself either. But nevermind that. My point is, I can’t tell if the show wants us to mock Haise’s naivete or not.

The anime starts flashing each member of Haise’s team for us to see as if this means anything to us. After all, this is only my second episode with Quinx. No emotional connection has been established between the audience and this team, and as a result, the conversation between Haise and Arima feels hollow. All we can do is shake our heads at the hero. But is this perhaps what the show wants us to do? Maybe. Because near the end of the episode, Haise is out with his team when he suddenly smells delicious coffee. This lures him into Touka’s new coffee shop. Yes, the Touka. She is pretty much the majority of his old family that he supposedly no longer wants to return to because he has his new family. And of course, drinking her coffee suddenly renders him emotional and nostalgic. He can’t quite remember who she is, but she nevertheless captivates him with her beauty… almost the same way Rize did. So this makes him look even worse in that meeting with Arima.

More stuff happens in this week’s episode, but I don’t care to detail them. Let’s admit it… we’re only here for Ken/Haise. Who gives a fuck about Urie?

Anyways, I guess this is what I’ll do to fill the gap left behind by A Place Further Than the Universe. I’ll just cover three bad to middling shows instead.

8 thoughts on “Tuesday’s Terribles Wk. 2: A futile attempt to fill some big shoes”