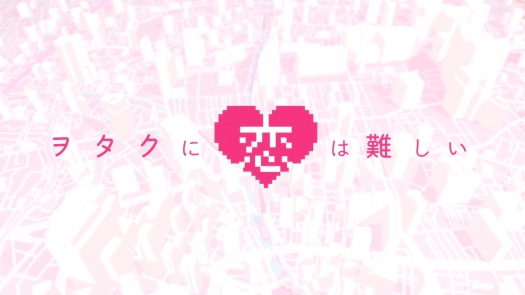 One good light-hearted romance… just one. That’s all I’m asking for. 3D Kanojo Real Girl already bombed hard, and Tada-kun wa Koi wo Shinai isn’t looking hot. This is my most desperate hour. Help me, Wotakoi. You’re my only hope! I already have one good romance, actually: Darling in the FranXX. Sure, sure… laugh all you want. I don’t care; I’m still going to enjoy the show. The only problem is that it’s not really a feelgood anime… not right now, anyways. As a result, I need at least one of these light-hearted romances to step up and deliver the goods. Something that makes me feel all warm and fuzzy on the inside, but at the same time, it won’t compel me to write 2,000+ words every week either. Will it be Wotakoi? We’ll see, I guess.

The first episode is alright. Nothing too compelling, and at the moment, the main character Narumi is a bit annoying. Y’see, she’s a bit of a hypocrite. She’s a full-blown fujoshi, but she swears she’d never date a big ol’ nerd like herself. Nevertheless, she’s hellbent on finding out if her cool senpai is also a giant nerd as well (spoiler: she is). Narumi quickly finds out, however, that she has a lot of growing up to do. What I mean by this is that she’s an adult now, and adults shouldn’t care about nonsense like whether or not you’re an otaku. She acts like it’d be the death of her if her “dirty secret” ever gets out, but the truth is, she just had bad luck. Y’see, she got dumped by her last boyfriend because he didn’t want to date a yaoi fangirl. Unfortunately, Narumi learned the wrong lesson from her failed relationship. It’s not that being an otaku is bad. Rather, it’s that she dated an asshole.

Of course, we already know how this show is going to go. The synopsis spells it right out for us: Narumi is going to end up with her childhood friend Hirotaka, and he’s a huge otaku himself. As a result, she’s going to have to get over her silly insecurities real quick. For now, however, the main love interest is a bit of a jerk. He’s always his glued to his Switch, and he barely emotes whenever he speaks. Hirotaka is as warm as a block of ice. Still, Narumi feels as though he’s one of her few otaku friends, so she likes to complain to him. So in the end, he woos her with a nerd’s love letter: “If it was me, I’d collect materials and level up with you whenever you want. If you had to work overtime, I’d wait for you.” Shit dude… how can a girl say no to that?

So Hirotaka goes on a spiel and asks her out. He’s been thinking about it for a while now, and he finally decides to go out on a limb and ask her out. That’s commendable, I guess. The problem, however, is that I’m sorely disappointed by her reaction. She comically accepts him as her boyfriend, then she narrates, “Thus, the two otaku started dating.” Dude, c’mon. That’s such a weak way to end the episode. They just shook hands on it? Is this dating or a business transaction? Did they at least embrace each other? Hold hands? Kiss? They’re both in their mid-twenties, after all. But at the end of the day, you can see that this post is quite long. It certainly looks as though this might be a show where I’ll have a lot to say, so I’ll blog it every Thursday night (assuming the episodes come out on time). I mean, it can’t do any worse than 3D Kanojo Real Girl.

— So far, I’m not impressed with the animation.

— Our heroine is off to a great start. She wakes up and finds out that her alarm never went off. Worst of all, she’s now late for work. just need to find a job where people don’t care if you’re late. I can roll in at 10am if I wanted to.

— Man, I’m surprised how bad this looks. This is by A-1 Pictures? Seriously? I mean, they’re not KyoAni or anything, but they’re better than this.

— Plus, I just spent a minute watching a girl run through generic locations.

— This guy is going to be Narumi’s future boyfriend? Ew, don’t date smokers. Seriously, the otaku thing isn’t a problem at all, but I could never date a smoker. It’s always funny how girls will ask me if I have a problem with short hair, piercings, or tattoos. My answer is always no; none of those things bother me. In fact, I prefer short hair on girls. But if you smoke? Nope.

— The OP is cute, but the song does nothing for me.

— Still, it’s nice to get a love story between adults and not high school students.

— Narumi is super impressed by her coworker: “Ms. Koyanagi looks like she’s good at her job.” Really? You can tell just from that? 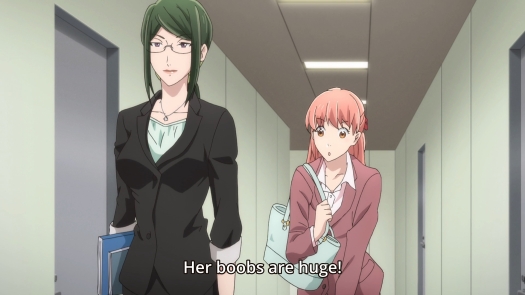 — The girl starts marveling over Hanako’s breasts, but they don’t look so impressive from this angle. The animation quality screws us again!

— Hanako kinda gets a sly look on her face when she starts asking Narumi about her previous job. Hm.

— So our heroine bumps into her future love interest, and she recognizes him even though they haven’t seen each other since middle school. Considering their cushy office jobs, I have to assume that they both went college. As a result, you gotta think it’s been almost a decade, and yet she still recognizes him, huh? Interesting. I don’t know if I’d even recognize my best friend from high school, much less middle school. Anyways, Hirotaka looks too cool to care. We know he’s supposed to be an otaku, though… so maybe it’s just an act.

— Right off the bat, she invites him to dinner. He agrees… but then he goes and outs her in front of their coworkers! Oh no! Not… being… a fan of anime… ’cause that’s embarrassing? Like I alluded to in the spring anime preview post, in this day and age, does anyone really give a shit anymore if you’re an otaku? It’s 2018, man. One of my coworkers literally cosplayed as 2B recently. This shit is normalized now.

— This is new, though. I’ve never seen an adult play games openly at a sit-down restaurant. C’mon, the food is getting cold. 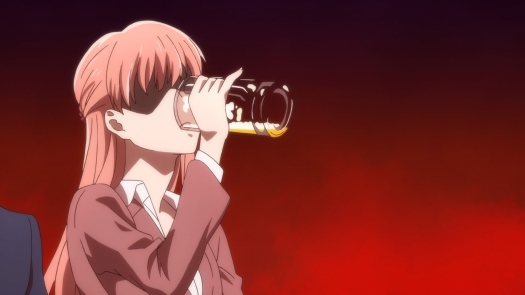 — Apparently, Narumi was dumped her last boyfriend because she’s an otaku. In fact, she quit her last job because they worked together. Eh, so she found one bad egg out of a dozen. Whatever. You definitely don’t want to shit where you eat, though. This is why you don’t date coworkers. Still, I’ll throw her a bone and commend her for her impressive chugging skills.

— Narumi swears she’s going to hide her otaku-ness from her next boyfriend. It’s genius! Not what she just said, but the fact that if you date an otaku, you won’t have to hide anything!

— Narumi: “Making you my boyfriend would be such a waste. You’re one of my good otaku friends.” First, that doesn’t even make sense. Second, they just met up again. They’re friends already?

— I love how it’s 2018, and they still list the character’s blood type. Oh Asia… I say Asia, ’cause I know South Korea still cares about that nonsense, too. Then again, one of my coworkers likes to read her horoscope every morning.

— Playing your Switch at work is brave, but I guess that’s how hardcore he is. I’d do it if I had any games worth playing on that damn console. Maybe when Octopath Traveler comes out.

— Only in anime do I ever see girls obsess over how cool another girl is.

— It turns out Hanako is a big nerdo herself. I still keep picturing Hanako from Persona 4 whenever I hear her name, though.

— Two weeks later, this guy is still wearing the same ugly tie. Also, the storyboarding is really bad here. The background is literally just blank, horribly draw walls and doors. The perspective is all messed up too.

— Hirotaka starts reminiscing about his and Narumi’s younger days, but I thought childhood friends never win.

— Hirotaka: “You’re so slow at typing. Are you sure you’re an otaku.” He’s being a jerk, but he’s not wrong.

— Narumi: “And everyone I fall in love with is a jerk.” Well, Hirotaka would fit right in.

— The couple that farms rare mats together is the couple that stays together. It’s even better if your girlfriend can write scripts to bot these games… but shh, that’s unethical.

— The ED is better than the OP.